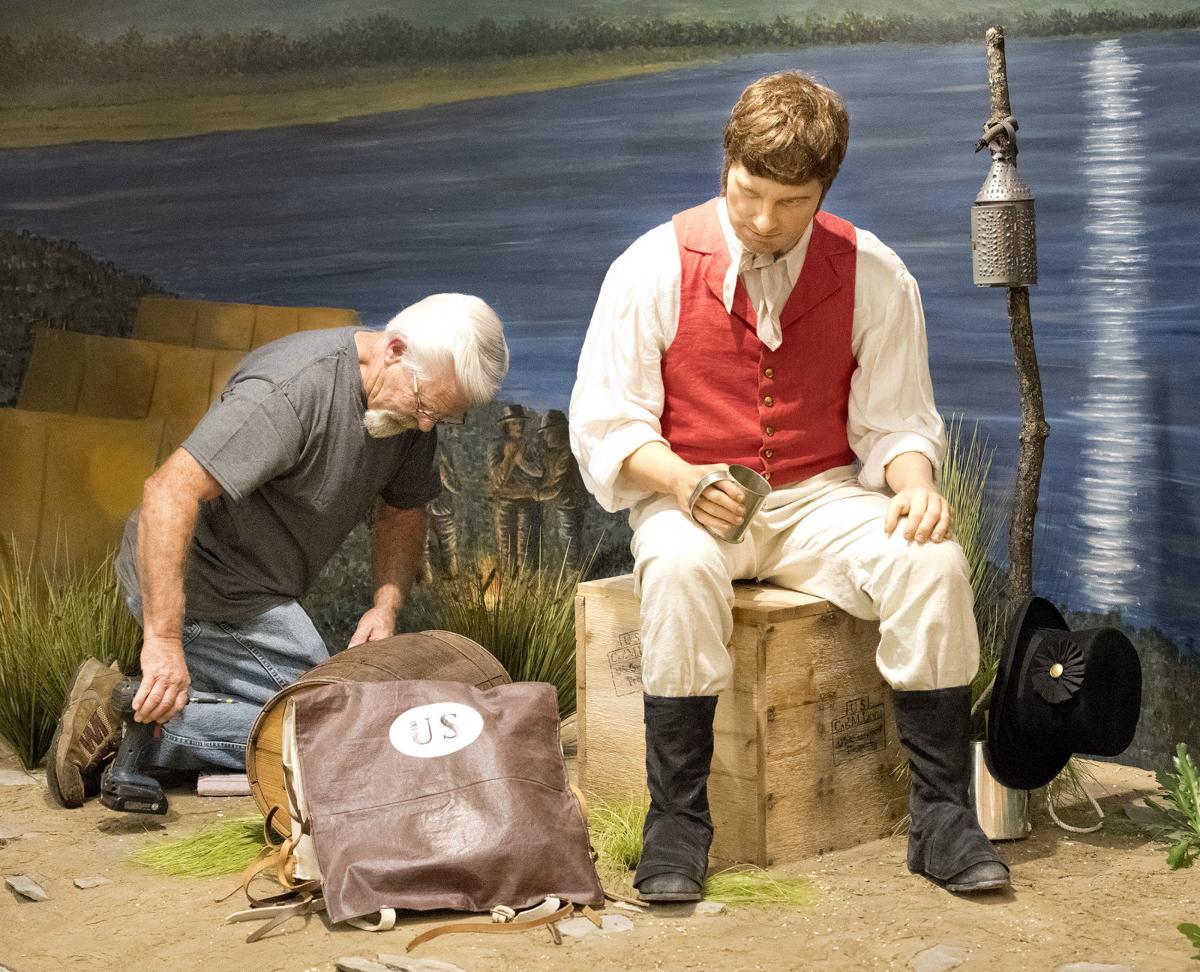 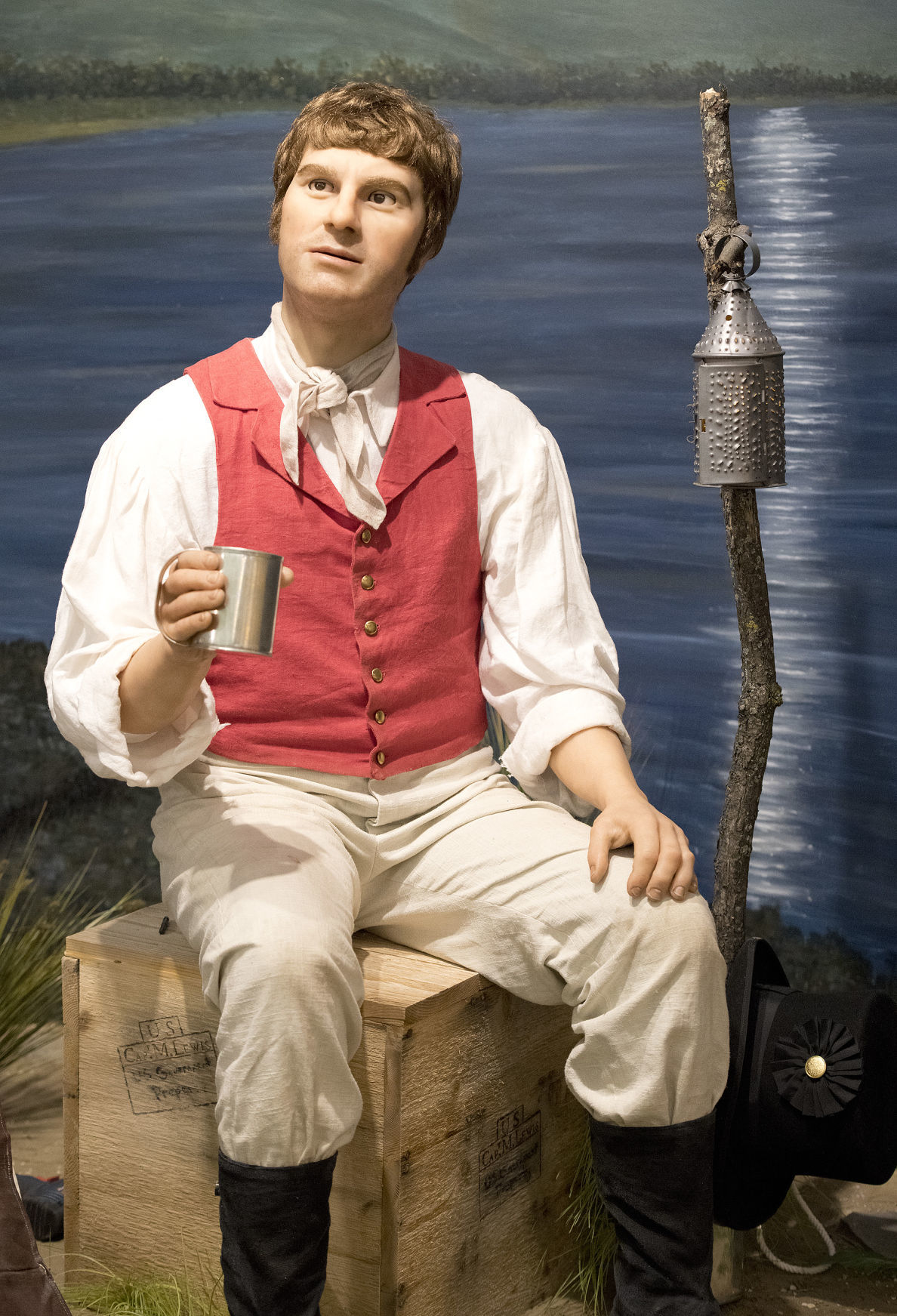 SIOUX CITY -- At the Lewis & Clark Interpretive Center, Sgt. Charles Floyd is alive and well, and shows no sign of the ailment that led to his death 214 years ago in Sioux City.

Instead of flesh and bones, this Floyd is made of silicone, and his pneumatic movements are controlled by a computer.

The interpretive center unveils its newest animatronic exhibit, “Sgt. Charles Floyd: A Young Man of Much Merit,” at 1 p.m. Saturday. It features a robotic Floyd, sitting on a crate near the river that today bears his name, telling visitors about his experience with the expedition led by Meriwether Lewis and William Clark.

Marcia Poole, the center's director, said it's unfortunate that Floyd is mostly known for his death and burial in what today is Sioux City on Aug. 20, 1804. Poole and Mike McCormick, the center's facilities manager, wanted to breathe some life into the legacy of the explorer and non-commissioned officer, who passed away at age 21.

"We know where he was buried, the Floyd Monument -- but what about him? He was this young man, obviously of great, great ability and strength," Poole said.

"In the writings of their group, he was a really well-respected guy," McCormick said. "I mean, these people put a lot of faith and trust that this young man could do that job. And sadly he died."

The Floyd automaton was built by Ohio-based LifeFormations, which has built robotic and diorama figures exhibited in places as diverse as the Abraham Lincoln Presidential Library and Museum, the Answers in Genesis – Ark Encounter & Creation Museum, Sony Theme Park and DreamWorks Theme Park, among others.

It's hard to say what the real Charles Floyd looked like.

Unlike the other figures depicted at the Center -- say, Thomas Jefferson -- there are few images of Floyd during his short lifetime. So the center had to take some artistic liberties to create his animatronic figure, which sports a light stubble on his face and sightly dirty fingers.

"(LifeFormations) provided us with a number of faces that they have available," McCormick said. The center then selected a face that they felt was suitable to represent Floyd.

The figure cost around $60,000. To help reduce expenses -- and put their own touches on the exhibit -- the diorama scenery was put together by McCormick.

A local resident, Matt Rixner, supplied Floyd's voice. Rixner said he worked to develop a dialect from Floyd's home state of Kentucky, and tried to make "as authentic as possible."

Rixner said he hopes to take his daughters to see Floyd when the exhibit opens Saturday.

What: Opening of “Sgt. Charles Floyd: A Young Man of Much Merit” exhibit

In the exhibit, the animatronic Sgt. Charles Floyd tells visitors the following story:

"My name is Charles Floyd -- one of three sergeants on the Lewis & Clark Expedition -- instructed by President Thomas Jefferson to find and map the Northwest Passage that will open our country to great prosperity.

It was August 1, 1803 -- I was 21 years old -- a constable, carrying mail between Louisville, Kentucky, and Vincennes, Indiana Territory, when Captain Clark recruited me -- one of the first three permanent members of the Corps of Discovery.

He and Captain Meriwether Lewis saw leadership ability and physical strength in me. They made me one of their three sergeants. Capt. Lewis later would call me a Young Man of Much Merit.

As a sergeant, I commanded a small squad of soldiers. I rotated the work on the keelboat and supervised basics of camp life. This freed the captains to work on the expedition's diplomatic and scientific objectives.

As a sergeant, I was required to keep a journal as a record of our voyage -- in case the captains' journals were lost.

I was proud to serve on this mission into the treacherous unknown -- to carry out my duties -- to abide by my Captains' orders to the best of my abilities -- to cooperate fully in reaching our destination: the Pacific Ocean.

With my own eyes, I would see the Pacific Ocean and encounter all wonder and hardship that lay before it. I would return home to tell the story.

I died of natural causes on August 20th 1804 -- here in this land -- just three months after our departure from St. Charles -- and more than a year before the Corps of Discovery saw the Pacific Ocean.

I would never tell the story."

SIOUX CITY -- There was the Sioux City spot that has historical significance, then there were the plain old fun options such as a specialty ca…

SIOUX CITY -- Marcia Poole's love of history was sparked later on in life, after she was hired to handle promotions and publicity for the open…