SIOUX CITY -- Artist Brenda Schoenherr-Thelen admits that in the days following her cancer diagnosis in June 2021 she thought her work could continue unabated. Primary peritoneal cancer wouldn't stop her from filling up canvasses, carving pumpkins or practicing calligraphy.

That notion lasted right up until chemotherapy became part of the picture.

Going through something as draining as chemo, which she receives at the University of Nebraska's cancer center, requires steroids to help recover. But that presents problems when Schoenherr-Thelen has to paint something like the annual Little Yellow Dog portrait.

"I’ve done this for 16 years and what’s interesting about this one is I’m on chemotherapy. Being on chemo I had to wait until the steroids wore off because my hands shake from the steroids," Schoenherr-Thelen said.

In total, it took Schoenherr-Thelen about 18 hours to bring Yukon, the Goldendoodle named the 2021 Little Yellow Dog, to life on her 11-by-14 canvas. Eighteen hours at her kitchen table, she painted a 10-week-old pup in a forested setting with about 30 different colors of acrylic. Typically she would meet the Little Yellow Dog but, this time out, she could only paint Yukon from what she saw of him in a picture.

"With cancer I’ve been staying in my house because my defenses are down so I had people mail me photos," Schoenherr-Thelen said.

That hasn't been the only change for the woman who turned 60 in October. She said that she also has had to give up the daycare business she ran for 30 years and had to stop teaching calligraphy and painting classes at the Sioux City Art Center.

"That makes me sick but I can’t just be around people. I miss the Art Center so much. It breaks my heart so much. It’s like a second home to me," she said.

"We certainly miss her good energy and I haven’t found a teacher who could replace her. I’m just waiting for the day she calls me and says: Debra I’m ready to come back," Marqusee said.

According to Marqusee, the kind of energy that Schoenherr-Thelen put into her teaching was so powerful that classes would often be full and the same folks would keep coming back. "She has a following," Marqusee said.

Though the two haven't been together at the Art Center in quite some time, Marqusee said they still keep in touch via Facebook.

Bruce Brock, an auctioneer who Schoenherr-Thelen met through the Little Yellow Dog event, said that he keeps in contact through texts.

"She’s a very caring person, obviously, to do all that for the people who win the Little Yellow Dog prize. And I don’t think she does it for the recognition," Brock said.

Given the circumstances, Brock said, this year's painting for the auction is even more meaningful than ones Schoenherr-Thelen did of Samantha the Maltese or Finnegan the Scottish Terrier.

"It speaks volumes to her caring nature that she was able to draw within herself that courage. She was up to the task," Brock said. Because of that kind of courage and strength, he said he expects her return soon enough.

And whenever Schoenherr-Thelen does make it back to the Sioux City Art Center, Marqusee said that, based on experience, she knows the longtime artist can handle whatever task she's given.

"Every time I would give her a challenge she would be nervous but she would accomplish it," Marqusee said.

For Schoenherr-Thelen, when her work schedule is dictated by what her body is telling her, art is therapy as much as anything else.

"I start painting and get lost in the painting and I can paint for hours and not realize it’s three in the morning," she said.

Jared McNett is an online editor and reporter for the Sioux City Journal. You can reach him at 712-293-4234 and follow him on Twitter at TwoHeadedBoy98.

What's the going rate for a two-month-old, apricot-colored Goldendoodle named Yukon? Saturday's 86th installment of the Little Yellow Dog Auction answered that question with an emphatic: $18,500.

Late Friday morning, the Sioux City Community School District announced that it will have a two-hour early dismissal today, for all schools, in anticipation of the day's winter storms.

Yankton, S.D. had snowfalls during the day threatening to total six inches while Sioux City daytime figures were set at 2 inches.

Biden says US would defend Taiwan if China invaded

Biden says US would defend Taiwan if China invaded 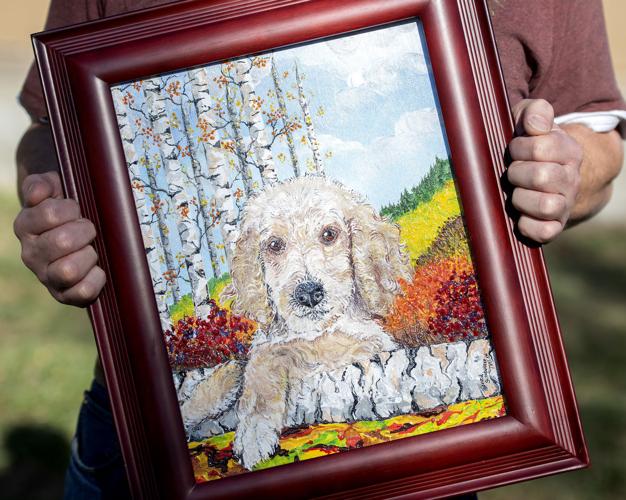 A painting of Yukon, the 2021 Goodfellows Charities' Little Yellow Dog, is the latest from Sioux City artist Brenda Schoenherr-Thelen, who has painted portraits of the past 16 Little Yellows Dogs. 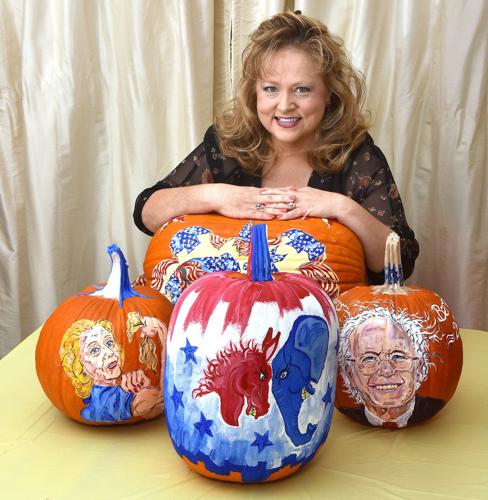 Artist Brenda Schoenherr-Thelen was featured in Siouxland Life magazine in 2015 with a collection of politician-themed pumpkins she has painted.