Brent Mahrt, left, and his son, Garrett, of Frisco, Texas, and originally from Anthon, Iowa, roll down the cover on their pickup after buying a truck-load of fireworks Thursday at King Kong Fireworks along US Highway 20 east of Sioux City. 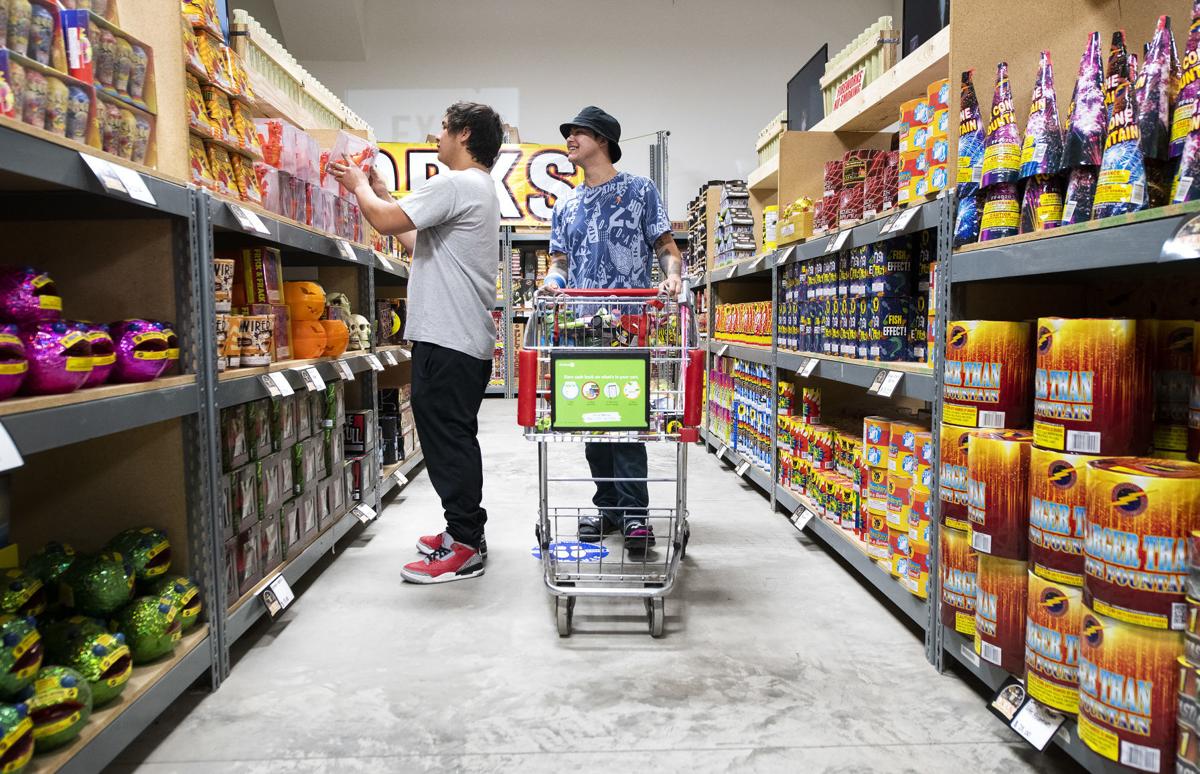 Anthony, left, and Alex Keokenchana of Sioux City shop for fireworks Thursday at King Kong Fireworks along US Highway 20 east of Sioux City.

SIOUX CITY -- Fireworks dealers in the Sioux City metro reported solid sales and demand as the Fourth of July approached.

Months of pandemic-induced boredom has been cited as a driving factor in consumers' interest in fireworks this summer. It also doesn't hurt that the Fourth falls on a Saturday this year.

"This year, sales are on fire -- they're doing really well," said Jerry Peterson, proprietor of King Kong Fireworks on the eastern outskirts of Sioux City.

"You might have a lot of neighborhoods coming together to do a show on their own, or families buying together," said Vince Bellino, whose Papillion, Nebraska-based company, Bellino Fireworks, operates seven tents in Sioux City and one in South Sioux City.

If fireworks complaints in the city can be taken as an indicator of fireworks sales, the numbers are high -- complaints jumped 80 percent for the month of June compared to last year, according to Sioux City Police Department data.

This will be the fourth Fourth of July in which fireworks can be legally discharged by private residents in Iowa (subject to some restrictions). Most fireworks were banned in the state from 1938 until the summer of 2017; the ban was the result of highly destructive fires in 1931 and 1936 that were blamed on fireworks.

Peterson suggested that the novelty of legal fireworks still hasn't worn off.

Interest in fireworks has not waned for Brent and Amy Mahrt, who make an annual Fourth of July trip from their home in Texas to visit relatives in Anthon, Iowa. On Thursday, their fireworks purchases at King Kong filled the bed of their pickup.

There was no guarantee this summer would go well for fireworks retailers, as the industry was haunted by supply-side problems in China in the months leading up to the season.

In early December, an explosion at a fireworks factory in Hunan Province killed seven and injured more than a dozen. Very soon thereafter, a new virus emerged in the city of Wuhan, and it quickly crippled Chinese manufacturing as strict lockdowns and quarantines took hold.

Those in the fireworks business in the Sioux City area offered different opinions about which of these catastrophes was worse for the fireworks industry. (None of them suffered any apparent product shortages.)

"They wouldn't let any factories open up, and nobody wanted to go to work, because they didn't want to die," he added.

Bellino, meanwhile, said the explosion was a bigger cause for concern over possible fireworks shortages.

"(The explosion) happened in late November, so that's kind of peak production season, and that just kind of put it to a halt," he said.

A number of Siouxland communities are planning public fireworks shows to celebrate Independence Day. Here’s where you can go to watch the displays.

From June 1 to the afternoon of June 29, 306 complaints had been logged with the department, an increase of 136 complaints from June 2019.

July 4 fireworks displays in Sioux City metro: Some are going ahead, others uncertain

Many events associated with the displays, including Sioux City's Big Parade and Mardi Gras Festivale, have been canceled due to the pandemic.

The parade had roughly half the number of floats compared to a normal year, but included firetrucks, tractors, classic cars, riding lawnmowers and all-terrain vehicles, a big inflatable Santa Claus on a float, horses and at least one boat.

Moville Fire and Rescue chief Jerry Sailer said the homeowner reported flames in a bedroom when calling in the fire. When firefighters arrived, no flames were visible, but the bedroom was still smoldering.

Brent Mahrt, left, and his son, Garrett, of Frisco, Texas, and originally from Anthon, Iowa, roll down the cover on their pickup after buying a truck-load of fireworks Thursday at King Kong Fireworks along US Highway 20 east of Sioux City.

Anthony, left, and Alex Keokenchana of Sioux City shop for fireworks Thursday at King Kong Fireworks along US Highway 20 east of Sioux City.