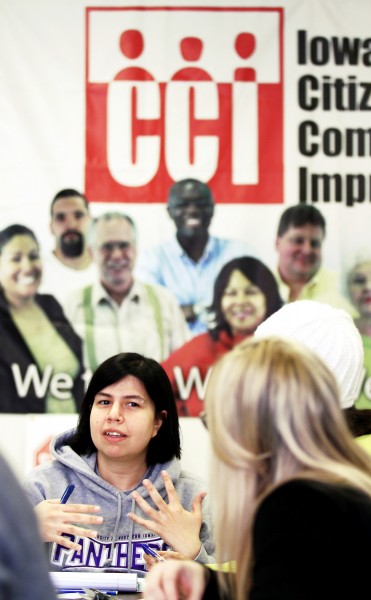 Citizens for Community Improvement staff member Vanessa Marcano talks about legislative issues March 1 in the organization's Des Moines office. The group, which traces its roots to 1976 in Waterloo, Iowa, has become a vocal force in state politics, although some question the methods. 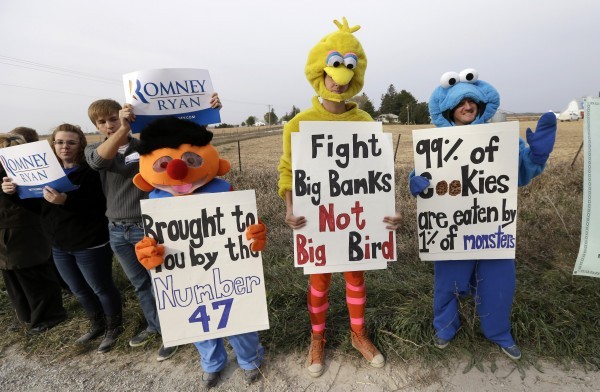 Iowa Citizens for Community Improvement members dressed in Sesame Street costumes protest outside a campaign stop for Republican presidential candidate Mitt Romney in October in Van Meter, Iowa. The organization, which has a $1 million annual budget, is working to becoming a powerful force in Iowa, although there are detractors. 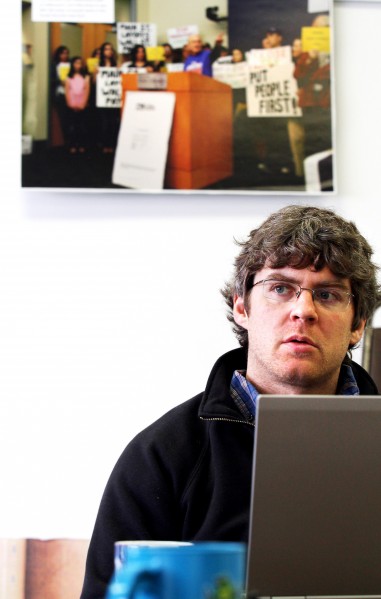 "Corporations are people, my friend," the presidential hopeful, who would become Republican nominee, told a heckler at the 2011 Iowa State Fair. It was a line that would be used to characterize Romney as an out-of-touch rich guy for months to come.

And it was a feather in the cap of Iowa Citizens for Community Improvement, a group that prides itself in continuing the tradition of the prairie populists who helped bust the trusts in the 1890s.

The agitator who goaded Romney into making the comment was Joe Fagan, a longtime activist and one of several CCI members who were in the crowd watching Romney sweat in the August sun.

Romney "looked right at me when he said it," said Hugh Espey, CCI's executive director since 2003. "I smiled."

CCI members have dressed up as "Sesame Street" characters to protest proposed cuts to public television, they've chained themselves together outside Wells Fargo in Des Moines, locked arms on the Statehouse lawn as state police went in for arrests, protested outside of private homes of Republicans and Republican supporters and blocked the doors at state Democratic Party headquarters.

Now with an annual budget of almost $1 million, a new super PAC and plans to hire more staff this summer, Citizens for Community Improvement looks to play an even bigger role in the years to come.

"I don't know how powerful they are," said Chris Larimer, an associate professor of political science at the University of Northern Iowa, "but they are certainly the loudest."

But during a recent Friday morning at their office headquarters at Martin Luther King Drive and Forest Avenue in Des Moines, the six CCI organizers sitting around a conference table are calm and jokey.

Poster-size photographs of past protests and community rallies hang on the walls of the room, which looks like it was set up to be a storefront. There's a schoolroom size whiteboard with erasable marker scrawls marking out the "Legislative Agenda" for CCI, which includes Medicaid, factory farms and voter ID proposals.

They're going over their Statehouse successes, failures and to-be-determineds of the past week and setting up for the upcoming week as they chat around a conference table. The successes include holding a webinar with state Sen. Jack Hatch, D-Des Moines, on health care and getting 90 signatures to state Rep. Greg Forristall, R-Macedonia, supporting anti-wage theft legislation.

According to tax forms that every nonprofit has to file, wages and benefits for CCI staff take up more than half of the group's annual budget.

More than half of that money comes from foundations, followed by individual gifts and dues paid by the 3,200 members representing all 99 counties in the state. Churches are the third-largest supporter of CCI's activities.

It's not a lot of money, particularly when compared to the kind of salaries top lobbyists pull down. CCI's confrontational style also makes its organizers more likely to catch a trespassing or obstruction case than the folks in power ties and shiny shoes or pearls and pantsuits who mingle in the Statehouse's lobbyist lounge.

So why, Goodner is asked, hook up with CCI instead of a lobbying firm?

'NO PLACE IN A SERIOUS DEBATE'

Espey has no qualms about the group's tactics. What some see as over-the-top, he sees as a way to level a lopsided playing field.

The tactics can infuriate targets and allies alike.

Last fall, CCI members picketed the home of Republican strategist Nick Ryan's ex-wife, even though Ryan didn't live there. Nonetheless, the protest apparently frightened Ryan's 9-year-old son to the point of tears. Espey later said that it was a case of mistaken address, and he said no one was home.

"I think they're repugnant. They exhibit boorish behavior," Ryan said. "Demanding an apology is tantamount to saying that they have influence. They don't."

Board of Regents Vice President Bruce Rastetter, a frequent target of CCI's protests along with his brother, Brent, said he doesn't understand the animosity or the tactics.

"My brother and I grew up on a small, 320-acre farm. We've been able to give back to the state in a significant way," Bruce Rastetter said. "I just try to focus on the positive and not on their negative attacks."

Even former Democratic Party Chair Sue Dvorsky called CCI's behavior "unproductive, embarrassing and has no place in a serious debate" when some members block U.S. Sen. Chuck Grassley's path to his car after a 2011 town hall.

But, Dvorsky said, she sees the group as a valuable ally in pushing a progressive agenda, even if she doesn't always agree with its tactics.

Danny Homan, president of the American Federation of State, County and Municipal Employees, Council 61, said CCI is a "valuable partner." The 20,000-member organization is the state's largest employee union.

"We both share a common commitment to making sure that Iowa's working families get a fair shake," Homan said.

Dvorsky said CCI is like an individual car in a long train of allied interests.

"Each separate car is different, but we are all moving in the same direction," she said.

Espey maintains CCI is democratic, small "d," and not an arm of Democratic Party.

"Sue Dvorsky and (Attorney General) Tom Miller, big-time Democrats, have criticized our tactics, sure. What we say to them is, 'We want you to govern as you campaign,'" Espey said. "We're going to challenge the Democratic leadership when they start caving in on issues like Social Security, Medicare and Medicaid."

He said people who put their work in terms of Republicans versus Democrats don't get it: It's not about party or politics. It's philosophy.

Although its brand of protest goes back more than a century, Citizens for Community Improvement traces its direct roots to the summer of 1976 in Waterloo, Iowa.

A group of four Catholic priests — Joe Fagan being one of them — started to push back against "redlining" in the home loan industry and how the city under Mayor Leo Rooff was spending federal housing block grants that were supposed to be spent in low- and moderate-income neighborhoods.

From there it was an easy move to join with farmers against banks during the Farm Crisis in the 1980s. Now, CCI works on issues ranging from the environment to pay-day loans and immigrant rights.

Their in-your-face tactics haven't changed much since the summer of '76.

"This is what we do," said Executive Director Hugh Espey, pointing to a poster-size photograph of people holding signs demanding an end to polluting factory farms that hangs on a wall in CCI headquarters in Des Moines.

"But so is this," he added, pointing to a picture of CCI members talking to Rep. Jack Drake, R-Griswold, at the Statehouse.

"One brings the attention to the issue, the other helps us advance the issue," Espey said. "We need to do both."

A roundup of legislative and Capitol news items for Friday:

Iowa Democratic lawmakers calling for a minimum wage hike are inviting Republicans to join the debate, but so far it’s been more dueling monologues than discussion.

DES MOINES | A measure that might prohibit Iowa Board of Regent member Ruth Harkin from attending a steak fry hosted by her husband, Democrati…

It appears little has changed since the last time the House Ways & Means Committee took up a property tax relief plan.

DES MOINES | Policies and procedures of the state Board of Regents were put under the legislative microscope Wednesday, with opposing forces c…

Citizens for Community Improvement staff member Vanessa Marcano talks about legislative issues March 1 in the organization's Des Moines office. The group, which traces its roots to 1976 in Waterloo, Iowa, has become a vocal force in state politics, although some question the methods.

Iowa Citizens for Community Improvement members dressed in Sesame Street costumes protest outside a campaign stop for Republican presidential candidate Mitt Romney in October in Van Meter, Iowa. The organization, which has a $1 million annual budget, is working to becoming a powerful force in Iowa, although there are detractors. 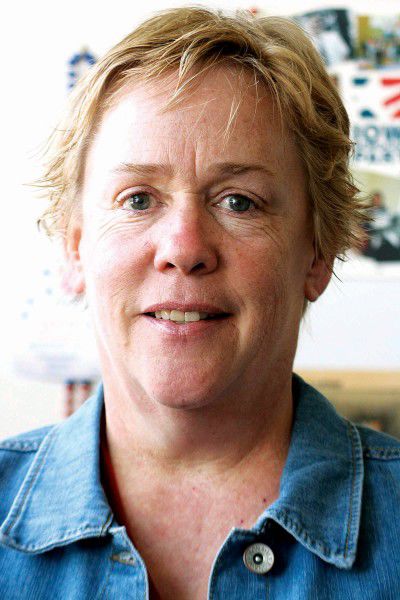