During a public meeting Wednesday at the Crossroads Pavilion Event Center in Sheldon, Navigator CO2 Ventures officials said the pipeline would pump $25 million in property tax revenues into Iowa and also add value to ethanol produced at facilities that have agreed to provide gas produced at those plants to the pipeline.

"As a farm kid myself, I'm really excited for the potential this project has for agriculture," said Elizabeth Burns-Thompson, vice president of government and public affairs for Dallas-based Navigator CO2 Ventures, owner of Navigator Heartland Greenway, which has proposed the $3 billion, 1,300-mile Heartland Greenway pipeline. Of that investment, Burns-Thompson said, $1.6 billion would be in Iowa, which also would see 50 permanent pipeline-related jobs.

The pipeline would run approximately 900 miles through 36 Iowa counties, including Woodbury, Plymouth, Lyon, Osceola, O'Brien, Cherokee, Clay, Dickinson and Buena Vista. A map shows the pipeline skirting Sioux City on the east and south sides and extending into Nebraska, where it would run through Dakota, Dixon and Wayne counties.

If approved, the pipeline would collect carbon dioxide from ethanol plants and fertilizer processors in Iowa, Nebraska, South Dakota, Minnesota and Illinois, convert it to liquid form and transport it under high pressure to a site in Illinois, where it would be pumped thousands of feet beneath the surface and become a solid mineral over time. The company says it would sequester up to 15 million metric tons of carbon dioxide annually, the equivalent of emissions from approximately 3.2 million cars.

Burns-Thompson told the approximately 150 people who attended the meeting that 20 providers have agreed to pay Navigator to pipe CO2 from their facilities, including eight ethanol plants owned by Valero, which operates a plant in nearby Hartley. Burns-Thompson said that by increasing the amount of CO2 they capture and store, ethanol plant owners can become eligible for certain federal tax credits and low-carbon fuel programs, expanding their markets and ensuring their plants' futures.

Several landowners questioned the pipeline's safety and who would be liable for damages to their property during construction and any future pipeline breaks. 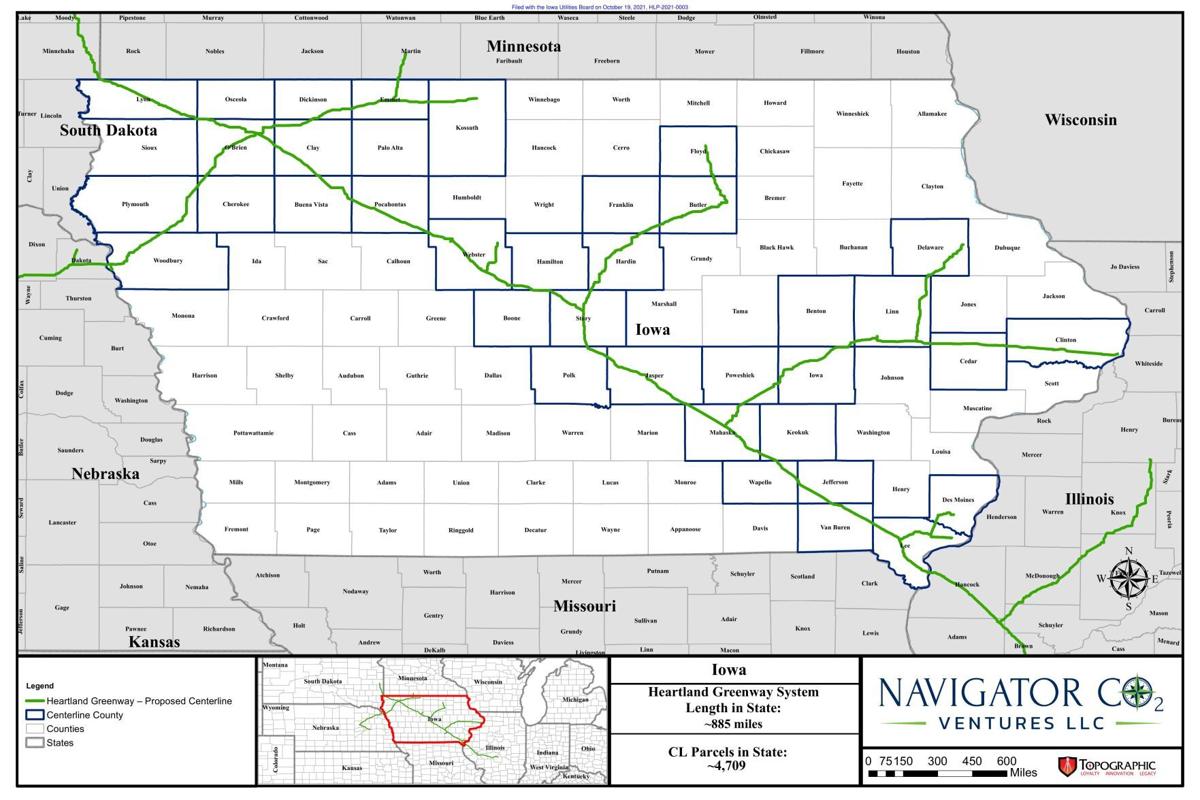 Navigator is seeking easements in which they would install pipe ranging from 6-24 inches in diameter at least 5 feet deep. Steve Lee, Navigator's vice president of engineering, said the pipeline would contain redundant control systems to detect leaks and ruptures, and the company would pay for property damage during construction or leaks. He said the company continues to study ideal setbacks from homes and properties to minimize health risks.

"At high concentrations, it is hazardous," Lee said.

One landowner said his home was a quarter mile from the proposed route.

"If this thing ruptures, would you want your family there?" he asked.

"I would have no problem with it," Lee said.

Other landowners questioned the need for CO2 storage and if it was part of an environmentalist agenda.

"Is this current environmental jargon training?" one woman asked. "My concern is people just going along with people saying it's necessary."

Burns-Thompson said CO2 storage is being sought by industries to decrease carbon intensity in the atmosphere.

"This isn't some political movement that says this will provide the golden key to solve a particular problem," she said.

Conducted by the Iowa Utilities Board, the meeting was the fifth in a series of meetings that will take place in every Iowa county through which the pipeline would pass. Meetings began Monday and have taken place in Sioux City, Le Mars, Rock Rapids and Aurelia. They are the first step in the process to gain a hazardous liquid pipeline permit from the IUB.

Navigator may begin negotiations with landowners for easements once a meeting has been conducted in each county.

Once meetings have been held in all counties included in the proposed route, Navigator may file a petition for a pipeline permit with the IUB., which will then receive evidence and schedule public hearings before deciding to grant or deny the permit.

If a permit is granted, Navigator hopes to begin construction in 2024 and operations in early 2025.

Navigator is the second company to propose a CO2 pipeline through Siouxland. In September and October, Midwest Carbon Express conducted public meetings in Iowa for a proposed $4.5 billion, 2,000-mile pipeline that would transport liquefied CO2 from ethanol plants in Iowa, Nebraska, South Dakota, Minnesota and North Dakota to a North Dakota injection site. That pipeline would pass through many of the same counties as the Navigator pipeline.

So you can read through recent Journal coverage of the ongoing CO2 pipeline debates, we put together a collection of some of the biggest stories.

2nd proposed carbon capture pipeline in Siouxland could come in 2025

LE MARS, Iowa -- Developers of a proposed pipeline that would carry carbon dioxide gas through Siouxland each year touted the project's safety… 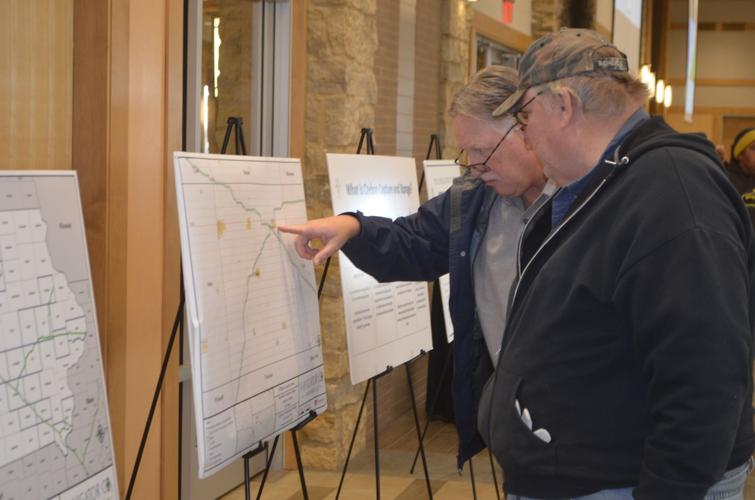 Shawn Schroeder, left, of Sanborn, Iowa, and Jim Hattermann, of Paullina, Iowa, look at maps of the proposed route for the Heartland Greenway CO2 pipeline route through O'Brien County on Dec. 1 in Sheldon, Iowa. Multiple carbon dioxide (CO2) pipelines are proposed to run through Midwest states, with the goal of capturing the carbon from these plants. 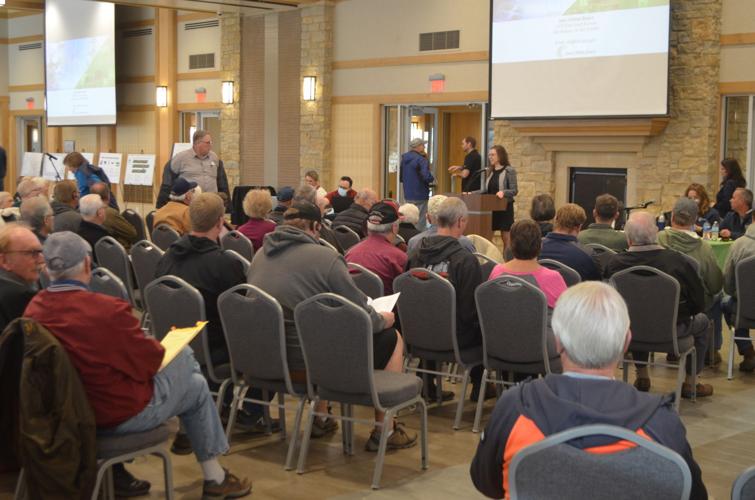 Gail Beech, an Iowa Utilities Board attorney, gives a presentation Wednesday on the proposed Heartland Greenway CO2 pipeline in Sheldon, Iowa. Landowners were able to ask questions of officials with the company that has proposed the pipeline, which would pass through O'Brien County and other counties in Northwest Iowa.