SIOUX CITY -- Mark Treft raced through a verbal list of all the Siouxland cobblers he knew who have closed businesses over the last few decades, citing those in the nearby cities of Sheldon, Carroll, Sac City, Denison, Kingsley and Tekamah, along with many more.

Then Treft, the last known cobbler in Sioux City, and within about a 70-mile radius of the city, went through the list of those that had closed in the metro since his youth. Gone are cobblers who worked by the former St. Joseph Hospital, in the Riverside neighborhood, along 21st Street, in the downtown Younker's building basement and in South Sioux City.

Speaking on a January afternoon, Treft said some days are rife with stops by customers who bring in boots and shoes for repairs, while other days have fewer patrons. He gets many thank-yous from the customers for offering a service that doesn't exist across large swaths of the map.

"I hear that pretty much every day," Treft said, in a back workroom filled with assorted hammers, awls, jerk needles and heavy wax thread.

One such appreciative customer was Damon Picotte, of Winnebago, Neb., who wore a pair of boots he wanted Treft to consider repairing. Lifting a leg to show the boot degradation, Picotte said Treft had very ably previously repaired other boots for him.

"(He) is very professional. It stands up to the elements. He is a great leathersmith," Picotte said.

With that comment, Picotte referenced the broader nature of Treft's 4T Tack and Boot shop in Transit Plaza. The business also offers repairs to leather saddles, bridles and the like. The work load is always challenging, as the footwear is lined up on shelving for the next one he'll pull off to repair, back in the workroom. More to the middle of the store, a bevy of saddles fill up one section.

"I am almost always behind," Treft said, so it is frequent for people to get their footwear back a few weeks later, which they seem to willingly accept.

There is a need to be skilled with fingers and know how to improvise when the case calls for it. Treft pondered what makes a good cobbler, then offered, "You have to pay attention."

He added that a lot of people drop off a product, saying it likely needs a basic stitching.

"There is no such thing as a simple stitch. It always leads to something else," Treft said knowingly.

About 40 percent of the repairs Treft does are done by hand, with the rest with the assistance of some impressive looking machines, with several coming from Germany. There is a Dorkopp Adler machine, one called a Heel Wheel and a sole stitching unit that dates to 1964.

Treft grew up in the Greenville neighborhood of Sioux City, riding horses, so he's had a lifetime of knowing their leather accoutrements. He got his first pair of boots when attending McKinley Elementary School, but didn't become a cobbler until decades into his life.

While attending East High School in the mid-1970s, he began work at the Hinky Dinky grocery store. After some years of that, Treft worked for International Harvester, then became an over-the-road trucker for about 30 years, at which point, "The wife and kids wanted me home."

"I was kind of talked into it. My cousin had the equipment, he was a farrier," Treft said, so he bought it.

Treft thought he would only focus on saddles and bridles, but then saw he had the skills to become a cobbler. Today, he also makes leather pistol holsters and even cell phone holders.

4T Tack and Boot, which opened in 2005, is located next to other Transit Plaza stores that include Flowerland, Vac Shack, Mom's Thrift Shop and Anytime Auctions. Treft works morning and afternoon hours on Tuesday through Saturdays, then takes two days off.

Treft said the next closest cobblers are in Yankton, South Dakota, and Storm Lake, Iowa. Back in 2006, when closing the Cobbler's Bench in downtown Sioux City after 38 years, master cobbler Dick Stevens said it was due to a "throw-away society," where shoes were no longer made well enough to warrant being repaired.

Treft agreed some shoes and boots are made more cheaply today, with less sturdy shoes and soles, so there is no point in repairing them. But for other boots and shoes, he is more than skilled to replace a heel or sole, or to sew up the back portion by the heel.

He said a lot of people don't know that in a good shoe, the heel and sole are separate pieces. People wear out heels first, and for boots, a good pair can get two heel repairs before the sole needs attention.

For shoes or boots, if there is a need to address both the heel and sole, those tasks can be finished within 2.5 hours. Some of that might involve some time for glue to dry, beyond what's done with Treft's dexterous fingers.

Treft used to advertise in a variety of formats, but now sees there is sufficient word of mouth to direct customers to the business. He works about 45 to 50 hours a week, but acknowledged he's less likely to work into evenings these days.

Treft turns 63 in February, and has allowed himself to think about how much longer he'll operate as a cobbler owning 4T Tack and Boot. He said he'll continue for at least a few more years, and if he closes up, that could mark the end of the cobbler era in Sioux City.

"There is nobody else around to do this," he said.

Sheldon cobbler steps toward retirement after decades in shoe business

15 years later, what did Iowa's 'Great Places' do for Sioux City?

Forecast shift: Snow by Christmas after all for Siouxland

Sioux City is expected to receive snow from the mid-morning Wednesday through late afternoon.

This week’s On Iowa Politics podcast focuses on the end of 2020, the arrival of COVID-19 vaccines and the approaching 2022 elections.

Freshman Jose Hernandez said, "Since (Biden) is talking about (unity) a lot, I think he wants to deliver on his promise."

District Superintendent Paul Gausman said the virtual school will be "an independent enrollment center that offers virtual learning for students in grades K-12.

10 deaths cited from COVID-19 in NW Iowa, Woodbury County closes in on 200

After a late autumn 2020 spike when there were single days with 100 or more cases in Woodbury County, virus positivity rates and hospitalizations have stabilized in Siouxland over the last several weeks.

Through 10 election cycles and thousands of bylines, Bret Hayworth has helped guide Siouxland residents through the news for nearly two decades. Now, it's time for a farewell.

The board unanimously supported the resolution.

"She was one of my best friends for 30 years...I will miss her patience, advice and wicked sense of humor. She was a once-in-a-lifetime friend and colleague," said Carla Hubert, a colleague of Cherie Dandurand at Woodbury Central Middle School. 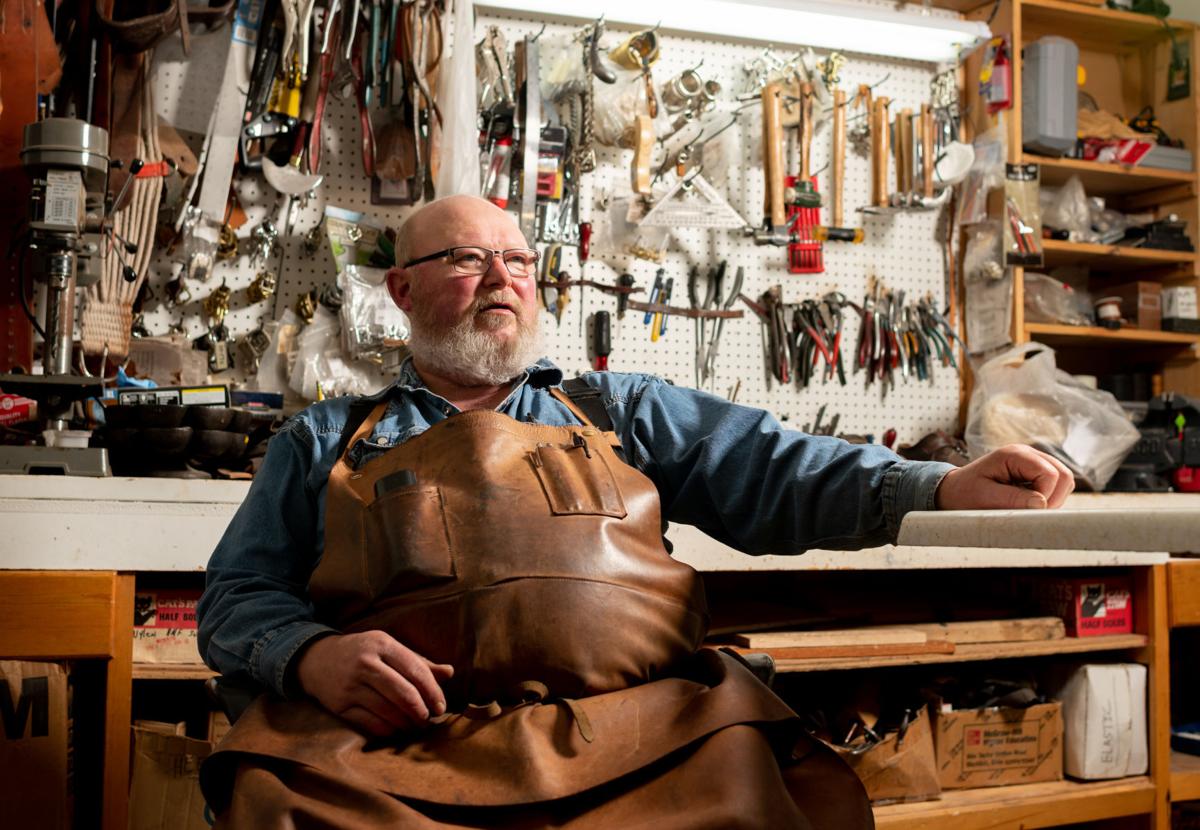 Mark Treft sits in his 4T Tack and Boot workshop Wednesday in Transit Plaza. Treft, who repairs shoes, boots, saddles, and other leather equipment, is the last known cobbler in Sioux City. 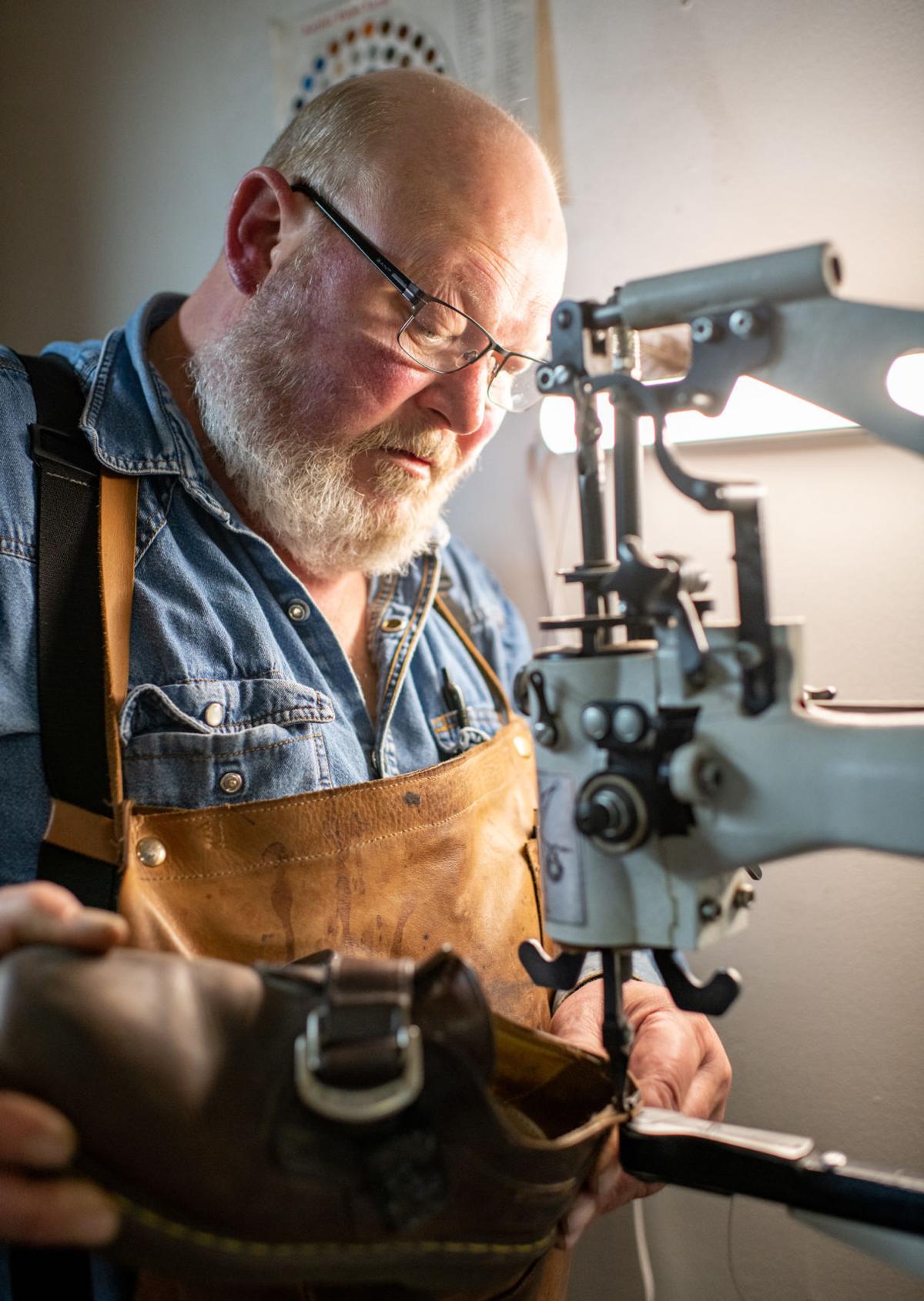 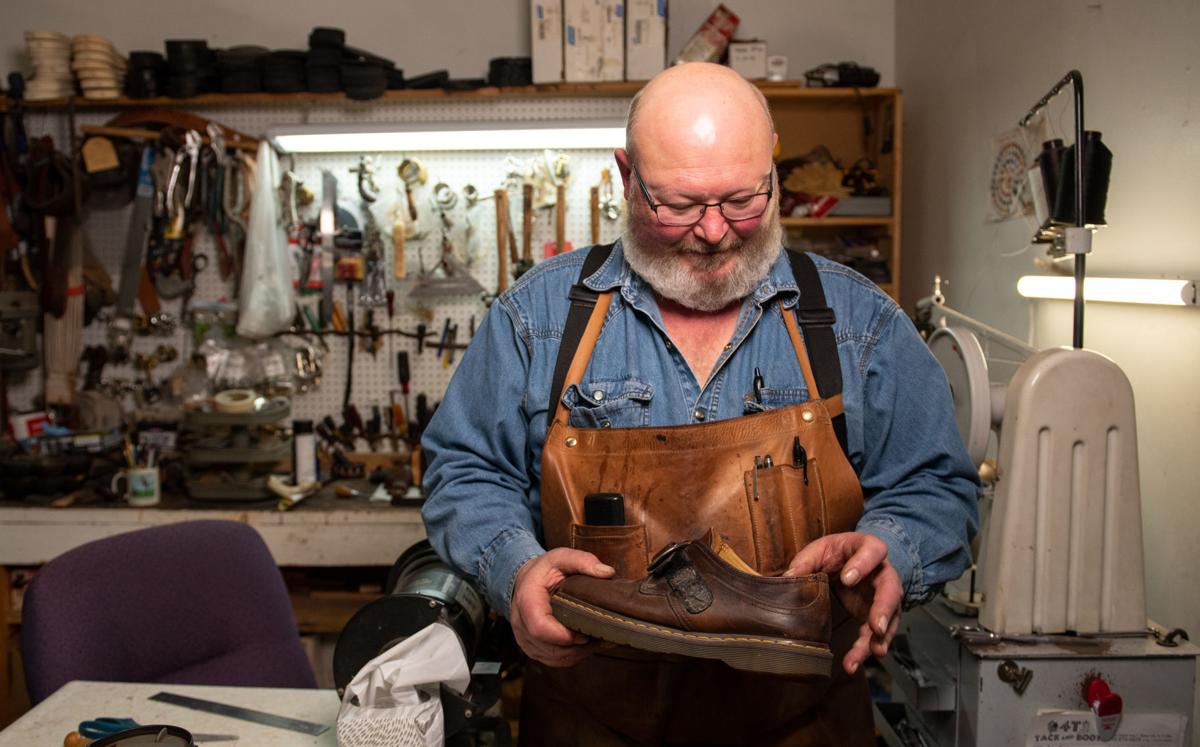 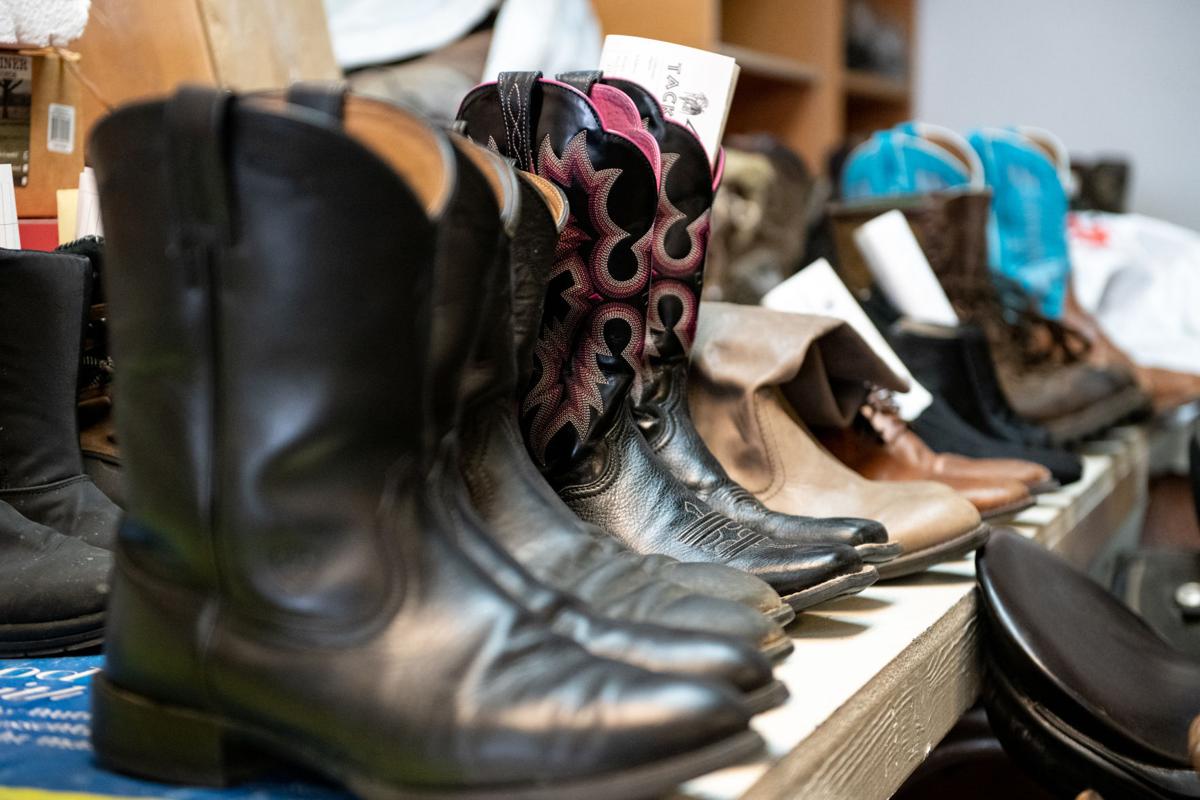 A row of boots and shoes wait to be repaired at Mark Treft's shoe repair shop in Transit Plaza, Wednesday, in Sioux City, Iowa, Jan. 13, 2021. 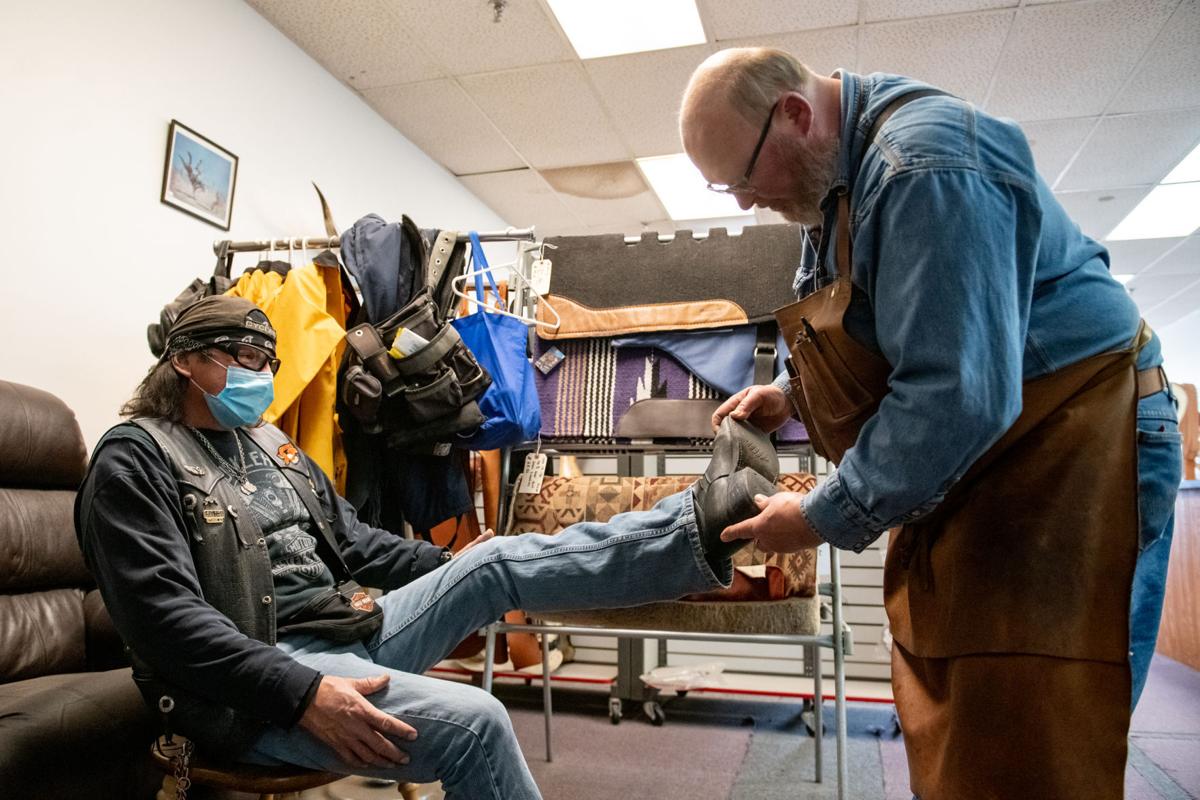