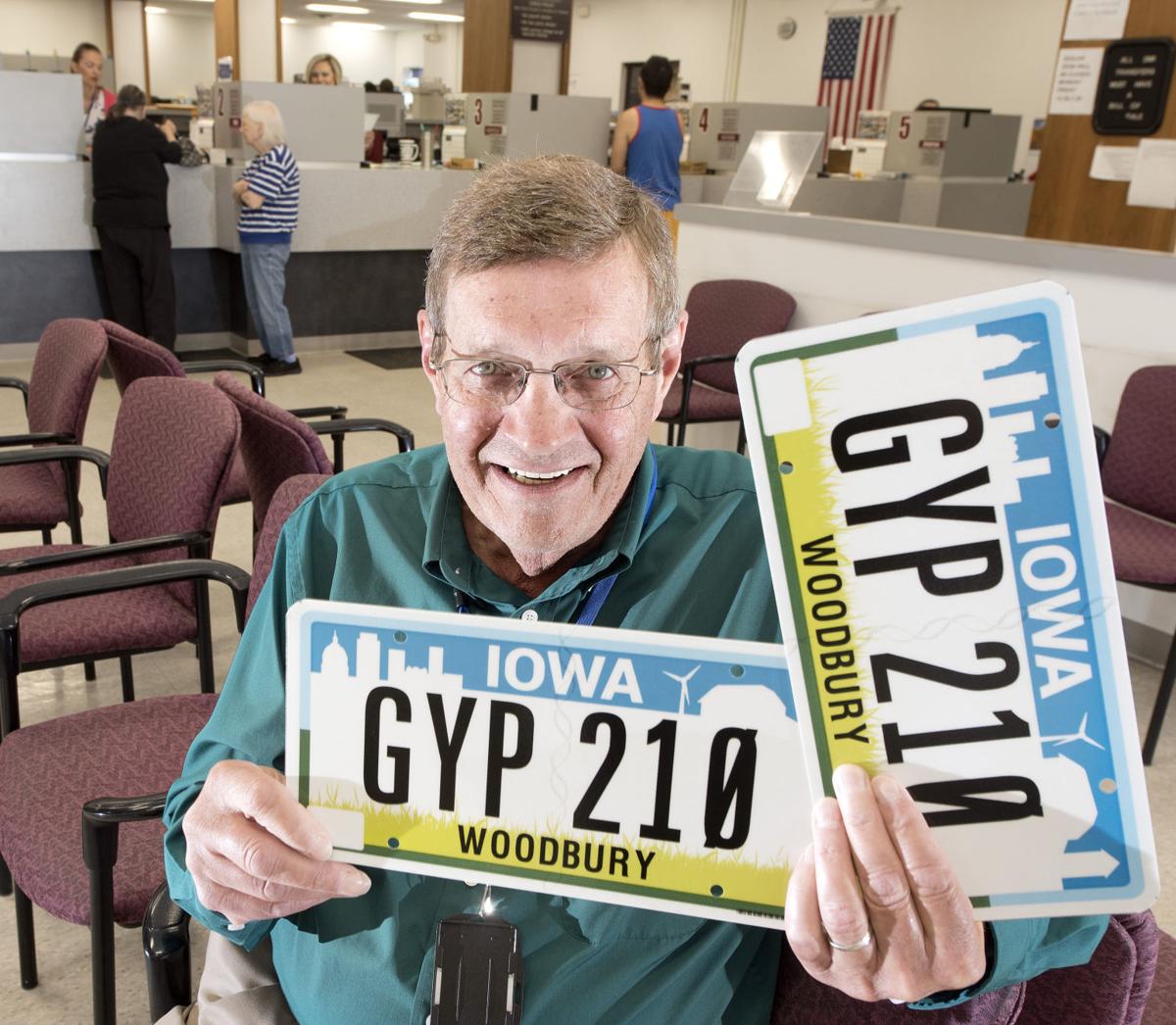 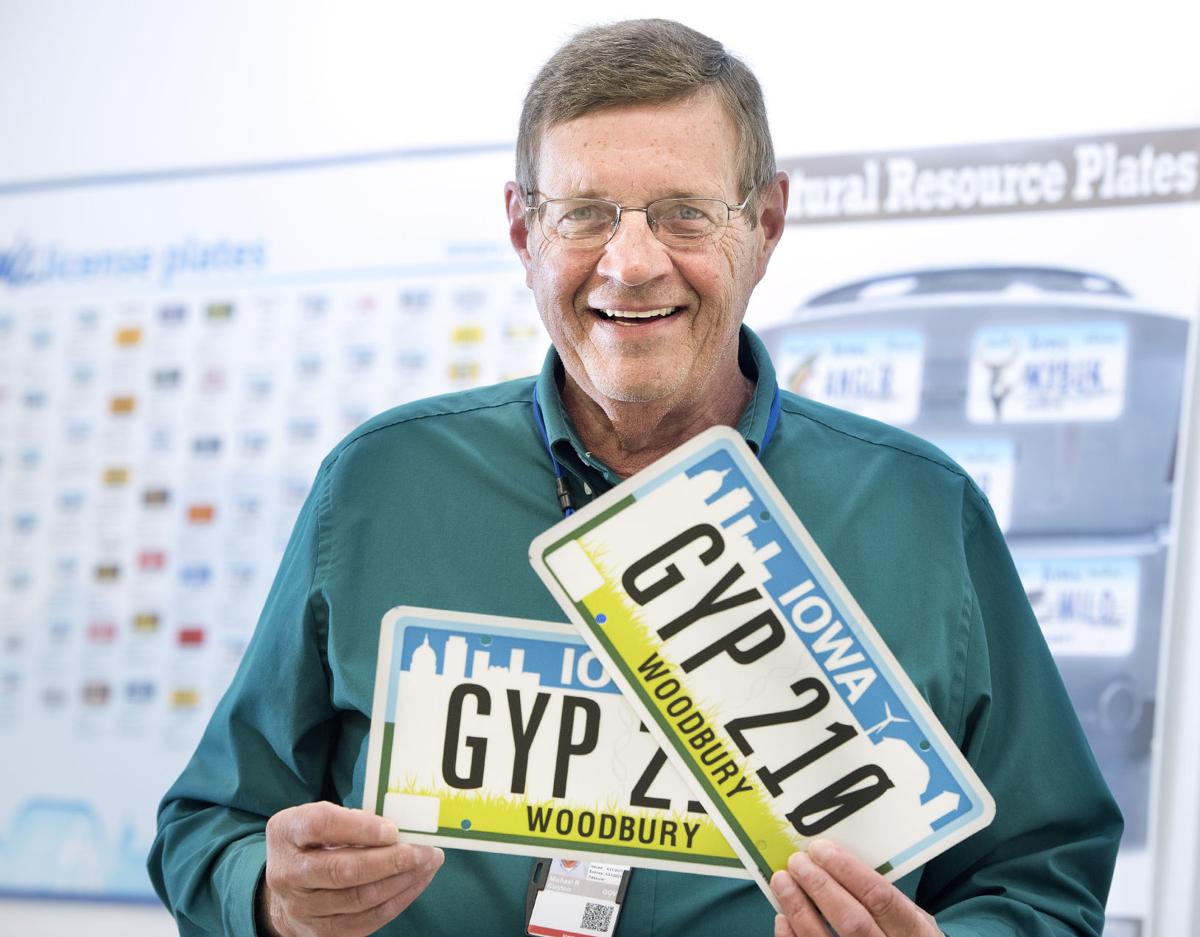 SIOUX CITY -- That's not a mistaken impression when driving past another car at 65 mph: Yes, there are some new license plates in Iowa.

They're the first new standard plate option in two decades, first issued by the Iowa Department of Transportation in April. Drivers will get the new versions in phases over 10 years, but people who want the plates on their vehicles now can pay $5 extra upon renewing their registrations at county treasurer offices.

Some are trickling out into the state.

The lot at the Lewis and Clark Interpretive Center in Sioux City on Wednesday was full of 40 vehicles from Iowa, and none had the new plates. Visiting the site, Rex Towns, of Sioux City, said he had not seen any of the new style, but he gave a thumbs up when shown the design.

"It is not that much different, to me. I like it. I like the Woodbury County being highlighted... It is easier to read," Towns said.

Heather Erickson, of Sioux City, said she didn't have strong feelings about the new plates. She said the plates certainly aren't as plain as the prior version.

Back in August, Gov. Kim Reynolds showed three plate design options at the Iowa State Fair. What has been called a “city country reboot" was selected later in the year by the Iowa Department of Transportation, after mulling feedback from the public and law enforcement.

The existing standard Iowa license plates (not including the specialty plates with options for universities, natural resources and activities) date to 1997. The new plate has art, with a metro skyline on one side of the word "Iowa,” and a windmill and farm on the other.

"The main purpose of license plates is to make the vehicle easily identifiable. We did quite a bit of testing to make sure the new plates serve that purpose well," said LaVonne Short, who heads the IDOT Office of Vehicle Services, in a release.

Short said to reduce costs, the state will "transition the new design into our existing plate replacement cycle." That includes new plates issued for newly bought vehicles, replacement plates for those that have reached 10 years, and plates issued to replace lost or damaged plates.

She added that treasurers statewide won’t issue the new version until the inventory of old plates in a county is gone.

The standard Iowa plate selected in 1997 accounts for about 4.2 million of the 4.4 million plates in circulation. The letters and numbers changed from blue to black in 2011, to improve visibility for law enforcement.

Inmates make about 10,000 plates daily at Iowa Prison Industries at the state prison in Anamosa.

The two other plates not selected included one modeled after Iowa’s flag with navy and red colors and a bald eagle in the middle, plus the so-called “great wide open” option with a blue stripe, rolling hills and shrubbery.

“The designs represent elements of what makes us Iowans,” Reynolds said last year. “We are patriotic. We are forward thinking. We take pride in our state’s natural beauty. And we embrace contributions from both the rural and urban areas of our state.”

OUR OPINION: Cast your vote for the new Iowa license plate

Whether Iowa kept the same license plate or changed to something different next year made no difference to us, frankly.

MILFORD, Iowa | Students of the University of Okoboji are majoring in fun.

SIOUX CITY -- Survivors of a mass shooting at a Parkland, Florida high school will stop in Sioux City Wednesday as part of nationwide tour cal…

SIOUX FALLS -- A Yankton, South Dakota, man has been placed on probation and fined for killing a bald eagle in 2016.