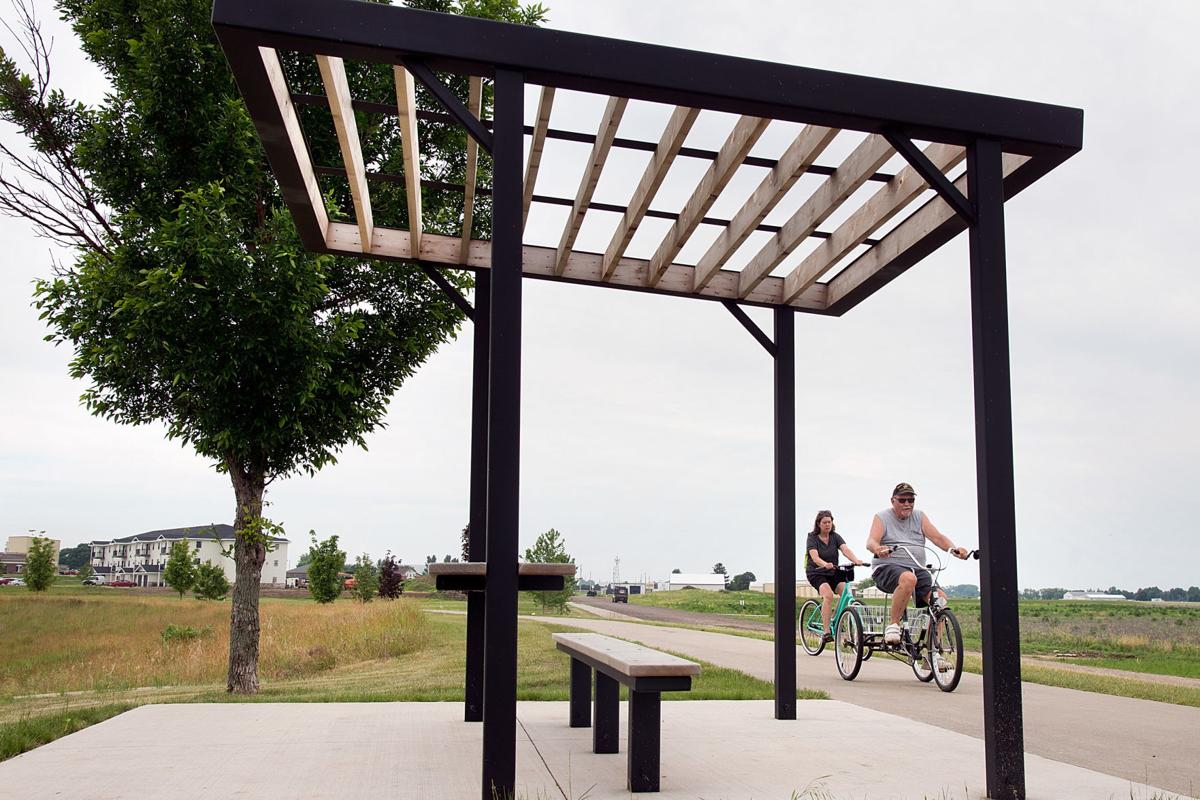 Laurie Gray of Le Mars and her husband Allen Gray ride bikes on Le Mars Recreational Trail in Le Mars, Iowa on June 15. The proposed PlyWood Trail would link Le Mars with Sioux City, with the 16-mile trail also passing through the cities of Merrill and Hinton. 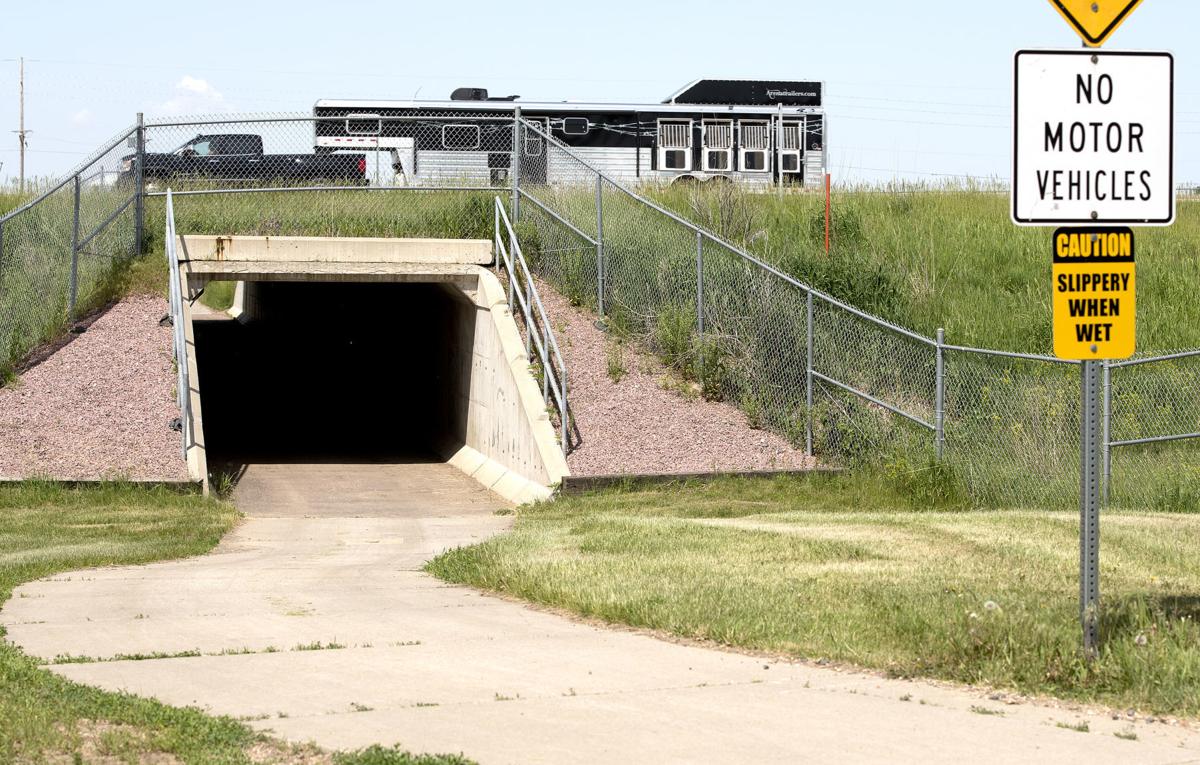 A southern portion of the Le Mars Recreational Trail where it passes underneath Highway 75 is shown June 6. Under plans for the PlyWood Trail, the southern end of Le Mars' trail would be extended to connect with Sioux City's trail system.

SIOUX CITY -- Work on the northern leg of a proposed trail linking Le Mars and Sioux City could start by next year, even before backers raise all of the $18 million it's estimated to cost.

Lesley Bartholomew, a member of the PlyWood Trail Committee, said in a perfect world the 16-mile trail would be completed by 2025, primarily in three segments.

So far, $4 million has been collected or pledged, about half of which has come from Le Mars-based Wells Enterprises, company president Mike Wells and his wife, Cheryl.

The committee also is is seeking state and federal grants, including a new one that will be awarded by July. Some additional donor announcements are expected in July.

Bartholomew said once residents see the first sections of the trail constructed, the excitement may spur them to donate.

"It is kind of a wait-and-see attitude for some individuals...We are talking to some potential large donors whose interest is piqued," said Bartholomew, who is also a spokeswoman for Wells Enterprises, makers of Blue Bunny ice cream.

The effort to build a trail, eventually dubbed PlyWood as a combination of linking Plymouth and Woodbury counties, dates to a Siouxland Interstate Metropolitan Planning Council survey of "what this area was missing, and trails were part of that," Bartholomew said. She's been involved since 2013.

Regarding the projected 2025 completion date for the trail, Bartholomew said, "They take time. It really is a million dollars per mile. We are doing (more expensive) concrete, not asphalt. We want to do it right the first time."

Dave Bak, of rural Le Mars, now bikes on trails in both Sioux City and Le Mars, and for a few years has monitored news about the possible launch of PlyWood. Bak does quite a bit of bicycling on county roads, and welcomes PlyWood for the comparative safety it provides.

"It would be good to be able to safely ride longer distances, to pull the communities together," said Bak, who also is president of the Plymouth County Cyclists group.

Bartholomew, an avid bicyclist, agreed with Bak that a trail is safer than riding on county roads, where cyclists have been struck and killed. Bak said he's seen from riding trails in other parts of Iowa that bicyclists will spend money in PlyWood towns on drinks, food and snacks as part of their usage.

Bartholomew said trails are desired quality of life improvements, in terms of boosting economic development and drawing people as a workforce, plus for recreation.

"Young people in particular appreciate trails and the ability to get outside," she said. "This will be a unique feature for Northwest Iowa, to connect four cities."

But the trail hasn't had unanimous support. Some people are detractors and there was a stumbling block over who would own the segment of the pathway in rural Plymouth County.

At that time in 2017, Plymouth County Board of Supervisors Chairman Don Kass said the board is "not anti-bike trail," but contended only 2 percent of people are avid bicyclists. Kass said it is not fair for the county to use tax money to give to the county conservation board for maintenance costs, since some county residents living some distance from the trail will never use it or "never lay eyes on it."

Bartholomew said the exact trail layout remains to be set, in part because the Iowa Department of Transportation has a say in some elements. But new expected pieces tie into how the trail runs in relation to U.S. Highway 75, so an underpass and a bridge will be placed near Merrill. Additionally, an old railway bed is expected to comprise the route for six miles in the middle, paralleling Highway 75 from Hinton to Merrill.

More than a year ago, three routing options were worked through in a series of meetings. The route selected in 2018 is the shortest of the three choices and also would have the least impact on landowners, as most of the property needed can be obtained in rights-of-way from the cities and IDOT.

"Really what it came down to is ... the other two both required property acquisition for either purchasing or getting easements to get onto private property," said McClure Transportation Team Leader Jeff Schug said at the time. "Trails do not have the right to condemn ground."

Other trail routes considered were the River Route, which would run along the Floyd River, and the West Route, which would not run along Highway 75 in the middle miles but rather veer a few miles west, south and then back east along country roads from Merrill to Hinton.

Over the time it has been discussed, PlyWood Trail cost estimates have grown from $10 million.

Sioux City Parks and Recreation Department Director Matt Salvatore on Thursday said the Sioux City Council has indicated the city will pay for the trail portion paved in city limits, which means grants could be used for other segments.

Salvatore, a PlyWood executive committee member, said he agrees with getting the trail started as early as 2020. Salvatore said the precise plans of the order for paving aren't set, and it is possible the north and south ends could come first, with the middle section completed last.

He noted Sioux City is the largest state town to have its existing trail not connect to at least one other Iowa town.

"It is always awesome to get started on a project like this," Salvatore said.

"There is a lot of support from Sioux City people and businesses. This is something the citizens of Sioux City are really excited about."

SIOUX CITY | A 16-mile recreational trail planned from Le Mars to Sioux City will travel along Highway 75, according to a proposed route annou…

HINTON, Iowa | Tom Keehn sat near the entrance to a public session concerning the PlyWood trail Wednesday with a bucket and a cardboard sign t…

Ron Peterson to retire as publisher of the Sioux City Journal

SIOUX CITY -- About this time 40 years ago in June, the first single from the The Knack was released and began its march to the top of the cha…

SIOUX CITY -- Beyond the traffic of Hamilton Boulevard and the winding roads leading up to Briar Cliff University, the tall grass drifts in th…

Man taken to hospital after wreck in Plymouth County, Iowa

HINTON, Iowa -- A man was taken to a Sioux City hospital after he drove a tractor into a ditch and was seriously injured in rural Plymouth County.

Reggie Torno, who lives in rural Sioux City, spends a lot of time observing trees and foliage, particularly this time of year. "The leaves should already be changing by now, and they're not," Torno said Wednesday. "Even the fruit on the trees was later (this year)."

SIOUX CITY -- A long-sought riverfront segment of more than 10 miles to the city's recreation trails system will finally be complete by fall.

Laurie Gray of Le Mars and her husband Allen Gray ride bikes on Le Mars Recreational Trail in Le Mars, Iowa on June 15. The proposed PlyWood Trail would link Le Mars with Sioux City, with the 16-mile trail also passing through the cities of Merrill and Hinton.

A southern portion of the Le Mars Recreational Trail where it passes underneath Highway 75 is shown June 6. Under plans for the PlyWood Trail, the southern end of Le Mars' trail would be extended to connect with Sioux City's trail system.