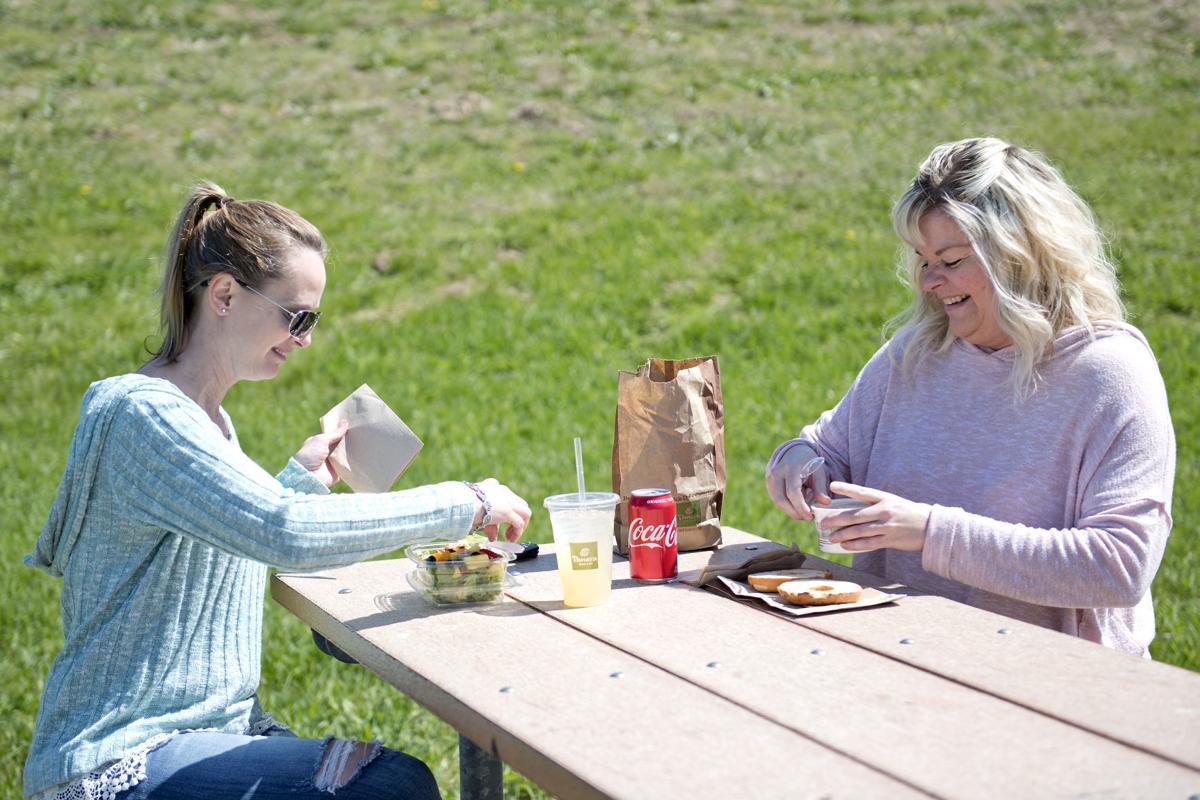 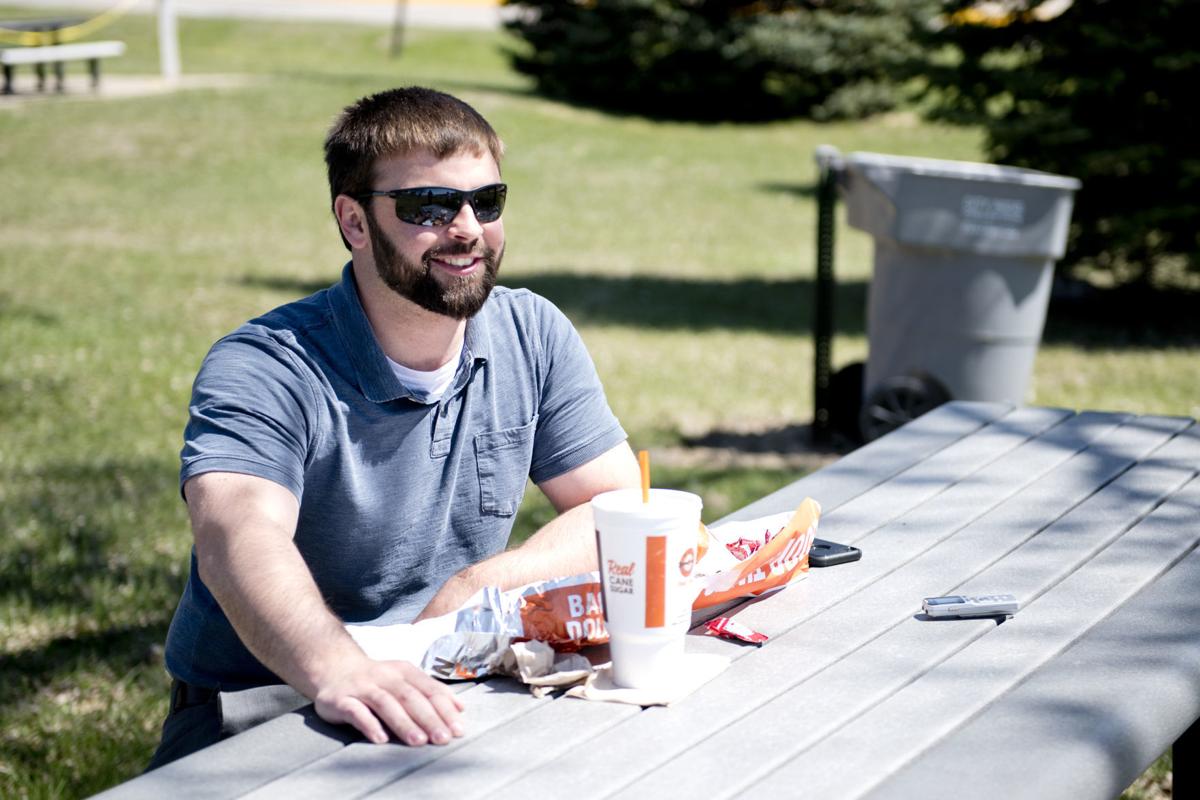 SIOUX CITY -- A takeout picnic lunch was just the ticket for two co-workers who haven't seen each other in five weeks.

Trisha Yockey and Michelle Blume, both of Sioux City, have worked together at Whispering Creek Dental for the past 14 years until they were laid off after Gov. Kim Reynolds suspended all elective and nonessential dental procedures in Iowa until April 30 due to COVID-19.

The pair arranged to meet at Sertoma Park Tuesday after grabbing lunch to-go from Panera Bread.

"I was having Michelle withdrawals," Yockey said as her friend pulled into the parking lot, got out of her vehicle and walked over.

"I have to give you a little hug. She's one of my best friends. It's been a long time," Blume said with a big smile.

Yockey is a dental assistant and Blume is the office administrator. The friends sat down at a picnic table to enjoy their meal. Yockey had a strawberry chicken salad and a cool lemonade while Blume tucked into a bagel and a cup of corn chowder.

"It means lot to me because I usually see her every day during the week. With the weather being so nice we couldn't turn down the chance to come and see each other," Blume said.

They are both making the best of the time off.

"This is the first time I haven't been working since I was 16 so it's a little unusual for me. But I am enjoying the time off. I live on an acreage so I get a lot of time to ride my horse and I've gotten extra things done. I am missing everyone from work," Yockey said. "It will be nice to get back and see everybody."

Blume is getting a jump on spring cleaning with her husband, Steve, and children Joe, 17, and Rylie, 13.

"My kids are home and I am actually enjoying the time with them. We're spending time outside and they are walking the dogs. For me it's been fine. I haven't been going stir crazy or anything," Blume said.

Her family has ordered takeout since restaurants closed to dine-in service.

"It's been a teaching experience. I've been teaching them how to do laundry and they've been cleaning their rooms," Blume said.

Yockey and her husband, Spencer, are finishing projects on their acreage, which they used to reserve for weekends.

The ladies weren't the only people enjoying takeout in a park setting. Joey Posivio stopped to eat his A&W cheeseburger at a picnic table at Sergeant Floyd Monument park.

"This is the first time I've been here. I drive by pretty frequently. It's a nice day. I went and bought some kitchen appliances and stopped and got some A&W and yeah this is right on the way back to work. It worked out perfect. It's a beautiful day. get out and enjoy it," Posivio said.

The Le Mars man is a project manager at Younglove Construction.

He is working on a project in Alabama. They normally travel to sites once a  month, but he hasn't been there for two months and doesn't expect to make the trip for at least another month.

Since he is still working, Posivio hasn't noticed a big change in his day-to-day life.

"My folks live in Minnesota. I haven't been up to see them. I didn't go home for Easter. But a lot of the day-to-day has been the same since I'm still going to work."

Where have you gone to eat takeout food other than your home since the coronavirus outbreak? Sound off at facebook.com/SiouxCityJournal

SIOUX CITY -- Woodbury and Dakota counties each passed 100 confirmed cases of the novel coronavirus as of Wednesday.

NORTH SIOUX CITY -- An employee of the Interbake Foods cookie bakery in North Sioux City has tested positive for the novel coronavirus, the ba…

Unity in Action organized an “Essential Employee Appreciation Caravan” Wednesday, with cars and signs showing support for Tyson front line employees and other essential workers as they navigate the pandemic.

SIOUX CITY -- Another 46 confirmed cases of the novel coronavirus were recorded in Woodbury County Thursday, the Siouxland District Health Dep…

UPDATED: One new case in O'Brien County, other individual lives in another county

PRIMGHAR, Iowa -- A new case of the novel coronavirus was reported in O'Brien County Thursday.

DAKOTA CITY, Neb. -- A team from the University of Nebraska Medical Center has toured the Tyson Fresh Meats plant at Dakota City and examined …

WINNEBAGO, Neb. -- A first case of the novel coronavirus has been recorded in the Winnebago area.

PENDER, Neb. -- Thurston County has recorded a second confirmed case of the novel coronavirus as of Thursday.

SOUTH SIOUX CITY -- Dakota County has tallied an additional 49 cases of the novel coronavirus, according to the Dakota County Health Department.

SOUTH SIOUX CITY -- Dakota County recorded its first death of the novel coronavirus Saturday, as the total number of confirmed cases in both W…