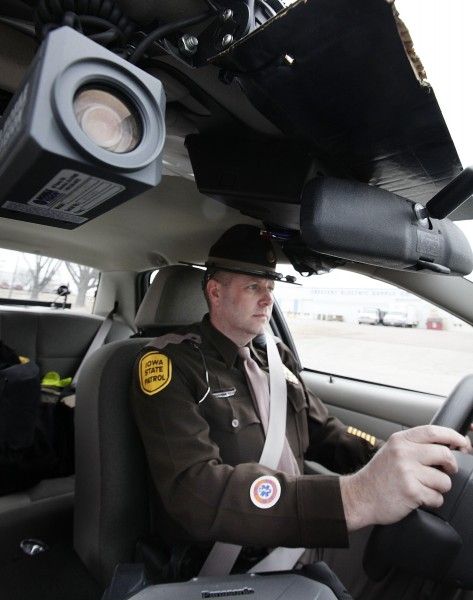 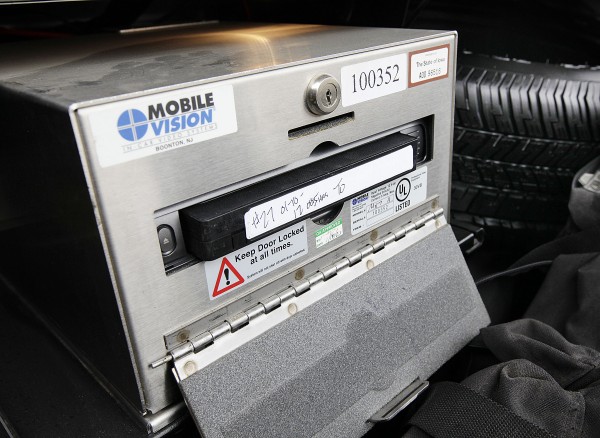 A videotape sits inside a VCR in the trunk of an Iowa State Patrol cruiser, on Tuesday. The agency is switching to digital recording.

Lovers of the VHS tape are running out of options.

Enthusiasts are more likely to find videos in a second-hand shop than a big-box retailer.

Now the Iowa State Patrol is kicking VHS to the curb.

Since the mid-1990s, videocassette recorders have been riding shotgun with state troopers, recording every traffic stop and car chase.

That will soon change. Officials are in the process of replacing the aging units with digital recording systems.

"About three years ago, it became apparent to us that VHS technology was on its way out the door and we were going to have to find another solution if we were going to continue our past practice of having in-car videos," said Trooper Kevin Farver, of the State Patrol's planning and technology office in Des Moines.

Farver gained hands-on experience with VHS while working at the Patrol's post in Council Bluffs, Iowa. The tapes record six hours of footage. Troopers remove full tapes from a metal vault in the trunk and take them in to the local post for a required storage period.

"After that retention period was met, these VHS tapes were run through a de-magnetizer, which would erase everything that was on them and then they would be placed in another cabinet to be used again," Farver said.

Farley embraces the move to digital system, doubtful he could even buy VHS in a store.

"Really, if you were an average person, to find videotapes for retail sale you'd probably have to go to eBay," he said.

Or the Salvation Army. Officials say VHS tapes are popular at the thrift store on Transit Avenue in Sioux City.

"We get a lot of tapes and we sell them for 97 cents," said manager Jason Duncan, who said the store has a bookshelf and a half filled with VHS tapes. "And, we go through them pretty well, surprisingly."

Their technological counterpart, the VCR, arrives at the store less frequently. Duncan said those are sold for $5-$10.

"We get maybe one every other week and then it doesn't stay very long; people buy them," Duncan said.

In Des Moines, Farver's not sorry to see the VHS tape retired from active duty. It served a valuable purpose bringing on-board cameras to the agency, he said, even if it did have its drawbacks.

"Just like the home video VCR players, there very rare occasion when the machine ate the tape," he said. "And, of course you wouldn't find out about it until you opened up that vault in the trunk."

SIOUX CITY -- Mary Felsing has practiced the same haircare routine for as long as she can remember.

Flashback: The last of the Siouxland typewriters

SIOUX CITY -- A few relics from bygone eras are scattered about the Woodbury County Courthouse.

Film falls out of favor among Sioux City photographers

SIOUX CITY | Bruce Meyer recently stepped in to help his elderly mom get a new roll of film for her camera. His options were extremely limited.

A videotape sits inside a VCR in the trunk of an Iowa State Patrol cruiser, on Tuesday. The agency is switching to digital recording.