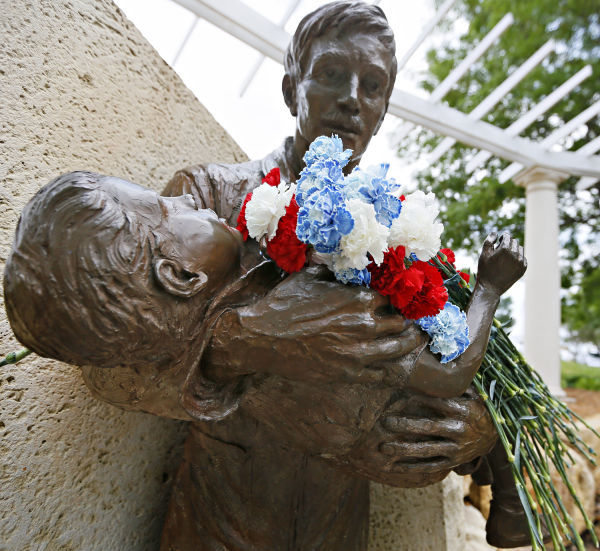 Carnations are shown on the Flight 232 memorial sculpture at Chris Larsen Park on July 20, 2014, following an ecumenical remembrance service. The service was the conclusion of the weekend's 25th anniversary observance of the Flight 232 crash. 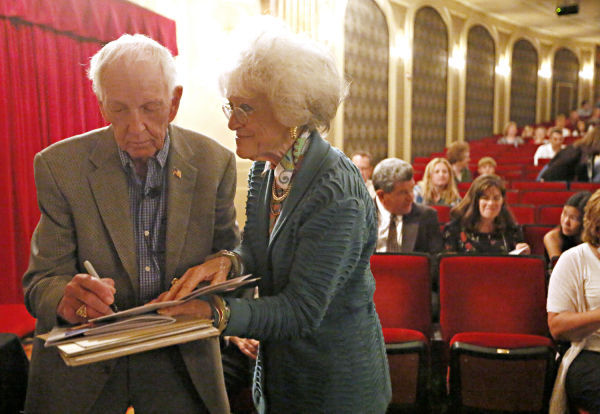 United Airlines pilot Capt. Al Haynes, left, signs a program for Jeanne Dietrich, right, of Omaha, on July 18, before speaking during a panel discussion at the Orpheum Theatre held in conjunction with the 25th anniversary of the United Airlines Flight 232 crash in Sioux City.

SIOUX CITY | As United Airlines Flight 232 headed toward Chicago on July 19, 1989, a loud explosion ripped through the aircraft.

Not a bomb but something almost as damaging. The tail engine on the DC-10 airliner had exploded. Debris from the engine severed the hydraulic lines, cutting power to the flaps, rudders and all other mechanisms needed to fly an airplane.

On that fateful day, Capt. Al Haynes and the crew attempted to land the aircraft as best they could.

When Flight 232 crashed at Sioux Gateway Airport, it left a deep impact on Siouxland and those who survived: 184 lived, 112 died.

To commemorate the 25th anniversary of the crash earlier this year, members of the flight crew, passengers and their families returned to Sioux City for a time of reflection and remembrance. Several events were planned from July 18-20.

On the first day, 50 emergency vehicles lined up on Pierce Street near the Orpheum Theatre on a Friday night to show how many agencies came together to help after the crash.

A full crowd came to the Orpheum Theatre to hear a panel composed of flight crew members and emergency personnel discuss "what happened, what we learned and how it has helped others" on the 25th anniversary of the crash.

Other events included open houses and tours of locations that were pivotal in Flight 232 history, such as Briar Cliff University, where survivors took sanctuary, and the runway where Flight 232 crashed. A quiet close to the 25th anniversary was held at the Spirit of Siouxland memorial in Chris Larsen Park.

On the day of the crash, hundreds of first responders from around Siouxland were at the airport waiting to help. Medical personnel flocked to the city's two hospitals. A line of people waiting to donate to the blood bank stretched down the street.

Brown, the head flight attendant on Flight 232, said the opportunity to return to Sioux City to remember friends she lost and reconnect with those she met through the disaster was extremely emotional, with feelings of joy, loss, gratitude and sadness.

She said the hurt remains but that those lost will never be forgotten.

What happened: United Airlines Flight 232 crash-landed at Sioux Gateway Airport 25 years ago on July 19, 1989. The community came together this summer for three days of remembrance.

Why it mattered: While 112 passengers died, 182 lived. Members of the flight crew, passengers and their families returned to Sioux City to reflect and reconnect.

What's next: Survivors of Flight 232 won't forget those who lost their lives and will continue to honor their memory.

After nearly 43 years of searching for answers, Kay Brock finally has an explanation, albeit incomplete, of what happened the late-spring evening her younger sister, Pamella Jackson, mysteriously disappeared.

Ray Hofman didn’t think he’d live to learn what happened to two Vermillion high school girls who disappeared under mysterious circumstances on May 29, 1971.

How thorough was 1971 search for missing Vermillion teens?

The question pops quickly to mind, it's so obvious. It's been asked many, many times since Sept. 23, when a passerby noticed a 1960 Studebaker -- last seen on May 29, 1971, with Pamella Jackson and Cheryl Miller inside -- poking out of Brule Creek.

A weekend devoted to reflection and remembrance of the crash of United Airlines Flight 232 in Sioux City 25 years ago concluded Sunday with a worship service and message of hope.

It took 25 years, but Ellen Badis got her wish. She met the aunt of a boy, Sean, who played with her son, Eric, aboard United Airlines Flight 232. Both boys were 5 years old. Eric and Ellen survived the crash; Sean and his parents died.

Haynes never considered himself a hero, choosing instead to give credit to his crew, said Woodbury County emergency management director Gary Brown, who served in that capacity at the time of the crash and grew to consider Haynes a "great friend."

Carnations are shown on the Flight 232 memorial sculpture at Chris Larsen Park on July 20, 2014, following an ecumenical remembrance service. The service was the conclusion of the weekend's 25th anniversary observance of the Flight 232 crash.

United Airlines pilot Capt. Al Haynes, left, signs a program for Jeanne Dietrich, right, of Omaha, on July 18, before speaking during a panel discussion at the Orpheum Theatre held in conjunction with the 25th anniversary of the United Airlines Flight 232 crash in Sioux City.