Tyson officials said the halt in production will provide time for a complete deep cleaning of the entire plant, the meat giant's largest beef processing facility.

The temporary closure of metro Sioux City's largest employer comes amid a surge in novel coronavirus cases. Last week, the spike landed the metro area at the top of the list of U.S. cities with the highest daily growth rate, with cases doubling every day or so.

Both of the metro residents who have died from the novel coronavirus worked at the Dakota City plant.

Hog farmers face crisis; King says plants need to be 'up and running'

Tyson also said Wednesday it has started screening plant workers for COVID-19 this week, with assistance from the Nebraska National Guard.

"Tyson testing all employees is a step in the right direction," said a health care provider who has treated local COVID-19 patients. The provider spoke to The Journal on the condition of anonymity.

Dakota County, which is one fifth the population of neighboring Woodbury County, had no cases as recently as April 11, but has since reported 704 positive tests, third most among Nebraska's 93 counties. Woodbury County has 749 cases.

Thirty Woodbury County residents were admitted to Sioux City hospitals for treatment of the virus as of Wednesday, up from 17 hospitalizations the previous day, according to data released by Siouxland District Health.

The health care provider said the inpatient numbers are expected to continue to grow, with MercyOne Siouxland and UnityPoint Health -- St. Luke's requesting more ventilators from the state in anticipation of a further surge.

"It's just alarming to see that type of increase and the potential for the loss of life and … people being very sick in our community," Mayor Bob Scott told CNN in a live interview Tuesday night. "We're hopeful now the curve will start to go down like it has in other places."

While the Dakota City plant is temporarily idled, workers will continue to be compensated, according to company officials.

A spokesman for the United Food and Commercial Workers Local 222, which represents hourly workers at the plant, offered support for the shutdown.

“We believe that in every meatpacking and food processing plant, the safety of the workers must come first," UFCW spokesman Evan Yeats said in a statement. "We share Tyson’s concern for the safety of their workers and will continue to encourage them to take whatever steps are necessary to ensure our members' safety."

“With that type of work, if they’re having a lot of positive tests out there, I think the leadership of Tyson is being responsible and getting in there and doing a deep cleaning, and then I’m sure they’ll have a game plan coming back to make sure everybody’s healthy that comes in that building,” Koch said. “And I think that speaks well to their commitment to the community, to make sure that place is safe."

Tyson officials previously acknowledged some Dakota City workers had tested positive for the virus, but has repeatedly refused to disclose a number of cases. State and county health officials also have refused to discuss any link to the plant and a spike in positive tests in the last two weeks.

"For some reason, Tyson is unwilling to share those numbers, which, to me, doesn't make any sense," Scott told CNN.

On Monday, Scott, Koch and three other metro area mayors called for greater transparency from state and county health officials about places contributing to the recent spike in local COVID-19 cases.

The mayors also asked businesses to "take responsibility for any outbreak or spread" of the virus, publicly disclose any positive cases and release a detailed plan for reducing the spread of the virus.

Employers who fail to comply with those conditions should close "until such time a response plan is in place," according to the statement, which also was signed by Sergeant Bluff Mayor Jon Winkel, North Sioux City Mayor Randy Fredericksen and Dakota City Mayor Jerry Yacevich.

The Dakota City facility, which is by far metro Sioux City's largest employer, is the latest meat plant to temporarily close to contain the virus. Other shutdowns have included Tyson pork plants in Waterloo and Columbus Junction, Iowa, the Smithfield Foods pork plant in Sioux Falls and the JBS USA pork plant in Worthington.

Meatpackers have struggled to contain the virus in the plants, where workers typically work side by side in production lines and often share crowded locker rooms and cafeterias.

On Tuesday, Seaboard Triumph Foods announced that 11 workers at the Sioux City pork plant had tested positive for COVID-19.

In an interview with The Journal Wednesday prior to Tyson's temporary closure announcement, Scott noted he had spoken with Tyson Fresh Meats President Steve Stouffer.

"I'm not going to pick on Tyson, because today we had Seaboard," Scott said. "It could be Wells (Enterprises in Le Mars) tomorrow. It could be any of them.

"All I'm asking for and will continue to ask for is better information coming out of these plants and better information telling us what they're doing to do their part to make sure we minimize the exposure. I think most people around here probably have gotten that message now."

Tyson noted it was one of the first food companies to start taking worker temperatures and has installed over 150 infrared temperature scanners in its facilities. The company said it also started efforts to secure a supply of facial coverings before the Centers for Disease Control recommended them and now requires and provides them for all employees in its facilities.

“Team member safety has and continues to be top priority for us and we’re grateful for our team members and their critical role in helping us fulfill, to the best of our ability, our commitment to helping feed people in our community and across the nation,” said Shane Miller, senior vice president & general manager beef enterprise, Tyson Fresh Meats.

The Dakota City plant normally produces enough beef in one day to feed 18 million people, Tyson said. Due to increased absenteeism over the last few weeks, the company said it has been forced to scale back production.

Tyson's closure announcement Wednesday came a day after President Trump signed an executive order that requires Tyson and other meatpackers to keep their plants open during the  pandemic. The order invokes the Defense Production Act to classify meat processing as critical infrastructure.

In a separate announcement Wednesday, Tyson announced $120 million in bonuses for its 116,000 frontline workers and truckers, up from the $60 million announced in early April. The company is moving up the first $500 bonus payment to early May. The second $500 bonus will be paid in July.

Employees unable to work due to illness or child care will continue to qualify, but bonus eligibility will depend on attendance, the company said in a news release.

PHOTOS: The week in coronavirus coverage in Siouxland

Seaboard Triumph, which opened in the fall of 2017, employs approximately 2,000 people. It is the second-largest fresh pork plant in the world, slaughtering more than 20,000 hogs daily.

There are currently 39 people hospitalized with COVID-19. That is up from Wednesday's figure of 30.

Iowa contracted with a private health care software company on a $26 million program to boost testing here. The TestIowa program is based on a similar one first implemented in Utah, where the reliability of the company's materials is being questioned.

Nursing homes in Iowa have been hit hard by COVID-19 outbreaks this month, and this week a nursing home in South Sioux City reported that three residents have tested positive for the virus.

State and local officials have been reluctant to tie the spike in cases to Tyson Fresh Meats' plant in Dakota City. The facility, the company's largest beef plant, employs over 4,300 workers.

"People are using, of course, more disinfectants because of the virus. Unfortunately, kids are getting into it," the center's executive director said.

Meridian Clinical Research did not develop the vaccine, but it is testing it at its offices in Dakota Dunes, Norfolk and Omaha.

The company has acknowledged some Dakota City workers testing positive for the virus, but has repeatedly refused to disclose a number of cases. State and county health officials also have repeatedly side stepped questions about the plant.

SIOUX CITY -- The tally of confirmed COVID-19 cases in Woodbury County rose to 1,034 Friday, with 183 new cases. Fifty individuals in the coun… 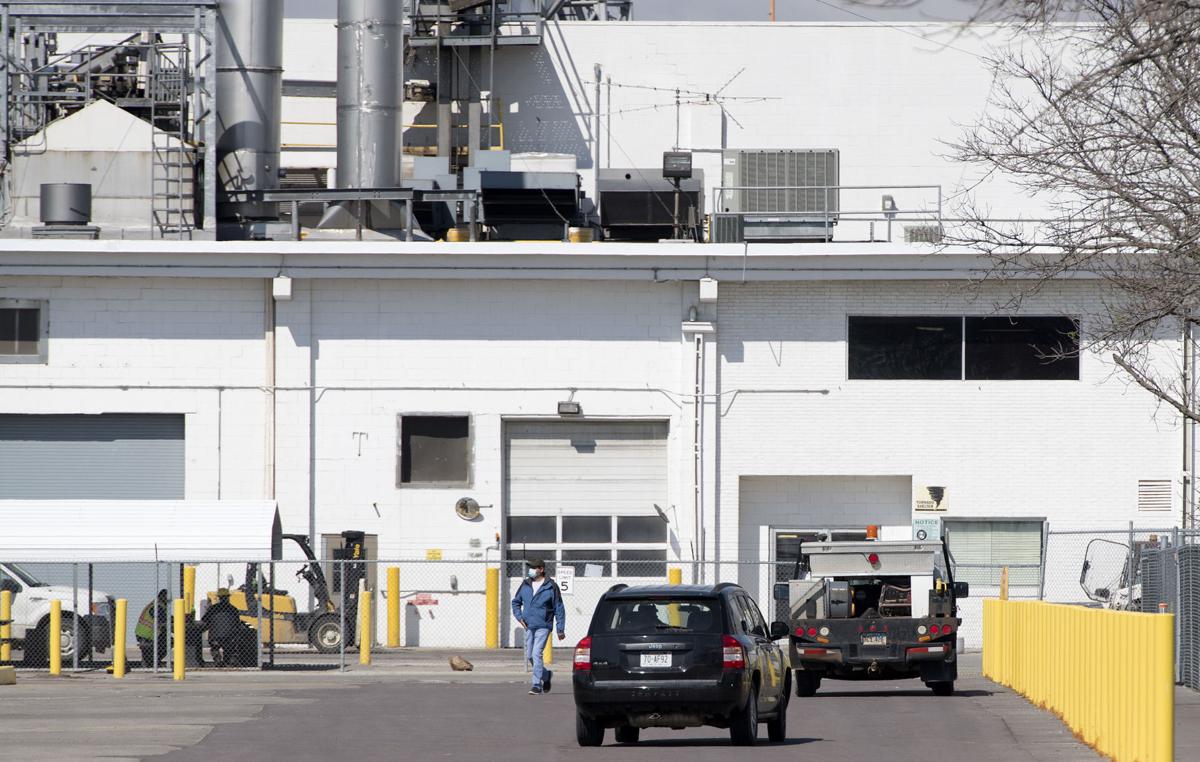 A person walks in the parking lot of Tyson Fresh Meats' flagship beef plant in Dakota City on April 29. The meat giant announced earlier that day it would close the 4,300-employee plant for four days to deep clean the facility.

A truck enters  Tyson Fresh Meats' flagship beef plant in Dakota City, Nebraska, Wednesday. The meat giant announced late Wednesday it will close the 4,300-employee plant for four days, beginning Friday, to deep clean the facility. Two Tyson workers have died of COVID-19 and an undisclosed number of others have tested positive for the novel coronavirus.