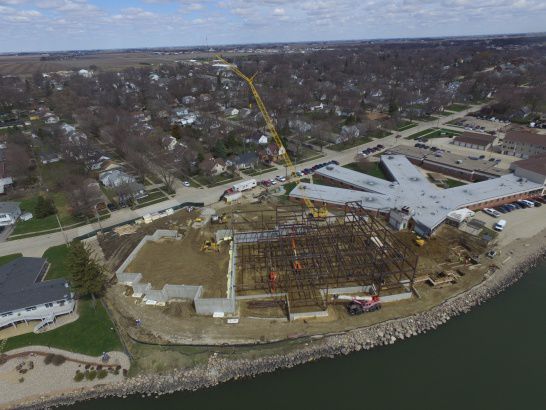 An aerial view in April shows construction of a 93-bed addition to Methodist Manor Retirement Community in Storm Lake, Iowa. A $25 million loan, offered through the U.S. Department of Agriculture’s Rural Development program, helped finance the project on the shores of Storm Lake. The USDA program could be in danger, some fear, because of a reorganization of the department President Donald Trump and the administration’s proposed 21 percent reduction to its ag budget.

A three-story, 93-bed addition to Methodist Manor Retirement Community in Storm Lake, Iowa, is shown in a rendering. A $25 million loan, offered through the U.S. Department of Agriculture’s Rural Development program, helped finance the project on the shores of Storm Lake. The USDA program could be in danger, some fear, because of a reorganization of the department President Donald Trump and the administration’s proposed 21 percent reduction to its ag budget.

Then along came a federal loan program that gave them the resources to not only complete the renovation but also construct a new facility.

A $25 million loan, offered through the U.S. Department of Agriculture’s Rural Development program, helped Methodist Manor construct a three-story, 93-bed long-term care facility expansion, demolish some portions of the facility and remodel others.

That program could be in danger, some fear, because of a reorganization at USDA under President Donald Trump and the administration’s proposed 21 percent reduction to its ag budget.

The Trump administration has restructured the USDA under Secretary Sonny Perdue. One change was to eliminate an undersecretary position that was devoted to the rural development program, creating instead an assistant secretary under Perdue who will focus on the program.

The rural development program provides loans and grants to help rural communities and organizations with many non-farm projects. The program has provided financial assistance for, among others: community facilities such as hospitals, assisted-living facilities, fire stations and community centers; telecommunications projects such as broadband expansion; and water-quality projects. The program also provides loans for rural businesses and homebuyers.

“The bottom line is rural development helps communities do projects they might not be able to do otherwise without their help,” said Bill Menner, the former Iowa state director for the rural development program.

The program awarded more than $4.5 billion in financial assistance to various rural Iowa communities and projects from 2009 to 2016, according to figures provided by the USDA.

Included in that total is the low-interest, 40-year, $25 million loan awarded to Methodist Manner in January 2016. The new facility is under construction scheduled to open in the summer of 2018.

“When we first were evaluating an addition to Methodist Manor, to the nursing facility side, we were looking at doing a smaller-scale addition and utilizing our current building,” said Nick Landgraf, the facility’s CEO. “As I started looking through what the (USDA’s rural development) program offered, the terms that were available, there were some things that we could do that we couldn’t do traditionally. And that allowed us to go back to the drawing board, and that allowed us to do a completely new facility instead of just an addition.

“Quite frankly, we wouldn’t be able to do what we’re doing without that rural development program.”

Program is a major boost

Officials who have worked with the rural development program say its value is the funding that might not otherwise materialize for projects in rural areas.

The Charles City Area Development Corp. has received several grants from the program. In 2015, for example, a $26,000 grant helped the group perform due diligence on a business development park.

Tim Fox, with the Charles City economic development group, said the group’s work with USDA in Iowa has been “a very positive experience.”

“Sometimes, it’s the only source of gap financing to do the project,” Fox said. “We’re expected to come up with our share, but the USDA is there to fill the gap. And without that, a lot of projects are not going to get done.”

Menner was Iowa state director during former President Barack Obama’s administration, during which former Iowa Gov. Tom Vilsack served as USDA secretary. Menner said he is concerned with the elimination of the undersecretary position because of its focus on rural development and the accountability that comes with being a Senate-confirmed position.

Menner’s concerns multiply when the reorganization is coupled with the Trump administration’s proposed 21 percent reduction to the ag budget.

“(Secretary Perdue) is moving forward to restructure USDA in a way that he thinks makes sense. And I think by eliminating that undersecretary, whose only purpose is to focus on rural communities, is a mistake,” Menner said. “And it comes on the heels of a Trump budget that decimates USDA, especially rural development. ... It’s just a sign that rural communities are not a priority right now.”

Menner’s concerns are shared, including by a group of national rural organizations that wrote leaders of the congressional ag committees a letter expressing their opposition to the reorganization.

The groups said a program like rural development, with such a wide scope, should have direct accountability to Congress in the form of a Senate-confirmed leadership position.

“Dropping the administration of these vast programs on to the laps of typically overburdened advisors in the Secretary’s office increases the chances of mismanagement and waste,” said the letter, which was signed by more than a dozen organizations.

“This reorganization recognizes and promotes the importance of rural development by placing it under the direct oversight of the Secretary,” says a report submitted to Congress in May to explain the department’s reorganization. “Placing rural development under the direct supervision of the Secretary will ensure the Secretary is also able to leverage USDA’s expertise with rural communities and new Administrative initiatives to focus on infrastructure investments in rural America.”

A spokesperson for USDA reiterated that the reorganization “elevates” rural development closer to Perdue by removing the undersecretary.

“Instead, the new Assistant to the Secretary for Rural Development, Anne Hazlett, has walk-in privileges with the secretary himself, rather than having another layer of reporting installed,” a USDA spokesperson said in an email. “Focusing on whether or not there is an undersecretary is also worrying about nomenclature. Simply calling someone an undersecretary does not elevate the mission area; attaching it directly to the secretary does.

“Sonny Perdue is a son of rural America and he is absolutely convinced that this elevation of Rural Development will lead to better opportunities for rural residents.”

Craig Hill, president of the Iowa Farm Bureau Federation, said he is less concerned with USDA’s reorganization and more concerned with two other factors: still-empty positions in USDA leadership and the president’s proposed budget.

Aside from Perdue, all other Senate-confirmed USDA leadership posts remain unfilled, according to a Washington Post/Partnership for Public Service tracker.

Hill said he thinks Hazlett will be a good advocate for rural development and the program will not necessarily suffer under the department’s new structure.

“These structural changes, it’s yet to be seen how it will impact the distribution and the success of our rural development programs,” Hill said. “And as an assistant to the secretary, I think Anne Hazlett will carry probably the same type of prominence and access that an undersecretary would have. I don’t think we’ve diminished that focus in the least.”

That is the hope of officials whose communities and projects have benefited from the rural development program in the past.

“We’ve been very satisfied with the service of the USDA offices in Iowa,” Fox said. “I think it’s going to be quite detrimental to the state’s rural areas should that not continue to transpire.”

Editor's note: Corrects the headline from an earlier version of this story.

SIOUX CITY | Iowa Secretary of Agriculture Bill Northey will be appointed to a new position in the U.S. Department of Agriculture, a website i…

Retailers say life is good at the Central Emporium

ARNOLDS PARK, Iowa | The Central Emporium, an iconic building overlooking West Okoboji that was constructed in 1901, is being restored to its …

STORM LAKE, Iowa | A Battle Creek, Iowa, man was arrested after police said he was involved in a fight with a knife at a business in Storm Lak…

An aerial view in April shows construction of a 93-bed addition to Methodist Manor Retirement Community in Storm Lake, Iowa. A $25 million loan, offered through the U.S. Department of Agriculture’s Rural Development program, helped finance the project on the shores of Storm Lake. The USDA program could be in danger, some fear, because of a reorganization of the department President Donald Trump and the administration’s proposed 21 percent reduction to its ag budget.

A three-story, 93-bed addition to Methodist Manor Retirement Community in Storm Lake, Iowa, is shown in a rendering. A $25 million loan, offered through the U.S. Department of Agriculture’s Rural Development program, helped finance the project on the shores of Storm Lake. The USDA program could be in danger, some fear, because of a reorganization of the department President Donald Trump and the administration’s proposed 21 percent reduction to its ag budget.