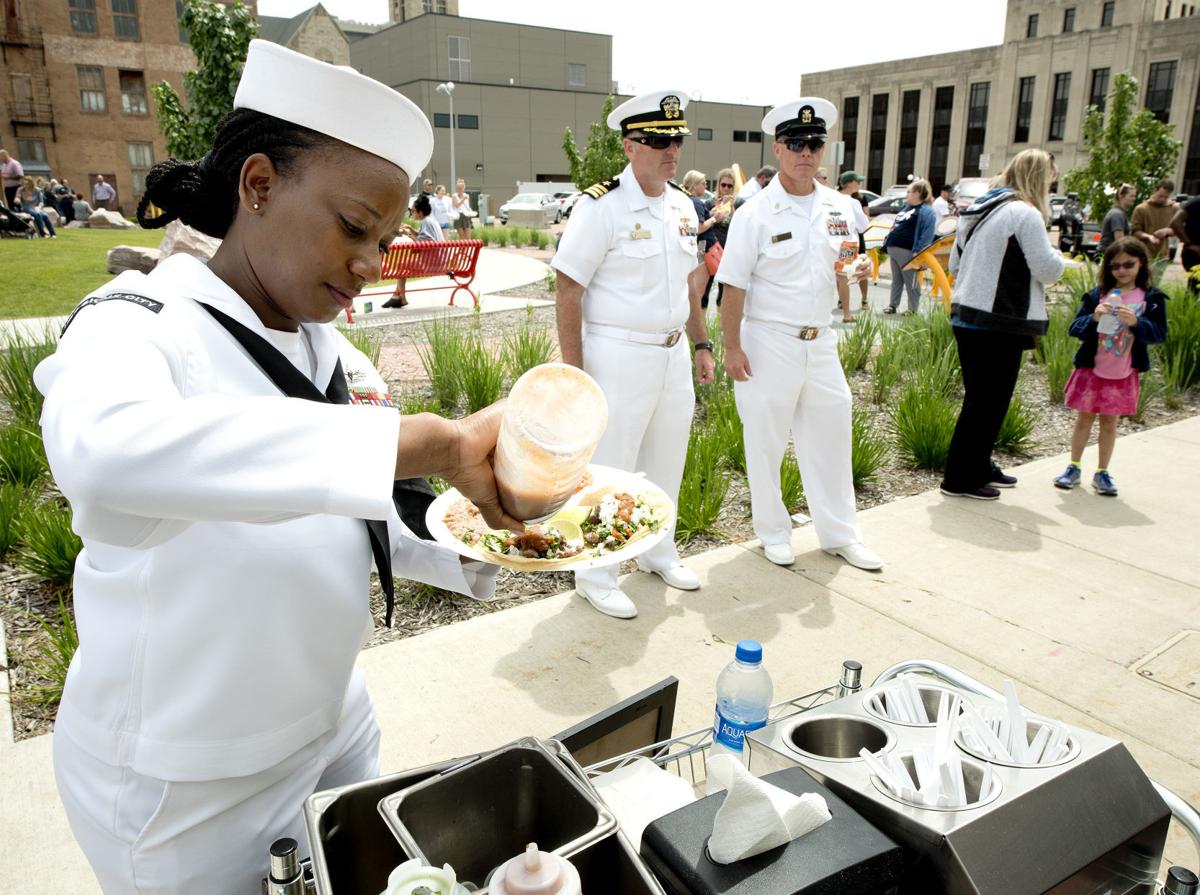 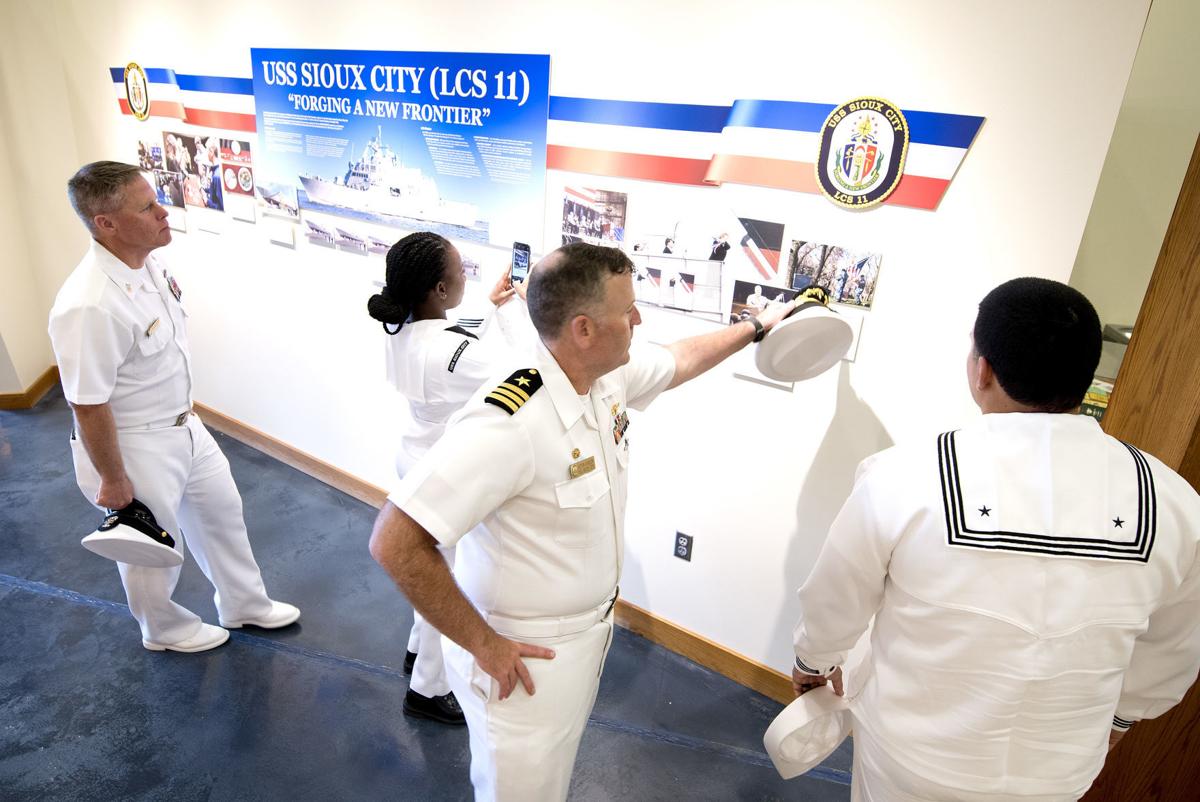 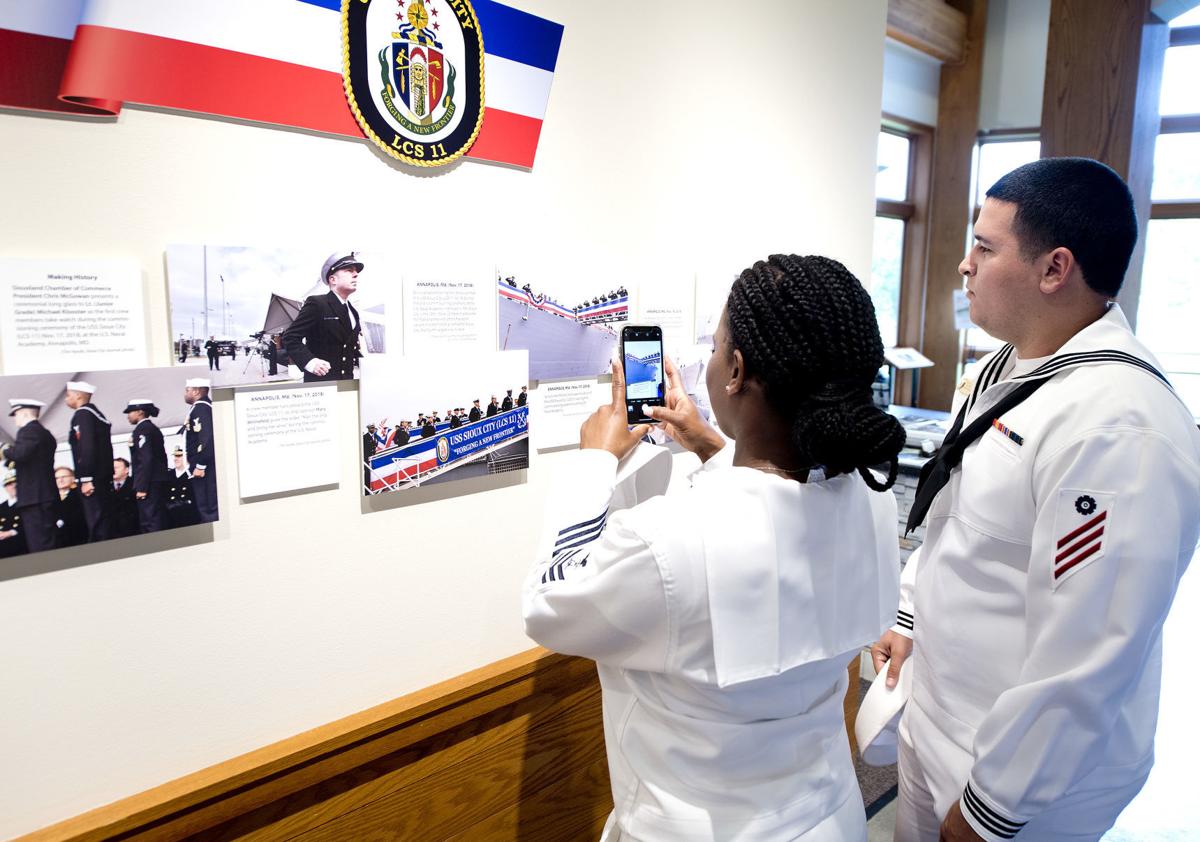 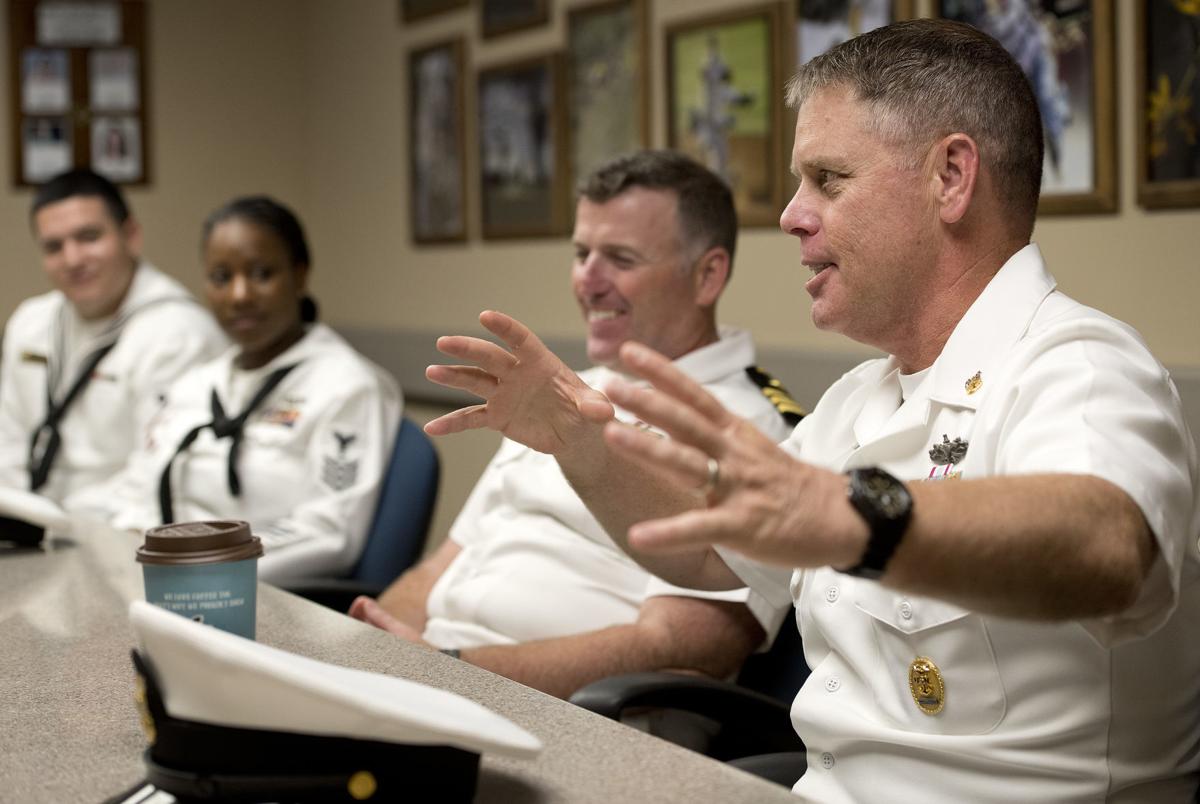 USS Sioux City crew members stand at the rail and salute as the ship departs Annapolis, Maryland, on Nov. 18 to go to its home port in Mayport, Florida. Members of the crew were in Sioux City this weekend.

Especially if you're the crew of a U.S. Navy ship and are ensured of having a continually full freezer of Blue Bunny ice cream on board.

"It has been phenomenal. It makes people anticipate it more," Command Master Chief Thomas Perkins said of the Siouxland product made available to the 70 or so crewmembers each time they embark or return from their home port or complete difficult training exercises.

Perkins and three other crewmates of the USS Sioux City visiting the ship's namesake city this weekend said Friday that the ice cream freezer, provided by Wells Enterprises of Le Mars, Iowa, is a treat found on no other Naval vessel. It's just one of the ways the Sioux City area continues to support the ship and its crew, nearly seven years after Navy officials traveled here to officially announced that a ship would be named after the city.

Fewer than 24 hours into her first visit to Sioux City, Culinary Specialist 1st Class Domanica Cisneros said she could already feel how much people care about the ship and want to support its crew.

"The vibe has been really nice. It feels like a family," she said. "You all have been amazing."

With some down time after testing exercises and taking part in a festival in Norfolk, Virginia, USS Sioux City crewmembers made a quick trip to Sioux City to re-establish connections the ship's crew has made with Sioux City.

"This is us coming by saying hi. It's good for sailors to see the support that's come from so far away," said Cmdr. Kevin O'Brien, the ship's commanding officer, who was making his third visit here.

The area's dedication to the ship is no secret. Local businesses and individuals donated nearly half of the $850,000 raised for the celebrations surrounding the ship's Nov. 18 commissioning, an event that drew more than 6,000 people -- hundreds of them from the Sioux City area -- to Annapolis, Maryland. They've donated to a legacy fund to help crew members and their families pay for educational expenses. O'Brien said many care packages for the crew arrived from Sioux City during the Christmas season.

"Despite you being very, very far away, we feel that connection," O'Brien said. "Every day we put on our covers (hats) that have Sioux City's name on them. We're honored to represent you."

With all the fanfare of November's commissioning now past, O'Brien said the ship's crew has focused on testing and getting it ready for service.

From its base in Mayport, Florida, the USS Sioux City, part of a new class of littoral combat ships capable of switching out its mission modules and also sailing in shallow waters closer to shore than other Navy ships, has spent hours in the Atlantic Ocean, testing radar, weapons systems and its engines. O'Brien said testing will continue through October. The ship will then undergo repairs of any problems found during testing.

In early 2020, repairs should be completed, and the ship will be ready to be assigned for duty.

"Wherever they need us, we'll be ready to go," O'Brien said.

With several reminders of Sioux City's support with them.

The USS Sioux City slides into the Menominee River after being christened in a ceremony Saturday, January 30, 2016, at Fincantieri Marinette S…

Photos of the commissioning ceremony for the USS Sioux City held Saturday, November 17, 2018, at the U.S. Naval Academy in Annapolis, Maryland.

ANNAPOLIS, Md. -- After nearly two years spent working to give the USS Sioux City and her crew a commissioning celebration they'd never forget…

USS Sioux City crew members stand at the rail and salute as the ship departs Annapolis, Maryland, on Nov. 18 to go to its home port in Mayport, Florida. Members of the crew were in Sioux City this weekend.