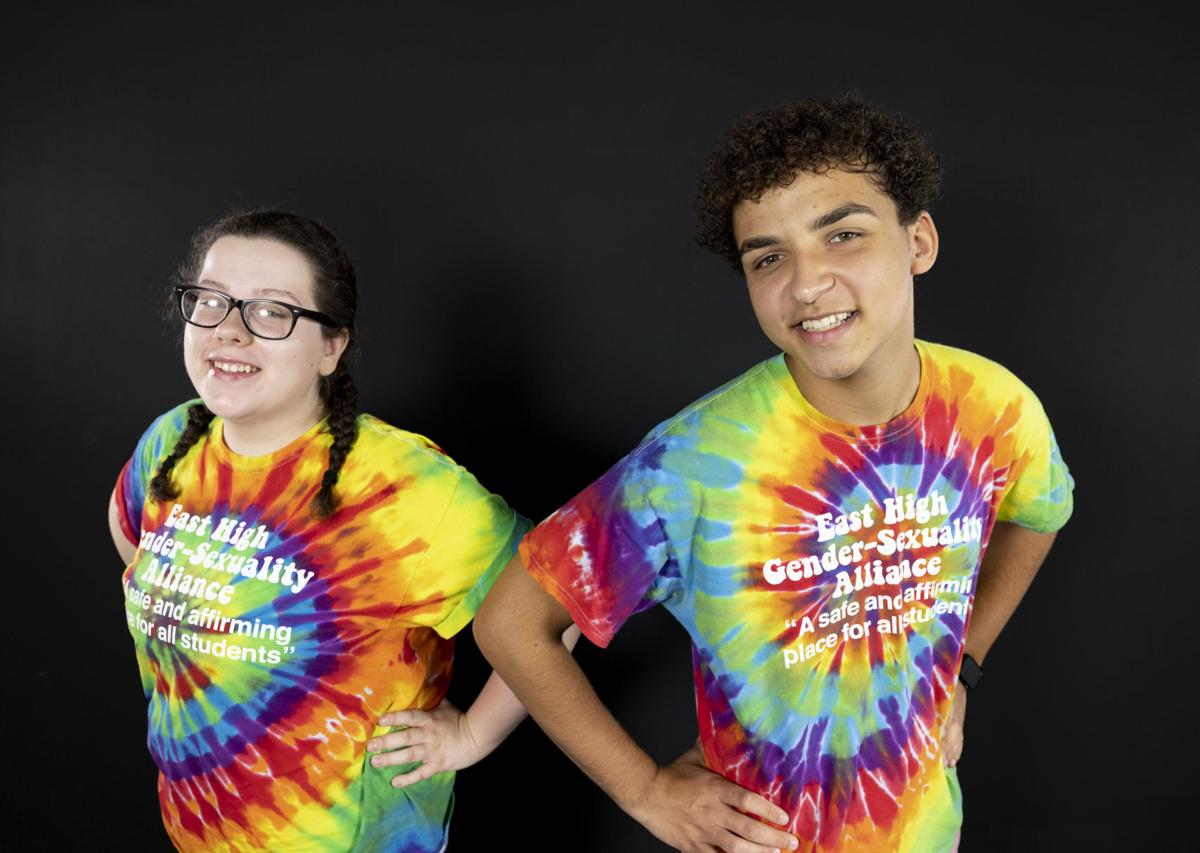 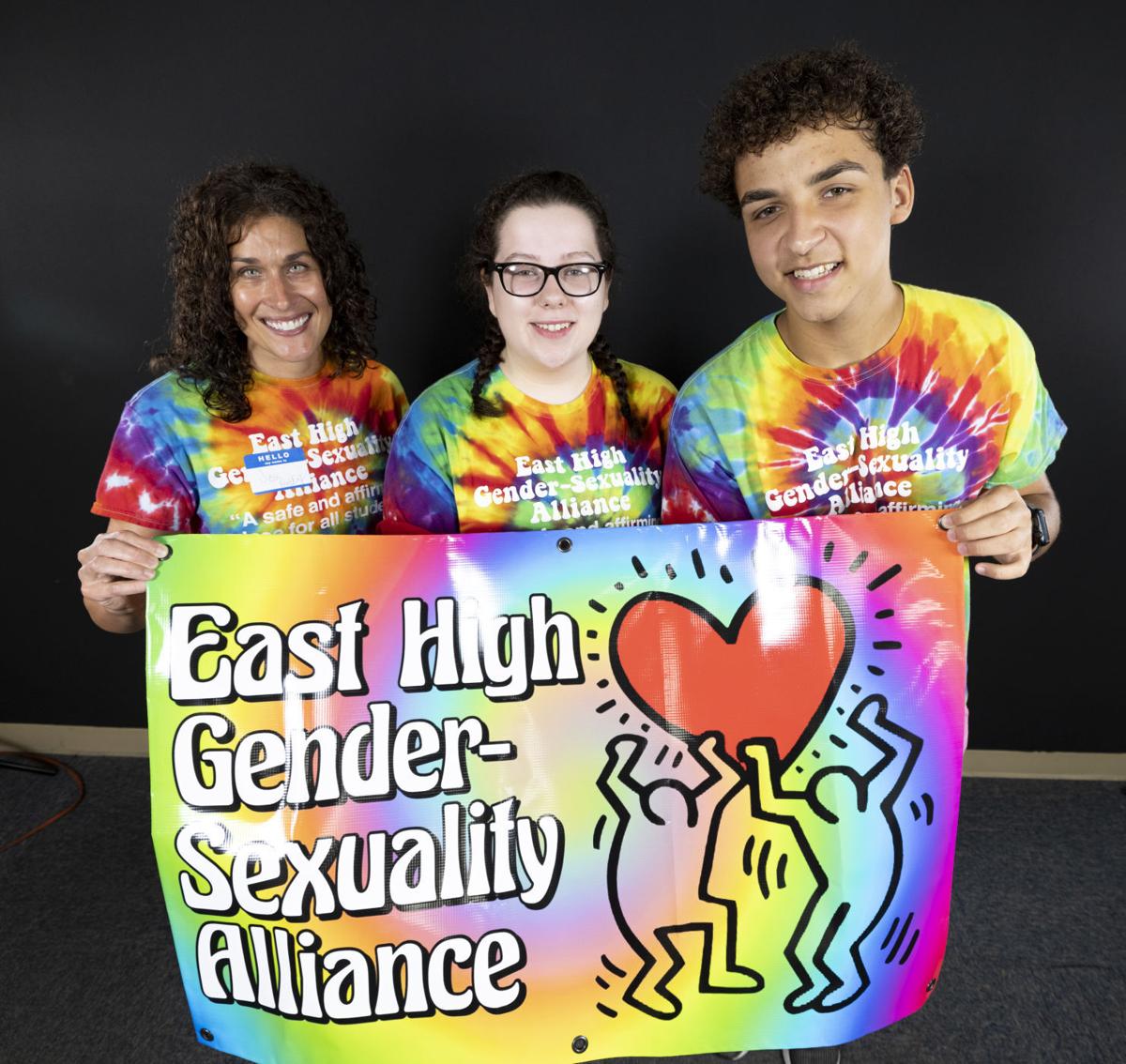 SIOUX CITY -- During the past school year, a handful of students would tear down a poster promoting East High School's Gender-Sexuality Alliance (GSA).

Afterward, Estella Ruhrer-Johnson, the group's president and an emerging 12th grader, would replace the missing sign with a brand-new one.

Plus she'd make sure to add two or three extra posters for safe measure.

"We refuse to be intimidated by anyone," the no-nonsense Ruhrer-Johnson, 17, explained. "Our group wants school to be a safe and welcoming place for all students."

Indeed, East's GSA has become a haven during the past 12 years for LGBTQ students and for those questioning their sexual identity.

Named after a Sioux Cityan who died in 2018, the Joel Hurtado Community Support Award recognizes businesses or organizations that have demonstrated outstanding support and service to the LGBTQ community.

Previous recipients were Orange City Pride (2019) and the Siouxland Humane Society (2020). This year, East's GSA was recognized for serving the local community by attending Pride events, educating others, and fulfilling a longstanding commitment to welcome all participants, gay or straight.

"It's so nice to know that we're in the school and in a district that celebrates diversity," Ruhrer-Johnson explained, noting that North and West also have similar GSA clubs. "For the most part, we know they have our backs."

That's important because the high school years are often when teens begin to have questions related to gender or sexual orientation.

"I came out as gay when I was in the eighth grade," Ruhrer-Johnson said. "I was lucky because I was immediately accepted by my family and friends."

"Ditto for me too," Dominic Eastman, an East emerging 12th grader and GSA's vice president, interjected. "Everyone who was important to me accepted who I was. This isn't always the case."

When GSA members meet, they often discuss such difficulties.

"For some of our members, we're an 'art' club because they're afraid to come out to their families," Ruhrer-Johnson said.

According to Eastman, such qualms are legitimate.

"We've known students who've been bullied and even kicked out of their families for coming out," he said. "Things are getting better. However, we're not there yet."

It has only been recently that Ruhrer-Johnson, Eastman and school adviser Jess Fielding began working on a gender pronoun chart for teachers to use.

"Some students identify as a 'he' or a 'she,' but what happens when they don't identify as a male or a female?" Fielding asked. "Then, it is OK to use a term like 'them' as opposed to one related to a specific gender."

This is a breakthrough, according to Ruhrer-Johnson.

Citing statistics from the Trevor Project, a national organization devoted to crisis invention for lesbian, gay, bisexual, transgender, queer and questioning individuals, suicide is the second-leading cause of death for individuals under the age of 25.

"Somebody who is LGBTQ is almost three times as likely to contemplate suicide," Ruhrer-Johnson said. "Nobody wants to be a part of those stats."

Which is why GSA groups are so important.

"And it isn't just about being gay," Ruhrer-Johnson said. "We talk about grades, friends and activities that have nothing to do sexual identity."

In other words, GSA members are allowed to be like typical high school kids.

"Everybody wants to be accepted for who they are," Eastman said. "Especially in high school."

Both Ruhrer-Johnson are making plans for their senior year in high school as well as prepping for college.

"I'd love to become either a social worker or an advocate in LGBTQ issues," Ruhler-Johnson said, adding that a run for political office might also be in her future.

Right now, Eastman is mulling over his choices.

"I wouldn't mind becoming a teacher," he said. "I want to make sure that schools remain a safe and welcoming place for all kinds of students."

What does diversity mean to you? Sound off at facebook.com/SiouxCityJournal

SIOUX CITY -- When an actor plays an asynchronous scene, he can neither see nor touch his acting partner.

SIOUX CITY -- For as long as she can remember, Trinity Edwards knew that school was the place where she could dream about her future.

SIOUX CITY -- Viridiana Curiel admitted it feels strange to be walking through the halls of West Middle School these days.

SIOUX CITY -- At 6:45 a.m. most weekday mornings, band director Kamal Talukder gets to see the sun rise from the field at North High School.