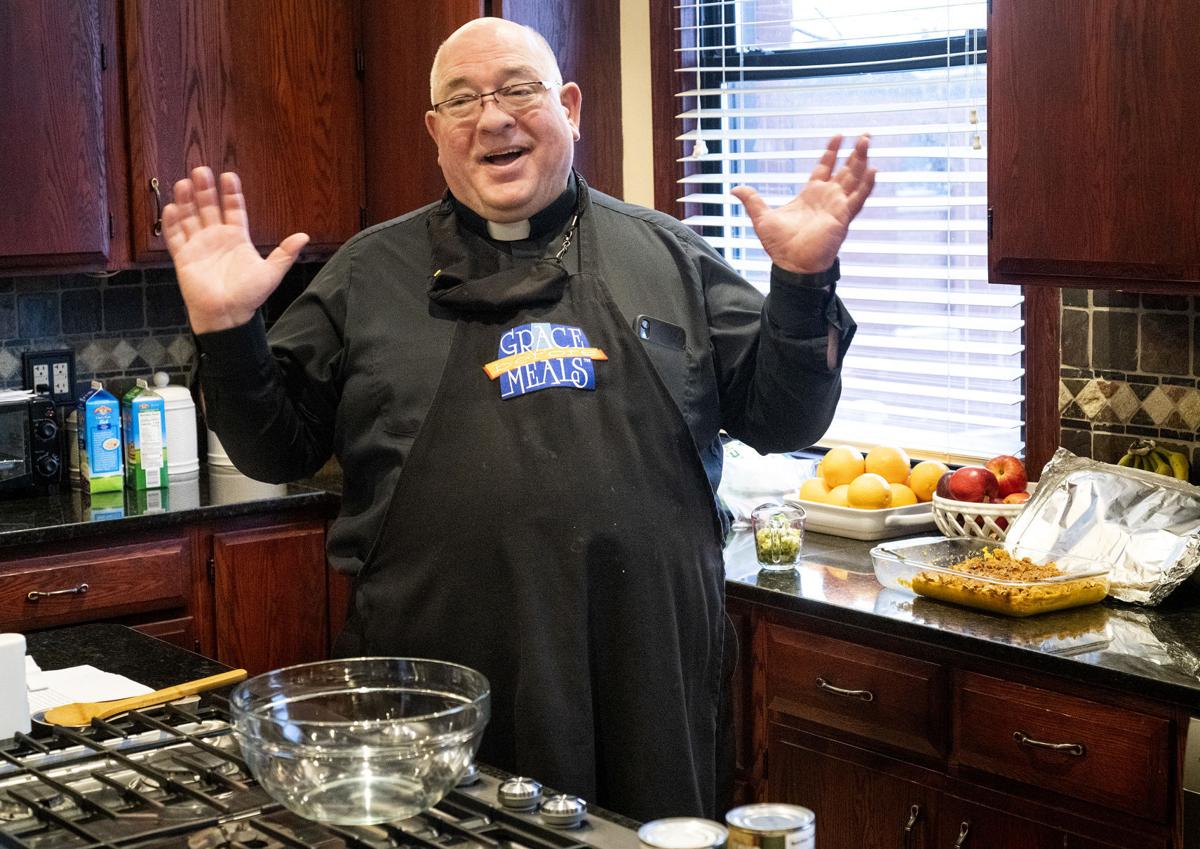 The Rev. Brad Pelzel laughs while preparing a corn casserole at his residence. Pelzel is a self-taught cook who became interested in cooking in seminary school after shadowing a pair of grandmothers who operated a clandestine restaurant in Rome. He now cooks for parishioners and his fellow priests.

Chopped onions are shown on a cutting board as the Rev. Brad Pelzel cooks at his residence.

SIOUX CITY -- On a snowy Tuesday in November, the Rev. Brad Pelzel added chopped veggies into a pan while the main course heated up in the oven.

"When it comes to Italian cooking, timing is so important," the Diocese of Sioux City priest explained. "You prep everything ahead of time in order to combine it in the end."

Working in the food service industry for more than a decade before becoming a seminarian, Pelzel learned the fine art of Roman cuisine from real-life Italian grandmas.

Since then, he's become known as "The Cooking Priest" by both parishioners as well as many of his colleagues.

Wait, that doesn't sound very Italian to us?

"Well, I cook for my priest housemates two nights a week," Pelzel said, inside a home located near the Cathedral of the Epiphany. "A few of the fathers are originally from Mexico, which means my cooking can take a few interesting turns."

Actually, that isn't a bad way to also describe Pelzel's life leading up to the priesthood.

The eldest of nine children, Pelzel was the son of a dad who learned to cook while in the U.S. Army, and a no-nonsense mom who taught her children to be self-sufficient.

"My mom wanted her kids to know their way around a kitchen in addition to knowing how to use a needle and thread," he remembered. "Our entire family knew how to cook a meal and sew on a button at an early age."

The former skill came in handy when Pelzel worked at an A&W Restaurant in his hometown while in high school.

After high school, Pelzel toyed with a career as a seminarian, but he developing a drinking problem. He dropped out after his third year in college.

Drifting his way through life, Pelzel got engaged to a woman who later dumped him. He began working at a Burger King, simply because it offered a flexible schedule in order to indulge in a few bad habits.

Surprisingly, Pelzel moved up the managerial ladder at Burger King. After he stopped drinking, Pelzel experienced an even faster climb while working for Wendy's.

It was when his sister wanted to have her son baptized in Rome that Pelzel began rethinking his life's goals.

"My sister and brother-in-law asked me to come to Italy for the baptism, and visiting the country had been a dream of mine," he recalled. "While this wasn't a 'Come to Jesus,' it made me want to devote my life to the priesthood."

Enrolling at Pontifical Gregorian University in Rome, Pelzel continued on his road to becoming a priest. At the same time, he befriended some grandmas who ran a slightly clandestine restaurant in a decidedly sketchy neighborhood.

"The grandmas worked in a small spot with four tables and no sign in front," he explained. "They became known as making the best Roman food in Italy."

And what, exactly, makes food "Roman"?

Pelzel said it means using a handful of quality ingredients in recipes while delivering maximum taste.

For example, a sauce using a few ingredients can be placed on pasta at the end of the cooking cycle. Ironically, this was the opposite of how Pelzel's mom made spaghetti.

"My mom got sauce from a can and kept it on the stove for two hours," he noted. "The Italian grandmas said if you cook sauce for more than 15 minutes, it dies."

Since returning to America, Pelzel has followed the advice of the grandmothers -- as well as his own mom -- when feeding parishioners when he served as priest in Moville and Kingsley as well as in his current position of vicar general for the Diocese of Sioux City.

However, his recipe collection has expanded greatly over the years.

Pelzel loves to use recipes he finds on the website Allrecipes.com as well as TV shows like PBS' "America's Test Kitchen" and "Christopher Kimball's Milk Street."

But nothing can beat a bit of culinary ingenuity as well as a limited budget of a priest.

"A lot of times my recipes are dictated on what I can get on sale," Pelzel admitted. "If beef's on special, I'll get that. If chicken's on special, we'll have chicken for dinner."

Still, there is something spiritual about breaking bread with one another.

"The Bible is full of allusions to foods and to heavenly banquets," Pelzel said. "Eating is a shared experience."

This is true, whether it is with congregation members or with Pelzel's fellow priests.

"The priesthood is like an extended brotherhood," he said. "Serving and eating a meal with fellow priests is like eating with family."

Every Siouxland food (and drink) photo in the Journal in 2020

Daga's On Wheels during COVID-19

The number of unemployed Iowans declined to 58,500 in October — down from 78,700 the previous month.

The Rev. Brad Pelzel laughs while preparing a corn casserole at his residence. Pelzel is a self-taught cook who became interested in cooking in seminary school after shadowing a pair of grandmothers who operated a clandestine restaurant in Rome. He now cooks for parishioners and his fellow priests. 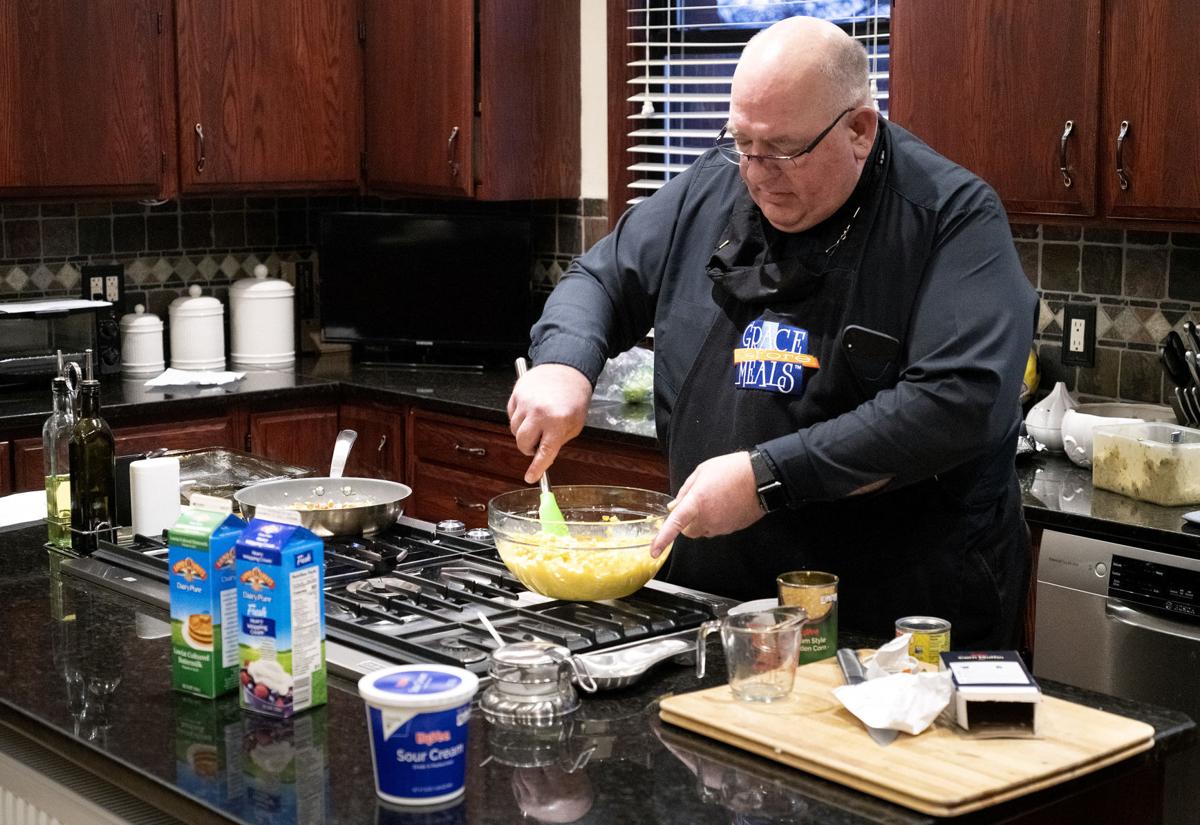 The Rev. Brad Pelzel stirs a corn casserole at his residence. 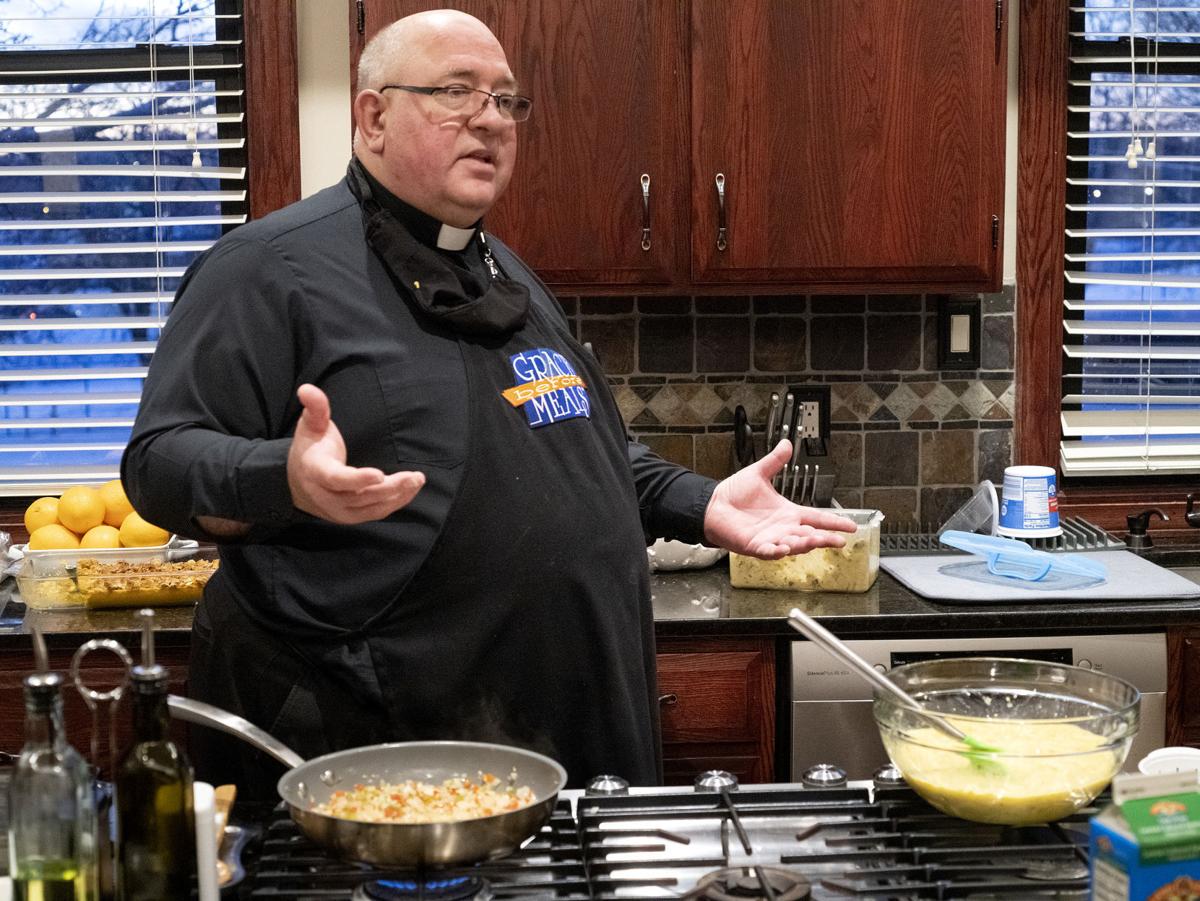 The Rev. Brad Pelzel gestures while making a corn casserole at his residence.

Chopped onions are shown on a cutting board as the Rev. Brad Pelzel cooks at his residence.