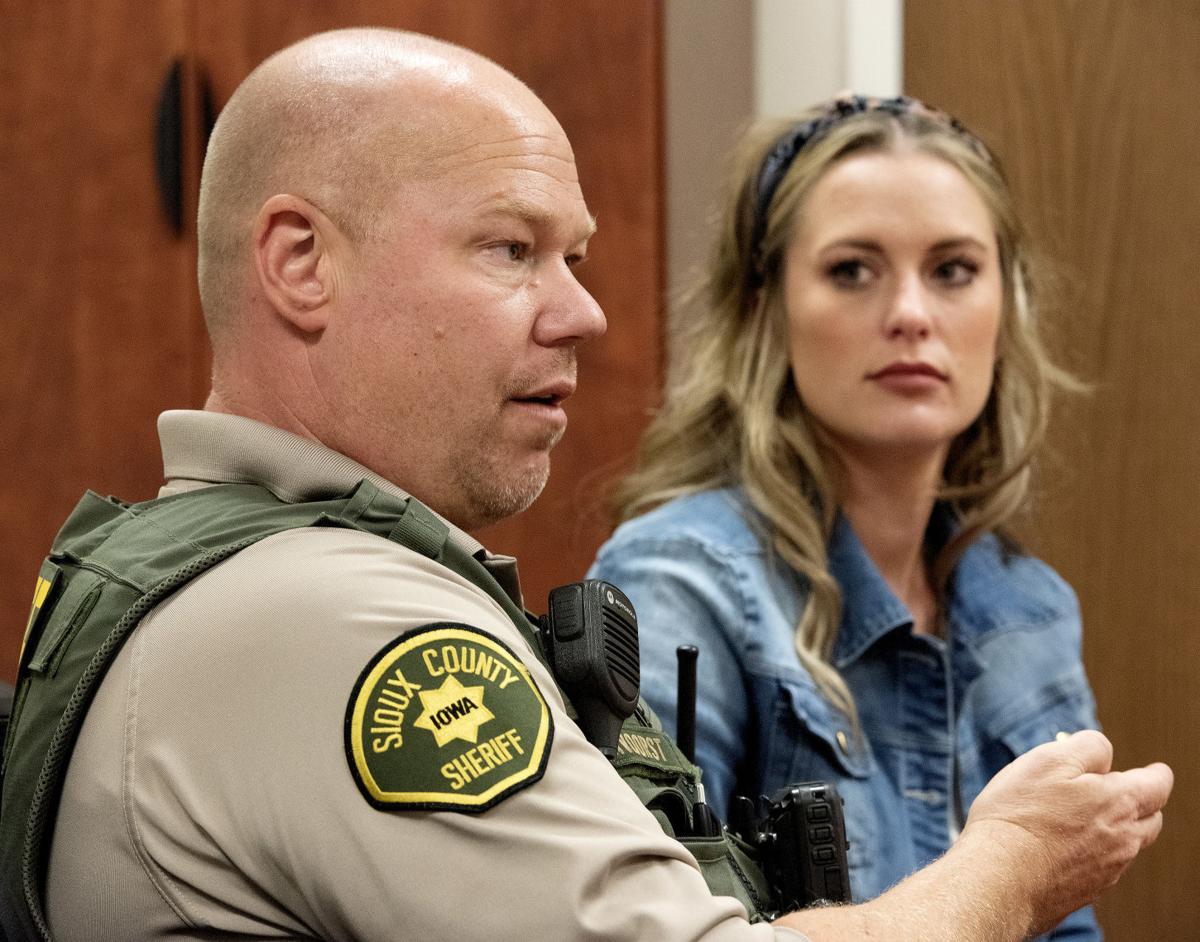 Seasons Center employee Janelle Hultquist listens as Sioux County Sheriff's Capt. Jamie Van Voorst talks, during an interview at Seasons Center for Behavioral Health in Sioux Center, Iowa. The mental and behavioral health organization has partnered with the Sioux County Sheriff's Office to be on call 24/7 to help the sheriffs department assess people who are struggling with mental health challenges. 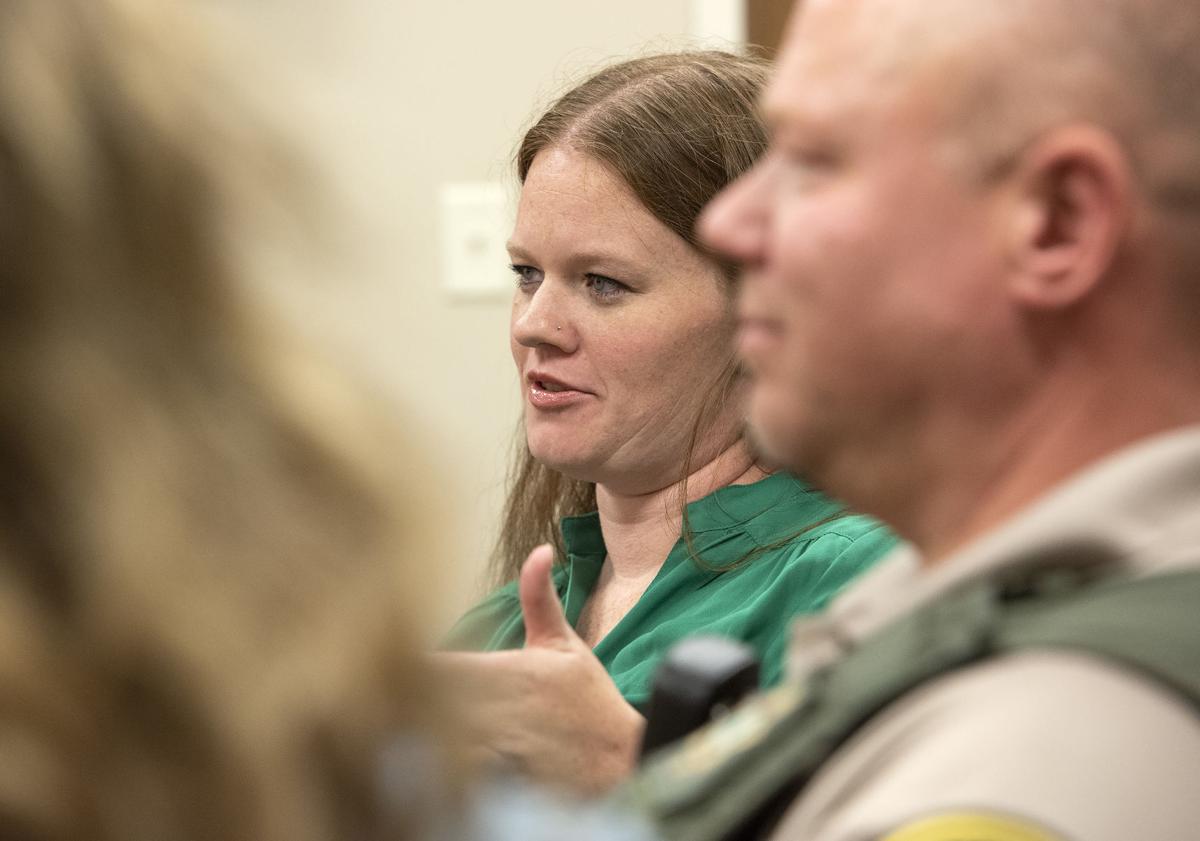 Kassie Carpio, a trauma therapy specialist, talks as Sioux County Sheriff's Capt. Jamie Van Voorst, right, and Seasons Center's Janelle Hultquist listen, during an interview at Seasons Center for Behavioral Health in Sioux Center, Iowa. The mental and behavioral health organization has partnered with the Sioux County Sheriff's Office to be on call 24/7 to help the sheriffs department assess people who are struggling with mental health challenges.

The woman, who wasn't taking the medications prescribed to treat her severe mental health issues, would be caught trespassing or she would swipe a student's bike from the school parking lot, ride it across town and abandon it.

"We were getting called to deal with her a lot of times," Van Voorst said of the woman, who didn't have any family members who were willing to commit her. "Jail is not the place for someone like that. It's just not a productive setting for somebody like her. We felt bad about that, because we just didn't know what else to do. We were getting a lot of heat from citizens who were tired of it."

"If we would've had the crisis team to call, that would've been great," said Van Voorst, who noted that in the past, it wasn't unusual for a deputy to spend his or her entire shift at a hospital waiting for a mental health patient to be admitted. "If somebody can come and sit and talk with them, we love that. Then, we can kick our guys to handling burglaries and thefts and accidents. Then, you're not tying them up just kind of waiting."

Response team members from Seasons Center are trained to de-escalate a variety of situations. They might speak with someone who's just "having a bad day," a person who's struggling with substance abuse issues or an individual who is upset about being involuntarily committed, according to Van Voorst.

Janelle Hultquist, a crisis intervention staff member for Seasons Center, said the program is a state-mandated core service. Each mental health region partners with an agency and funds the service. Sioux Rivers Mental Health & Disability Services chose to collaborate with Seasons Center, which offers a broad range of psychiatric and behavioral health services in Northwest Iowa.

"What we like to do is avoid law enforcement having to do any court committal," Hultquist said. "Through the Sioux Rivers Mental Health Region, we have a crisis van. So, if we're able to have two of us staff, we're able to transport. We've transported multiple people down to the crisis assessment and stabilization in Sioux City."

There is a "very great" need for mental health services in Sioux County, according to Hultquist.

She said there is "turnover" among mental health care providers and that "nine times out of 10," patients are facing a waiting list. The COVID-19 pandemic has only further compounded the problem.

Kassie Carpio, a trauma therapy specialist who works with self-identified victims of crime, said domestic violence victims have been trapped in their homes amid the pandemic, the stress of dealing COVID-19 has brought up past trauma for some survivors, and suicidality is on the rise among children.

"When everything's shut down, kids are also stuck at home. Adults would sometimes have an outlet to go to work or to other places and kids were at home doing online school," said Carpio, who in her five years working for Seasons Center has encountered elementary school children who have had suicide attempts interrupted.

Carpio said individuals struggling with mental health symptoms are often "quite high-functioning." She said self-isolation, as well as changes in sleeping, appetite and a person's daily routine are warning signs that should prompt a conversation.

"I think we all have a responsibility in a community to check in with each other and care about each other," she said. "I know it makes people uncomfortable if they're not used to talking about suicide or mental health struggles, but, in reality, they're fairly common."

"We split it up. We have an east and a west side," she said. "There's always two of us scheduled, one on each side."

When a resident or a referral source, such as law enforcement, calls 844-345-4569, response team members need to get to the individual in crisis as quickly as possible, responding within an hour's time at the latest.

A couple months ago, Van Voorst said the response team was instrumental in getting a man to eventually peacefully comply with a court ordered committal. He said the tense situation played out at the man's home over the course of two days.

"His family called us and we went there," said Van Voorst, who noted that the man was "very upset" when deputies arrived at his house. "He wasn't going to go with us. He, in fact, tried to shut the door on one of the first deputies there. The deputy had to force his way in, otherwise, you might have a barricaded deal, or (the man) tries to harm himself."

Van Voorst said deputies were unable to persuade the man to willing go to MercyOne Siouxland Medical Center in Sioux City, so they contacted the response team. Hultquist met with the man face to face, while law enforcement stood by outside. She didn't make much progress the first night, but she kept in contact with the man, whom she described as "very high-risk," due to a recent history of suicide attempts.

The next day, Hultquist's co-worker handed her the phone. The man was on the other end. The committal order had come through and a bed was waiting for him at MercyOne.

"It was a long conversation of easy way or hard way, and how can we do this the easy way and how can I walk through this with you?" recalled Hultquist, who said she approaches these situations as if she was talking to one of her own family members or friends.

Van Voorst said he thinks Hultquist's calm demeanor, mental health care training, as well as the fact that she isn't a law enforcement officer, made all the difference in getting the man to exit the home and leave in a squad car without incident.

"I'm 98 percent certain it wouldn't have happened that way had (Hultquist) not been on the phone," he said. "I've been to enough of these that I know it would've been a hands-on deal, where people would've had to wrestle him. People get hurt then. We don't want to have to do that. This the way to go, when he'll walk out on his own."

Don't feel like tracking down some of our biggest stories of the week? Not to worry, the Journal's got you covered.

SIOUX CITY -- Some of the seniors Siouxland PACE serves have spent several months isolated in their homes amid the COVID-19 pandemic.

A UnityPoint Health -- St. Luke's said demand is lower because people are fearful of contracting COVID-19, but that those patients seeking services "are much more ill."

Not much in Tuesday's elections was competitive for Osceola County.

One of the closest races in Dickinson County on Tuesday ended up being the council election for Orleans.

The U.S. Food and Drug Administration has approved the use of Pfizer's pediatric COVID vaccine and local agencies are prepping for its arrival

Sioux Center is relocating 13 historic buildings to "create new enthusiasm" for Heritage Village and make way for an $8.5 million, 120,000-square-foot indoor sports complex being built near the fairgrounds.

Seasons Center employee Janelle Hultquist listens as Sioux County Sheriff's Capt. Jamie Van Voorst talks, during an interview at Seasons Center for Behavioral Health in Sioux Center, Iowa. The mental and behavioral health organization has partnered with the Sioux County Sheriff's Office to be on call 24/7 to help the sheriffs department assess people who are struggling with mental health challenges.

Kassie Carpio, a trauma therapy specialist, talks as Sioux County Sheriff's Capt. Jamie Van Voorst, right, and Seasons Center's Janelle Hultquist listen, during an interview at Seasons Center for Behavioral Health in Sioux Center, Iowa. The mental and behavioral health organization has partnered with the Sioux County Sheriff's Office to be on call 24/7 to help the sheriffs department assess people who are struggling with mental health challenges.