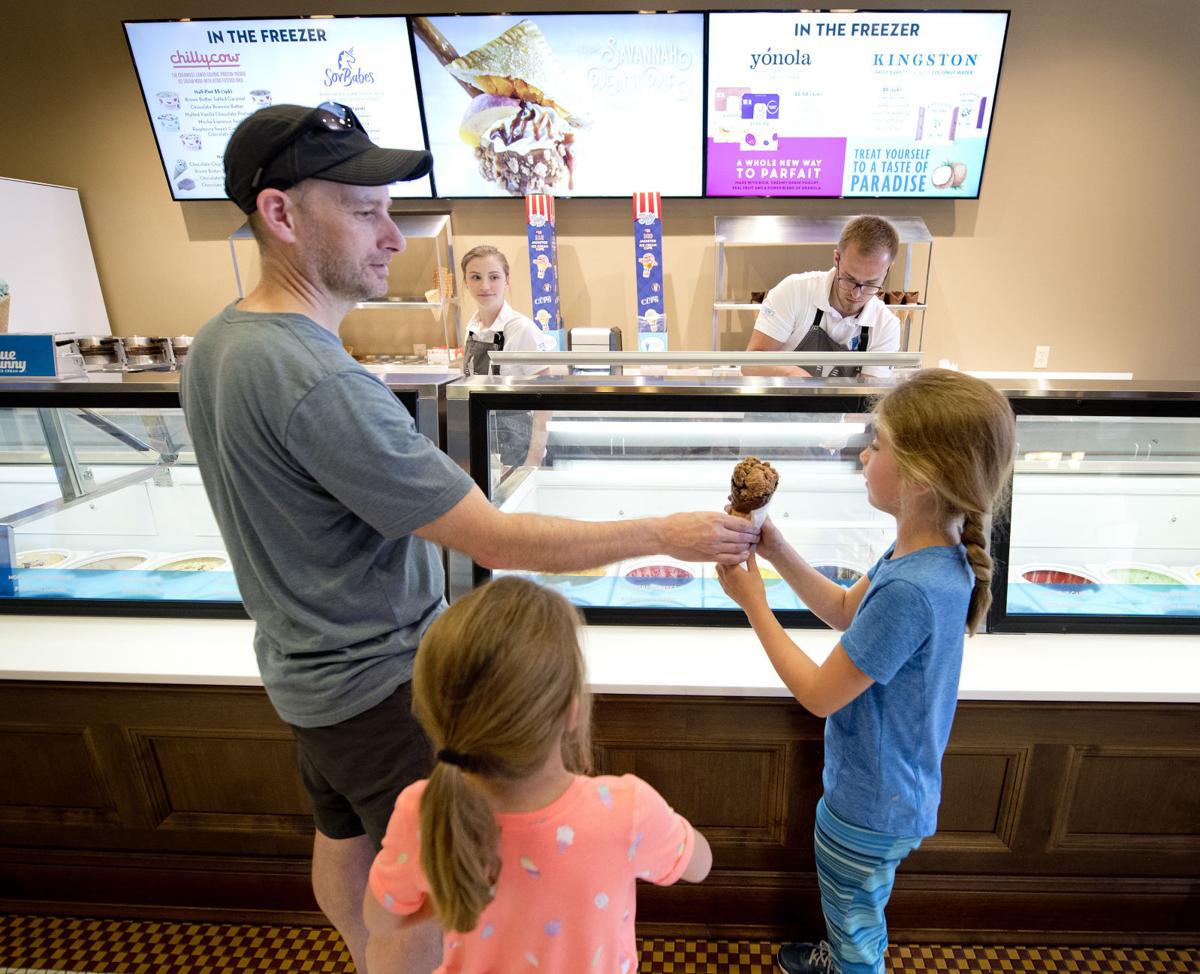 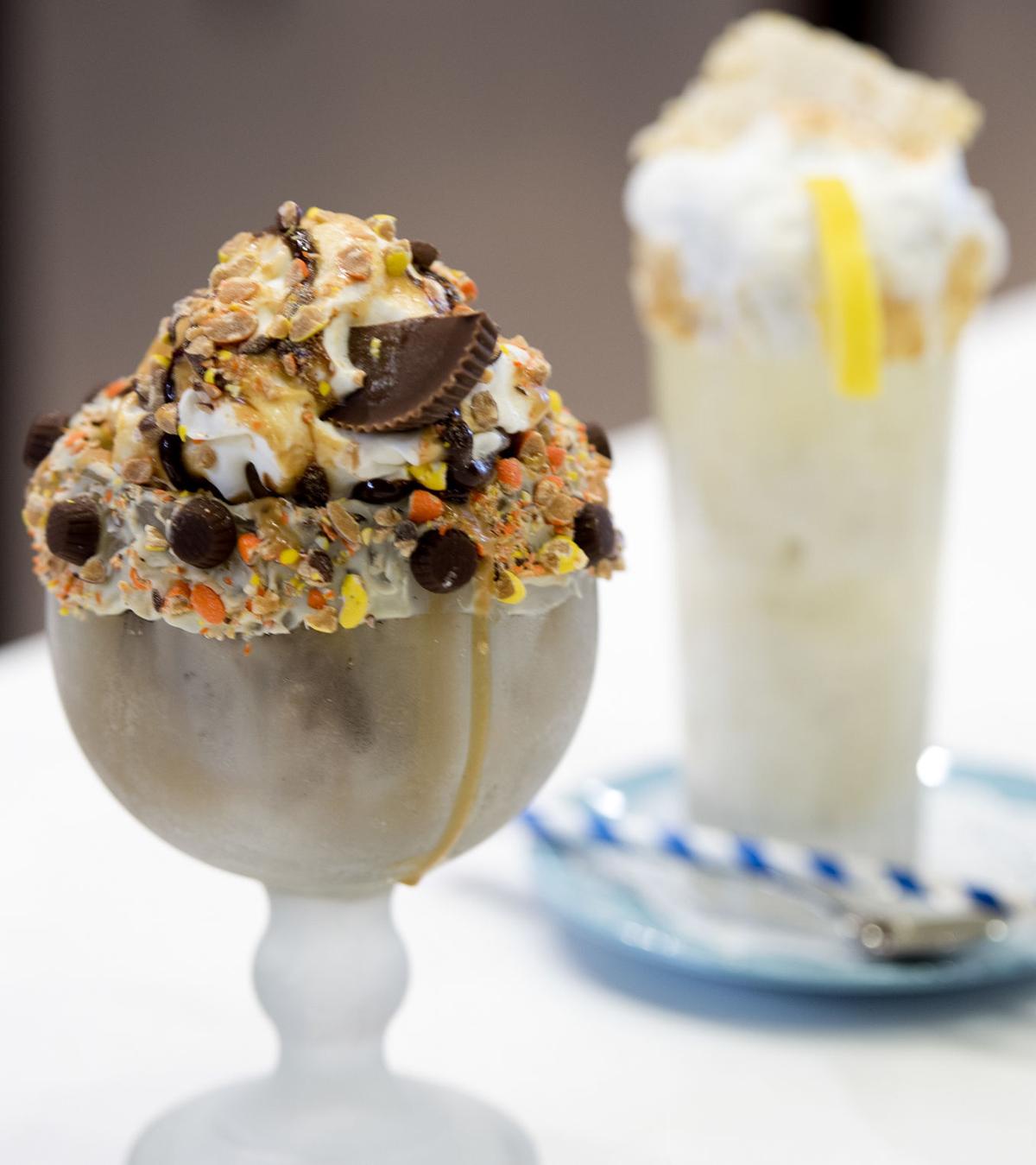 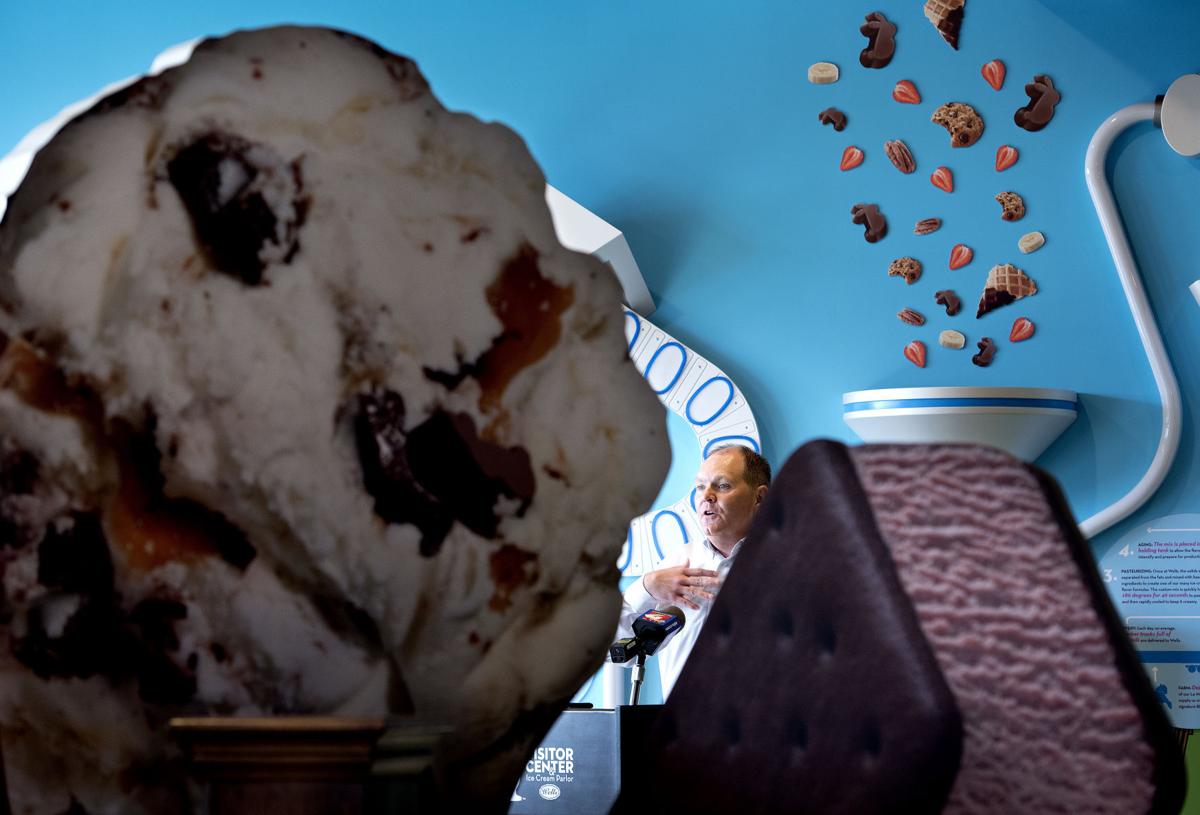 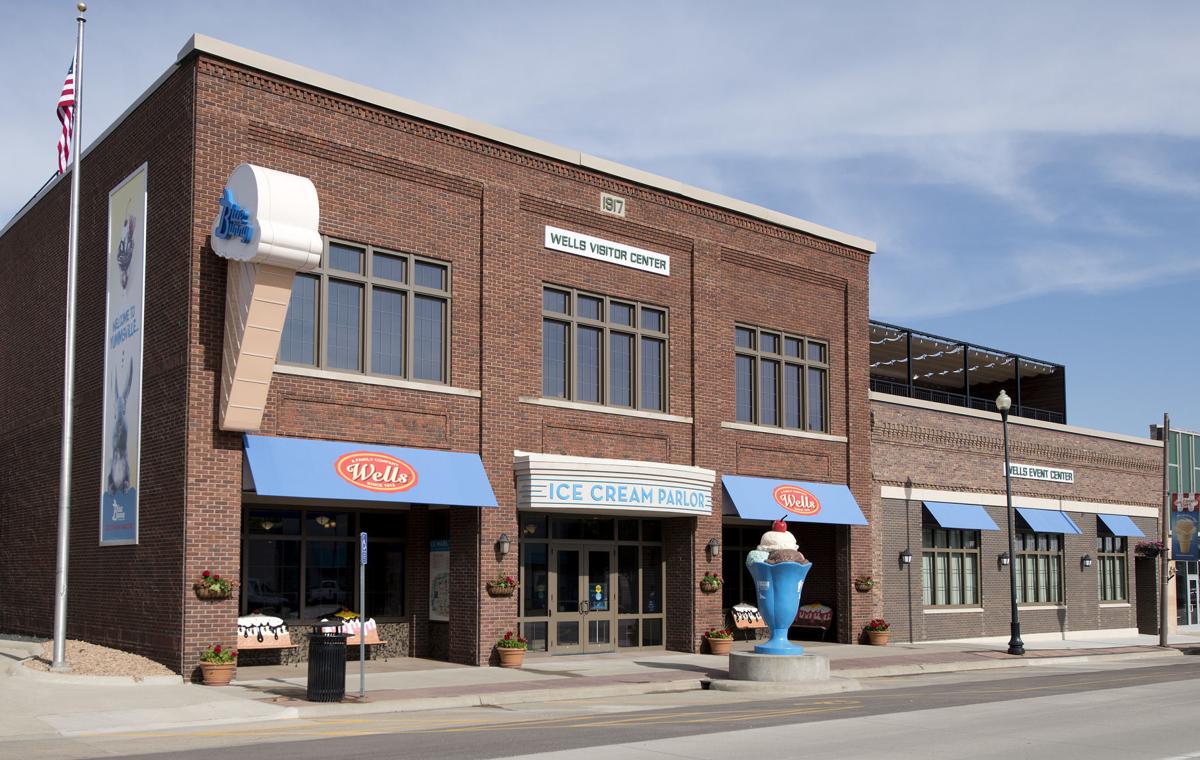 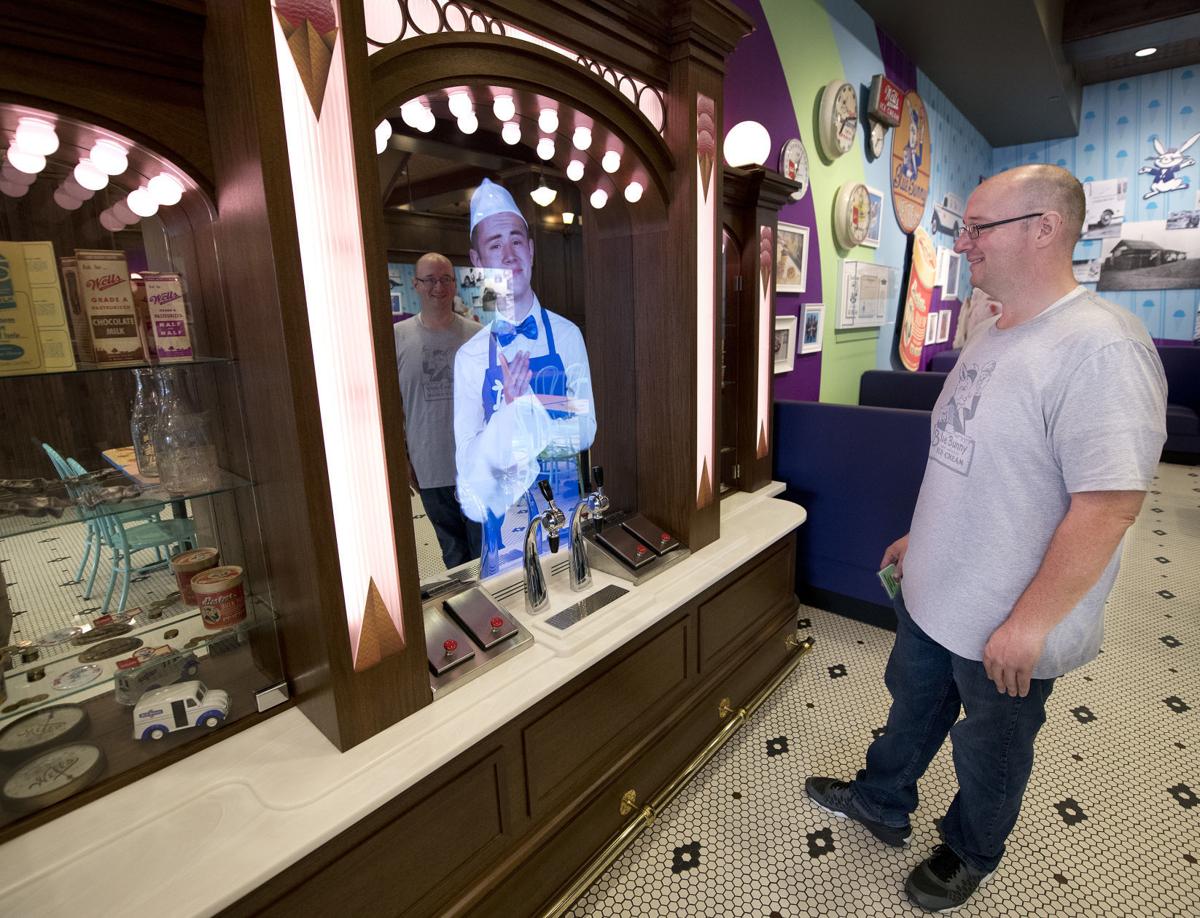 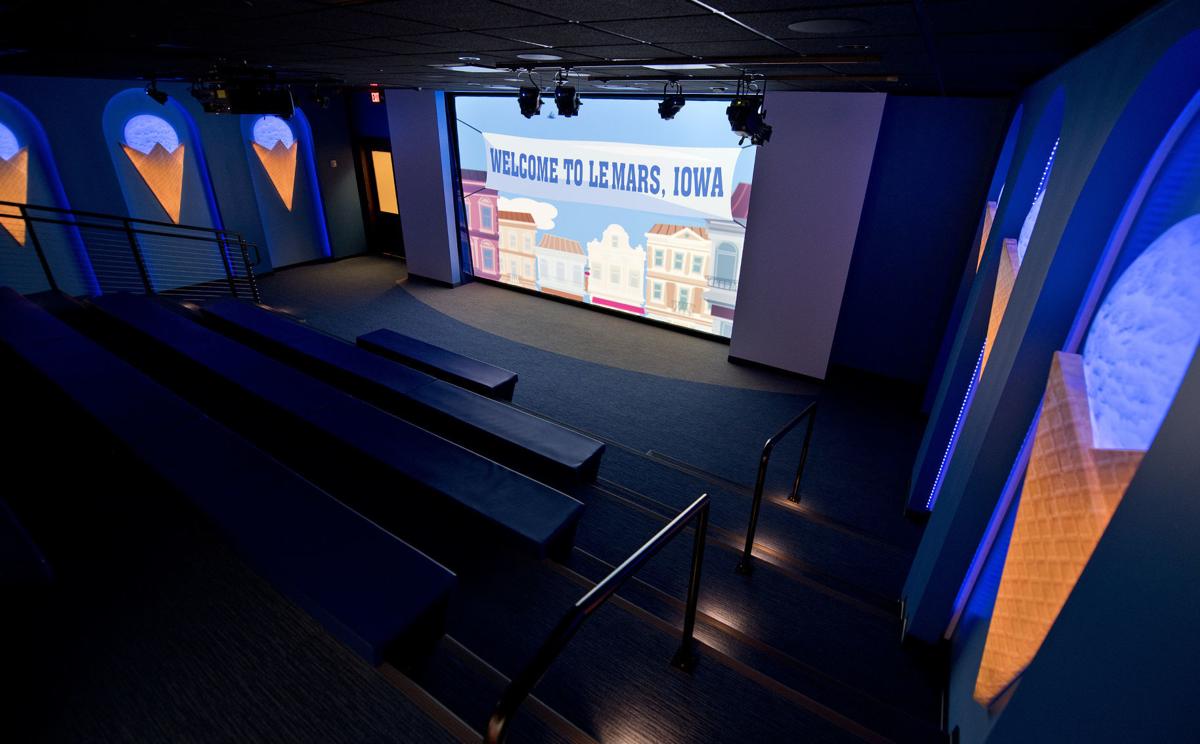 A theater showing a movie outlining the history of Wells Enterprises is shown during a media tour of the remodeled Wells Visitor Center & Ice Cream Parlor Thursday in downtown Le Mars, Iowa.

LE MARS, Iowa – As if were fit for a cotton candy dream from Dr. Seuss’s childhood, or a time-warp to a 1940s downtown soda counter, the newly renovated Visitors Center & Ice Cream Parlor in Le Mars begins greeting visitors Saturday.

Past the lights and gadgets that have been added to the parlor, Adam Baumgartner, Wells Enterprises vice president of retail sales, said the renovation is a message to the city and even the state of Iowa that Wells is here to stay, to make life better for those that come.

“Our commitment and our contributions to this community and this state, and nationally, is really something special,” Baumgartner said, noting that Wells employs more than 3,000 in the Plymouth County seat. “And to be able to be here in our 106th year and thriving and growing and developing, and all of that happening from this really special and really fun community here in Le Mars is something really special.”

At a sneak peak of the renovated parlor for the media Thursday, Leslie Bartholomew, Wells' director of communications, echoed the commitment shared by Baumgartner. Growing up in Sioux City, Bartholomew remembers going to her grandparents’ home in Le Mars, the self-proclaimed Ice Cream Capital of the World. The fridge was always stocked to the brim with Blue Bunny products, Wells' most recognizable brand, including the famous ice cream in the freezer.

“It’s a great organization,” Bartholomew said. “It’s growing … We’re just so fortunate to have an organization of this caliber (in our town.)”

The downtown space that had housed the Wells ice cream parlor and visitors center since 2011 was darker and retrofitted as if it were from an earlier era.

“We wanted to engage more with families,” Bartholomew said. “It wasn’t all that appealing to kids, and we had tons of kids in here … [It was] total vintage and we tried to employ some of that downstairs, but with the bright colors, before it wasn’t so bright.”

Now, the renovations have allowed the ice cream shop to offer a mix of the old “vintage” feel of times gone by and the new innovations of the 21st century.

Between the memorabilia and decades-old ice cream scoops that adorn the walls, visitors can find interactive displays and video screens that describe the 106-year story of Wells, a third-generation family business. A small theater claims the second floor, running a short film on the relationship between Le Mars and Wells on loop.

The visitor center and parlor have been redesigned in several areas, including the construction of a new event center and rooftop patio spaces that will be available for gatherings and meetings. The renovations expanded the parlor’s space by more than 7,000 square feet, now at 18,944 square feet. The parlor's staff has grown from 25 to more than 40.

To Baumgartner, this is only the first step. He shares President and CEO Mike Wells' goal of Wells becoming the nation's largest producer of ice country. Before that,  Baumgartner wants the visitors center and ice cream parlor in Le Mars to be the second largest tourist destination, behind only the state fair in Des Moines.

“We have a few notches to jump, no doubt,” Baumgartner said. “We’re starting here, and that’s why we’re investing in everything that we’ve done … As people are rolling through the area, this has to be on their list. And this is what we’re investing in and trying to get more awareness to.”

But Baumgartner's hopes might be becoming reality sooner than he realized.

Though the parlor won't officially open until Saturday, sales of the frozen treat were registered during Thursday's media day.

After flying nearly 200 miles in his four-seater Cessna plane, Todd Eschweiler and his two daughters, Audrey and Paige, walked up to the counter at the parlor.

Eschweiler had no idea the ice cream shop was reopening following renovations, or that it had even been closed in the first place. All he knew was that he and his daughters wanted ice cream.

LE MARS, Iowa -- Did you know that Le Mars was once called St. Paul Junction? And that the name Le Mars came from a group of women riding a pa…

Heading to Le Mars for Ice Cream Days and its sesquicentennial celebration? We have you covered.

BRONSON, Iowa -- Over the last few years, Heather Hennings and her husband, Eric, pondered what to do with the former offices and warehouse of…

Set to open during the second week of September - Friday, Sept. 13 is a distinct possibility - the two Le Mars natives say the time is right for local beer.

SIOUX CITY -- After hearing about the project many months ago, Kortney Barbee immediately noticed new lighting along the Historic Fourth Stree…

A theater showing a movie outlining the history of Wells Enterprises is shown during a media tour of the remodeled Wells Visitor Center & Ice Cream Parlor Thursday in downtown Le Mars, Iowa.