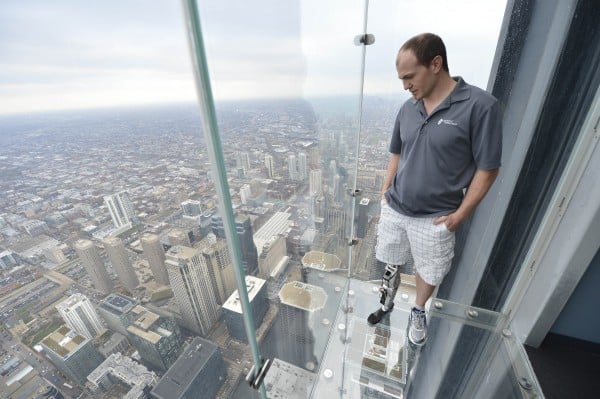 Zac Vawter, fitted with an experimental "bionic" leg, looks down from the Ledge at the Willis Tower in Chicago. Vawter is training for the world's tallest stair-climbing event where he'll attempt to climb 103 flights to the top of theWillis Tower using the new prosthesis. 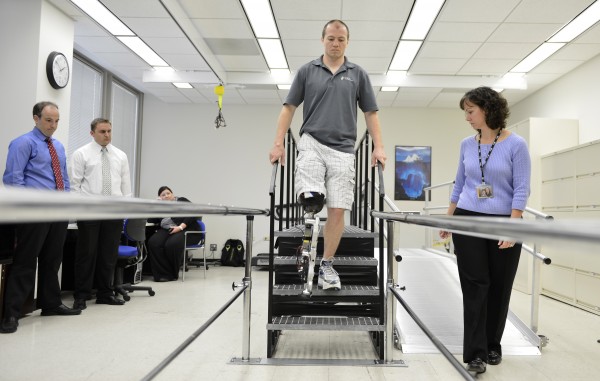 CHICAGO | Zac Vawter considers himself a test pilot. After losing his right leg in a motorcycle accident, the 31-year-old software engineer signed up to become a research subject, helping to test a trailblazing prosthetic leg that's controlled by his thoughts.

He will put this groundbreaking bionic leg to the ultimate test Sunday when he attempts to climb 103 flights of stairs to the top of Chicago's Willis Tower, one of the world's tallest skyscrapers.

If all goes well, he'll make history with the bionic leg's public debut. His whirring, robotic leg will respond to electrical impulses from muscles in his hamstring. Vawter will think, "Climb stairs," and the motors, belts and chains in his leg will synchronize the movements of its ankle and knee. Vawter hopes to make it to the top in an hour, longer than it would've taken before his amputation, less time than it would take with his normal prosthetic leg — or, as he calls it, his "dumb" leg.

A team of researchers will be cheering him on and noting the smart leg's performance. When Vawter goes home to Yelm, Wash., where he lives with his wife and two children, the experimental leg will stay behind in Chicago. Researchers will continue to refine its steering. Taking it to the market is still years away.

"Somewhere down the road, it will benefit me and I hope it will benefit a lot of other people as well," Vawter said about the research at the Rehabilitation Institute of Chicago.

Bionic — or thought-controlled — prosthetic arms have been available for a few years, thanks to pioneering work done at the Rehabilitation Institute. With leg amputees outnumbering people who've lost arms and hands, the Chicago researchers are focusing more on lower limbs. Safety is important. If a bionic hand fails, a person drops a glass of water. If a bionic leg fails, a person falls down stairs.

The Willis Tower climb will be the bionic leg's first test in the public eye, said lead researcher Levi Hargrove of the institute's Center for Bionic Medicine. The climb, called "SkyRise Chicago," is a fundraiser for the institute with about 2,700 people climbing. This is the first time the climb has played a role in the facility's research.

To prepare, Vawter and the scientists have spent hours adjusting the leg's movements. On one recent day, 11 electrodes placed on the skin of Vawter's thigh fed data to the bionic leg's microcomputer. The researchers turned over the "steering" to Vawter.

He kicked a soccer ball, walked around the room and climbed stairs. The researchers beamed.

Vawter likes the bionic leg. Compared to his regular prosthetic, it's more responsive and more fluid. As an engineer, he enjoys learning how the leg works.

It started with surgery in 2009. When Vawter's leg was amputated, a surgeon repositioned the residual spaghetti-like nerves that normally would carry signals to the lower leg and sewed them to new spots on his hamstring. That would allow Vawter one day to be able to use a bionic leg, even though the technology was years away.

The surgery is called "targeted muscle reinnervation" and it's like "rewiring the patient," Hargrove said. "And now when he just thinks about moving his ankle, his hamstring moves and we're able to tell the prosthesis how to move appropriately."

To one generation it sounds like "The Six Million Dollar Man," a 1970s TV show featuring a rebuilt hero. A younger generation may think of Luke Skywalker's bionic hand.

But Hargrove's inspiration came not from fiction, but from his fellow Canadian Terry Fox, who attempted a cross-country run on a regular artificial leg to raise money for cancer research in 1980.

"I've run marathons, and when you're in pain, you just think about Terry Fox who did it with a wooden leg and made it halfway across Canada before cancer returned," Hargrove said.

Experts not involved in the project say the Chicago research is on the leading edge. Most artificial legs are passive. "They're basically fancy wooden legs," said Daniel Ferris of the University of Michigan. Others have motorized or mechanical components but don't respond to the electrical impulses caused by thought.

"This is a step beyond the state of the art," Ferris said. "If they can achieve it, it's very noteworthy and suggests in the next 10 years or so there will be good commercial devices out there."

Vawter and the Chicago researchers recently took the elevator to the 103rd floor of the Willis Tower to see the view after an afternoon of work in the lab. Hargrove and Vawter bantered in the elevator in anticipation of Sunday's event.

Hargrove: "Am I allowed to trash talk you?"

"It's fine," Vawter shot back. "I'll just defer it all to the leg that you built."

At the top, Vawter stood on a glass balcony overlooking the city. The next time he heads to the top, he and the bionic leg will take the stairs.

Fla. woman is first in U.S. to be fitted with bionic arm

Weeks after becoming the first woman nationally to be fitted with an i-limb quantum bionic arm, Lizbeth Uzcategui continues to discover — and surprise herself with — what she can do.

Zac Vawter, fitted with an experimental "bionic" leg, looks down from the Ledge at the Willis Tower in Chicago. Vawter is training for the world's tallest stair-climbing event where he'll attempt to climb 103 flights to the top of theWillis Tower using the new prosthesis.