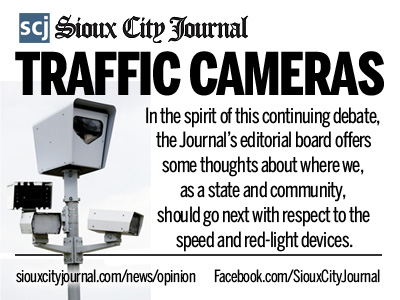 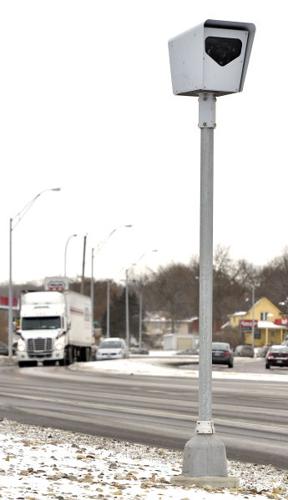 We recall few local issues that have produced as much emotion and discussion as traffic cameras.

To be honest, we don't get it. If you follow the posted speed signs and stop for red lights, you won't have a problem with speed and red-light cameras.

Nonetheless, here we are, still debating and arguing (and writing) about them, from Des Moines to Sioux City, years after they first went into use, with no sign of letup.

So in the spirit of this continuing debate, we today offer our thoughts on what we, as a state and community, should do next with respect to these devices.

- The state of Iowa needs to make up its mind, once and for all, about whether to allow or ban traffic cameras, and stop talking and tinkering at the edges of the issue. The Legislature should demonstrate leadership, vote them up or down, then move on to more important business.

We would prefer the Legislature continue to allow traffic cameras, but establish a uniform set of reasonable rules for them, including fines, across the state. If cameras remain legal, we believe decisions about where to place them should be left to local municipalities, not the Iowa Department of Transportation, even on state roads within city limits.

- If cameras remain legal in Iowa, we have no problem with Sioux City keeping the speed and red-light cameras we already have in place, but we do not wish to see additional proliferation of them, particularly with respect to speed cameras.

At some point, you reach a saturation point where you have enough of these cameras. In our view, we have reached this limit in our community.

During a budget meeting earlier this month, the City Council briefly discussed the possibility of moving its two speed-enforcement cameras from along Interstate 29 to places where they would not fall under new IDOT rules, but no decision was made.

"I would be supportive of taking a look at traffic indicators in city streets that the state doesn't control," Councilman Pete Groetken said. "If we can take advantage of that technology to make the community safer, I can't for the life of me understand why we wouldn't want to do that."

For starters, councilman, because doing this would exceed the limited scope under which the cameras were sold to the public (to slow down traffic during the multi-phase reconstruction of Interstate 29) and would, without doubt, fuel the criticism traffic cameras are about revenue, not safety.

The ill-advised idea of moving speed cameras or expanding use of them to other locations should die on the vine.

- The city should learn lessons about use of revenue produced by traffic cameras.

From the beginning we have supported limited use in Sioux City of red-light cameras as well as speed cameras along I-29 during construction, for reasons of public safety.

However, we believe the city has become too reliant on revenue from them for ongoing expenses, as evidenced by difficult City Council discussions about the budget for the next fiscal year.

Money generated by traffic cameras should be viewed as extra cash and used only for special, one-time expenditures, particularly in the area of public safety.

If speed and red-light cameras are working as intended by making drivers better at slowing down in the I-29 construction zone and stopping for red lights, the city should plan on a decline over time in the revenue they produce.

Red-light cameras at two Sioux City intersections will be out of commission this summer due to road construction.

Decisions about red-light and speed cameras within city limits should be left to individual municipalities, not the state.

OUR OPINION: Why are the I-29 speed cameras turned on?

Why are speed cameras operating on Interstate 29 in Sioux City when no road construction is taking place?

Scientists: Why there's more light than there should be in the universe

The reason Japanese fans clean up after World Cup matches

The reason Japanese fans clean up after World Cup matches

A winter wonderland in Denmark? Why you should visit Tivoli Gardens in December

A winter wonderland in Denmark? Why you should visit Tivoli Gardens in December