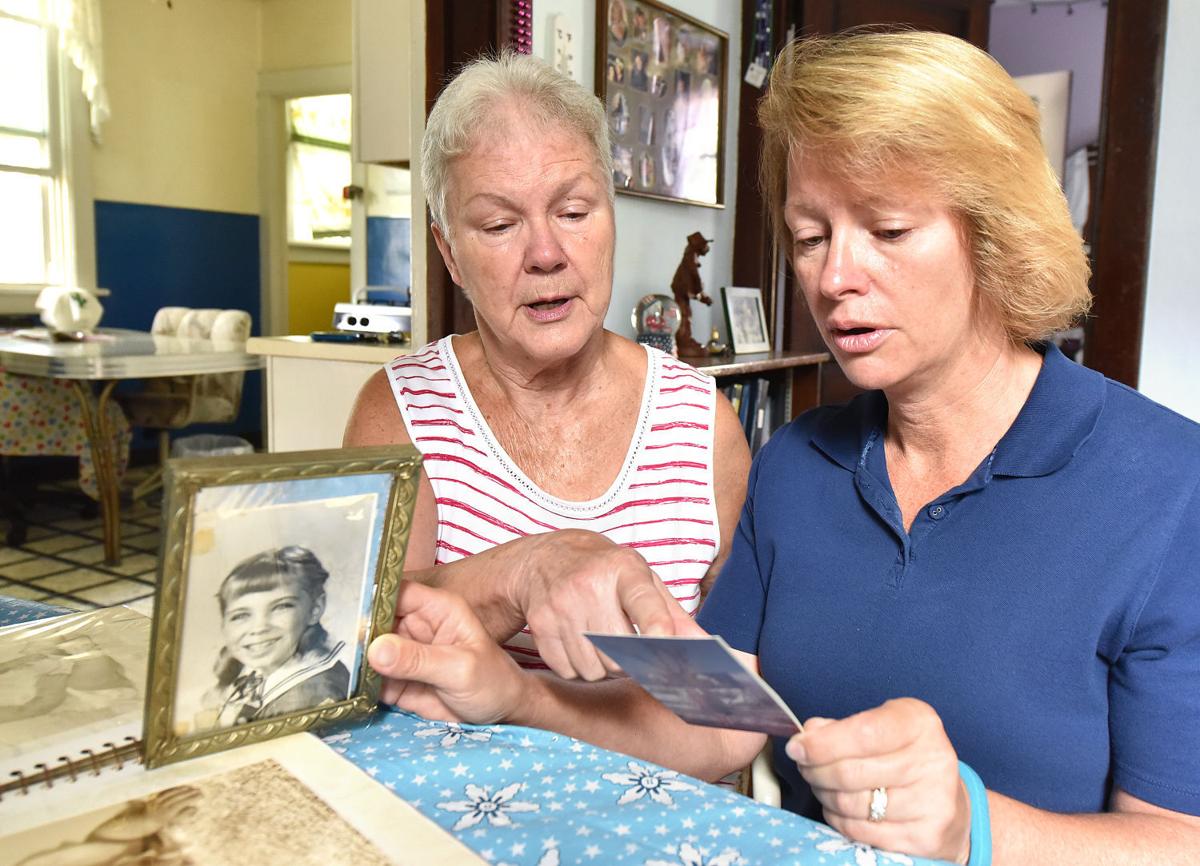 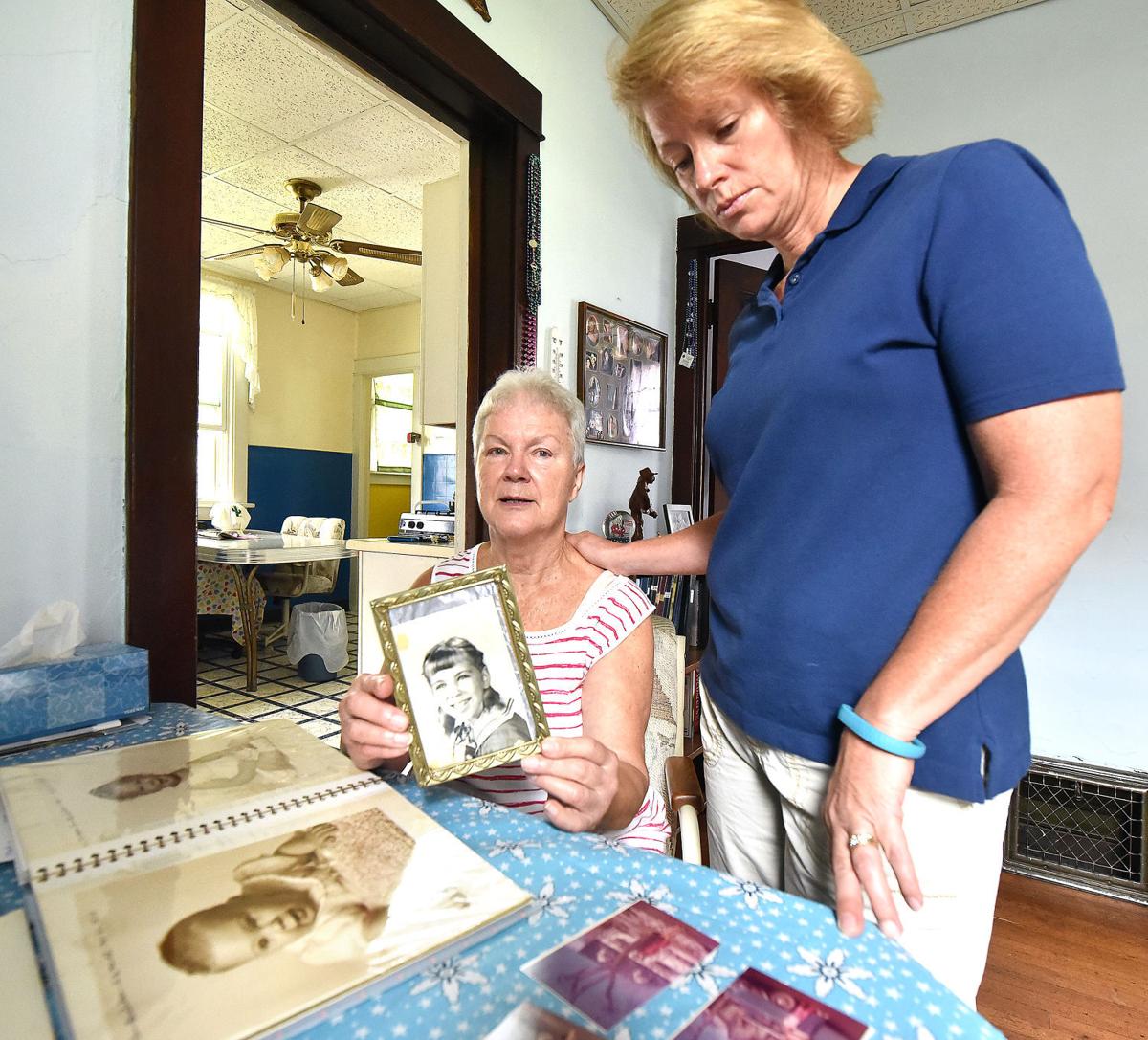 Lisa Schenzel, right, rests her hand on the shoulder of her mother, Mary Ann Brubaker, as the two look over photographs of Maureen Brubaker-Farley Sept. 8 in Mary Ann Brubaker's Sioux City home. Maureen, Lisa's sister and Mary Ann's daughter, was killed in 1971 in Cedar Rapids, Iowa, and her murder has never been solved.

SIOUX CITY | Lisa Schenzel remembers when her older sister taught her the words to “Silver Bells” on car rides over the Gordon Drive viaduct in Sioux City.

Learning that Christmas song is the earliest memory Schenzel has of her 17-year-old sister, Maureen Brubaker-Farley, who disappeared 44 years ago on Sept. 21 and was later found dead in Cedar Rapids, Iowa.

“Every time I hear that song, I flashback to sitting on her lap in her car and her teaching me that,” said Schenzel, 48, who now lives in McCook Lake. “She took me places with her quite a bit.”

Schenzel's next memory is answering the phone, as a child, at their parents’ house in Sioux City. A police officer on the other end asked whether mom or dad was home. The girls' mother, Mary Ann Brubaker -- a hard-working farm girl from Anthon, Iowa -- picked up the telephone receiver.

“They found her. They found Maureen. She’s dead," Brubaker told her family.

Brubaker, now 80, said her daughter moved to Cedar Rapids to be closer to her husband, David Farley, who was serving a prison term at Anamosa State Penitentiary, which is about 26 miles northwest of the city.

“She was very lonely down there because David was in prison,” Brubaker said.

The family learned that Brubaker-Farley didn’t show up to work to pick up a paycheck on Sept. 17, 1971, at Wida’s Cafe in Cedar Rapids. Three days later, her employer reported her missing. The next day, two boys discovered her body on the truck of an abandoned car in rural Cedar Rapids.

According to the Linn County medical examiner, Brubaker-Farley was killed by blunt force injuries to her head, which fractured her skull. Cedar Rapids police believe she died somewhere else.

Violet Fowler, mother of one of the boys who found the victim’s body, wrote in an Oct. 15, 1971, letter to the victim's mother that an officer described her daughter’s face as “black and swollen.” Months passed and authorities weren’t able to find a potential murder weapon used to cause the head trauma.

On March 3, 1972, Cedar Rapids Police Chief George J. Matias wrote to the girls’ mother that “… it is with deep regret that I must inform you as of this date, we have not apprehended the party involved in your daughter’s death.”

Part of their work includes re-interviewing witnesses and examining evidence a second time. But no new information was available about the Brubaker-Farley case, said Greg M. Buelow, a Cedar Rapids police spokesman.

Said Choate: “Relationships and circumstances change, so new information may become available about a case that will be reviewed."

Meanwhile, Brubaker-Farley’s family is just looking for any answer that can bring closure. Brubaker wants to know the specifics in her daughter's death, something police haven't figured out.

During an interview at her house in Sioux City, Brubaker laughed and theorized that maybe her daughter always lived life in the fast lane because she knew she would die young. But, she said, that’s really just a guess.

Forecast: Sun to shine on Siouxland this weekend

Bad news for people who are happy only when it rains – sunny days are headed this way.

McCOOK LAKE, S.D. -- After 50 years of wondering if her daughter's killer would ever be found, Mary Ann Brubaker finally received an answer la…

Lisa Schenzel, right, rests her hand on the shoulder of her mother, Mary Ann Brubaker, as the two look over photographs of Maureen Brubaker-Farley Sept. 8 in Mary Ann Brubaker's Sioux City home. Maureen, Lisa's sister and Mary Ann's daughter, was killed in 1971 in Cedar Rapids, Iowa, and her murder has never been solved.