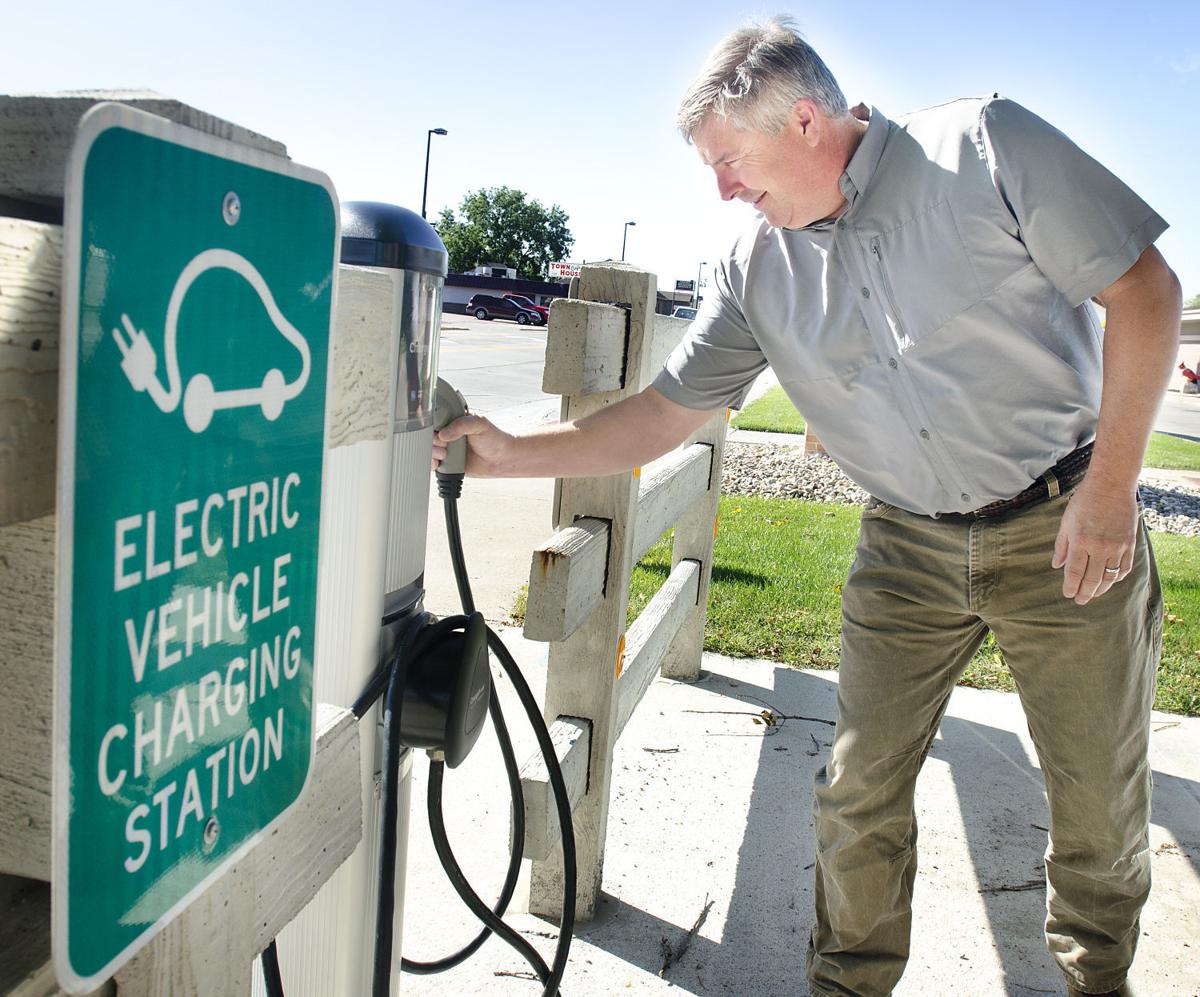 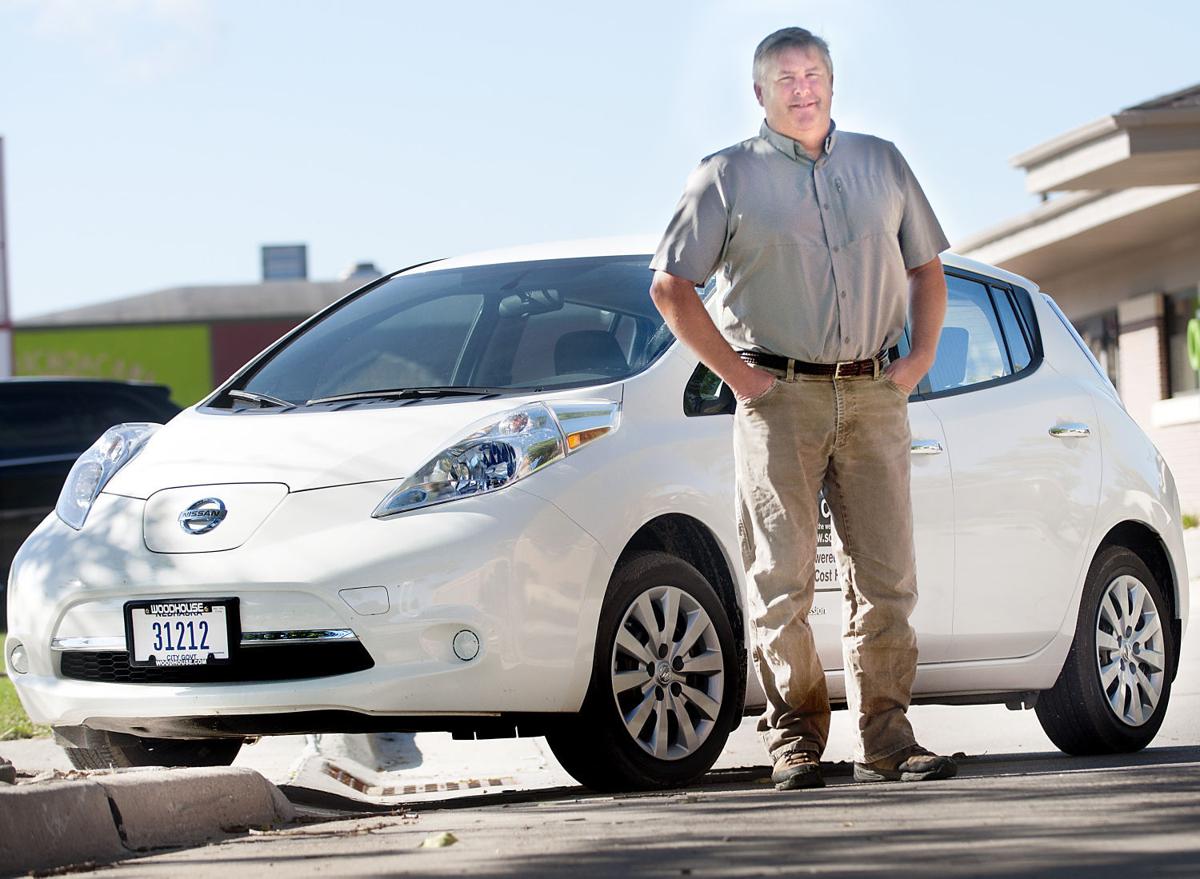 South Sioux City senior code official Kent Zimmerman is shown with one of the city's four Nissan Leaf electric cars Friday. The city has the largest municipal fleet of electric cars -- four -- in Nebraska. The investment is part of the city's move toward using more renewable energy.

SOUTH SIOUX CITY, Neb. | Kent Zimmerman, code enforcement officer for the city of South Sioux City, often hops into one the city's Nissan Leaf electric cars when he heads out on various appointments.

The Leafs don't require key to start. Zimmerman simply pushes a button and the motor quietly whines to life.

There is no noticeable thrum of an engine – the power consumption for the vehicle costs an average of $300 a year. A charging station, similar to a gas pump but with an electric plug, sits outside City Hall.

“They actually have a little zoom to them, but we drive slow to conserve energy,” Zimmerman said with a laugh.

The city purchased four Leafs at a cost of about $7,000 each. While small in number, it's the largest municipal fleet of electric cars in Nebraska, City Administrator Lance Hedquist said proudly.

The investment is part of the city's strategy to move toward cleaner, more renewable forms of energy.

The city plans to buy solar and wind power, allowing the municipal electrical system to reduce the wholesale power it obtains from coal-fired plants.

“We wish to stabilize our energy prices while taking advantage of the benefit towards the environment,” Hedquist said.

Mayor Rod Koch was upbeat on the city’s drive to be green, which he described not only as money-smart but also ahead of the curve.

“With all the regulations and changes Washington’s making on coal, we’re seeing the writing on the wall – we’re trying to get in a better position for the future, and the future is wind and solar,” Koch said.

On another renewable energy front, the city is preparing to buy a wood gasification electrical-generation system to power the city’s Scenic Park campground along the Missouri River.

City leaders have released few details of the gasification project, which is believed to be one of the first of its kind in the region. Hedquist recently told the Sioux City Rotary Club it would involve grinding and burning fallen tree branches, limbs and brush the city picks up not only along the riverfront but also from residential yards around town.

The Sierra Club's Beyond Coal Campaign in Nebraska recently issued a news release that praised South Sioux City's decision to "wind down" its longstanding relationship with Nebraska Public Power District, in favor of a partnership with Lincoln Electric System, or LES.

"It was a good investment for consumers," Rosenwasser said. "It's cool to see a city embracing clean, renewable options. It makes the city attractive for businesses."

In January, the South Sioux City Council voted to reduce by 30 percent the power it gets from NPPD, the state's largest utility, beginning Jan. 1, 2018.

Earlier this month, the council approved a six-year contract to buy electrical capacity from LES, a publicly owned utility that services Lincoln. As a result of recent large investments in wind and solar projects, LES expects renewable energy to account for 48 percent of its total power output by 2016.

Hedquist said the city expects the deal to save city electricity customers at least $1.5 million a year.

By 2018, the city anticipates LES will provide 15 megawatts of electrical capacity. NPPD would account for 63 percent of the city's mix of energy sources, while 7 percent would come from hydraulic-electrical dams and 30 percent from other sources, which include renewables, Hedquist said.

The city has set aside 21 acres of land -- on C Avenue south of East 48th Street, between South Sioux City and Dakota City -- for a future solar farm that could be operational in 2016. The city is receiving bids from private companies that would build, own and install solar panels. The farm would provide 3 megawatts of solar power for the city.

Because of the city’s low-lying terrain, officials are looking to buy wind power from wind farms elsewhere, Hedquist said.

“We live in a valley here, and having our own turbines just wouldn’t work,” Hedquist said.

"People here are excited about what we're doing for the future," Hedquist said. "I think it's something to be proud about."

While lowering the city’s carbon footprint is a benefit, having a diversified take on renewable energies will also lead to cheaper bills, Koch said, within reason. The mayor thinks the city’s steps on the subject have been at the right pace, as well.

“I don’t want to increase my electric rate just because I can say we have more wind power,” Koch said. “But we know clean energy is the way of the future, and we want to be part of that.”

Acres of land on C Avenue planned for a solar farm

Check out these amazing secret tunnels built under Liverpool

Check out these amazing secret tunnels built under Liverpool

The South Sioux City Council approved a $72.6 million city budget that includes a 1.3 percent decrease in the city's share of property taxes.

Beginning March 1, landlords in South Sioux City will have their rental properties inspected under a new ordinance passed Monday by the City Council.

To celebrate the third annual National Bioenergy Day, South Sioux City officials gathered to demonstrate a replica of a wood biomass system and generator that will be installed at Scenic Park Campground.

The South Sioux City Council on Monday debated, then rejected adding an exemption to its new rental inspection ordinance that would have waived permit fees for landlords who rent homes to family members.

Labor unions grew in Iowa and South Dakota, despite a continued national decline in membership since they peaked in the late 1970s, according to a U.S. Bureau of Labor Statistics report.

The Siouxland Tennis Association announced Friday it will choose among several sites along South Sioux City's Missouri Riverfront as the spot for its planned indoor, community-based tennis facility.

SOUTH SIOUX CITY | A ribbon cutting for the newly installed gasification system that will utilize wood waste in Scenic Park is set for 10:15 a…

South Sioux City senior code official Kent Zimmerman is shown with one of the city's four Nissan Leaf electric cars Friday. The city has the largest municipal fleet of electric cars -- four -- in Nebraska. The investment is part of the city's move toward using more renewable energy.