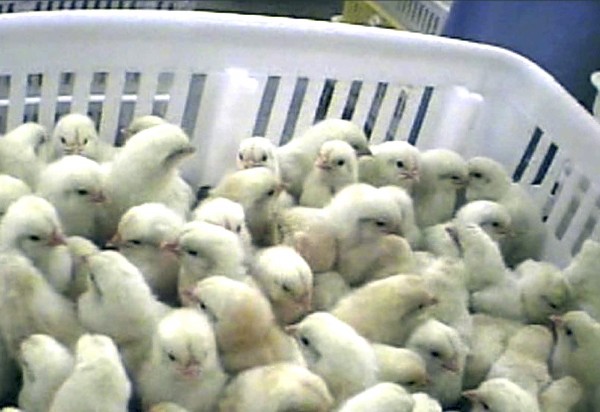 This file photo provided Sept. 1, 2009, by Mercy for Animals, shows a frame grab from a video made by an undercover member of the group of chicks corralled at Hy-Line North America’s hatchery in Spencer, Iowa. 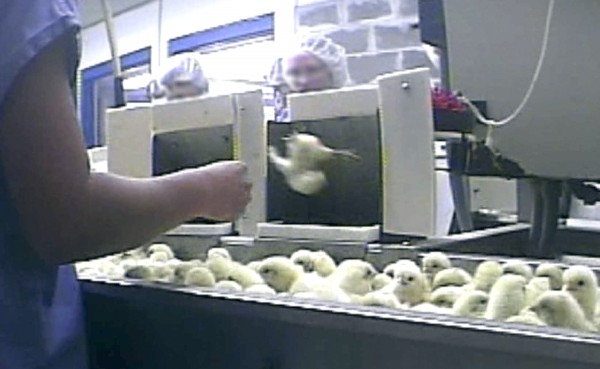 This file photo provided Sept. 1, 2009, by Mercy for Animals, shows a frame grab from a video made by an undercover member of the group of male chicks being tossed into a grinder at an Iowa hatchery. The Iowa Senate Tuesday passed a farm fraud bill aimed at fighting animal rights activists.

DES MOINES - Iowa is on the verge of becoming the first state to criminalize recording farm sights and sounds without prior permission from the farmer or business owner.

It's become a hot-button issue in the waning days of the legislative session, one that pits environmental and animal rights activists against farmers and agribusiness interests.

On one side are the activists who surreptitiously record how animals are kept or slaughtered on farms. On the other side are the farm owners who don't want them to do that.

The activists say their actions are protected under the First Amendment. The farmers say it's an invasion of privacy made intentionally to damage the industry.

"They want to hurt an important part of our economy," said Sen. Tom Rielly, D-Oskaloosa. "These people don't want us to have eggs; they don't want people to eat meat."

Rielly is working on an amendment to the legislation that has already passed the House with bipartisan support. He said it will likely get a hearing in the Senate still this session.

If it passes there and the House agrees to amended Senate version, it goes onto the governor for his signature.

Spokesman Tim Albrecht said Gov. Terry Branstad will wait until he sees the final version of the bill before he lends it support. Still, he said, Branstad "believes undercover filming is a problem that should be addressed, yes."

Similar legislation has previously moved in the Colorado, Texas and Missouri statehouses, but it has never become law.

This year, lawmakers in Florida, Minnesota and Iowa have proposed bills, but only Iowa's and Minnesota's versions of the bill are still alive.

And each time legislation moves, animal rights groups move in. In Iowa's case, Chicago-based Mercy for Animals came first, then came the better-known People for the Ethical Treatment of Animals.

Both groups held news conferences where they screened graphic videos taken by undercover group members at factory farms. Both groups urged lawmakers not to support the efforts that would curtail their ability to make such videos. Both also said legal action was an option.

Dan Mathews, senior vice president for PETA, was in Minnesota on Tuesday. He said he had a meeting with Sen. Doug Magnus, the sponsor of the legislation there, who indicated the bill would not go through this session. A call Magnus's office was not returned.

"With lawmakers in other ag states wanting these bills to die, the ongoing debate in Iowa makes it appear like the farmers there have more to hide," Mathews said. "That doesn't seem like a sensible promotion of Iowa agriculture."

Mathews then helped set up an email from Republican strategist Mary Matalin that went to House Republican leadership on Thursday.

"Greetings. I'm sorry to hear that House File 589, which would criminalize filming on farms, is still getting pushed along in Iowa," Matalin's letter begins. After a few more sentences, she concludes: "If House File 589 succeeds, it may well single Iowa out as the state with something to hide, which I know can't be the case."

Rielly said it's not about hiding anything.

"What we're aiming at is stopping these groups that go out and gin up campaigns that they use to raise money by trying to give the agriculture industry a bad name," he said.

Ronald Birkenholz, spokesman for the Iowa Pork Producers Association, said his organization supports the legislation because it helps protect producers from unscrupulous attacks. Heather Lilienthal, spokeswoman for the Iowa Farm Bureau, said her organization's support is based on the belief that it will help farmers, "but we won't have anything new to add until we see the final version of the bill."

It's the language in the final bill that is turning out to be tricky.

Rebecca Zietlow, a visiting professor of constitutional law at the University of Iowa, said the main problem with what lawmakers are considering has to do with prior restraint.

That is it infringes on free speech because it attempts to prevent that speech from happening even before it exists.

"The courts have generally said we should let the speech come out and then let the chips fall where they may," she said.

SIOUX CITY -- Folks looking to get booster doses of the COVID-19 vaccine now have another option to consider.

AMES, Iowa (AP) — An Ames park will now be named Ioway Creek Park to align with the creek’s name change earlier this year.

BOONE, Iowa (AP) — An Iowa police officer died in a car crash while he was off duty this weekend.

DES MOINES, Iowa (AP) — Two southeast Iowa teenagers charged with first-degree murder and conspiracy to commit murder in the death of their hi…

CENTERVILLE, Iowa (AP) — A person was killed Sunday after authorities were called to a Centerville area home to check on a reported assault, s…

Iowa hospital says some kids were given wrong vaccine dose

URBANDALE, Iowa (AP) — An Iowa hospital says it is implementing procedures to ensure it doesn't repeat a mistake made last weekend, when more …

IOWA CITY, Iowa (AP) — A former manager for an influential Iowa-based pork dealer has died in a crash, days after federal prosecutors charged …

This file photo provided Sept. 1, 2009, by Mercy for Animals, shows a frame grab from a video made by an undercover member of the group of chicks corralled at Hy-Line North America’s hatchery in Spencer, Iowa.

This file photo provided Sept. 1, 2009, by Mercy for Animals, shows a frame grab from a video made by an undercover member of the group of male chicks being tossed into a grinder at an Iowa hatchery. The Iowa Senate Tuesday passed a farm fraud bill aimed at fighting animal rights activists.