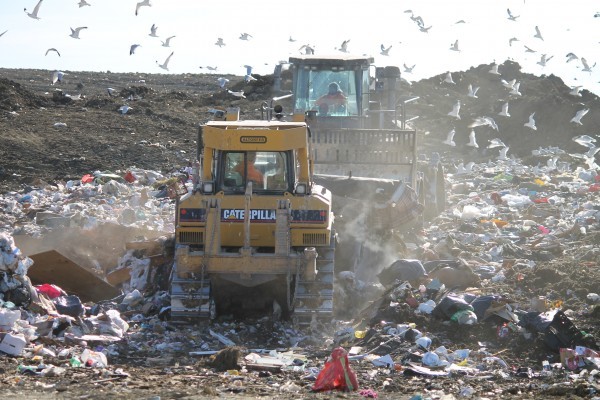 Equipment moves trash at the Scott Area Landfill near Daveport, Iowa, in December. In some Iowa garbage facilities, more than 75 percent of what's put in could have been recycled. 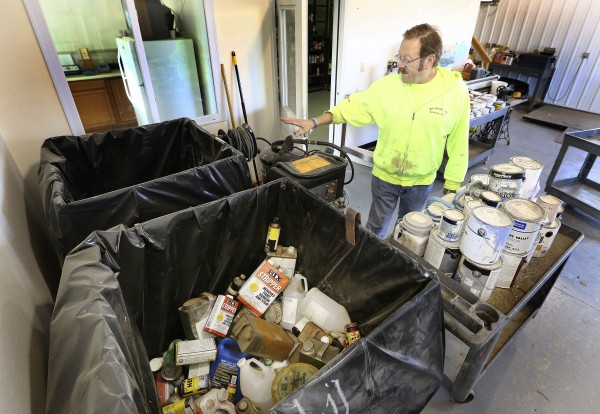 Doug Mallette, of Gill Hauling, sorts through items brought to the Sioux City Citizen Convenience Center in November. Nearly 81,000 tons of Iowa's garbage was trucked out of the state last fiscal year.

SIOUX CITY | More than half of what Iowans put into landfills could have been recycled or composted. The amount in some areas is as high as 75 percent, landfill operators said.

An IowaWatch investigation revealed that the gap between tons dumped into the ground and tons recycled at Iowa's top five waste agencies is widening.

And unless something changes, it's set to stay that way because of a lack of available recycling programs, the way recycling and landfill programs are funded by the state, and poor record keeping.

"If recycling doesn't happen, landfills will fill up faster, and the cost for garbage will go up," said Reo Menning, of the Metro Waste Authority near Mitchellville.

More than 2.86 million tons of trash were put in Iowa landfills between July 2011 and June 30, the most recent period for which state Department of Natural Resources data is available.

The amount of garbage has remained steady for a decade, even as the percentage of refuse being recycled decreases.

The Cedar Rapids/Linn County Solid Waste Agency, one of Iowa's top five landfills, had a recycling rate of 9.1 percent of what was deposited into the ground in 2002. As of last year, the rate had fallen to 5.4 percent. The Scott Area Landfill recycling rate dropped from 8.8 percent of what was dumped into landfills to 5.3 percent during that time.

One-fourth of all garbage taken to a landfill in fiscal 2011 was organic material -- food and yard waste, textiles, leather, diapers and rubber, according to a 2011 Iowa Statewide Waste Characterization Study conducted by the Iowa DNR. Data for 2012 were incomplete.

Environmental scientists say this organic material should be diverted from landfills because it produces the greenhouse gas methane while decomposing in the ground without oxygen.

The state's waste study showed that at Iowa City's landfill and recycling center, which has an aggressive recycling program, 27.5 percent of waste is paper, 25.4 is organic material and 21.3 percent is plastic.

This marks the 25th year of Iowa's recycling program. That program also initiated what is known as the tonnage fee. By law, landfills must pay the state DNR fees for each ton of waste that enters their facility. Fees range from $3.25 to $4.25, depending on the landfill's recycling efforts.

Most Siouxland trash and recycling services, including for Sioux City residents, are handled by Gill Hauling. The company's Jackson, Neb., landfill processed 220,882 tons of garbage in fiscal year 2011, the fourth highest amount among 23 Nebraska landfills, according to the state Department of Environmental Quality.

He estimates that 40,000 of the 128,000 people living in Cedar Rapids have curbside recycling collection. "The rest who either live in mobile homes or in apartment complexes that aren't served by city trucks need to find a recycling center and bring recyclables to the site, which makes recycling a hassle," he said.

In rural areas, curbside recycling is even more rare. Communities contributing to the state's second largest landfill, in Mills County, have no curbside program recycling. So unless a deal is struck with a private hauler, small communities must transport recyclables to the Council Bluffs recycling facility.

Robert Glebs, CEO of Iowa Waste Systems, which manages the Mills and Montgomery waste facilities, said the company has a hard time getting smaller municipalities interested in recycling.

"Like anything else, you can get the 80th percentile to address it, but when you get down to the smaller percentiles … recycling is just not economic," Glebs said.

Another hassle is that many customers have to pre-sort paper, glass and plastic materials. In Davenport, Scott Area Landfill officials are considering switching to single-stream recycling, in which items are sorted by facility operators, to increase participation.

Although the DNR tracks exactly how many tons are dumped in Iowa landfills every fiscal year, it does not determine how many recyclable materials are dumped. So, while some data exists at the county level about curbside collection, no specific statewide data exists for recycling tonnage.

Additionally, waste comes from public and private haulers in loads that aren't easily separated. So even for landfill officials, it is hard to know exactly what is within the tons being dumped into their landfills.

"I have no idea what gets recycled and what doesn't," said Menning, at the Metro Waste Authority. "Once waste gets mixed, it is very hard to break it apart and see what you've got."

With double the tons landfilled of the closest competitor in Mills County, Metro Waste Authority's executive director, Tom Hadden, considers planners for Metro Waste to be lucky. "We have plenty of room for expansion. Others do not," Hadden said.

Metro Waste has purchased enough land to cover needs for the next 100 years.

Other landfills face rising land and garbage costs, or even needing to resort to trucking garbage to another state with cheaper landfill rates.

Some of that already is happening. Nearly 81,000 tons of Iowa's garbage was trucked out of the state last fiscal year, but other states sent Iowa more than three times the waste that Iowa sent out.

Brian Tormey, chief of the DNR's Land Quality Bureau before retiring at the end of 2012, called this "a fundamental fault with the system."

Last year, the Mills County landfill gave $500,000 in tonnage fees to the state DNR -- money that does not necessarily come directly back to the landfill. Mills County's fees, instead, were sent to fund Council Bluff's recycling center.

Glebs said the landfill luckily is able to manage recycling programs with the support of its own collection fees. But seeing some of that DNR money come back would help with expansion and improvement.

Additionally, waste reduction goals grant landfills the chance to decrease the amount they pay to the DNR based on whether or not they meet reduction goals.

A state mandate in 1988 set a 25 percent waste diversion goal for Iowa landfills by 1993 and a 50 percent goal by 2000. Incentives for landfills include reducing their tonnage fees if they meet these goals. The data are collected every five years. They are based on state landfill tonnages that are adjusted for population and economic factors.

Most Iowa landfills have managed to divert 25 percent of their waste compared to original 1988 levels, state reports show. However, progress has stalled, with the state average only reaching 35 percent diversion.

Jennifer Fencl, environmental services director at the East Central Iowa Council of Government Solid Waste Planning Agency, said the six landfills that agency manages hit an average peak diversion of 40 percent in 2000. Since then, though, that percentage has tapered off. Eleven years later, diversion had fallen to just 33 percent.

The large majority of Iowa landfills have struggled to reach the state's second diversion goal, although Mills County is an exception. Thirteen years after the 50 percent diversion goal was supposed to be met, Mills County Landfill is managing to divert a little more than 75 percent of its waste, according to recent DNR reports for the last fiscal year.

Landfill operators credit this to the high volume of industrial waste it receives and is able to reuse for its daily operations. Automotive fluff from a nearby car shredding plant, foundry sand and contaminated soil from an EPA project in Omaha are all used as daily cover — a six-inch layer of material added to the top of waste piles each day.

Tormey called the baseline of this 25-year-old program questionable because of other factors that affect the baseline. "I really think we have got to look at providing incentives," Tormey said.

He used Minnesota's recycling system as a model for his incentives proposal. There, a solid waste management tax is applied to garbage fees of residents and businesses. Since 1997, though, no tax is charged for recycling waste.

One landfill that is not receiving any cuts on its tonnage surcharge is the Northwest Iowa Solid Waste Agency and Recycling, near Sheldon. Larry Oldenkamp, the landfill's manager of three years, said it is not reaching the 25 percent diversion goal.

Oldenkamp said progress is hard to gauge, but the main problem is the lack of recycling from businesses, which produce about two-thirds the state's solid waste.

"We're kinda' stuck in a rut right now," he said. "We're hoping to see that change in the next couple years."

Some of Iowa's largest waste agencies have started to do away with the 25 percent diversion goal. Metro Waste is one of them.

With this program, Iowa landfills record efforts being made in each focus area, set goals and objectives, and try to meet them. Yearly reports are made to the DNR and waste agencies that achieve the EMS goals receive a tonnage fee reduction of 85 cents per ton.

Hadden, of Metro Waste Authority, said the 25 percent diversion program did not take into account several services that help protect the environment. The Environmental Management System gives landfills credit for all of their environmental efforts.

Although Metro Waste was consistently above the 25 percent diversion, Hadden is optimistic about this new program. "All of our different operations are empowered to ask -- how do we do things better?"

This story was produced by the Iowa Center for Public Affairs Journalism, an independent, nonprofit and nonpartisan news service founded by Stephen J. Berry, a Pulitzer-prize winning investigative journalist and an associate professor of journalism at The University of Iowa. Learn more at iowawatch.org.

IOWA CITY, Iowa | A promising new program may be key to pushing Iowa's landfills into action that decreases the environmental impact of all th…

Missouri company steps up to recycle glass in Sioux City

A Kansas City, Mo., firm is interested in taking over glass recycling for Sioux City.

The Iowa Department of Natural Resources has sued a Northwest Iowa landfill agency for alleged dumping and environmental violations.

Jake Bemis has a lot on his plate after he graduates college.

IOWA CITY | An influential group of Iowans may have a significant impact on who the next U.S. president is with, at least when compared to wha…

From Lyon to Osceola counties, south into O’Brien County you go. You skip quickly through Cherokee County, where only 53 percent of the voters supported John McCain in 2008, and start circling back to Plymouth County and, finally, Sioux County.

Equipment moves trash at the Scott Area Landfill near Daveport, Iowa, in December. In some Iowa garbage facilities, more than 75 percent of what's put in could have been recycled.

Doug Mallette, of Gill Hauling, sorts through items brought to the Sioux City Citizen Convenience Center in November. Nearly 81,000 tons of Iowa's garbage was trucked out of the state last fiscal year.