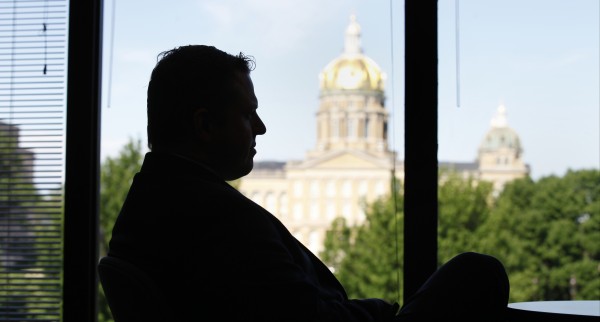 Iowa Department of Education Director Jason Glass is shown Tuesday in his Des Moines office. After a successful 2 1/2-year push to get education reform through the Iowa Legislature, Glass leaves Friday for a school superintendent job in Colorado. 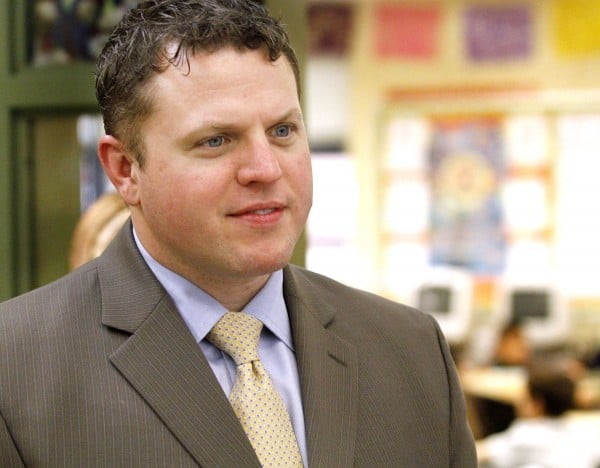 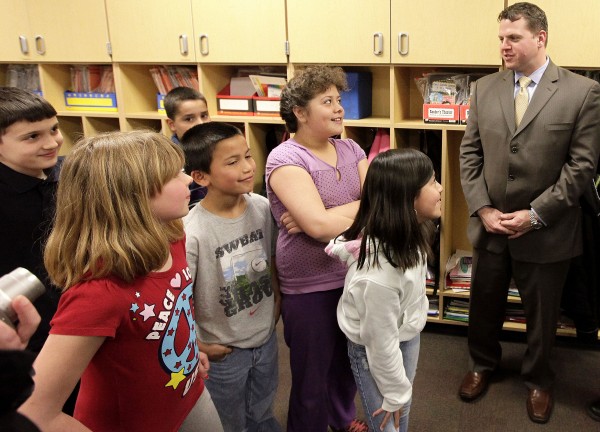 DES MOINES | Everything was working out exactly as Gov. Terry Branstad’s team had predicted.

At the beginning of the 2013 legislative session, the governor’s office pitched an education reform proposal that left Democrats and Republicans wanting, according to outgoing Department of Education Director Jason Glass.

Republicans would want tougher accountability measures for teachers and school districts, and Democrats would want more money for programs. By the time it was all said and done, legislators would have something similar to what the governor originally offered.

But by the time the bill got to conference committee, House Republicans had thrown him — and the governor’s staff — a huge curve.

“The miscalculation that I think we all made is, we underestimated how much Speaker (Kraig) Paulsen and the House Republicans, their interest in the home-school components versus the accountability components,” Glass said. “Turns out they were really interested in moving those home-school elements; they were not as interested in moving those accountability elements.”

It was yet another lesson in politics for Glass, who during his 2 1/2 years as the state’s education director helped shepherd Branstad’s education reform agenda through the Legislature by reaching out to and recruiting those who seldom ventured into Des Moines.

Now, as he prepares to leave Iowa’s capital city for a job in the school district where he first made a national reputation for himself, Glass considered what he’s leaving behind.

The legacy of the education reform law — which changes the way thousands of teachers are paid, evaluated and promoted, ushers in new tests for Iowa’s schoolchildren and gives wider deference to those who choose to home school — belongs to Branstad.

But Glass also leaves a legacy. It’s how an appointed department head — a registered Democrat — combined social media with old-school stump speeches for any Kiwanis Club, Rotary or PTO that would have him to build political pressure for a Republican governor’s legacy project.

“I was brought here to bring the rain,” Glass says, twiddling his fingers like they were raindrops.

Glass was unique among the state’s appointed officials by the way he embraced social media, particularly the micro-blogging site Twitter.

He’s one of the most prolific tweeters in state government, surpassing even elected officials, including his boss, Terry Branstad, in the number of tweets he’s pushed out and the number of followers he has.

It was, Glass said, a calculated effort on his part to try out, and get support for, the governor’s policy.

“Coming here, I didn’t have the relationships with the legislators to fall back on, so I made it a point to reach out to people who did," he says. "These are people who are deeply interested in the discussions we were having, and they could reach out to their elected officials, so it was about building grassroots.”

His openness sometimes brought political heat, such as when he and fundraiser Nick Ryan of the American Future Fund sparred over the topic of public versus private schools for two hours on Twitter during Glass’ third month on the job.

Other times it turned into a chance to push the education reform agenda in a new way, such as when he accepted a challenge from McLeod — a critic of too much standardized testing — to take the ACT. Glass got an above-average 27; McLeod, a near-perfect 34.

“The only regret is I was sitting across from Scott, who is a genius,” Glass says now.

He says he learned from those first days to be more judicious in responding to critics.

“I think, at first, I took it more personally than I should have,” he says. “I got better at it.”

In the end, the openness paid dividends for him — and by extension, the governor — from people who had every reason to be skeptical of the state’s education reform plans.

“I always knew I could pick up the phone and get him,” said Mary Jane Cobb, executive director with the Iowa State Education Association. “We frequently had a seat at the table, which hasn’t always been the case in the past.”

Or, as McLeod wrote on his blog “Dangerously Irrelevant” the night Glass announced he would be leaving Iowa: “He has tried to help us learn from high-achieving school systems and he’s facilitated the expansion of online learning. He fostered the #iaedfuture Twitter hashtag (which has become an important channel for conversations about Iowa school policy) and has been exceptionally accessible to the larger public via his blog and Twitter,” McLeod wrote. “So I’m going to miss you, Jason. Thanks for taking the ACT with me. Thanks for the public Twitter exchanges that everyone saw and the private email exchanges that everyone didn’t.”

That Iowa’s sweeping education reform bill passed out of the Legislature the same May night a school board in Colorado named Glass as its new superintendent was nothing short of serendipitous.

The 41-year-old is returning to Eagle County, Colo., which is where he first made a reputation for himself as a human resources director who smoothed out opposition to the district’s pay-for-performance teacher compensation plan in the late 2000s. That negotiation brought him national attention, a consultant job in Ohio and then a call from Branstad in late 2010, asking him to help develop, and sell, education reform in the state.

Even then, Glass knew it wasn’t a long-term gig. Over a cup of coffee in the basement of the Capitol building in February 2011, Glass confided his job was to be the “lightning rod” for the governor’s agenda: Push the plan, take the heat and get out before he wore out his welcome.

If he’s a rainmaker, Glass says, Iowa now needs a playmaker. That’s someone who will move the policy for the next several years.

For Glass, who leaves Iowa on Friday, his family bigger by two (daughter Norah is 1 1/2 years old; son Chase is 3 months) from when he arrived 30 months ago, it seems to have worked out just so.

“You couldn’t have planned it like that, for some conspiracy theorists to think you’d have the ability to orchestrate all that would just be crazy,” he said. “It would.”

Jason Glass, in his own words:

"I feel very fortunate to accept this position in a state where education has been, and continues to be, a priority.”

“I came out of nowhere; I'm the black sheep. So I have some things to prove here."

“Districts end up using seniority as a determining factor instead of using student need. We need to press on this issue."

"To reach the goals of what we're trying to accomplish, it will take investment. New dollars are necessary; we can't just repurpose existing funds."

“I’m very proud of Iowa tonight. It was a difficult couple of years and I’m proud of the work we did.”

* Taught high school and at university levels in Kentucky.

* Worked for Colorado Department of Education.

* Senior director for human capital strategy at Battelle for Kids in Columbus, Ohio.

“It took a few iterations to get to that point. We floated a lot of trial balloons, had a lot of discussions, ran some legislative proposals that didn’t make it, but we learned a lot, and every time we had a failure, we adapted until we got to a package that went through, and it took us two years to do that.”

“The governor is very supportive of the State Fair and, to a degree, to the tourism interests in the state, and it’s my responsibility to look after the educational interests in the state, so we have kind of a conflict over this. I’m not sure how that’s going to play out. On the balance, we know that alternate calendars tend to help kids that come from impoverished backgrounds. That evidence is pretty strong.”

GETTING IN LINE WITH THE BOSS

“In the legislative package from two years ago, the third-grade retention element, I was never particularly comfortable with that. I was much more comfortable with the reading supports written into the law. I think kids come hard-wired wanting to learn to read. That was a priority for the governor that I got in line on.”

“One of the things that surprised me was the incredible amount of energy and time that it takes to change a state system. We studied other states, we studied other nations that made dramatic improvements in their education systems, and all of them said it takes 10 to 20 years. For most people when you say that, they act like that’s so long, and we have to be able to do it faster. Now I get it. I was surprised that fact is absolutely true. I mean, we worked two years just to get the architecture right.”

THE MOST TROUBLING PART OF MAKING CHANGE

An Iowa schools job bank has gone live with more than 775 education openings ranging from teacher’s aide to superintendent.

The superintendent of a rural Polk County school district has been named the next Iowa Department of Education director.

Rural school districts struggle to get access to STEM teachers and programs compared with their counterparts, according to highlights of a report being released later this week.

For homeschool advocates, rollbacks on homeschool regulation in Gov. Terry Branstad’s 2013 education reform bill were a resounding victory that made Iowa a model for the nation.

What area of Iowa has the most homeschooled students?

Mid-Prairie Community School District looks like any of the dozens of rural school districts in Iowa.

Iowa Department of Education Director Jason Glass said the push by Gov. Terry Branstad to set a two-year budget will give school districts more predictability as they determine how to use state funds.

Iowa lawmakers approved a sweeping reform package Wednesday which changes the way thousands of teachers across the state will be paid, promoted and evaluated.

Iowa Department of Education Director Jason Glass is shown Tuesday in his Des Moines office. After a successful 2 1/2-year push to get education reform through the Iowa Legislature, Glass leaves Friday for a school superintendent job in Colorado.