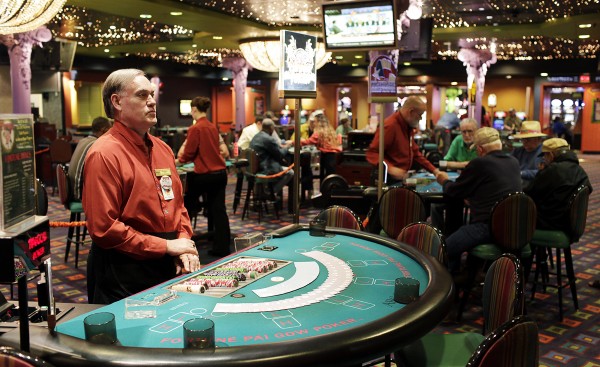 Customers gamble at the Argosy riverboat in Sioux City. 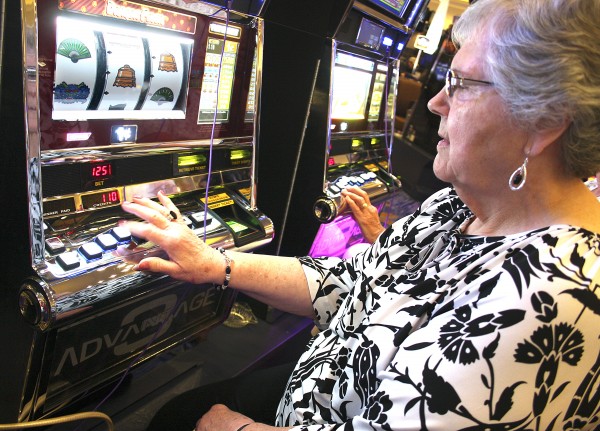 Margaret Keffeler gambles at Grand Falls Casino Resort near Larchwood, Iowa, in July 2011. Iowa racetrack and riverboat casinos had a slight slowdown in wagering in fiscal 2013, according to a new report.

DES MOINES - Proponents seeking to rein in the unregulated "wild, wild West" environment of illegal online poker in Iowa are girding for another legislative battle this year.

Meanwhile, critics worry about a new post-Touch Play gaming expansion that could spread addictive forms of electronic gambling from casinos to living rooms.

Iowans on both sides of the gambling issue say last year's federal crackdown on major illegal offshore poker operations and a separate Justice Department opinion that narrowed prohibitions for forms of Internet gambling to primarily sports betting have increased the pressure on Iowa lawmakers to set regulatory perimeters for state-licensed casinos to offer legalized digital poker to adult players.

"It was a real surprise when (the U.S. Department of Justice) reversed what's been a long-standing precedent on that, which I think potentially throws the door for Iowa not only to be one of the early states into the arena but even to go beyond their borders," said Tom Coates, an official with Consumer Credit of Des Moines who has been a leading gambling opponent in Iowa. "I was not worried before, but I am more worried now that it might go and that it will be a viable model and you will damage an increasing number of players and young players."

State regulators who studied the issue last fall were able to verify that illegal online poker is going on in Iowa, but they could not corroborate gambling industry estimates of 150,000 players. The Iowa Racing & Gaming Commission study also projected that legal online poker operations - if authorized - could generate between $13 million and $60 million in yearly activity which could produce an estimated $3 million to $13 million in tax revenue annually.

For now, that money and the jobs and economic opportunities that go with it are leaving Iowa, say lawmakers like Sen. Jeff Danielson, D-Waterloo. He plans to offer legislation as early as next month that would authorize the commission to establish a framework for hub operators and state-licensed casinos to provide online poker to Iowans via an intrastate network or join multi-state partnerships to attract more players and bigger wagering pots.

"Over the last year or so we've had a tremendous change in the dynamics around online poker and I believe it's the responsibility for us to have a thoughtful, responsible gaming policy when it comes to online poker," said Danielson. "The challenge for us is right now we have a do-nothing policy by default.

"I don't believe do nothing is the appropriate answer," he added. "To do nothing means it is the wild, wild West and no ability to account for the costs if you're not thoughtfully engaged in what policy you have."

However, critics say Internet poker will be the gateway to other forms on online gambling in a state that has shown a lack of restraint since pari-mutuel wagering, the state lottery and riverboat gambling were legalized.

"Everybody can see the handwriting on the wall, we're moving toward legalization of online gambling," said Rep. Jeff Kaufmann, R-Wilton, a gambling opponent who attended a House State Government Committee meeting last week where state gaming officials conceded that the advent of online poker might mean more people will gamble or those who currently play will play more. State regulators also said software exists to combat cheating and underage gambling but the technology is not 100 percent foolproof.

Coates said the argument to legalize something because it goes on anyway unregulated is "the rationalization and the mantra of the scoundrel," while Kaufmann argued that adding another form of legalized gambling will mean an increase in the social and financial problems associated with gambling.

"I don't buy the arguments that it's happening anyway, so let's legalize it," Kaufmann said. "I've heard that same argument on the legalization of marijuana; I've heard that same argument on a whole host of vices. If the premise for legalizing online gambling is that it's happening anyway, there is a huge slippery slope on what we're going to legalize in this state and I know we would go places where the vast bulk of Iowans do not want to go."

Danielson said he plans to work off a concept introduced in the Senate last year that authorized the creation of an intrastate online poker network and provided a regulatory structure for its implementation, operation and taxation. The poker hub operator or operators would be under the control of the state Racing and Gaming Commission that would contract with state-licensed casinos to operate affiliated online sites within a "closed loop" in Iowa for registered players ages 21 and older.

"You will not be able to play online poker in Iowa should this become law unless you sign up with your local casino," Danielson said. "We want to make sure the trusted professionals in our own communities who have all sorts of accountability and have to be responsive to their local voters - we want to make sure that they're the gateway to the online poker."

The Waterloo Democrat said the focus is only on Iowa's safe and secure regulation of online poker, which he differentiated as a game of skill that is apart from other forms of gambling. "This isn't a free-for-all. People need to know that. I'm focused only on poker," he said. "We will close every loophole, including the lottery's ability to do online poker if we have to. We will close every loophole so that the policy is crystal clear and air tight."

Danielson said he also would be willing to sequester the revenue the state gains from online poker for a time so people understand it's not about making money for government.

Wes Ehrecke of the Iowa Gaming Association, an umbrella group that represents 18 state-regulated casinos, said the American Gaming Association and members of his Iowa group prefer passage of a federal law to address online gaming from a national perspective. Absent that, however, the Iowa industry generally favors a plan to allow Internet poker "on the casinos' platform," regulated by the state Racing and Gaming Commission and with reciprocity to enter into partnerships with Nevada, the District of Columbia and other states that legalize the games.

"What we're trying to do is take something that's being played illegal from all these entities that are based offshore and to be able to give people the same level of integrity and assurances, standards and regulations that they have with every other game that we currently offer," he said. "We want to tread slowly and evolve cautiously along the way to make sure that this makes sense."

Rep. Peter Cownie, R-West Des Moines, chairman of the House State Government Committee, said he was unsure how an online poker bill might fare in the House if it manages to garner the necessary 26 votes for Senate passage this session.

"I think most people are like me, they feel like they don't want to expand gambling in Iowa," he said. "I think that justification has to be made first.

The Iowa Lottery has no plans to get into online gaming this year, but at least one lawmaker thinks it might be in Iowans’ best interest to offer online poker.

Customers gamble at the Argosy riverboat in Sioux City.

Margaret Keffeler gambles at Grand Falls Casino Resort near Larchwood, Iowa, in July 2011. Iowa racetrack and riverboat casinos had a slight slowdown in wagering in fiscal 2013, according to a new report.