Political scientists over the years have observed that most Nebraska governors tend to be management stewards rather than policy innovators. Of late, the Ricketts administration has made troubling mistakes on the basics of government management. Two examples loom large.

A new state auditor report says the State Department of Administrative Services made some $21 billion in accounting errors while processing funds last year. None of those dollars involved fraud or embezzlement; the errors were in documentation and in assigning funds incorrectly in their accounting designation. That might seem arcane, but if a private company made accounting mistakes similar in scale to the company’s finances, it would be considered a glaring failure and a worrisome problem.

The State Department of Health and Human Services has signed a 25-month, $147.3 million emergency contract with St. Francis Ministries after the contractor was in danger of running out of money to handle child welfare services for Douglas and Sarpy Counties. The problem stems from the Ricketts administration’s acceptance in 2019 of St. Francis’s strangely low bid that was 40% less than what the state had been paying. The situation shows that sometimes a bit of common sense ought to be heeded: “If it sounds too good to be true, it probably is.” Now the administration has had to apologize for its handling of the matter, St. Francis continues to fail to meet the caseload limit for frontline workers and the Legislature is rightly set to conduct an investigation into the entire matter.

No question, managing state government is a challenging endeavor, whether in a small state or a big one. But that in no way exempts an administration and its departments from their duty to exercise professional competence and judgment. Early in Gov. Pete Ricketts’ tenure, his administration implemented various efficiency initiatives. That was commendable. But the large-scale accounting problems and the St. Francis situation have tarnished the administration’s reputation greatly on the management front.

On the accounting issue, the state DAS notes that the federal government poured more than $900 million in COVID-related relief into state coffers last year, and 40% of DAS employees working on the department’s financial report were doing so for the first time. Nonetheless, the fact remains that sound financial management is one of the basic obligations of state government. Accounting, after all, is famous for its rigorous reliance on standards — universally adopted financial procedures to ensure professionally managed accounts.

Craig Kubicek, the assistant deputy auditor, correctly summed up the concern when he stated that “when the state doesn’t get a clean audit opinion, it’s a big deal.”

DAS says it’s taking various steps to address the problems. The department must follow up vigorously. A clean audit next year is imperative, to provide proper reassurance to the public.

As for the child welfare situation, the Legislature is fully justified to thoroughly investigate the St. Francis case and the state’s bid process overall. How the administration could OK a contract that stood out for such dramatic underbidding continues to raise major concern. A legislative investigation can serve the public interest well by shining bright sunlight on how Nebraska state government decides such multimillion-dollar bids.

OTHER VOICES: Changes to Iowa’s bottle bill would hurt consumers

A bill significantly changing Iowa’s 40-plus-year-old bottle and can deposit law is on the move in the Iowa Legislature. And in its current fo…

OUR OPINION: Iowa lawmakers should focus on more pressing issues

There comes a time in every session when we realize legislators should have gone home a lot sooner.

Don’t blame failing wind energy for the rolling blackouts that shut off the power for thousands during last week’s cold snap. Don’t point the …

OTHER VOICES: For vaccines, prioritize those with serious medical needs

As vaccinations for those 65 and older continue across Nebraska, the state has changed its priorities for Phase 1B of the vaccination protocol…

For some reason Skyler Wheeler thinks he knows what Quad-City kids should be taught.

OTHER VOICES: Nebraska officials should move slowly, carefully in overseeing the casinos

Last fall, Nebraskans overwhelmingly approved casino legalization. Now the state is taking its first steps to lay the groundwork. At this earl…

OTHER VOICES: GM's move to an all-electric lineup could be a global-warming game changer.

In an ambitious and historic announcement, General Motors last month said it will stop making gasoline-powered passenger cars by 2035 and offe…

Nebraska Gov. Pete Ricketts speaks in support of LR22CA during a Revenue Committee hearing on Wednesday, Jan. 27, 2021, at the Capitol in Lincoln, Neb. (Gwyneth Roberts/Lincoln Journal Star via AP) 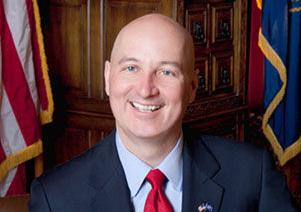