That's our question in the wake of the city's decision to revisit the pit bull ban passed in 2008, then upheld in 2010. Last week, City Council members on a 4-to-1 vote (the lone vote of opposition was cast by Pete Groetken) passed on first reading an ordinance to repeal the ban. A second reading is planned for Monday.

In our view, no good reason exists to reopen this divisive debate. We sense no tsunami of opposition within our community to the ban, which appears to have worked the way it was intended.

As for concern about compliance with the federal Americans with Disabilities Act and Fair Housing Act for individuals who own a pit bull service animal, can't the city make an exception to the ban for a case in which an individual provides proper service animal documentation? We question whether it's necessary to throw the door wide open to ownership for everyone.

Rather than prevent them, a repeal of the ban may create legal problems for the city.

"If I'm going to err, I'm going to err on the side of safety and welfare for people -- adults, children, alike," Groetken said at last Monday's council meeting. "My concern, being a police officer, was the exposure of the city to any potential liability issues. I want to reduce those and I want it to be safe for everybody. There's no guarantees. I'll be heartbroken if the ban goes away and something serious happens in a week."

Between 2008 and 2010, the City Council studied, talked and argued about pit bulls, and vicious animals in general, ad nauseam, listening to both sides. Countless hours at God-knows-how-many meetings were dedicated to the pit bull ban and a vicious-animal ordinance. On and on ... and on ... and on ... the discussion went. Honestly, we are hard-pressed to think of a local subject over which more time, energy and emotion were expended, within and outside the council.

The matter was, finally, decided and we as a community moved on. Let's not turn back the clock. The City Council should drop the proposed repeal ordinance and leave the ban in place.

Finally, we believe Councilwoman Rhonda Capron should recuse herself from additional votes on rescinding the ban because of a conflict of interest due to the fact she owns a pit bull (because Capron's pit bull was registered in the city before April 25, 2009, she was permitted to keep the animal after passage of the ban).

OUR OPINION: Scott, Capron have earned another term 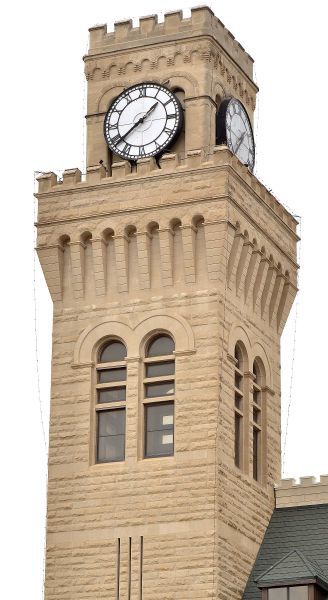 The clock tower of City Hall in downtown Sioux City is pictured.