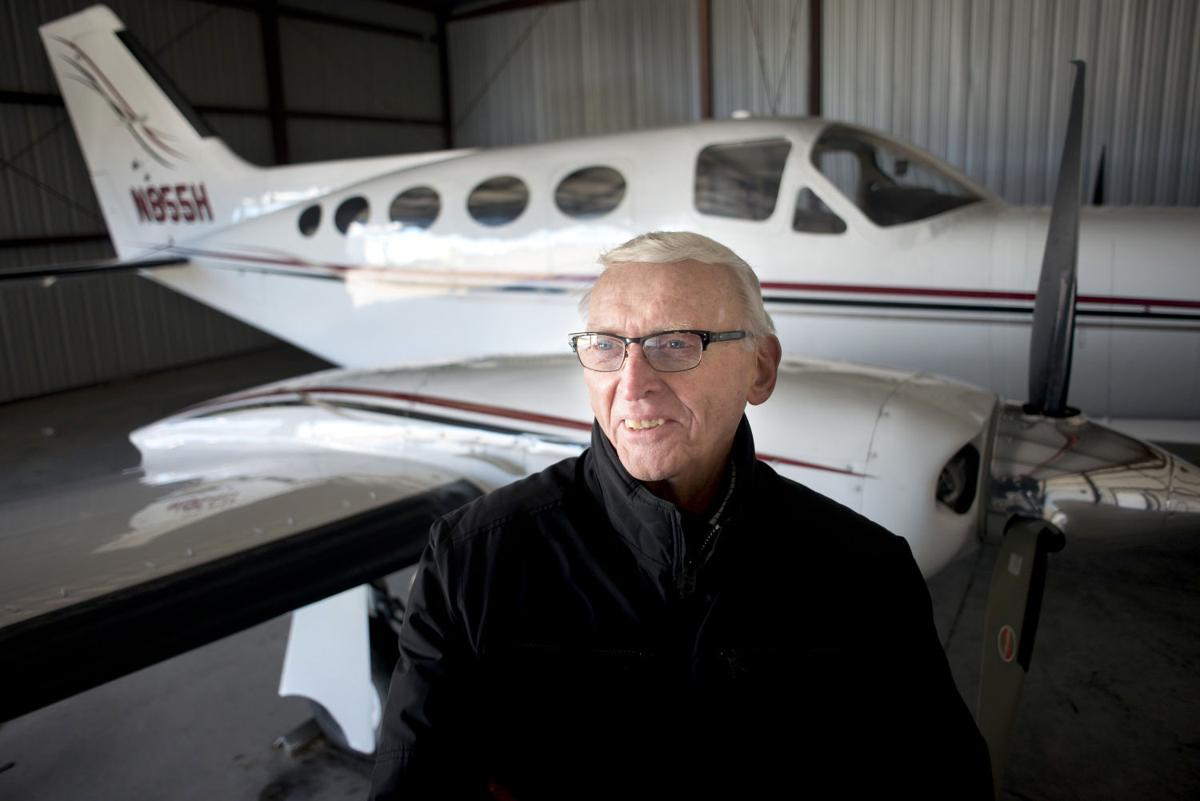 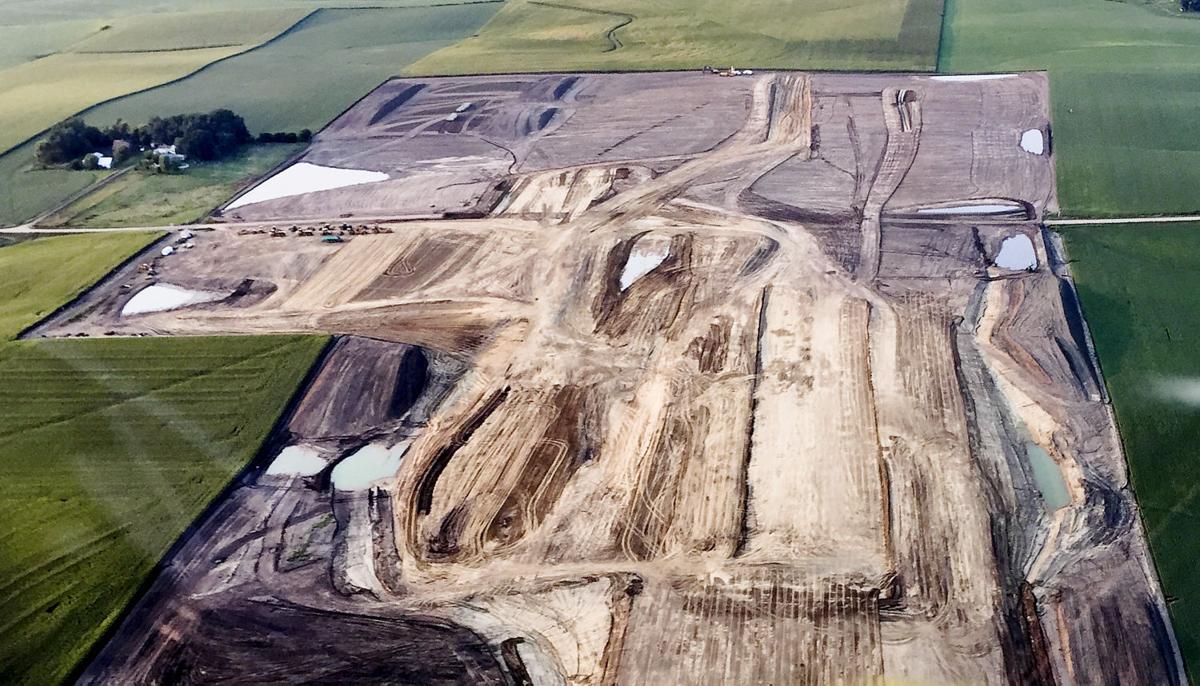 An aerial view of the new Sioux County Airport under construction near Maurice, Iowa, shows progress of grading in November. 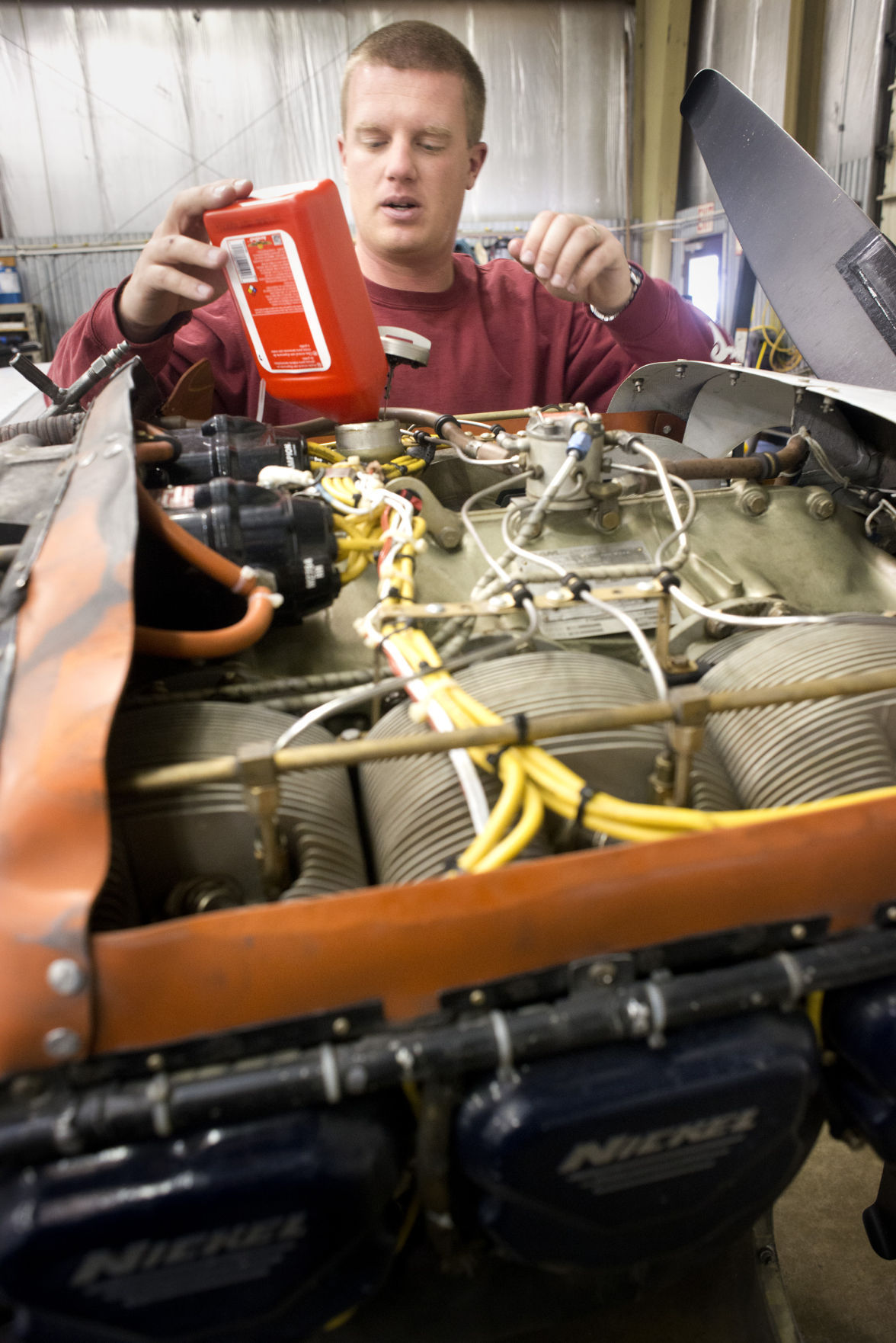 Lane Mars, a pilot and flight instructor with AirFlair, does maintenance work at Sioux Center Municipal Airport in Sioux Center, Iowa, on Nov. 19. The airport and one in Orange City, Iowa, will be replaced by a new, larger facility currently under construction near Maurice, Iowa.

MAURICE, Iowa | Fall rains may have slowed progress on a new Sioux County airport, but it hasn't dampened the dreams of developers who believe that the project can remain on schedule and open in two years.

"We're hoping by the third quarter of 2018 we can fly out of there," said Harold Schiebout, Sioux County Regional Airport Agency Board chairman.

Grading on a portion of the 492-acre site near the intersection of U.S. Highway 75 and Iowa Highway 10 began last summer. Plans called for half the grading to be done by the end of the year, but it was too wet to meet that goal, Schiebout said. Still, all grading at the site should be done by July.

Schiebout said bid-letting for the first half of the concrete paving could take place in May. The second half of the paving is scheduled for 2017. Construction of the terminal, hangars and maintenance building will take place during the next two years.

Once completed in 2018, the $28 million project will replace aging airports in nearby Orange City and Sioux Center that have little room to expand to accommodate larger corporate jets that companies in both cities use for business travel.

After the airport opens, Sioux County leaders hope to see more of those jets, not only from existing businesses, but also from companies considering locating here. Schiebout said last fall that he'd already heard from one business that would be interested in locating in the area once the airport is operating.

"Both communities and the county now will be more attractive to business air services," Schiebout said.

That potential for business growth has been one of the driving forces for a new airport since talks began back in the 1990s. Airports in Orange City and Sioux Center don't have available land to expand runways that are becoming too short and narrow for the size of aircraft using them. In case of wet or wintry weather, the airports' runways are too short to provide the extra distance planes need to land.

"It's usable, but it's constrained. There are times we just don't fly because we can't use the airport," said Mark Vogel, vice president of OEM coatings at Diamond Vogel, an Orange City paint manufacturer that keeps a corporate plane at Orange City's airport.

That's led to cancellation of business meetings, Vogel said, or forcing company representatives, who use the company plane three to five times a week, or visitors to land in Sioux City or Sioux Falls, where someone must then drive to pick them up. The new airport will eliminate those problems, allowing businesses to operate without worrying whether they'll be able to fly into or out of the airport.

Both existing airports are essentially boxed in by surrounding properties and unable to expand. Locating the new airport on land in the open about halfway between the two cities provides room for any future expansion.

"The new facility will have much greater safety features and be able to accommodate all business jets," said Schiebout, who began working on the project in 1999 when he was Sioux Center's city manager. He's now semi-retired, but remains involved.

In 2004, Orange City and Sioux Center partnered with the Sioux County Board of Supervisors to form the Sioux County Regional Airport Agency Board. Each group has two members on the board. Together, both cities and the county also have committed $2 million toward the project. Federal Aviation Administration grants will pay for a majority of the project, with the local funds and some state funding providing the rest.

By working together, the three local entities believe the airport can benefit not just Sioux County, but neighboring counties as well.

Not only will it provide an extra recruiting tool for new business, it will help existing businesses. Ag spraying companies and charter services that use the existing airports will benefit from new facilities and could expand.

"It'll mean that for businesses, even for charter services, we can handle more aircraft more of the time," said Duane Feekes, Orange City city administrator and airport board member.

Once open, Schiebout said the new airport will be able to handle the private planes that Sioux County companies use. It may even attract more. He knows of one Sioux Center business that houses its plane at the airport in Spencer because the Sioux Center runway isn't always available during bad weather. He's expecting that business would want to move its plane to the new airport to cut down on travel.

"We've got businesses in Sioux Center and Orange City that really need this," Schiebout said.

Amid the fertile Sioux County cropland near here, dreams of a bigger, better airport that could lead to greater business opportunities have begun to take root.

MAURICE, Iowa -- Dennis Muilenburg, CEO of The Boeing Company, flew over the farm where he was raised while preparing to land at the new Sioux…

An aerial view of the new Sioux County Airport under construction near Maurice, Iowa, shows progress of grading in November.

Lane Mars, a pilot and flight instructor with AirFlair, does maintenance work at Sioux Center Municipal Airport in Sioux Center, Iowa, on Nov. 19. The airport and one in Orange City, Iowa, will be replaced by a new, larger facility currently under construction near Maurice, Iowa.