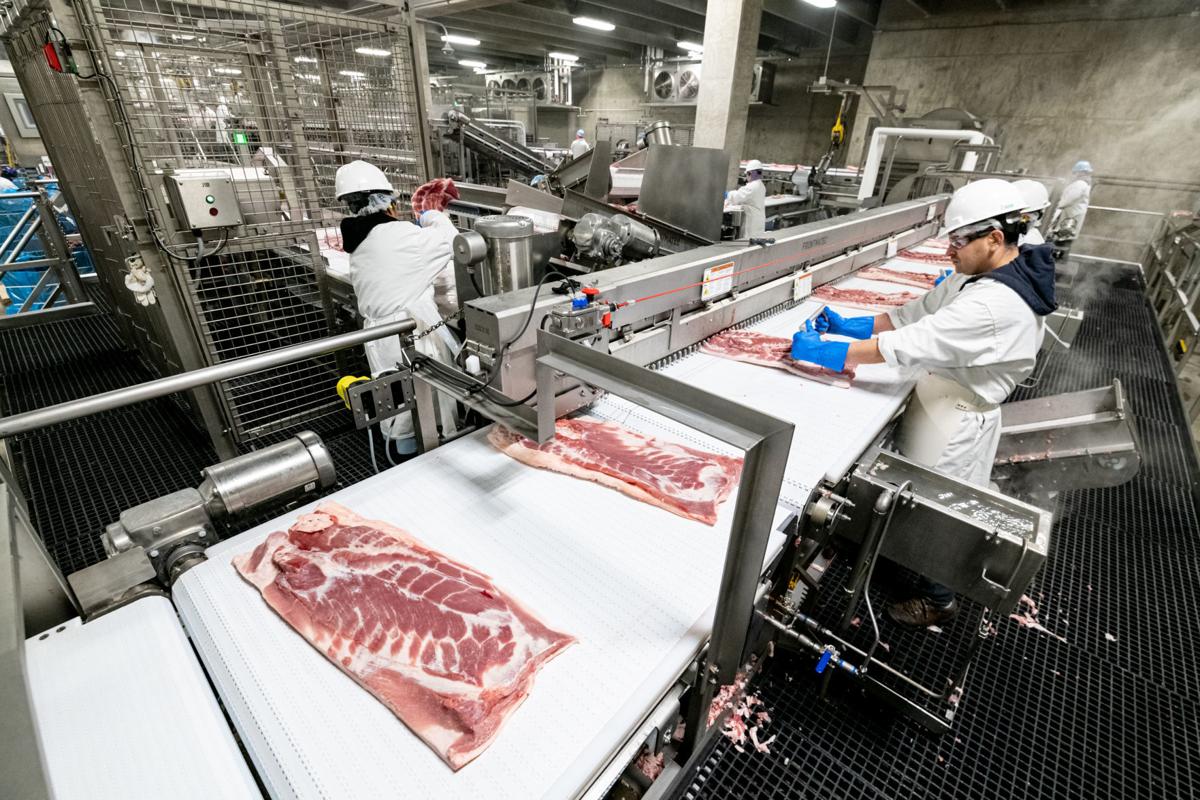 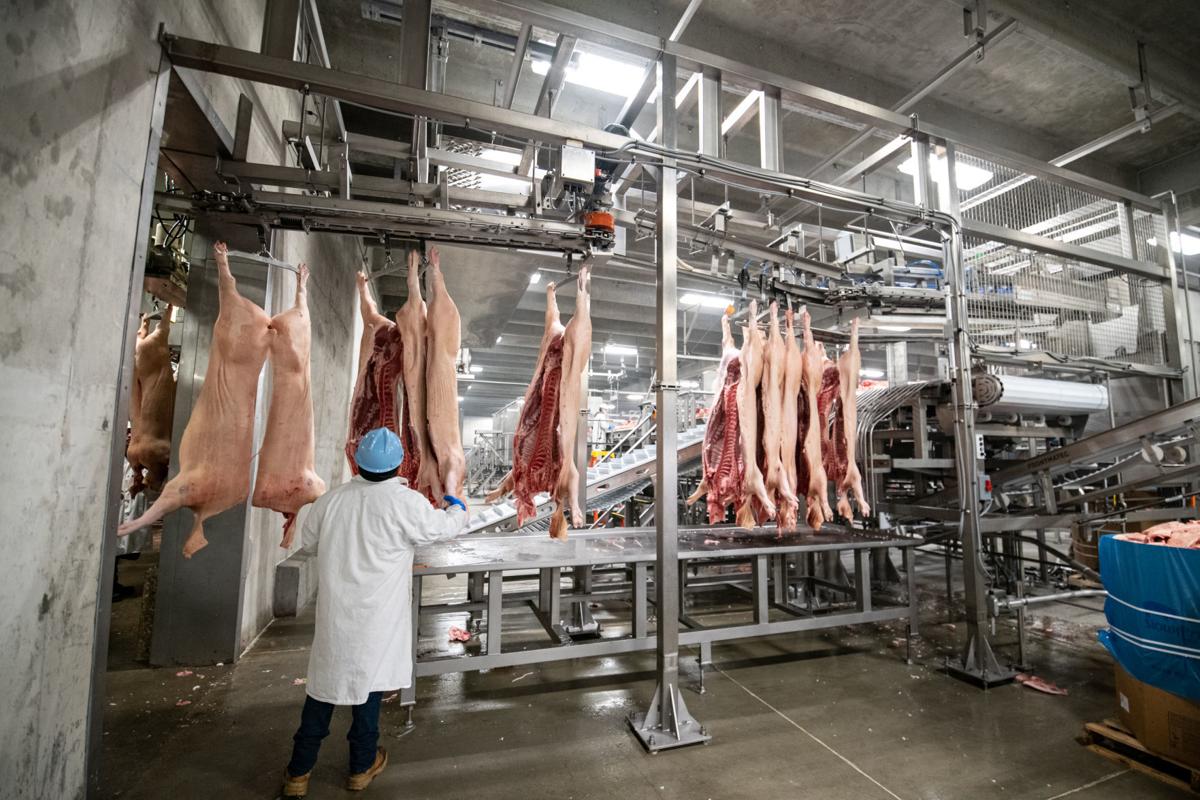 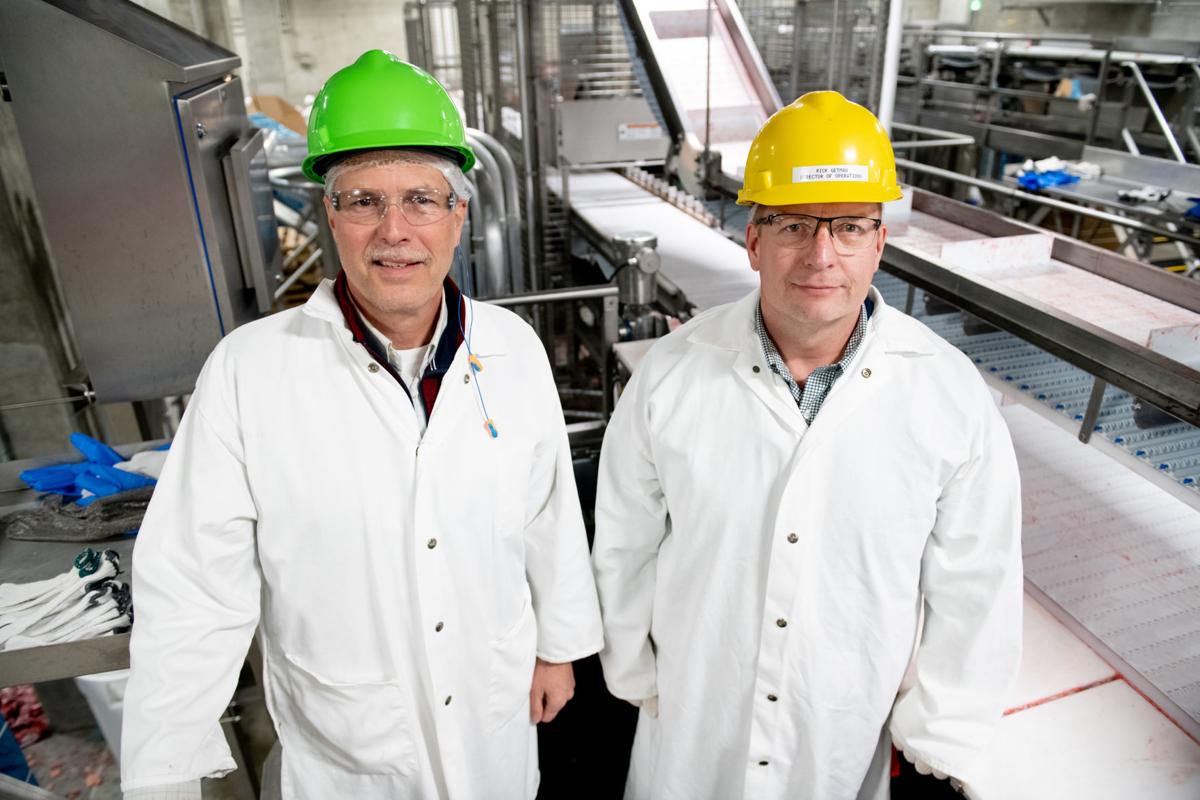 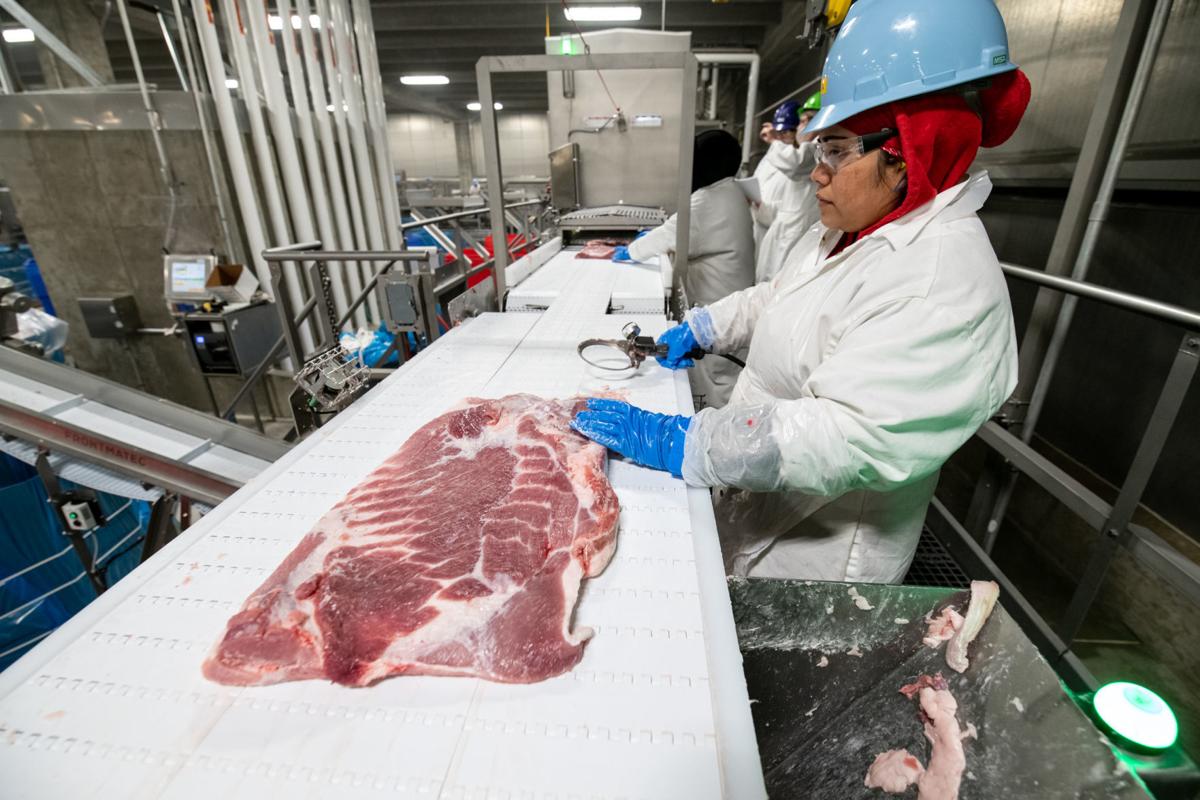 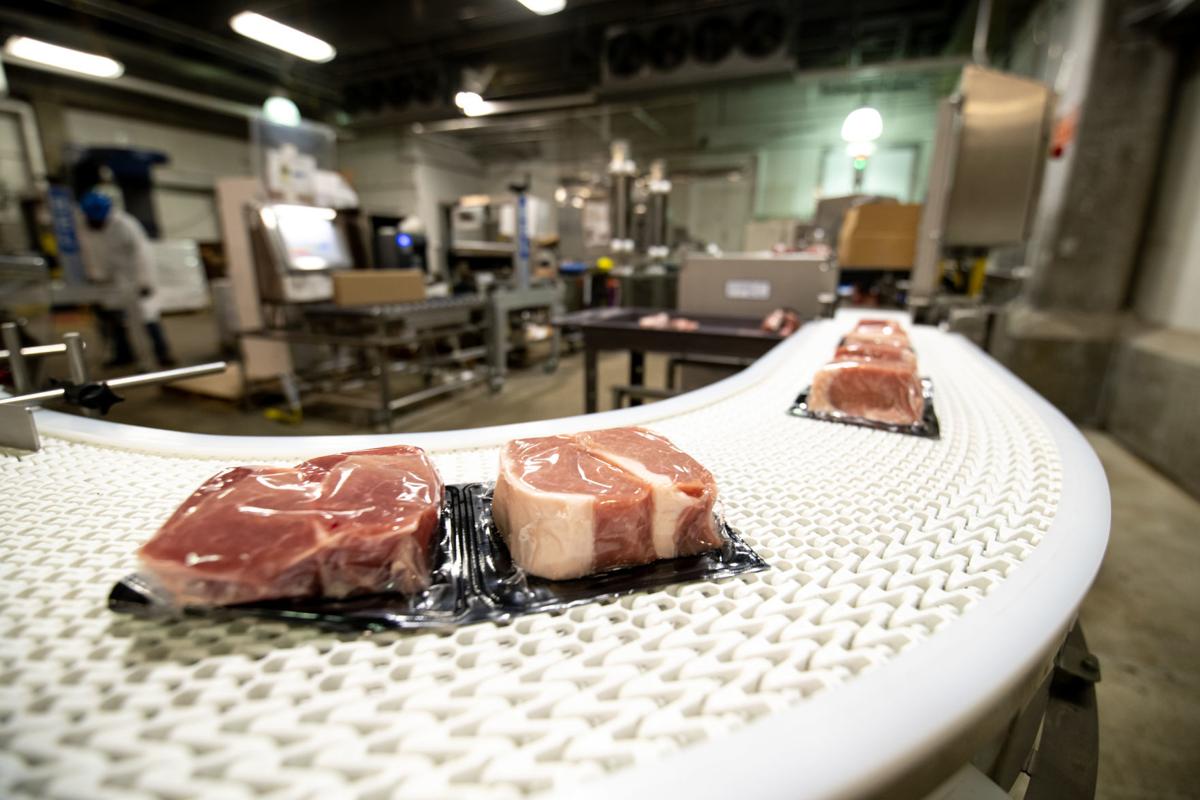 Eight-ounce pork chops are vacuum packed and labeled on a conveyor belt in the new expansion at Perdue Premium Meat Company in Sioux Center, Iowa. 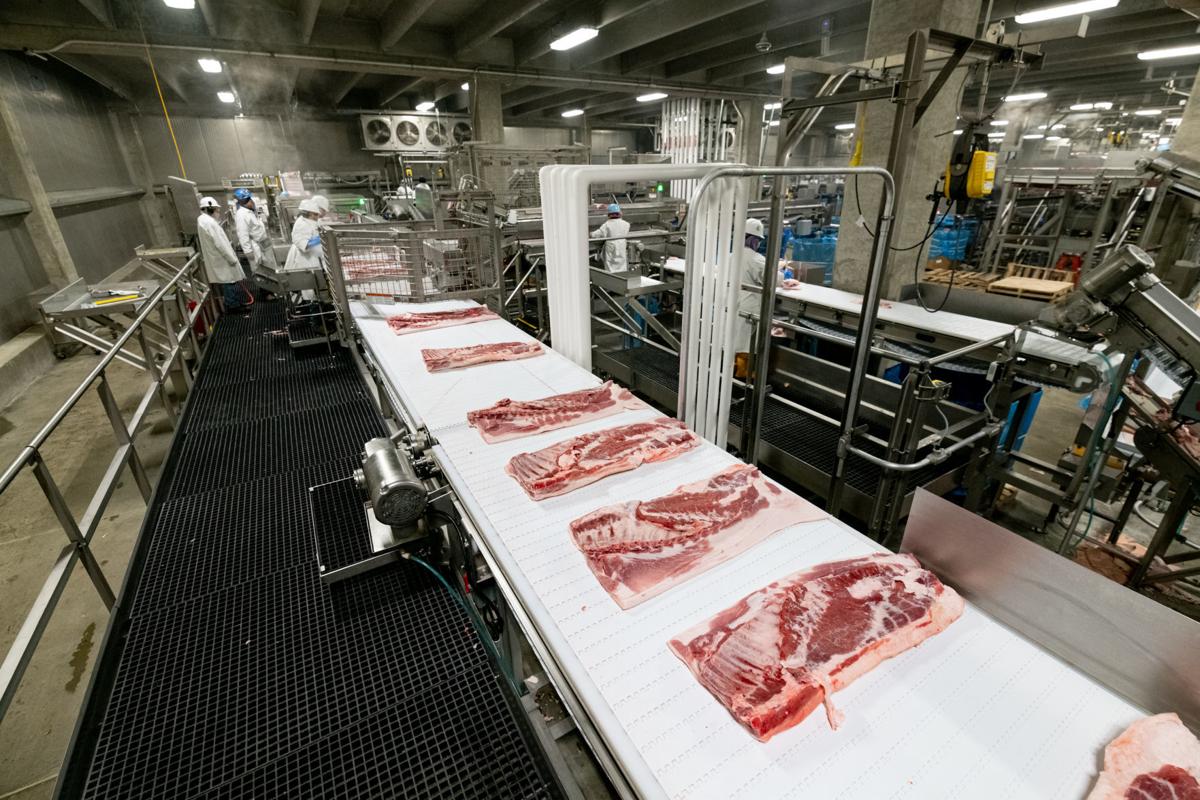 The recently completed expansion of the company's Sioux Center facility puts it in position to process pork faster and in a more humane manner preferred by a growing number of customers.

"There are lots of different customers out there that have a lot of different expectations. We've seen a lot of growth in specialty markets, and that's been our growth model over the years," said Gary Malenke, senior vice president.

Perdue Premium Meat will celebrate its $29 million, 50,000-square-foot addition with a ribbon cutting at a date to be determined. Production began in the state-of-the-art facility in February.

Malenke said workers, many of them new, are still fine-tuning the production process and adjusting to the new equipment.

"We're not up to full speed," Malenke said, adding he hoped that production would increase in coming weeks.

There's a lot to get used to.

First of all, there are more workers. The expansion, begun in January 2019, has added 50 jobs, bringing the number of workers at the Sioux Center location to 240. The addition also has increased the plant's size by 50 percent.

Inside the new plant section is equipment with more safety features that protect workers, making their jobs not only safer, but less physically demanding. Among the improvements is automated cutting equipment that Malenke said makes sure products are "trimmed to perfection" and X-ray technology to detect product quality.

That new equipment allows for faster, more efficient product flow through the plant. New packaging equipment gives the company the ability to provide packaged pork products that are meat case-ready for retailers.

The plant prioritizes humane animal handling, including a live video feed that is monitored by a third party. It has been certified by Certified Humane, an organization that, according to its website, is dedicated to improving the lives of farm animals in food production from birth through slaughter.

The addition is 100 percent wind powered and uses a closed loop waste water system that is filtered and recycled to provide beneficial nutrients for local farm land.

The environmentally friendly operations fit in with the company's many product offerings to consumers who desire organic and antibiotic-free meat, Malenke said.

"It really is aligned largely with our customer base," he said. "We have customers that value it, hence our rationale for doing it."

The plant addition will help the company expand its ability to meet consumer demands. Perdue Premium Meat processes hogs that were raised organically and antibiotic-free as well as animals raised in more traditional means. Malenke said the specialty meats, which mainly pertain to how the animals were raised, have become more popular.

In his 32 years in the industry, it's one of the biggest changes Malenke said he's seen. Consumers are becoming more curious, asking where their food comes from and how it was raised.

"Consumers are more and more inquisitive about what they're eating," he said. "They're more discriminating than just looking for the cheapest pork chop."

The expansion deepens the company's roots in Siouxland.

Sioux-Preme Packing Co. started in 1970 as a supplier to domestic and international customers. It launched its first Iowa facility in 1995 and began processing pork hams, rib, bellies, loins and shoulders, as well as starting antibiotic-free or breed-specific lines. The company was known as Natural Food Holdings from 2006-15 until it was acquired by Perdue Farms in 2015 as part of its acquisition of Natural Food Holdings and its brands. Perdue Premium, which is a subsidiary of Perdue Farms in Salisbury, Maryland, supplies products to upscale restaurants, retail food markets and countries including China, Japan, Mexico and Canada.

In addition to its Sioux Center location, Perdue operates a Sioux City facility that performs boning and packaging of pork shipped from the Sioux Center plant.

The Sioux Preme pork plants in Sioux City and Sioux Center, Iowa, have a new owner.

U.S. 75 expansion in Sioux Center gets on the road to realization

Eight-ounce pork chops are vacuum packed and labeled on a conveyor belt in the new expansion at Perdue Premium Meat Company in Sioux Center, Iowa.