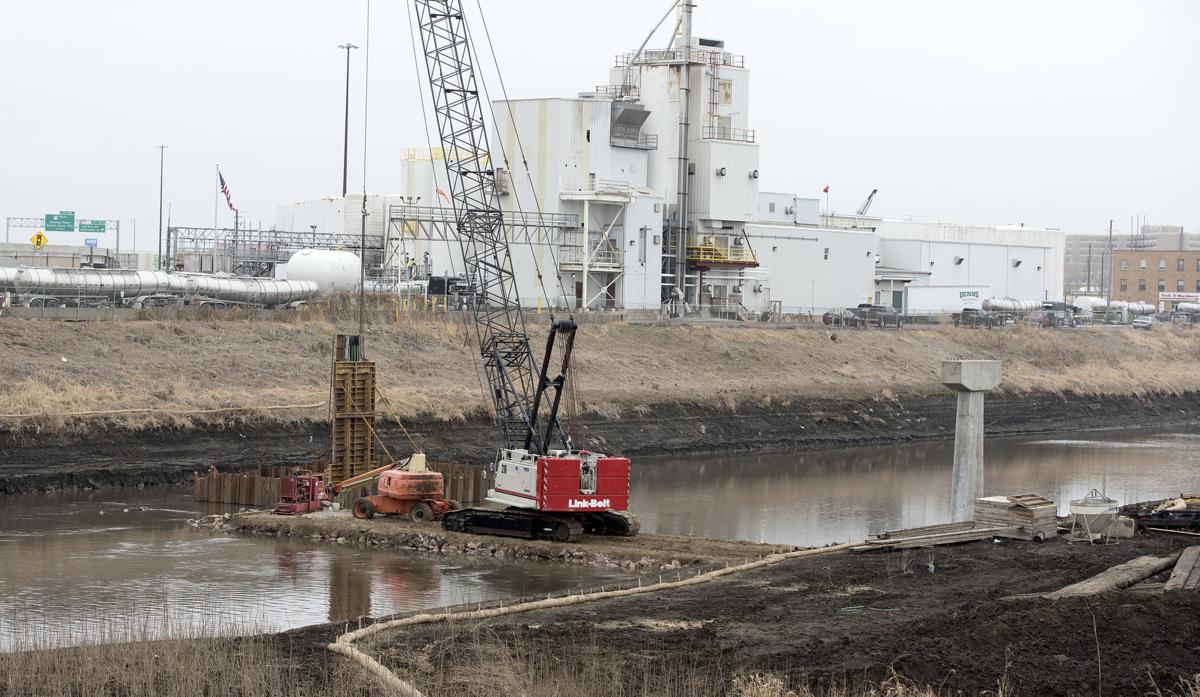 SIOUX CITY -- A long-sought riverfront segment of more than 10 miles to the city's recreation trails system will finally be complete by fall.

"This is literally the most critical trail connection not only for Sioux City, but all of Siouxland," Matt Salvatore, the city's parks and recreation department director, said earlier this month.

Salvatore said he knows people have bemoaned the city having too many short trail pieces that are not linked into longer lengths. Bob DeSmidt, of Sioux City,  a past president of the Siouxland Trails Foundation, has said several residents in 2003 came together and expressed "concerns about the sorry state of our local recreational trail system," which led to the foundation's creation.

DeSmidt said improvements have since followed, and Salvatore said the big jewel for the year will be a 1.5-mile section that makes the riverfront trail a 12-mile continuous segment by finally linking Chautauqua Park on the south to Chris Larson Park and extending farther to the north into the Riverside area.

The section will be done by Sept. 30.

At the previously budgeted cost of $2.6 million, the 1.5-mile segment of the project involves two bridges over the Floyd channel and Floyd River, runs through the former stockyards area and under Interstate 29 to reach Chautauqua Park.

That is adjacent to the big Interstate 29 reconstruction project of 11 years that finished in 2019, which was one delaying factor. Another was getting various permits that are required since several entities provided funding, which reduced the city's direct costs. Additionally, the U.S. Army Corps of Engineers for some time wasn't acting on permits.

"When this trail is completed, bikers, runners and walkers will be able to enjoy over 12 miles of continuous trail along the Missouri and Big Sioux Rivers," Salvatore said.

Once that is completed, plus another half-mile section ahead in 2020 is added, the city will move from 28 miles to 30 combined miles of recreation trails.

Salvatore said a second trail segment will also be added by summer on the city's north side, with a four-tenths-of-a-mile segment leading further north from the end of the Floyd River Trail in an old railroad bed. That piece will be started by June 1 and be finished in 25 working days in a contract worth $171,000.

That segment in the Leeds neighborhood of the city will extend from near Outer Drive and Floyd Boulevard where in July 2018 a railroad bridge, built at a cost of $1.2 million, provided a direct link between the Floyd River and Outer Drive trails.

Rec trails were first built in Sioux City in the early 1990s, with the Floyd River Trail being added about the same time as the Missouri riverfront trail. Overall, Salvatore said, the city's bike system is advancing well.

"It is a major priority for the City Council. We've been fortunate to build six trails in the prior five and a half years, and we have two for this year and one next year," he said. "We are going to do key links to pull everything together."

Salvatore said one other notable recreation piece likely ahead is the quest to build a 1.25-mile trail segment extending north out of the Riverside neighborhood near Iowa Highway 12 and the Sioux City Railroad Museum. That trail is in the design phase, and a construction bid letting is anticipated by September for paving to be done in 2021.

The expansion will include 66 new hotel rooms, a dedicated spot for sports gambling and a new stage for musical entertainment. The casino near Sioux Falls began its sports betting operations last month.

An unknown person enlarged a cross planted by Kent Harfst's brother, attached sunflowers to the top of the memorial and added the words "Kent Harfst" and "RIP" on it. Relatives are healing, Harftst's wife, Becky, said last week, with ups and downs.

ARNOLDS PARK, Iowa -- A prominent segment for recreational fun available in the Okoboji area has been renovated, as Preservation Plaza now has…

SIOUX CITY -- Work on the northern leg of a proposed trail linking Le Mars and Sioux City could start by next year, even before backers raise …

SIOUX CITY -- A portion of Larsen Park Road will close on Monday morning until further notice, so that riverfront development work can be performed.