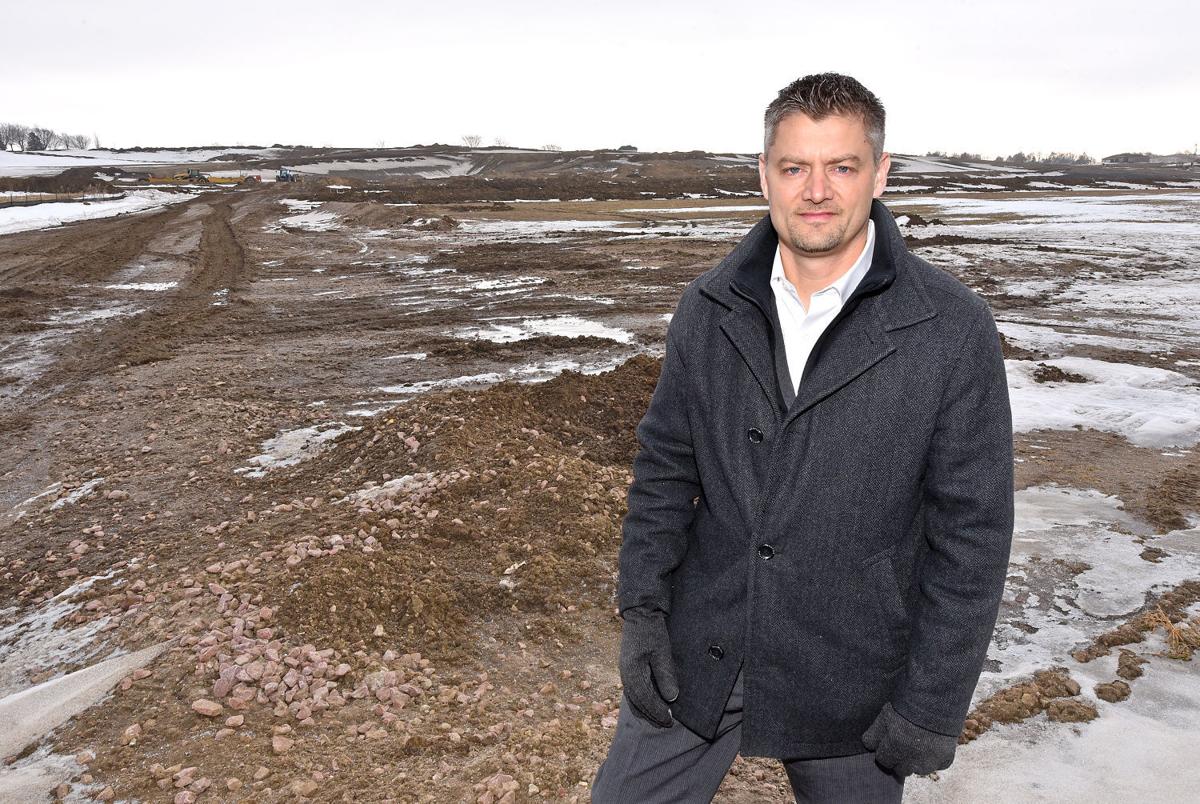 Chris Bogenrief, president of NAI United, is shown on Feb. 17 at the site of the planned Sunnybrook Village development at the intersection of Sergeant Road and Sunnybrook Drive.

Earthwork takes place on Feb. 16 at the site of Sunnybrook Village, a mixed-use development being built at the intersection of Sergeant Road and Sunnybrook Drive. 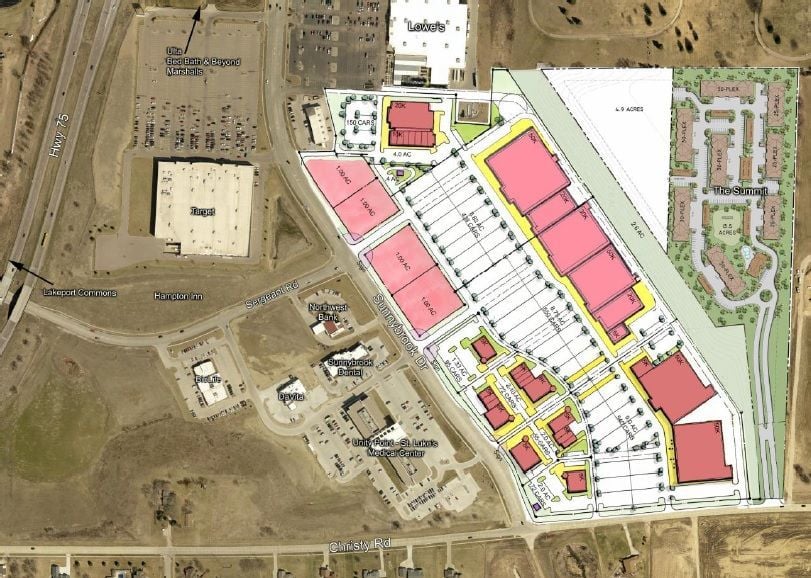 A site plan shows the layout for the proposed 387,000-square-foot Sunnybrook Village retail and residential development in Sioux City.

The project, known as Sunnybrook Village, will begin to take shape in spring 2017, said Chris Bogenrief, president of NAI United.

Bogenrief added the announcement of tenants at the shopping center could come sooner. In about six months, he expects leases to be signed with the four anchor stores for retail space near UnityPoint Sunnybrook Medical Plaza.

Bogenrief declined to identify potential big-box tenants, but said some of them will be making their first entry into metro Sioux City. Others, he added, could be the relocation of existing stores. Last year, officials with the Hy-Vee corporate offices in West Des Moines said the company has no plans to relocate or build stores in Sioux City at the development.

“Several stores in our market are out of space and need a larger footprint,” Bogenrief said. “It’s highly likely there will be several new restaurants out front, but those will be the last things to go.”

So far, three major national retailers have expressed interest in the 387,000-square-foot shopping area, which will be phased in over several years.

Bogenrief said once the anchor stores fill in, the surrounding stores will likely follow suit. He said the development is expected to draw more than 20 stores.

“They’re really not going to start leasing any other spaces until they have those spaces filled out,” Bogenrief said. “The anchors will dictate the changes needed for the site plan.”

Bogenrief added: “My best guess is it’ll be within six months, they’ll probably have executed leases with those anchor stores. They are working with a grocery store.”

Under an agreement with Sioux City, Anthony Properties has agreed to pledge an overall capital investment of $50 million, with $20 million for multi-residential property and $30 million for the commercial property.

Sunnybrook Village will be about 15 percent smaller than Lakeport Commons, a 456,690-square-foot development that opened in 2005 at the intersection of Sergeant Road and South Lakeport Street. Lakeport Commons’ anchor stores include Best Buy and Kohl’s.

Sunnybrook Plaza was developed in 2002, with Lowe’s Home Improvement and Greatland Target as its first anchors. In 2015, three national retailers – Marshalls, Bed Bath & Beyond and Ulta Beauty - opened north of Target.

Bogenrief said as Sunnybrook Village is completed more people will drive to Sioux City to spend money. He said it will take away from those who travel to Omaha or Sioux Falls for retail shopping.

City officials said the development's announcement is a sign that Sioux City still has room to grow. Sioux City is offering up to $7.1 million in incentives to help finance the project.

Mayor Bob Scott called the project "encouraging" about the city's future. He said the project will likely bring new businesses to metro Sioux City, which will improve the city's overall quality of life.

"There's a very strong, ongoing effort to market the shopping center," Dougherty said. "I think you're going to see some major new retailers in Sioux City in the next few years. We're excited about that."

In April 2015, the developer also announced it would bring a 225-unit apartment complex to Sunnybrook Village. The Summit apartments are on a hill behind the retail development. SUN Investors, LLC and Perry Reid Properties of Lincoln, Neb., teamed up to build the apartments.

Dick Salem, vice president of NAI United, said he did not know when the developers will have the apartments opened, adding, “They’re coming along.”

Last year, Alex Perry, a development manager with Perry Reid Properties, said the apartments likely will start at $800 to $900 per month for a one-bedroom unit, but added the cost could change. The target demographic for the apartments includes empty-nesters, young business professionals, families and singles.

On a rainy day in May, a pastor stepped up to the pulpit to say a little prayer. His words floated over bowed heads for Shepherd’s Garden to be a place of peace and mercy when pressures and demands become too great, that it would provide comfort and rest for those who seek it.

The City Council will vote on a series of development incentives for the Texas-based company working on Sioux City's Sunnybrook Village, which will include a more than $30 million shopping area.

Chris Bogenrief, president of NAI United, is shown on Feb. 17 at the site of the planned Sunnybrook Village development at the intersection of Sergeant Road and Sunnybrook Drive.

Earthwork takes place on Feb. 16 at the site of Sunnybrook Village, a mixed-use development being built at the intersection of Sergeant Road and Sunnybrook Drive.

A site plan shows the layout for the proposed 387,000-square-foot Sunnybrook Village retail and residential development in Sioux City.