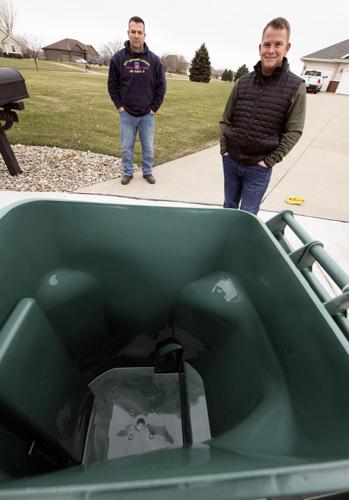 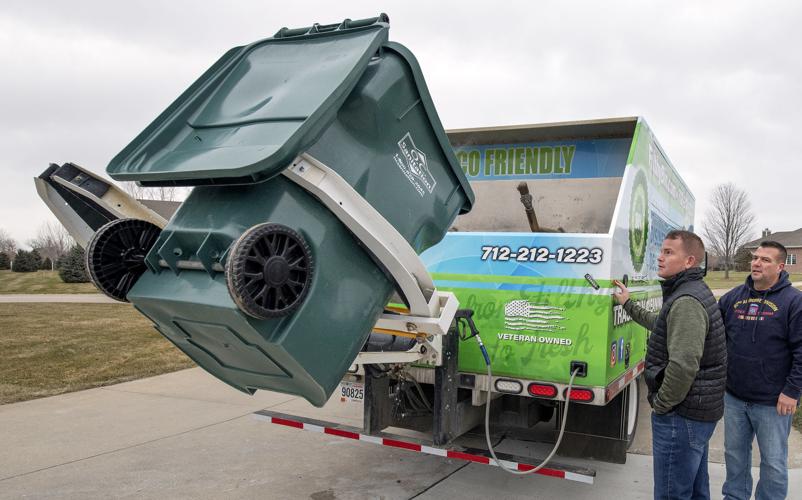 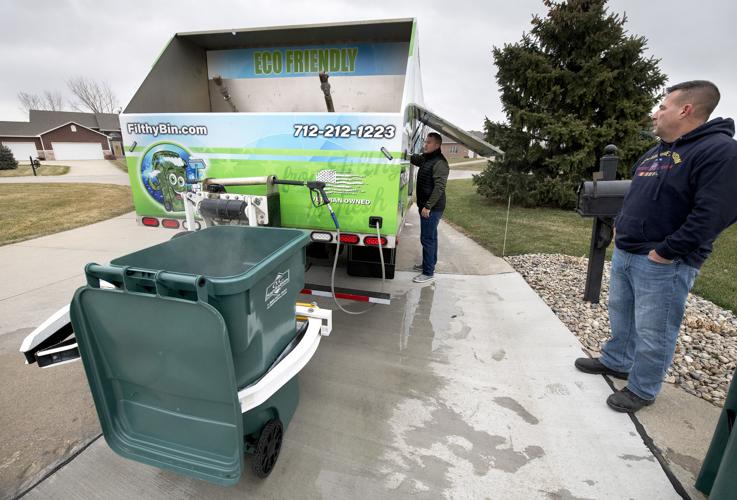 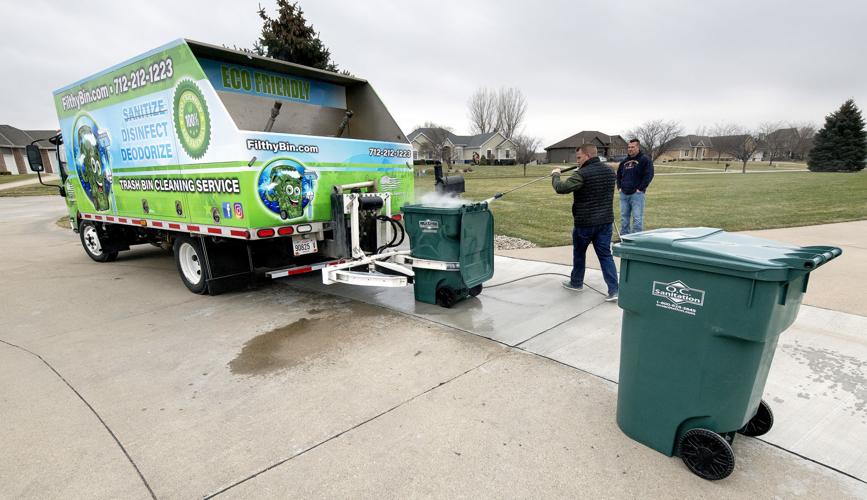 Filthy Bin owner Jeffrey Demers power wash the exterior of a garbage cart in the Wynstone development in rural Jefferson, S.D. on Dec. 10.

JEFFERSON, S.D. -- After hosting a Fourth of July party at his home in Jefferson, Jeffrey Demers grew frustrated with the horrible order emitting from his garbage cans. He tried everything to clean them, even bleach, but nothing seemed to get rid of the smell.

"I was not that satisfied, and I was a little upset that I killed my grass," Demers recalled of using the bleach mixture.

Pressed by his wife to get the bins, Demers enlisted the help of his neighbor, Dirk Richou.

"I said I would help, got out the power washer, and it literally took us three hours to scrub and get them clean and get all the crap out of them," Richou recalled.

From that labor-intensive, smelly ordeal, the two friend and military veterans envisioned a new business venture.

Filthy Bin operates from a customized cargo truck that functions somewhat like a giant, mobile washing machine, or a dishwasher. Richou and Demers went all the way to Salt Lake City to purchase the truck during Labor Day weekend.

"Spent 23 hours driving that thing back, between Jeffrey and I," Richou recalled.

The environmentally-friendly service rapidly grew in popularity. In their initial social media post, Demers and Richou said they would sign up on no more than 10 clients as they worked on the startup.

Thirty-six people showed interest, and they took them all on as customers, spending the next several days familiarizing themselves with the equipment and cleaning bins during their off-work hours. Richou works for Gelita in Sergeant Bluff and Demers works for MidAmerican Energy.

"It just kind of took off like wildfire, with minimal effort," said Richou, who described Filthy Bin as "a second full-time job."

"We had some goals we set, and we pretty much quadrupled our goals," Demers said.

The business offers to clean bins on a monthly, bi-monthly, quarterly, one-time or seasonal basis. Prices start at $15.95 per month for the first bin and $8 for each additional bin.

Today, they have customers as far away as Le Mars, Iowa, and have received inquiries from potential customers in Vermillion, S.D., though at present that is not within their service area.

On collection days, the Filthy Bin truck follows the garbage haulers' routes, stopping at their clients' homes to power wash the outside and inside of the cans, using a high-pressure washer that blasts the cans with 200-degree water. The process purportedly kills 99.9 percent of all bacteria and odor. And it's all done right at the curb.

"It sanitizes, deodorizes and disinfects, at 200 degrees," Demers said.

Richou and Demers pride themselves on being a veteran-owned firm. Demers served in the Air Force between 2006 and 2018. Richou served in the Army between 1989 and 1994. Both were deployed overseas. Richou was stationed in Italy for a few years and served in Desert Storm during the Gulf War, while Demers was sent to the United Arab Emirates.

Serving in the armed forces, Demers said, was good preparation for their new venture, giving them a background in being neat and tidy, and organized.

"Military people are generally cleaner people, we're always disciplined. Things have to be kept clean in the military," Demers said.

The two are devoting a portion of their profits to veterans' organizations in the region, including Midwest Honor Flight (which flies veterans to Washington, D.C. to see veterans' memorials and monuments) and Contact Front (a nonprofit that helps veterans with PTSD). They've also volunteered their services at Siouxland Freedom Park in South Sioux City.

"We both wanted to own and operate a veteran-owned-and-operated company," Demers said. "We have a mission -- as a company, our goal is obviously to make money -- but we have a mission, being military that we both are, veterans, we have a goal to give back to our veterans' organizations throughout Siouxland."

Filthy Bin owner Jeffrey Demers power wash the exterior of a garbage cart in the Wynstone development in rural Jefferson, S.D. on Dec. 10.