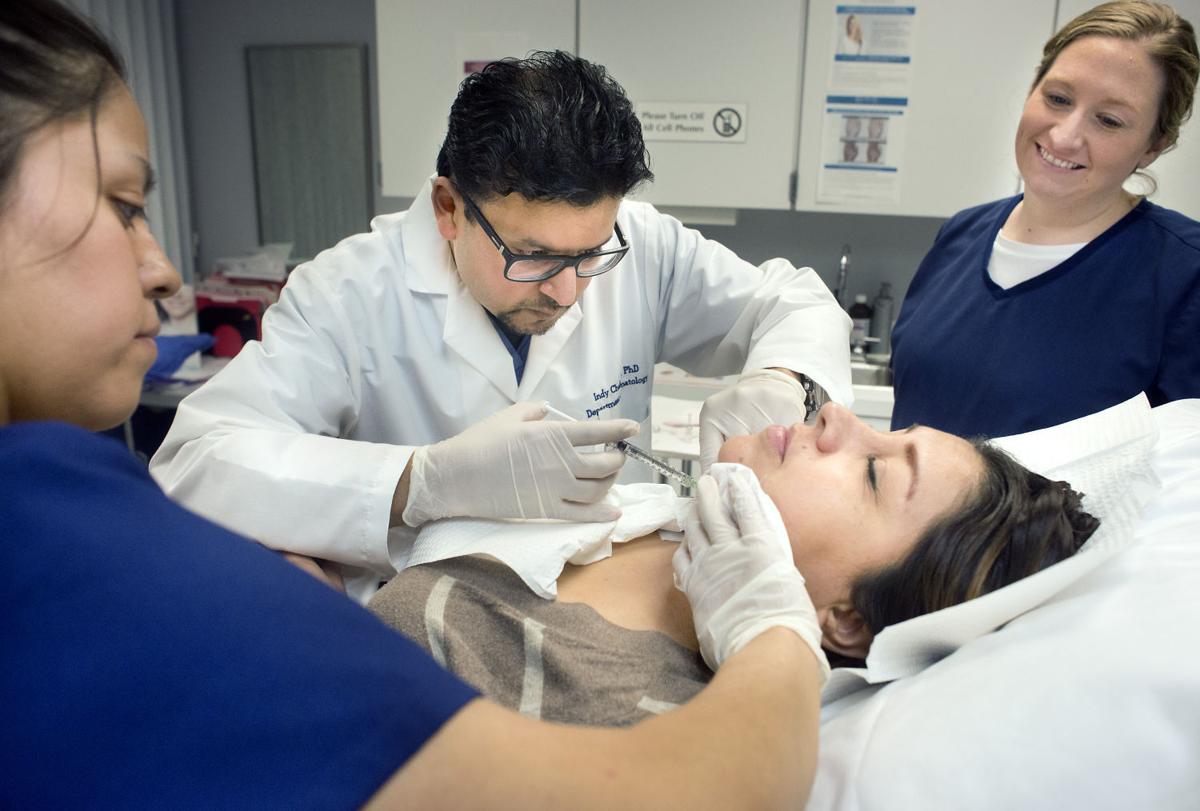 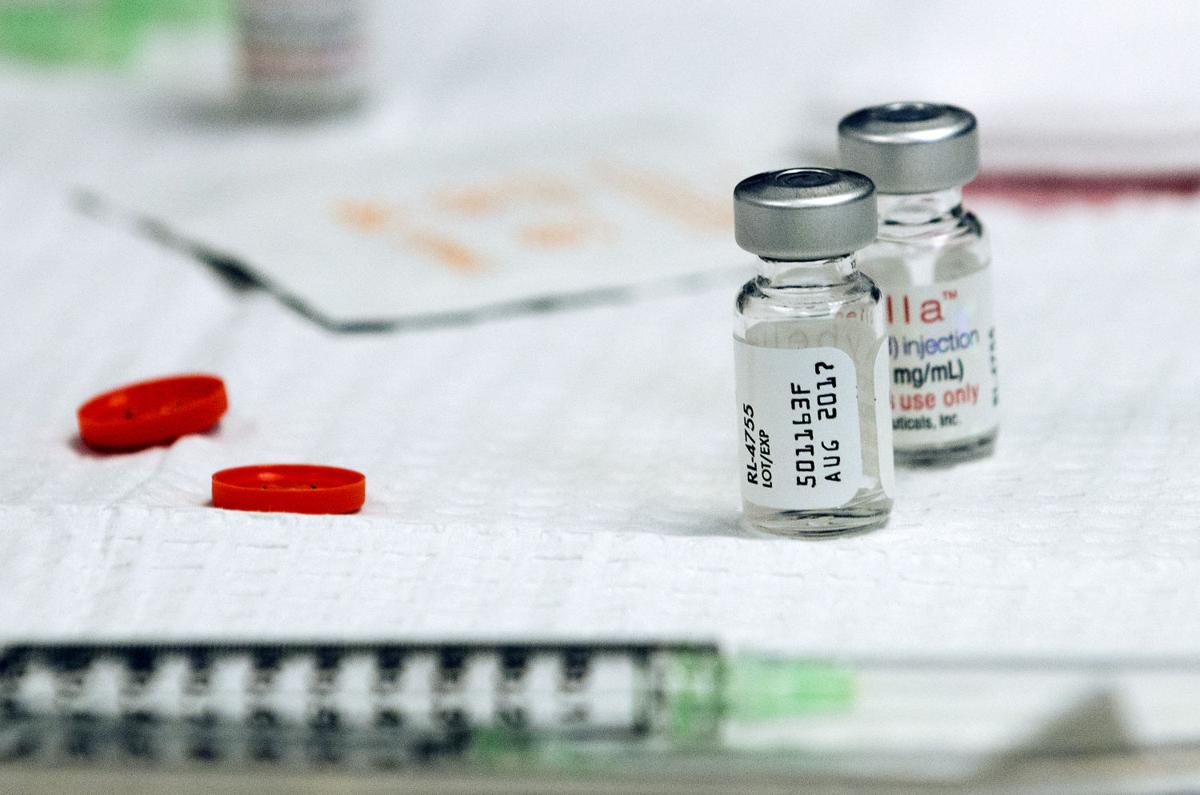 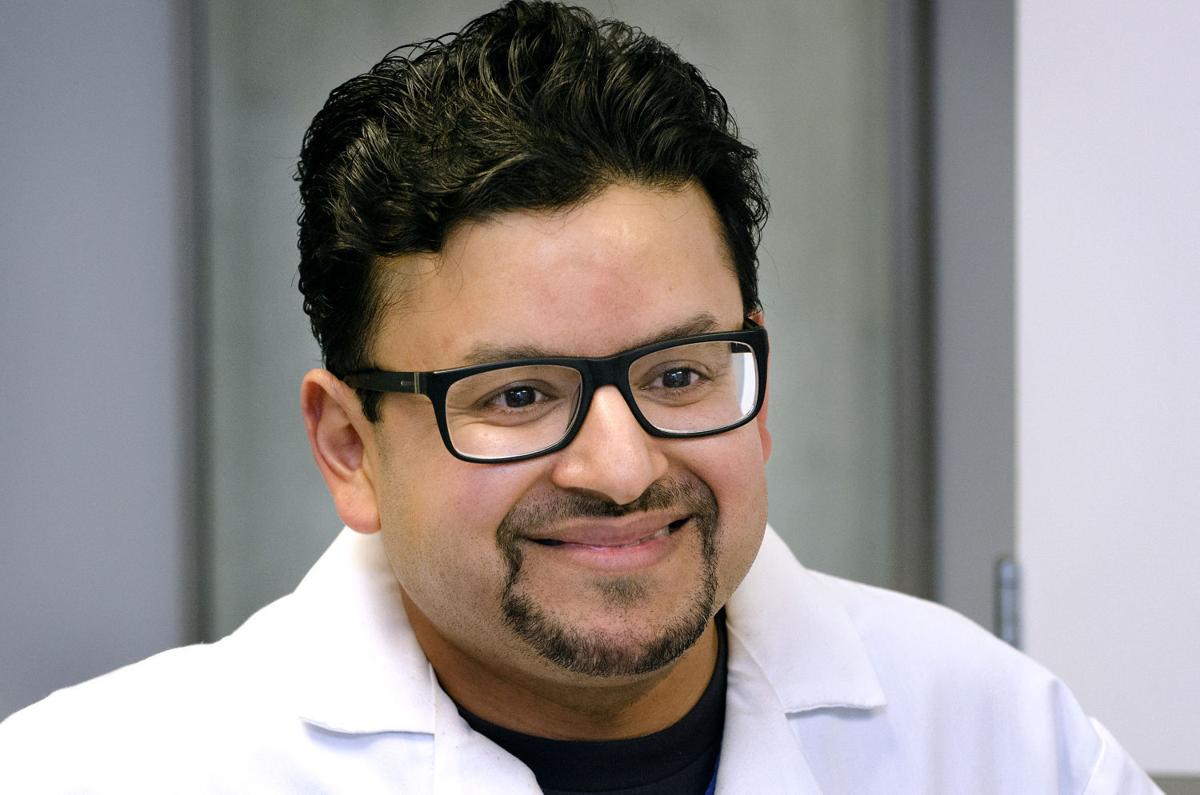 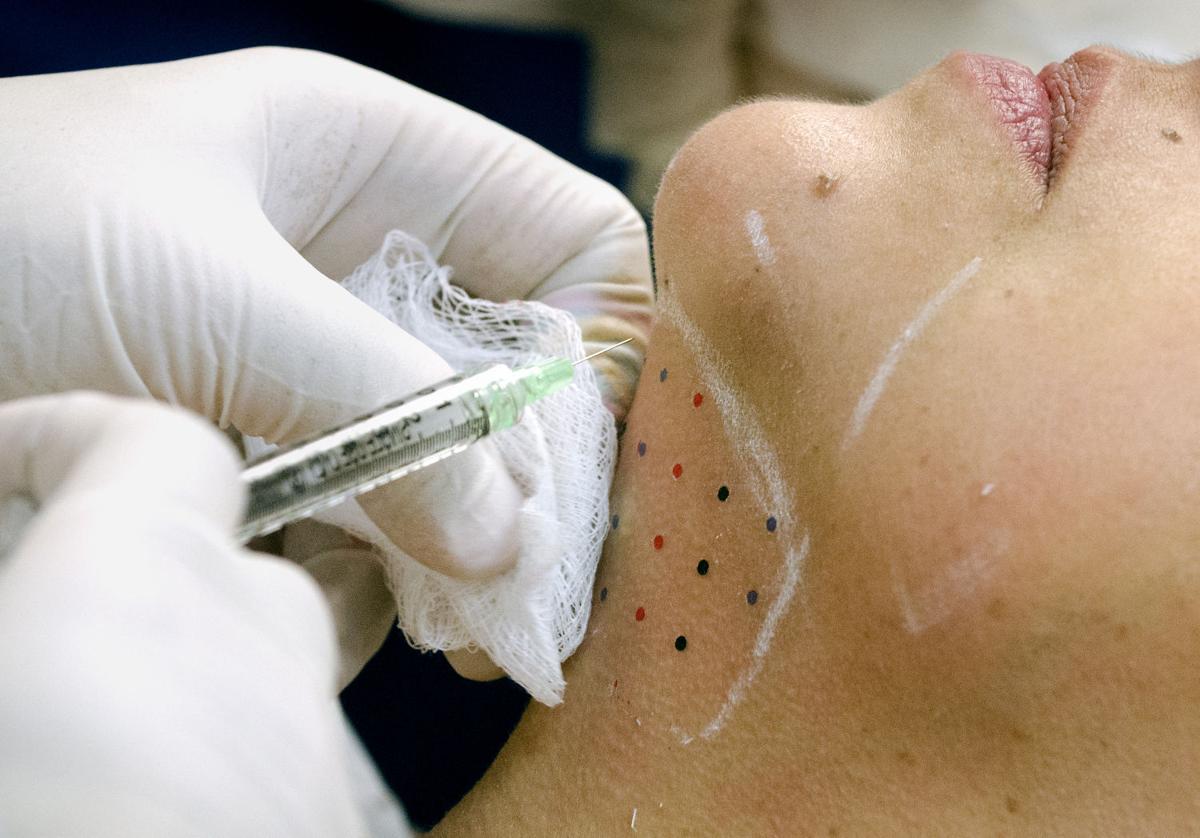 NORTH SIOUX CITY | When Paula Grajeda heard a new injection could rid her of the flab under her chin, the medical assistant at Midlands Clinic in Dakota Dunes, declared she was going to be the first one in line to try it.

"It just bothered me a lot," the 42-year-old Sioux City woman said of submental fullness. "Even when I was skinny I had this problem."

Grajeda closed her eyes as she laid back in a procedure chair on a Wednesday afternoon. Indy Chabra, a dermatologist at the clinic, took a syringe filled with Kybella, or deoxycholic acid, and injected it into a grid of tiny dots that had been transferred onto the numbed area below Grajeda's chin. She received 20 injections total.

"I didn't feel anything," Grajeda said afterward, as she held ice packs against the area which had started to redden.

Kybella, which was approved by the U.S. Food and Drug Administration last April, targets excess chin fat which is caused by genetics, aging and weight.

"There are a lot of people even after they've lost weight or never had excess body weight, who have a little bit of excess fat underneath the chin," Chabra said. "That's really a challenging area for some people, even after they lose weight they still have this little extra fat."

Submental fullness is scored on a 5-point ordinal scale with 1 being very mild and 5 being severe. Chabra said Kybella can benefit patients who have chin fat ranging in severity from 1 to 4. It acts like a detergent as it creates holes in the membrane of fat cells or lipocytes.

"What we're targeting here is pre-playsmal fat -- fat that's above the platysma (muscle fibers extending from the collarbone to the angle of the jaw)," he said. "It's basically excess fat."

Although Kybella goes to work immediately, Chabra said patients can expect to see results over a period of 4 to 8 weeks. Two to four treatments, Chabra said, are required, depending on the amount of submental fullness a patient has. The results are permanent.

"I think that's one of the unique things about this procedure compared to all the other things we do like Botox and filler," he said.

Before Kybella hit the market, Chabra said cosmetic surgery, liposuction and a neck lift, was the only option to treat submental fullness. Surgical intervention, he said, can cost between $5,000 and $6,000. Kybella is $1,200 per treatment.

Side effects associated with Kybella include pain, burning sensation, swelling and numbness at the injection sites. Chabra said these reactions subside with time.

"It was better than I expected," Grajeda said of the pain. "I was told it was going to be real painful."

Chabra will take a look at Grajeda's progress in two months.

As patients become more comfortable with injectables, Chabra thinks Kybella could be used to reduced fat in other areas of the body. But for now, he said the product should only be used as FDA indicated.

As temps drop to single digits and flurries fly, a brave crowd proves it’s never too cold for brisket. They line up outside of a food truck. T…

SIOUX CITY | Hazel Giron stood at a stove with one hand on her hip and a spatula in the other.

SHELDON, Iowa | Thirty-some years ago Patsy Vander Schaaf listened to a cooking show on the radio as she drove down a Sioux County road. A rec…

SoHo chef proves a woman’s place is in the kitchen

After a career in banking, Julie Schoenherr opened a restaurant specializing in American cuisine made from scratch over four years ago.

Learning the art and science behind Siouxland's fine dining

SIOUX CITY | As temperatures plummet outside and the furnace kicks in inside your home, you may notice your skin becoming itchy and irritated.…