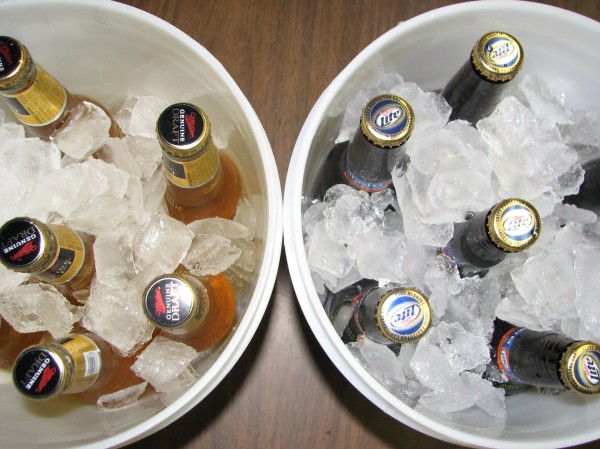 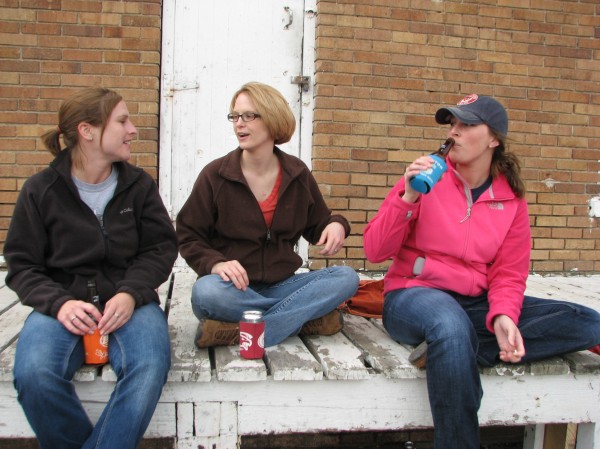 Melissa Lindahl, Steph Turman and Megan Zweber, all of Yankton, S.D., enjoy an afternoon brew on Friday, April 29, 2011, at The Ice House, a tradition along the riverfront in Yankton, S.D., for 83 years. (Photo by Tim Gallagher) 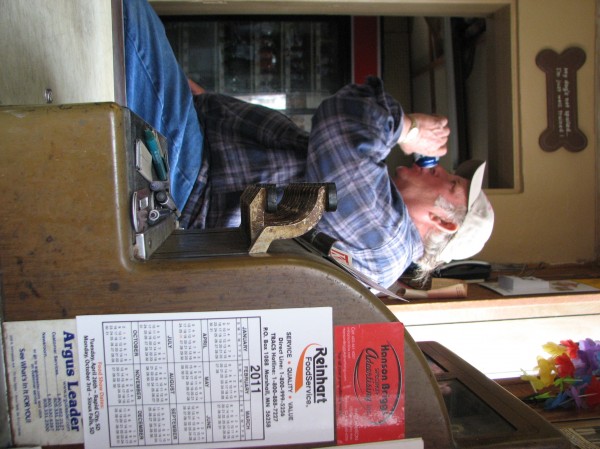 Verlon Rye leans back against a wall on Friday, April 29, 2011, while enjoying a beer and conversation at The Ice House in Yankton, S.D. (Photo by Tim Gallagher) 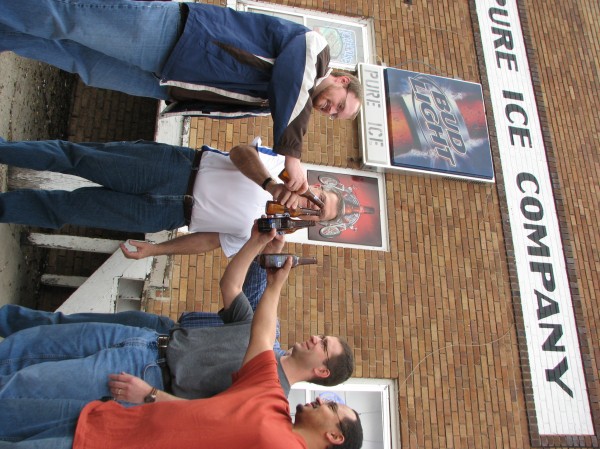 YANKTON, S.D. -- On a windswept Friday afternoon, shortly before 5, the beer flowed at The Ice House. Just as it has since 1928.

"We're still here," said owner Carla Anderson. "Waiting for it to warm up. If it was less windy, I'd have 50 people out here today. We are real weather dependent."

Didn't matter this day to a dozen Yankton area residents, who braved southerly gusts sweeping off the Missouri River some 400 yards away.

"We love the atmosphere," said Steph Turman. "You don't have to wear high heels."

"You get to be outside. It's laid-back," said Megan Zweber.

It wasn't always. The Ice House was constructed as an ice plant in 1928 by Anderson's great-grandfather Keller. The people he built the brick structure for lost their financing. So, Keller had his son-in-law, Iner Anderson, take the building and run the Pure Ice Company.

"They had brine tanks with an ammonia cooling system," said Anderson. "They made 300-pound blocks of ice. It was the first place around here that could produce ice year-'round."

Iner Anderson received a beer license around 1933, when prohibition ended. The place has served chilled beer ever since.

"I like getting out of work on a Friday," said Mel Mehret, who joined five buddies in clanking their bottles to an Ice House spring toast.

The sound preceded another Ice House tradition: The smashing of bottles. Once a beer is downed, the customer can throw the bottle beneath the wooden loading dock. Hundreds of thousands (maybe millions) of bottles have met their violent end against the brick wall beneath the dock.

Six beers for $10 are packed in buckets of ice, either by Anderson, her brother Jim, or the customers themselves. Customers can buy it in cans or bottles. Singles cost $2.

Carla Anderson's dad, Donald, and his brother Darrell took over The Ice House in the early 1950s. They chipped, hauled and bagged ice with their children -- while serving beer -- until 1982, when they decided to remove the ice fields.

The beer stayed. So did the Andersons.

Jim Anderson, who also works as a cartoonist, helped give The Ice House national exposure with an appearance on "The Late Show with David Letterman." He showed his can-smashing skill in a "Stupid Human Tricks" segment. He could hop on one foot and smash 50 cans in 60 seconds.

Customer Kent Buckman recalls a relative who once had a few cold ones at The Ice House much to the dismay of his wife. It was their anniversary, after all.

"Well, Jim set up a bunch of cans in the shape of a heart and we took some video as Jim stomped the cans," said Buckman. The forgetful husband stepped in the center of the heart and said, "Happy anniversary!"

"We showed her the video and everything was OK," Buckman said.

It's yet another story in a long line of 'em served here. The Ice House has been featured on "The Today Show" and in a 2007 Esquire magazine piece on the "Best Bars in America."

Carla Anderson said The Ice House got nearly as much air time on the show as did Mount Rushmore.

A modern townhome nestled in Flatwater Crossing, Ho-Chunk's up and coming housing and commercial development in South Sioux City, features striking views of the Missouri River and the Floyd Monument.

"You’d never see it because she is super modest, super quiet, doesn’t show emotion, but she is a competitor inside. There’s a fire burning deep inside. When she gets up there, she wants to win every time," Lawton-Bronson Archery Coach Jason Carlson said.

Cornhole is becoming a newly popular competitive sport in Siouxland, learn how to get involved

Competitive cornhole -- or bag toss depending on who you ask -- has been growing throughout Siouxland, with both private and city-sponsored leagues.

Alex and Derek Koops, along with teammate Lyle Broughton, of Hopkinson, Massachusetts, were named America's first-ever "Domino Masters" in the Fox television series of the same name.

Melissa Lindahl, Steph Turman and Megan Zweber, all of Yankton, S.D., enjoy an afternoon brew on Friday, April 29, 2011, at The Ice House, a tradition along the riverfront in Yankton, S.D., for 83 years. (Photo by Tim Gallagher)

Verlon Rye leans back against a wall on Friday, April 29, 2011, while enjoying a beer and conversation at The Ice House in Yankton, S.D. (Photo by Tim Gallagher)