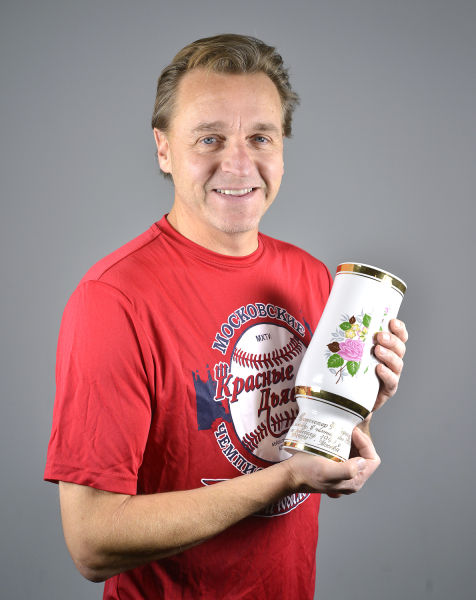 Sioux Cityan Bob Protexter coached baseball in Russia from 1990 to 1996 and helped start the national team in that country. He's shown here holding the vase he received as a member of the team that won the championship of baseball in Russia in 1990. 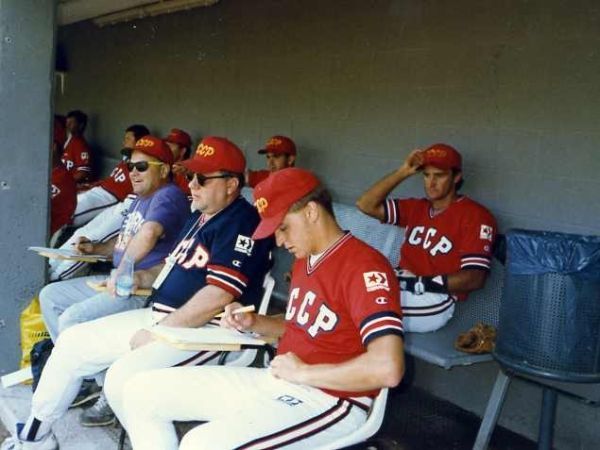 Bob Protexter, front right, makes notes while coaching during a game in Russia in the early 1990s. The Sioux City native spent parts of six years helping coach baseball in the former Soviet Union. Protexter, a Morningside College graduate, worked as an assistant baseball coach at Morninsidge from 1997 to 2005. 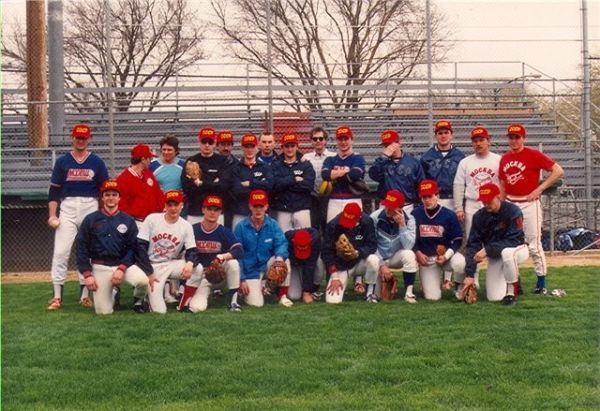 Sioux Cityan Bob Protexter, back row, far right, is shown with the Moscow Red Devils, the national team from the Soviet Union, prior to a game in San Francisco, Calif., in 1991.

As Sochi, Russia, prepares for the 2014 Winter Olympics, the first Olympics in Russia since the 1991 break-up of the Soviet Union, Protexter reminisces about the time of his life he spent helping baseball get started in Russia.

Time of his life? It was.

Protexter holds a vase that represents what a World Series ring would in the U.S. baseball arena.

The vase went to each player and coach with the team from the Mendeleev Institute of Chemical Technology in 1990. The team won what you'd consider the "World Series" of baseball in Russia.

Baseball wasn't indigenous to Russia. Abner Doubleday created the game in Cooperstown, N.Y. Russian children grew up playing other sports. Baseball only became a priority once the Olympic Games recognized baseball as a medal sport in the 1980s.

"Once the International Olympic Committee made baseball an official Olympic sport, officials in the Soviet Union made it their goal to introduce the sport and one day win the gold medal," Protexter says.

The Soviet Union had done the same in hockey and basketball. In the late 1980s, it turned its focus to baseball.

Protexter, an East High graduate who played baseball collegiately for the University of Texas Pan-American and Morningside College, read two stories about the baseball incubator in the Soviet Union. It was 1988.

"I was working nights at Wells' Dairy in Le Mars (Iowa) and I said, 'I want to coach baseball there,'" he recalls.

He took the step of seeking a position that didn't exist. It led to Rick Spooner, a highly educated U.S. citizen working in the Soviet Union for the U.S./U.S.S.R. Economic Trade Council. Just happened that Spooner also loved baseball.

Protexter met Spooner in Baltimore, Md., in October 1988 as Spooner traveled with a Russian baseball team playing an exhibition series against a team from Johns Hopkins University.

"I brought nine letters of reference and spoke only 15 minutes to Spooner," he says.

It was enough. He made an impression on Spooner and 18 months later he sold his car to buy an airplane ticket for a flight to Moscow. He landed on March 3, 1990, and began a six-year stint coaching baseball with some of the Soviet Union's finest athletes.

"Most of the baseball players were great athletes," says Protexter, who made $38 per month. "They wanted to take former athletes leaving their prime and make them baseball players."

The Mendeleev Institute of Chemical Technology got the young coach's full attention. Protexter coached first base and created a practice structure for a collection of baseball novices. Andrei Borodin, the team's head coach, was a former handball player.

Another former world-class handball player, Leonid Korneev became the Babe Ruth of Russian baseball. Protexter coached him, a powerful player who played first base, third base and served as a designated hitter.

"I knew 10 Russian words and the alphabet when I went there," says Protexter, who took a class in Russian at Morningside. "After four months, I could create a sentence."

The first team Protexter had the good fortune of coaching finished 36-3 and atop the Soviet Union. The vase still has a place atop a dresser in his home.

The success allowed Protexter to earn a spot with the country's national team that autumn as it competed in Italy in Pool B of the European Championships. The team defeated a squad from Germany to claim the Pool B title.

"I stood in Parma, Italy, with my hand over my heart listening to the Soviet national anthem (at the medal ceremony)," Protexter says.

In five ensuing years, Protexter, who earned his Morningside degree in political science and history in 1991, traveled with the Soviet team all over the country, into Europe and across the world, playing games from Florida to the Pacific Northwest on a tour of the U.S.

In addition to being interviewed for stories back home in Sioux City, the young coach was featured on "CBS Sunday Morning," and spoke at length for a three-page section of David Remnick's book, "Lenin's Tomb."

"As soon as I got that established, the Soviet Union fell apart (in 1991)," Protexter says. "And that was the worst thing to happen as baseball was in its infancy and players were getting steady checks."

With the decentralization of the government, activities like baseball started over and had to stand independently.

It took time, but the sport continued to make headway. Protexter's work led to employment as a scout for a couple of major league franchises in the Anaheim Angels and the Seattle Mariners. Over the years, he helped sign some 14 Russians to U.S. pro baseball contracts, including Oleg Korneev, the son of Leonid Korneev.

"I helped coach Leonid and I worked as a Russian translator for the Mariners when Leonid's son was signed," Protexter says.

Protexter says that won't really happen until baseball gains a second foothold in the Olympic Games. Like the sport of wrestling, baseball was voted off the Olympic roster of competitions in 2005. Medal play occurred in this sport from 1992 through 2008.

Protexter says talks are ongoing. A meeting of officials very soon may give the sport the help it needs in getting back as part of the Summer Games.

"I'm told the meeting is happening in Russia," he says. "In Sochi, during the Winter Games."

Bob Protexter, an East High and Morningside College graduate, works for Jerry's Pizza in Sioux City and operates Total Baseball Development. He also maintains ties with the sporting world in Russia, thanks to his six-year stint as an assistant baseball coach in the former Soviet Union.

Those ties led to Winter Olympic work for Protexter, 47. He served as a transportation coordinator and translator for Russian leaders as they visited North America for Winter Olympic games in Salt Lake City in 2002 and Vancouver, British Columbia, Canada in 2010.

"Russians love and love to argue about sports," says Protexter, who also worked as an assistant baseball coach at Morningside College from 1997 to 2005. "For 70 years sports was probably they only thing they could argue about; they couldn't argue about politics (or religion). And, the Olympics are the pinnacle of sports."

Rock Valley man stamps, seals and calls it a career

Postmaster Joe Skoda ends a 42-year career with the U.S. Postal Service this month. In retirement, he plans to paint, fish for trout and milk dairy goats.

Ev Bradshaw left home in Sloan on Wednesday and made it to Kauffman Stadium in time to watch his Kansas City Royals clinch their first World Series berth in 29 years.

Sioux Cityan Bob Protexter coached baseball in Russia from 1990 to 1996 and helped start the national team in that country. He's shown here holding the vase he received as a member of the team that won the championship of baseball in Russia in 1990.

Bob Protexter, front right, makes notes while coaching during a game in Russia in the early 1990s. The Sioux City native spent parts of six years helping coach baseball in the former Soviet Union. Protexter, a Morningside College graduate, worked as an assistant baseball coach at Morninsidge from 1997 to 2005.

Sioux Cityan Bob Protexter, back row, far right, is shown with the Moscow Red Devils, the national team from the Soviet Union, prior to a game in San Francisco, Calif., in 1991.