SIOUX CITY -- Baseball has long been in Jim Scholten's blood, from his boyhood days in Larchwood, Iowa, through a long and successful career as a high school and college coach.

Scholten, head coach at Morningside College for the past 28 seasons, will retire at the conclusion of the 2011 campaign.

"I feel blessed to have had the opportunity to have worked with a lot of great student athletes that have shared my passion for baseball, loved to practice the game and loved to play the game," said the 62-year-old Scholten. "To see the players come in and adapt their game to the college level, then make strides and to see them graduate and go on to become productive citizens and start their careers has been most rewarding."

And, they've played some pretty good baseball under Scholten in the process.

His Morningside teams have compiled a 627-612-4 record. A total of 37 of Scholten's former players are coaching baseball in some capacity.

The Mustangs finished with a 32-17 overall record in 2008, capturing the Great Plains Athletic Conference postseason tournament championship to qualify for the NAIA Region III Championships as the No. 1 seed. He guided Morningside to a 42-18-1 mark in 2005, setting a school record for victories in a season.

Scholten was named the 2000 North Central Conference Coach of the Year after guiding the Mustangs to the championship game of the conference tournament.

"Jim loves baseball and Morningside has been fortunate that he has unselfishly shared his passion for the sport with our players for nearly 30 years," Schmutte said.

Scholten began his Morningside coaching career in 1984 after serving six years as head baseball coach at Nevada, Iowa, Community Schools. He compiled a 252-94 career record for a .728 winning percentage in 12 years at Mason City Newman and Nevada and was elected to the Iowa Baseball Coaches Association Hall of Fame in 1992.

The 1970 Loras College graduate led Mason City Newman to the 1977 Iowa Class 1A state tournament. Scholten directed Nevada to Heart of Iowa Conference championships in five of his seven seasons there.

Scholten was on the coaching staff of the Sioux City Explorers of the independent Northern League for the 2004 and '05 seasons.

"Morningside has been a great place to work," said Scholten, who isn't ruling out another job in baseball. "The coaching colleagues have been outstanding and there have been a lot of people who have made working their very enjoyable." 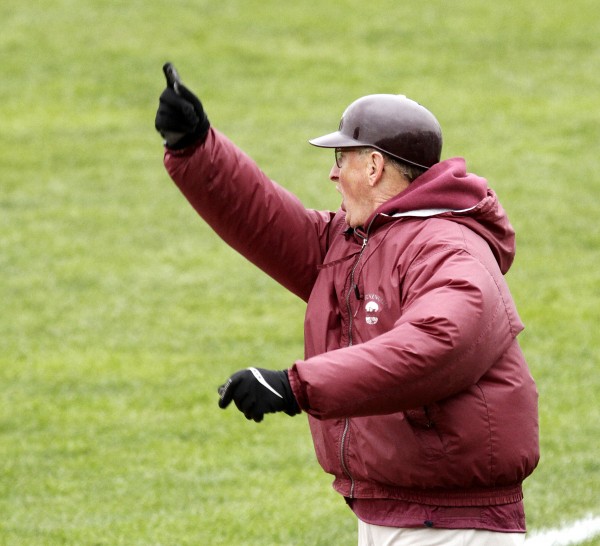 Morningside College head baseball coach Jim Scholten signals a player to keep moving around the bases against Brair Cliff University on April 21 at Bishop Mueller Field. Scholten announced on Thursday that will will retire at the end of the season after 28 years as the Mustangs' baseball coach. 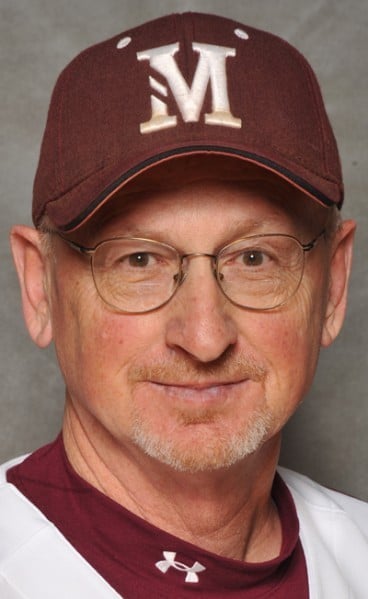