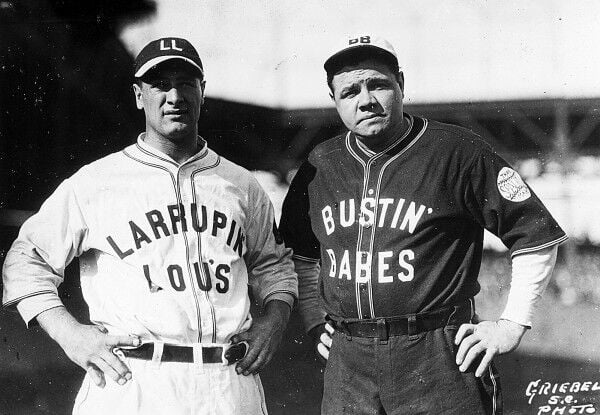 Lou Gehrig, left, and Babe Ruth are shown at Stockyards Park in Sioux City in 1927. 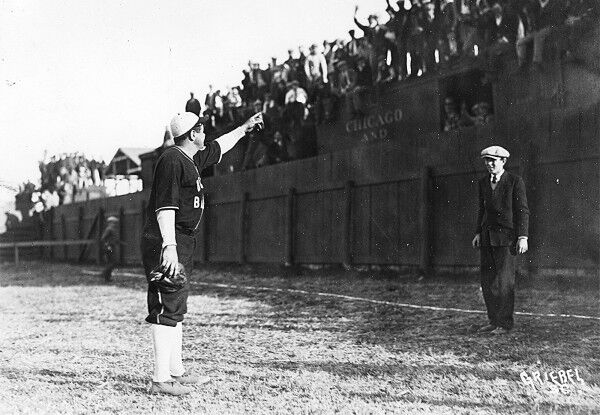 Babe Ruth gestures to fans standing on rail cars in the outfield of Stockyards Park on Oct. 18, 1927. Ruth’s Bustin’ Babes team slugged it out that day with Lou Gehrig’s Larrupin’ Lou’s. Just 10 days earlier, the two Hall of Famers led the New York Yankees to a four-game sweep of the Pittsburgh Pirates in the World Series. 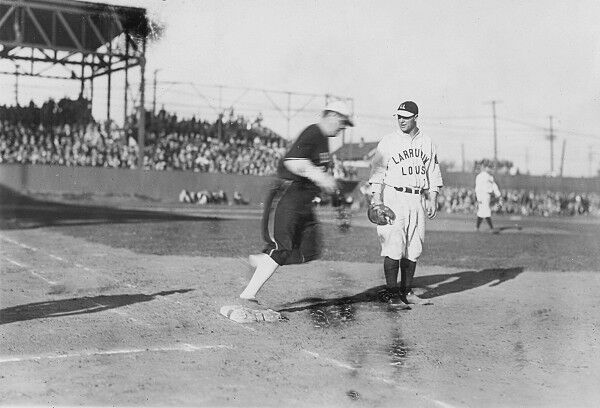 SIOUX CITY -- Imagine, if you will, two of the biggest baseball stars of all time cavorting about in the back yard of a Sioux City home.

Not just your ordinary everyday baseball players, mind you.

Before they became the ‘Sultan of Swat' and ‘Iron Horse.' A mere 10 days after what most consider the greatest baseball team of all time -- the 1927 New York Yankees -- completed a four-game World Series sweep of the Pittsburgh Pirates.

One of the few moving images of the Babe, part of a 16-millimeter film shot outside a Jackson Street residence in Sioux City on Oct. 18, 1927, has recently been made available for public viewing.

The quality is remarkable considering the time. Ruth and Gehrig, wearing the uniforms of their barnstorming baseball teams, are seen relaxing with a group of adults and children.

The film, recently discovered in a cellar in Illinois, shows a 32-year-old Ruth and 24-year-old Gehrig in uniform mingling among well-dressed men, women and children outside a large Jackson Street home.

Ruth's "Bustin' Babes" and Gehrig's "Larrupin' Lous" were playing a game in Sioux City that afternoon.

Keep in mind, the 1927 Yankees, famous for their Murderers' Row lineup, posted a 110-44 record. The Babe clubbed 60 home runs that year, a record that stood for 34 years until Roger Maris broke in it 1961. Gehrig hit 47 home runs and was named the American League's Most Valuable Player.

Although there is no audio, Ruth is shown talking to the camera while Gehrig is holding a small boy and gives him a kiss on the cheek.

As it turns out, the home belonged to the family of John J. "Jiggs" Donohue, president and owner of Rice Brothers, a livestock commission firm located in the stockyards.

Donohue, who hatched many promotional events, brought Ruth and Gehrig's teams to the Stockyards Ball Park after the 1927 season.

The young boy Gehrig is holding was 2-year-old Ken Donohue, while at one point in the surprisingly clear footage Ruth jumps on a pony and models young Jimmie Donohue's cowboy hat. Two more Donohue boys -- Phil and Jack -- are also shown posing with the baseball stars.

"That was an exciting time for our family, although I wasn't in the pictures because I was only 4 months old," said Joanne (Donohue) Sanderson, now of Cherokee, Iowa, and the younger sister of the four boys shown in the film. "My dad was a very outgoing person and he got them to come up there that day before they played a baseball game."

Jimmie Donohue died at the age of 16 from surgical complications related to appendicitis. Ken and Jack Donohue are also deceased. Phil Donohue, 93, lives in Sioux Falls.

Joanne Sanderson, 83, has a twin brother, Tom, who lives in Denver, Colo.

According to a story published in the New York Times last week, Major League Baseball's archive contains less than an hour's worth of moving images of Ruth.

The three and a half minutes of Ruth and Gehrig are part of eight reels of 16-millimeter film discovered in an Illinois cellar.

R.C. Raycraft, whose family owns the 3rd Sunday Market, an antique show in Bloomington, Ill., bought the films for an undisclosed amount from an antique dealer who acquired them as part of an estate sale.

"It was one of those things that fell into my lap," Raycraft said. "I'm a big history fan. Having an interest in baseball and the fact that I'm a filmmaker, it got my attention.

"The fact that they were home movies drew my attention and the films themselves were from the 1920s, so it was really a no-brainer."

At the time the film was made, Raycraft said, a camera of this quality would have cost as much as a new Ford automobile. Simply put, there weren't a lot of people who owned movie cameras.

The most important aspect of collectibles, according to Raycraft, is to be able to track down the origin. He said a photo taken on the same barnstorming tour two days earlier in Des Moines recently sold for $33,000.

"If you were to make a copy of the film today it would have marginal value, but there would be no significance," Raycraft said. "The films, like the photos, if they are original, there is a lot of interest in it."

"A, it was Babe Ruth and Lou Gehrig, days after Babe finished a season where he hit 60 home runs. And B, it was a home movie, not a publicity stunt. It showed people relaxing and hanging out in the back yard.

"It's hard to compare Babe Ruth with anybody. As far as 20th century legends, I think he ranks at the top."

That fact wasn't lost on the Donahue family. The memories from that day were cherished for years and by generations.

"It was a pretty exciting time for our whole family, and we talked a lot about it over the years," Joanne Sanderson said. "Then you'd open up a drawer and there'd be an autographed baseball rolling around."

Raycraft said he has not decided if he would sell the film. He may donate a copy to the Baseball Hall of Fame in Cooperstown, N.Y.

"I'd love to see Cooperstown do something with it," Raycraft said. "You can study the film and see Ruth and Gehrig's true personalities. Ruth was there to goof around and Gehrig to play with the kids."

The 43-year-old's Los Angeles-based business produces law enforcement videos, but Raycraft is familiar with the wheelings and dealings of antiques and collectibles. A dealer at the 3rd Sunday Market asked him if he was interested in "home movies" of Ruth and Gehrig.

"How do you put a value on something like this," queried Raycraft. "It would be hard because it's priceless. It is the type of thing that needs to be seen and people need to know about."

Barnstorming tours were popular in that day and age. It was a way for the players to cash in on their popularity and, in Ruth and Gehrig's case, doubled their regular salaries.

A packed house was on hand for the game in Sioux City, with Ruth and Gehrig playing on opposite teams. The Journal reported that when the regular stands and bleachers were filled, fans jammed along the infield baselines and filled temporary bleachers set up in the outfield.

"It was a rifled hit, straight over the right field fence that sent two runners in ahead of the Clouting Caliph, who jogged around the bags happy with the thought that he had parked one for the crowd," the Sioux City Journal reported the next day. "Gehrig didn't deliver a home run, but the "Larruping one" was a hit with all ages, especially the kids."

Excerpts from the Journal's story, which appeared in "The Way of Life II: Stories from the Yards," written by Sioux Cityan Marcia Poole, went on to report:

"The crowd's enthusiasm swelled into the sixth inning when Ruth's team was leading 4 to 2. Children pressed closer and closer to their heroes."

Police "rushed helter-skelter in a futile attempt" to keep the kids under control. By the eighth inning a ‘deluge of humanity' was on the field."

The teams tried to keep playing but "what chance did any group of ball players have when 5,000 school kids got it into their heads that they wanted to swarm about Gehrig and Ruth? Not a chance. NOT A CHANCE."

According to a Journal story, after the players' train pulled into town, photographers were clamoring for shots of Ruth and Gehrig. Gehrig, though, refused to leave the hotel until he ate breakfast, which that day consisted of a healthy choice of bacon, eggs, bran and two baked apples.

Upon arrival, Ruth went to The Journal office and requested 20 copies of the Oct. 18 edition. Babe, who apparently used the papers for a personal journal, also asked for one copy each of every day from the previous two weeks.

Will the Houston Texans have the worst record in the NFL?

Will the Houston Texans have the worst record in the NFL?

SPENCER, Iowa -- Eight baseballs signed by Babe Ruth during a trip to Spencer, Iowa, have sold at auction for $216,000.

‘Storming' across the country

Lou Gehrig, left, and Babe Ruth are shown at Stockyards Park in Sioux City in 1927.

Babe Ruth gestures to fans standing on rail cars in the outfield of Stockyards Park on Oct. 18, 1927. Ruth’s Bustin’ Babes team slugged it out that day with Lou Gehrig’s Larrupin’ Lou’s. Just 10 days earlier, the two Hall of Famers led the New York Yankees to a four-game sweep of the Pittsburgh Pirates in the World Series.