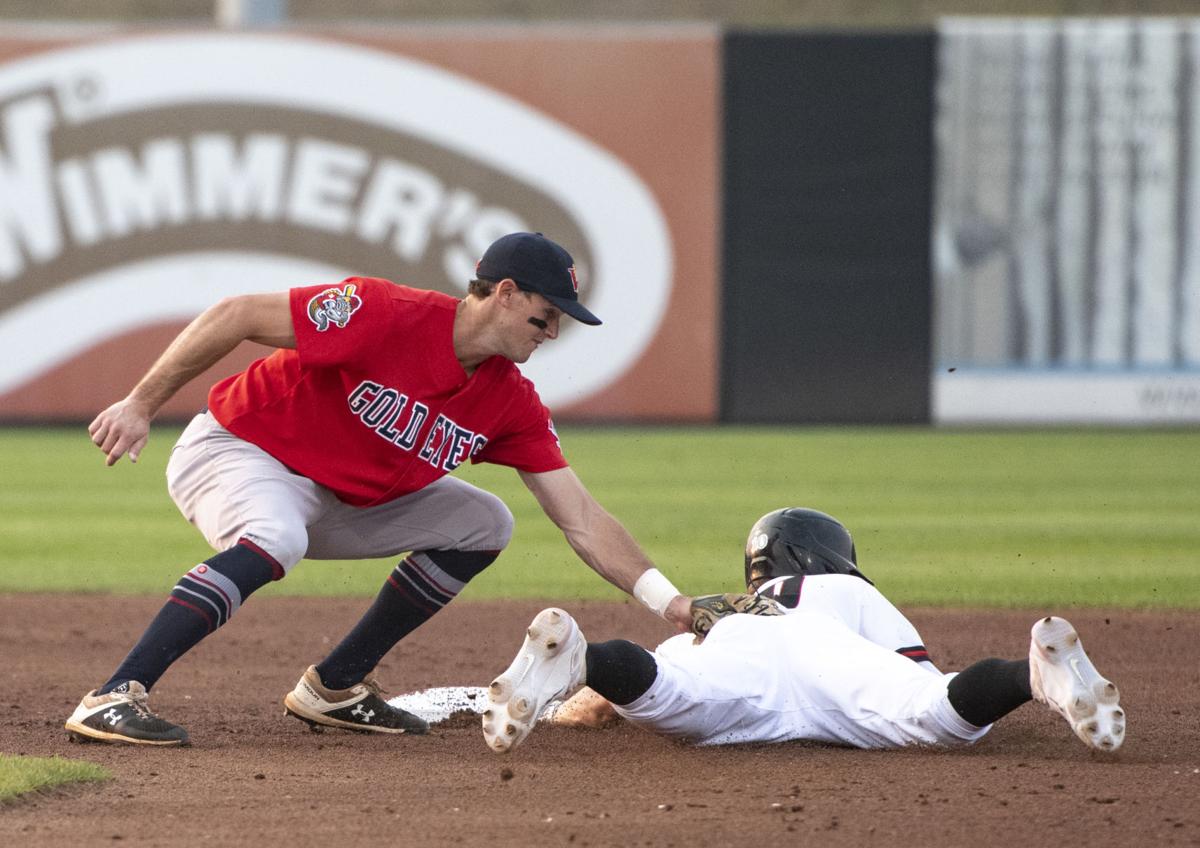 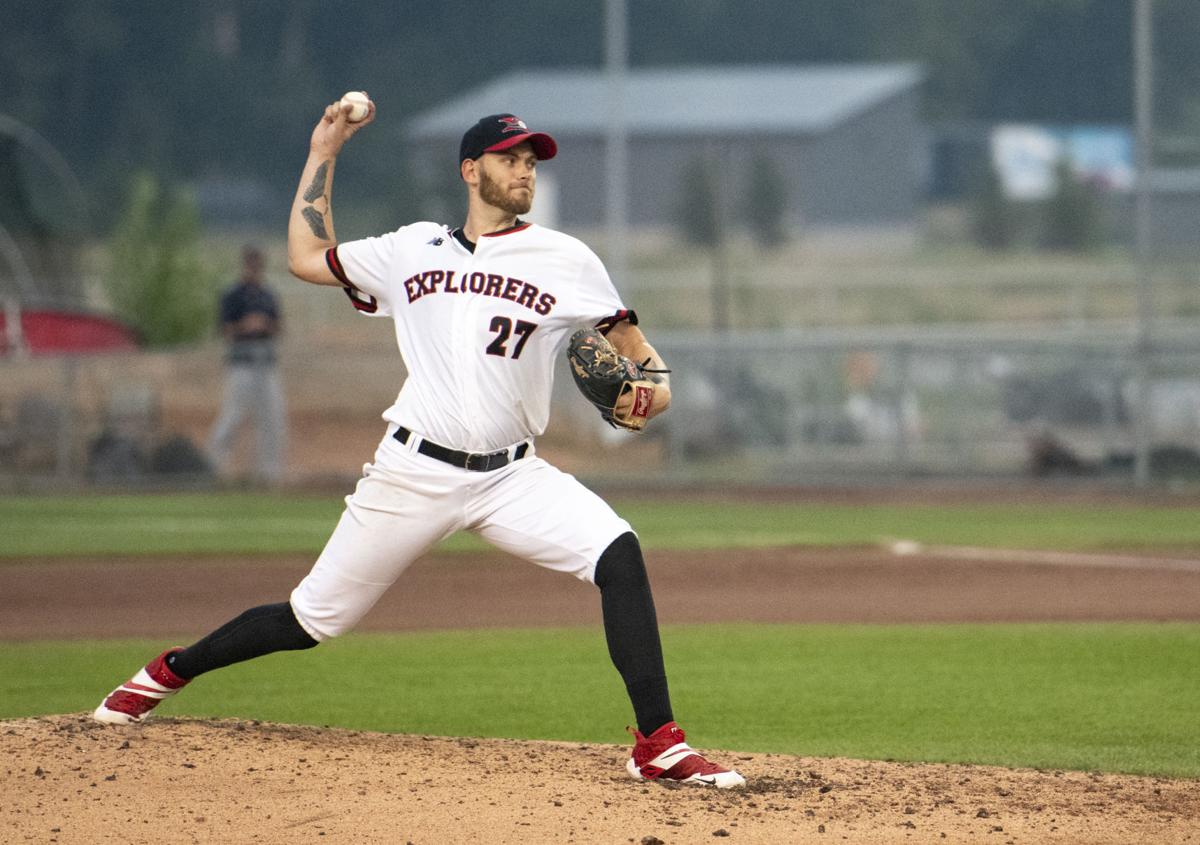 Zach Hedges pitches for the Explorers during a July 29 game against Winnipeg. Hedges pitched on two days rest for the X's on Monday. 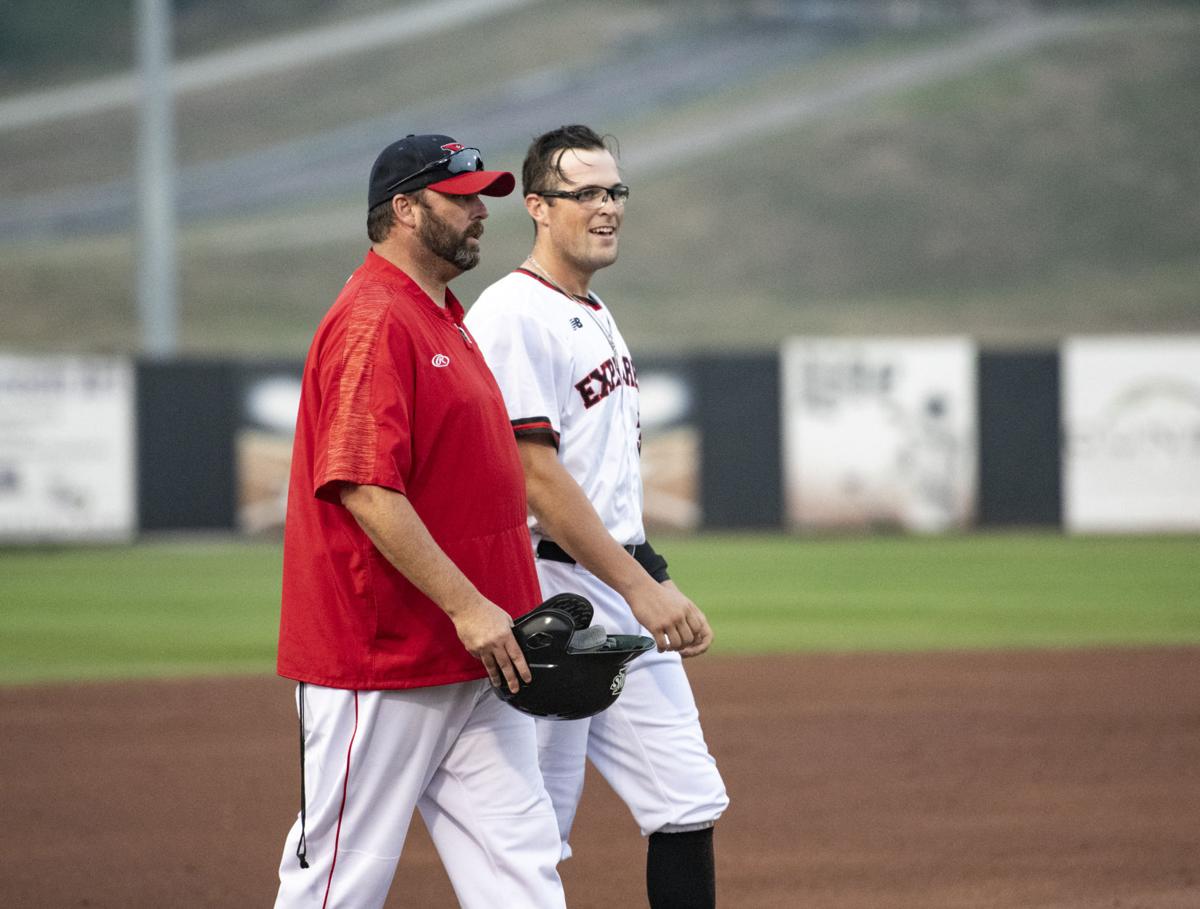 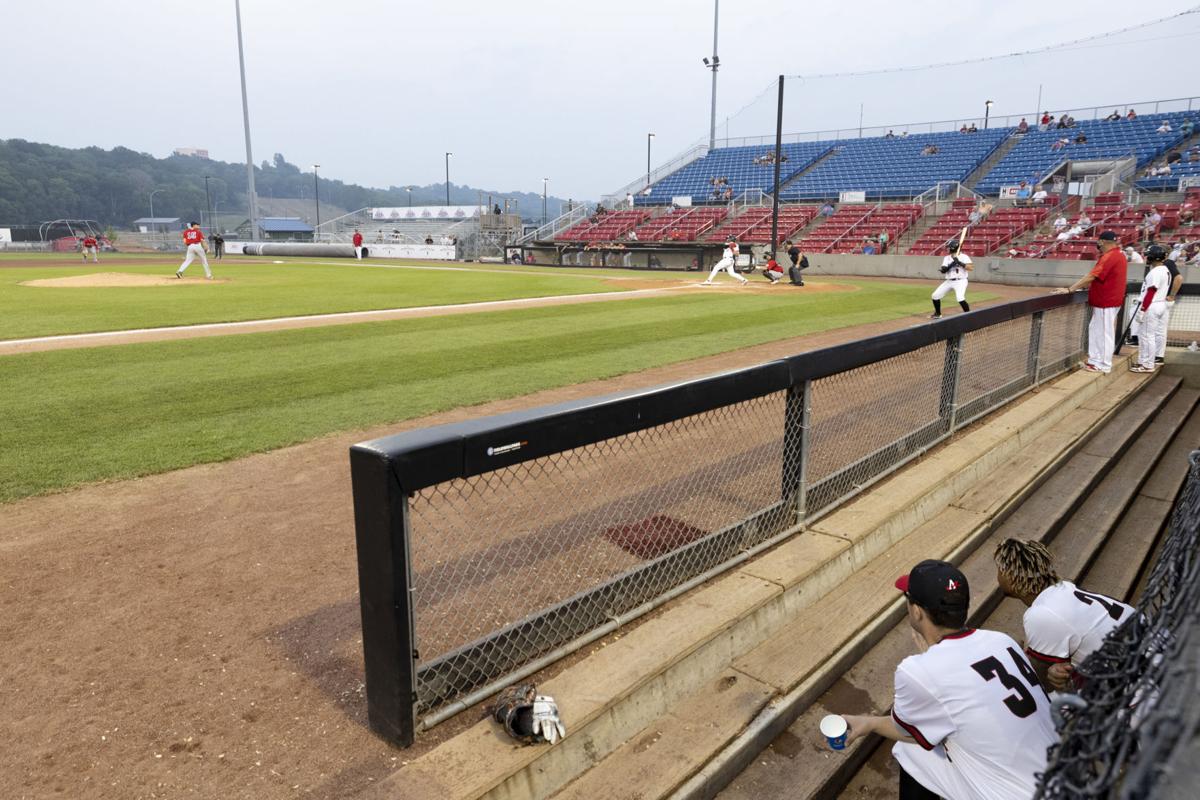 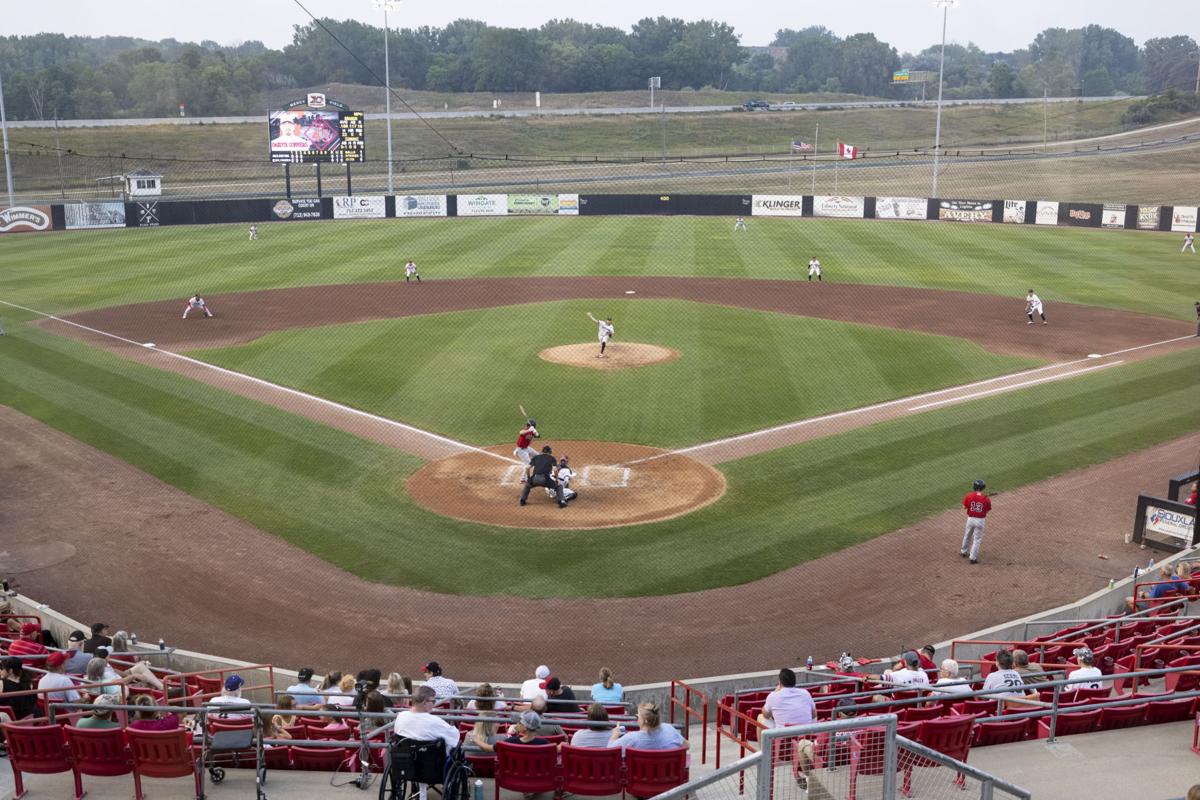 KANSAS CITY, Kan.--The Sioux City Explorers showed plenty of fight on Saturday night in Game Two of the American Association South Division Championship Series, but it wasn’t enough for the X’s to pull off an important win against Kansas City.

A series of booming home runs led the Monarchs to an 11-6 win over the Explorers, giving Kansas City a 2-0 lead in the best-of-five postseason series and leaving the X’s with one more chance on Monday night to keep their season alive.

Thanks to a first inning RBI triple from Monarchs right fielder Gabriel Guerrero, and an RBI double from X’s catcher Mitch Ghelfi, the game was tied at 1-1 going into the bottom of the second inning.

Kansas City responded to Sioux City’s second inning score with four runs on five hits in their half of the frame, including a two-run homer from left fielder Colin Willis, and a two-run RBI single from Guerrero, to surge ahead of the X’s, 5-1.

Sioux City threatened in the top of the third inning by loading the bases on a fielder's choice, a single by Jose Sermo, and a walk by LT Tolbert, but Monarchs pitcher Keyvius Sampson escaped the frame unscathed by getting X’s second baseman Nick Franklin to hit an inning-ending flyout to center field.

After striking out the side in the third inning, Hedges ran into more trouble in the fourth. He struck out Monarchs leadoff batter Alexis Olmeda, but then gave up back to back base hits to Morgan McCullough and Ryan Grotjohn.. At that point, X’s manager Steve Montgomery pulled Hedges in favor of left-hander Tyler Koch.

Hedges exited the game having allowed six earned runs on nine hits, with one walk and seven strikeouts over 3 1/3 innings.

Koch’s first batter, Sweeney, hit a sacrifice fly to center field that scored McCullough from third base, to extend Kansas City’s lead to 6-1.

Sioux City’s offense finally strung some runs together in the top of the fifth inning, as back to back doubles from Seamus Curran and Tolbert scored one run, and a two-run homer by Franklin pulled the X’s to within two runs of Kansas City, at 6-4.

The X’s looked nearly certain to at least tie the game in the top of the sixth, when they loaded the bases with nobody out on a single by Errol Robinson and back to back walks from Harris and Milligan. But Monarchs pitcher Carlos Diaz had other plans.

Diaz dug deep, and struck out Sermo, Curran, and Tolbert in order to complete the high-wire act and escape the inning without any damage.

Tolbert struck out looking to end the inning, and was immediately ejected by home plate umpire Jacob Keefauver after protesting the call.

In the bottom half of the sixth inning, the Monarchs blew the game wide open, as a grand slam by Willis against X’s reliever Brandon Brosher put Kansas City up, 10-4.

"I thought we made three pitches at crucial times in the game that were strikes, that did not go our way, and it cost us a lot of runs," Montgomery said. "One was a grand slam, a run in the first, and then two or three runs in the (second) inning, or whatever it was that they scored, you take those runs off the board, it's a completely different ballgame."

"I know my team is really dejected about it. They feel as though maybe something was taken away from them, but we've got to pick our head up, and we have to come out Monday night ready to go, and put this all behind us."

The X’s managed to score two more runs in the game, as a solo homer in the seventh by Mitch Ghelfi, and another in the eighth from Curran, put the score at 10-6, but the Monarchs added another of their own in the eight with a solo homer from Sweeney, and the X’s couldn’t mount a comeback.

Hedges got the loss, while Diaz was the winning pitcher for Kansas City after allowing no runs and one hit over 1 ⅓ innings, with two walks and five strikeouts.

The teams combined for 28 hits in the game, and six total home runs.

"Kansas City's ballpark is very very offensive laden, so you expect those kind of numbers when you go into this ballpark," Montgomery said. "Now we've got three games in a more spacious environment. We have to do what we do. We have to keep the pressure on them, we've got to get balls up in the zone, we can't miss those pitches. We've got to keep putting the pressure on them."

The Explorers and Monarchs will have an off day Sunday, before returning to Sioux City for Game Three on Monday night at 7:05 p.m.

With a win on Monday, the X’s would force a Game Four, while a loss would end Sioux City’s season, and send Kansas City to the American Association Championship Series.

Game Four and Five will be played on Tuesday and Wednesday in Sioux City, if necessary.

SIOUX CITY — It's been quite the successful week in the Austin Johnson/ Tyler Wingert household.

Zach Hedges pitches for the Explorers during a July 29 game against Winnipeg. Hedges pitched on two days rest for the X's on Monday.