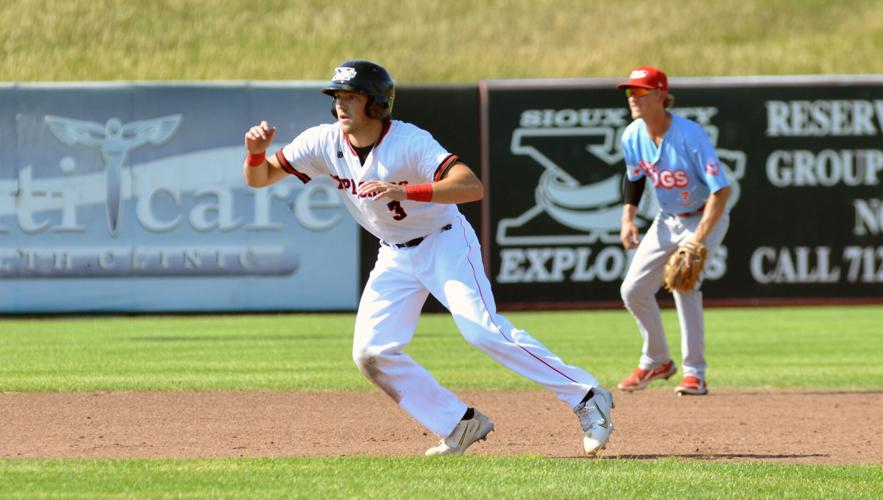 Explorers catcher Jack Kelly takes his secondary lead from second base during Sunday's 8-7 win over Chicago at Lewis and Clark Park. 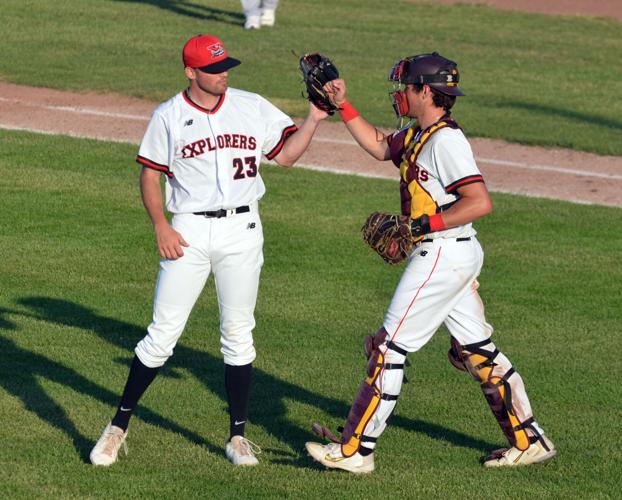 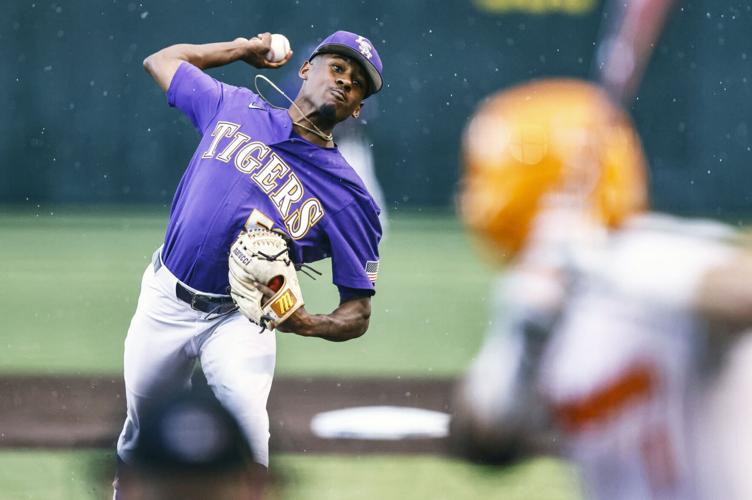 SIOUX CITY — While the Sioux City Explorers were on the road last week, they picked up a catcher and a pitcher right out of college, hoping they can help the team get back into the playoffs.

The Explorers first took Jack Kelly, a catcher from the University of Minnesota.

It’s the second Gophers alum the X’s have signed this season, as Tom Windle was brought on before the All-Star break.

Kelly entered Wednesday night’s game at Fargo-Moorhead with a .214 average in 10 games. He has six hits, including a home run.

Kelly’s first hit came on July 24 at Milwaukee, and he remembered the feeling as he reached first base.

Three nights later, Kelly hit his first home run in a 9-8 win over the RedHawks.

“I feel really part of the team and it makes me feel like I’m contributing,” Kelly said. “I’ve talked to most of the guys about hitting and catching, and with pitchers about how they like their catchers to set up. I think just putting together a bunch of things and (I’m) trying to put it all together one day at a time.”

Kelly is the seventh catcher that the Explorers have used this season. The Explorers started the season with Mitch Ghelfi on their roster, but through injuries — and a pick-up of Tyler Rando by the Miami Marlins — rookie catchers like Kelly and Shane Podsednik are here to prove they can swing it with the American Association pros.

“When you have seven different signal callers, learning the pitching staff is very hard,” Explorers manager Steve Montgomery said. “Before the game, if you ever come around before the game, we meet with the starting pitcher and the starting catcher, and we lay out the scouting report. All the way down whether a guy is a bunter, if he takes on the first pitch, or if he’s a pull hitter. It is laid out. At that point, it is up to the players to execute.”

Montgomery said that Kelly may have tried to do a little too much in his first few games, but noticed that Kelly is growing in even the two weeks he’s been with the X’s.

“He can play anywhere on the field, but he’s like that super utility guy,” Montgomery said. “I don’t know whether he can pitch. He’s been an unbelievable teammate. He’s been super supportive of everybody. Super nice kid. I don’t expect anything else out of college kids. Great to have around.”

If Kelly doesn’t catch, Montgomery likes to put him and second or third base. Montgomery said he wouldn’t be afraid of putting the Gopher catcher out in the outfield, either.

Kelly said while the X’s were home last weekend that the biggest difference about playing independent baseball, is that you’re on your own in terms of eating healthy and learning about the game on your own.

Kelly didn’t have much time to get acclimated to the Sioux City food scene, as the X’s were only home for three games against Chicago last weekend.

When Kelly was with Minnesota, he had an eating regimen that the Gophers provided, as well as a strength and conditioning program.

Here with the X’s, Kelly is on his own for food. He said last Friday his first Sioux City meal was at the Culver’s on Singing Hills Boulevard.

“It’s been fun so far,” Kelly said. “It’s been similar in terms of following my routines every day. Baseball is the same game, whether you’re playing in indy or in college. It’s definitely a little more independent. I’m just trying to learn from some of the older guys.”

Kelly first started his collegiate career at the University of Northwestern before transferring to the Big Ten school in Minneapolis.

Kelly was the Dick Siebert Memorial Team MVP and Paul Molitor Batting Champion, as voted on by his team. He was also All-Big Ten Honorable Mention.

The Gopher redshirt senior started in 50 games for coach John Anderson, and he may have saved one of his best games for last.

On May 20 against the Wildcats, Kelly went 3-for-5 with two home runs, six RBIs and two runs scored.

He knocked in 45 runs and hit eight homers.

“He put a lot of work into his career,” Anderson said. “He was in the right place mentally, physically and emotionally with our program. His development was impacted by COVID, and he just started to hit his stride last year for us. I think there’s better baseball ahead of him for us. It’ll be fun to watch his development.

“If we had normal times, I think his development would have happened sooner,” Anderson added. “He came back here and wanted to be a part of our program. The thing I loved about him is he was willing to throw stuff at the wall and see if it stuck. He was very open-minded. As his career went on, he never quit learning.”

Even on the field, Ma'Khail Hilliard still had his purple and gold shoes on. He didn’t have much time to pack up from Louisiana State in Baton Rouge, Louisiana, to Fargo to meet up with the Explorers last week.

He didn’t have much time to get acclimated. He was announced as a new acquisition by the team on the afternoon of July 28 and pitched later that night.

So, Hilliard took what he had with him and met the team on the road.

He arrived in time to watch the game on Wednesday before taking the mound on Thursday.

Hilliard was the other piece the Explorers added last week along with Kelly.

Hilliard went back-and-forth between the rotation and bullpen during his time with the Tigers.

His best season, however, was his fifth year.

He ended up with 73 strikeouts, the most since his freshman year when he had 70. He had seven strikeouts in three games this season.

Hilliard has been a starter for the Explorers, and both of his starts have been with the RedHawks.

“He’s a kid who comes from a big-time program,” Montgomery said. “We saw what we thought he was going to do. He has four pitches he can throw for strikes in the video we saw. He’s pitching for contact, but he has swing-and-miss secondary stuff.”

Speaking of Wednesday's loss, Danry Vasquez had an RBI single during the sixth inning and Sebastian Zawada homered in the ninth.

WHO: Kansas City at Sioux City

The American Association announced on Friday that the Sioux City Explorers traded infielder Nick Franklin to the Kane County Cougars. Franklin started the year with the Explorers, but was sidelined due to a lower-body injury.

“I’m just happy to be back with the guys,” .@SiouxCityXs pitcher Matt Pobereyko said. “These guys, the coaching staff, the players, they’re all my friends. We stay in contact, whether I’m here or not. It’s just a smooth transition."

Explorers catcher Jack Kelly takes his secondary lead from second base during Sunday's 8-7 win over Chicago at Lewis and Clark Park.