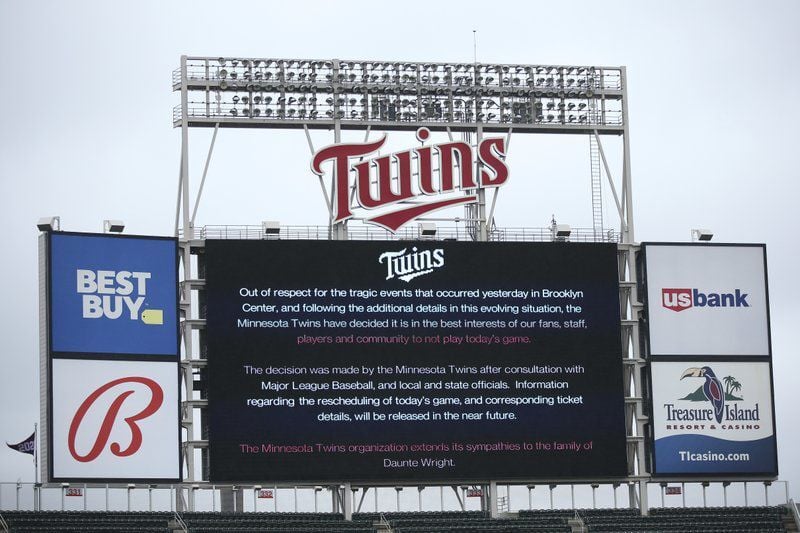 The Minnesota Twins have postponed their game against the Boston Red Sox because of safety concerns following the fatal police shooting of a Black man in a nearby suburb. (AP Photo/Stacy Bengs) 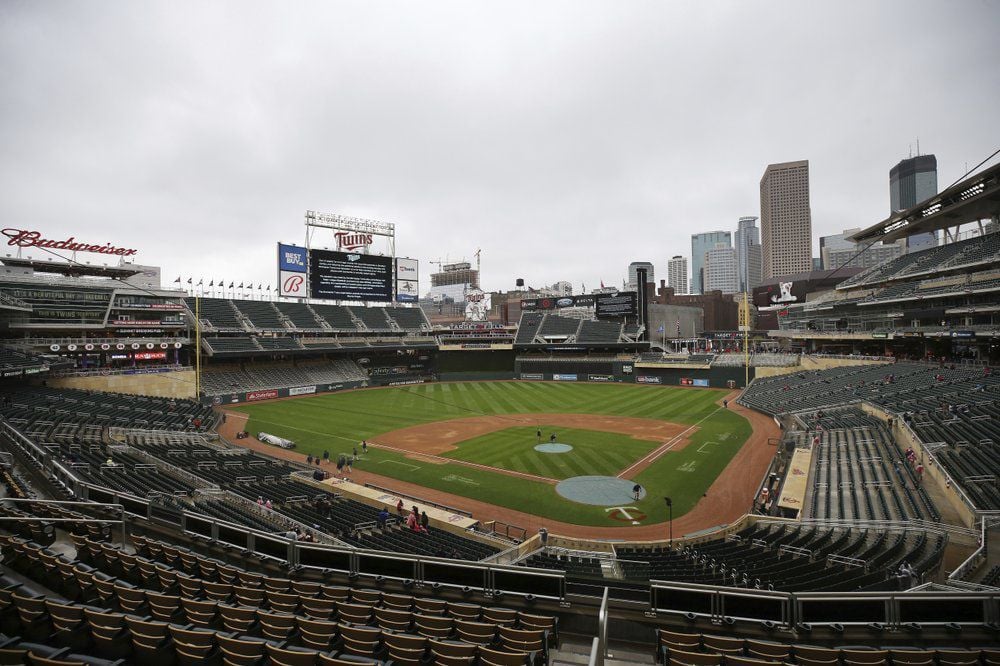 The scoreboard at Target Field explains the postponement of the baseball game between the Minnesota Twins and Boston Red Sox, Monday, April 12, 2021, in Minneapolis.

MINNEAPOLIS — The Minnesota Twins, Wild and Timberwolves all postponed games scheduled for Monday because of safety concerns following the fatal police shooting of a Black man and the potential for unrest in the area.

Major League Baseball’s Twins and Boston Red Sox were scheduled to begin a four-game series on Monday afternoon at Target Field. The Twins said their decision was made in consultation with MLB and state and local officials “out of respect for the tragic events that occurred yesterday.” There was no word yet about rescheduling or the status of games set for Tuesday, Wednesday and Thursday.

“We came to the conclusion that the right thing to do was for us to not play today, rooted in respect for the Wright family but also rooted in our mind in the safety of all of those involved in today’s game,” Twins president Dave St. Peter said.

The NHL’s Wild were supposed to host the St. Louis Blues on Monday night, a game the team said was postponed “out of respect for the community.” That game was rescheduled for May 12.

The NBA also announced that Monday night’s scheduled game between the Timberwolves and Brooklyn Nets was postponed “in light of the tragic events in the Minneapolis area.”

The shooting of 20-year-old Daunte Wright occurred Sunday after a traffic stop in Brooklyn Center, a suburb adjacent to Minneapolis. The death sparked violent protests, with officers in riot gear clashing with demonstrators into Monday morning. The Brooklyn Center police chief said the shooting was accidental, as the officer involved intended to fire a stun gun and not a handgun during a struggle with Wright. Police were trying to arrest him on an outstanding warrant.

Gov. Tim Walz announced a curfew from 7 p.m. Monday until 6 a.m. Tuesday for three counties that include Brooklyn Center, Minneapolis and the capital of St. Paul.

The metropolitan area already has been on edge because of the ongoing trial of the first of four police officers charged in George Floyd’s death last May.

“Our thoughts and prayers to the Wright family,” Red Sox manager Alex Cora said. “Obviously a tough situation, sad situation, especially in this area, right? It’s been tough the last 12 months, with everything that’s going on.”

With security precautions already increased in downtown Minneapolis due to the trial of Derek Chauvin, the white officer whose knee was pressed on the neck of Floyd, a handcuffed Black man who died, the Red Sox were staying at a hotel outside the city. Most visiting teams stay within a few blocks of the ballpark.

“When you make these decisions, you do so in a very preventative way and out of an abundance of caution,” St. Peter said. “With the unknown of what could transpire across our community in the next several hours was, I think, in our mind, enough of a risk, so to speak, that we felt it was in the best interest to allow everybody to go home and let’s assess kind of where we are tomorrow and we’ll make a decision about tomorrow’s game tomorrow.”

Brawl breaks out between Cowboys, 49ers fans outside AT&T Stadium

These rare photos show Tom Brady from his baseball days

These rare photos show Tom Brady from his baseball days

The Minnesota Twins have postponed their game against the Boston Red Sox because of safety concerns following the fatal police shooting of a Black man in a nearby suburb. (AP Photo/Stacy Bengs)

The scoreboard at Target Field explains the postponement of the baseball game between the Minnesota Twins and Boston Red Sox, Monday, April 12, 2021, in Minneapolis.