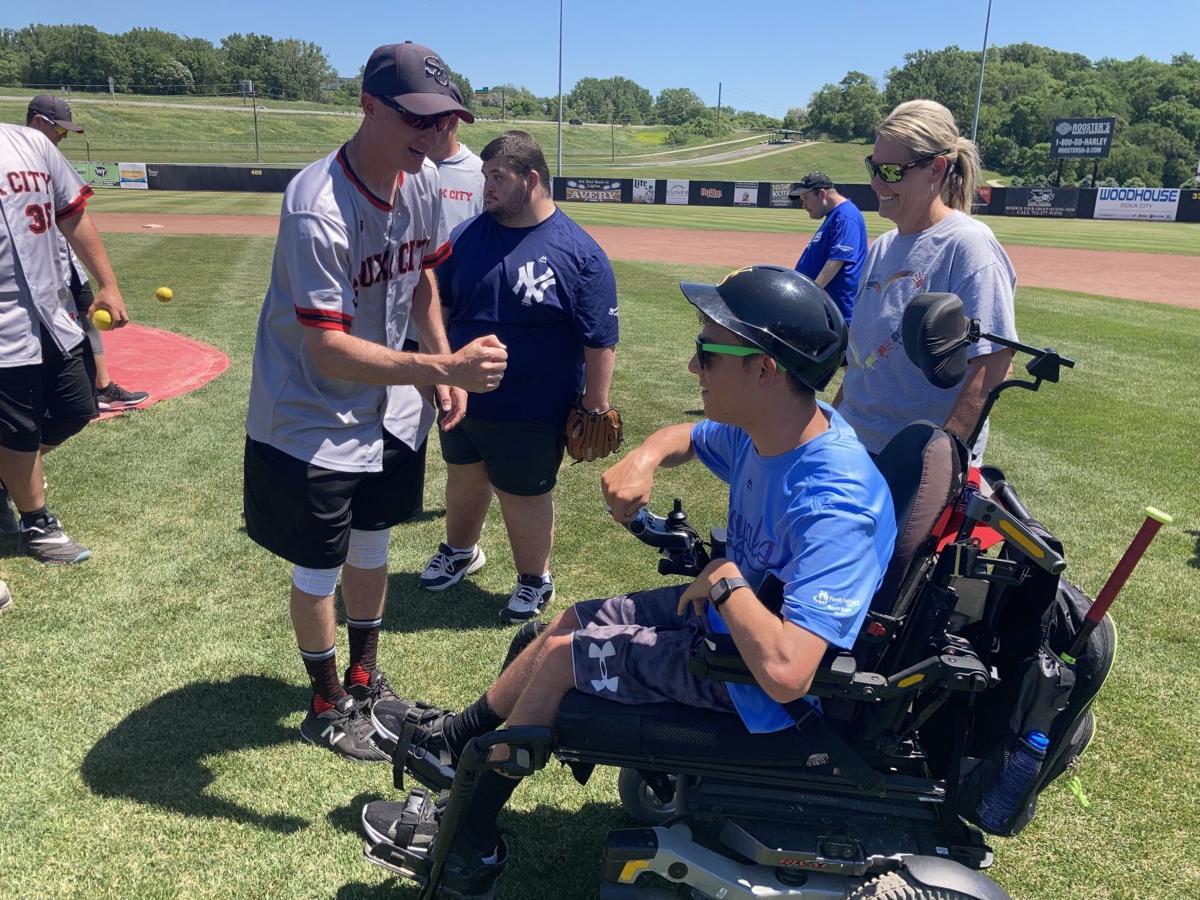 Jess Gibson of Wayne, Neb., gets a fist bump from Explorers' player Nate Samson, as Shannon Gibson looks on. 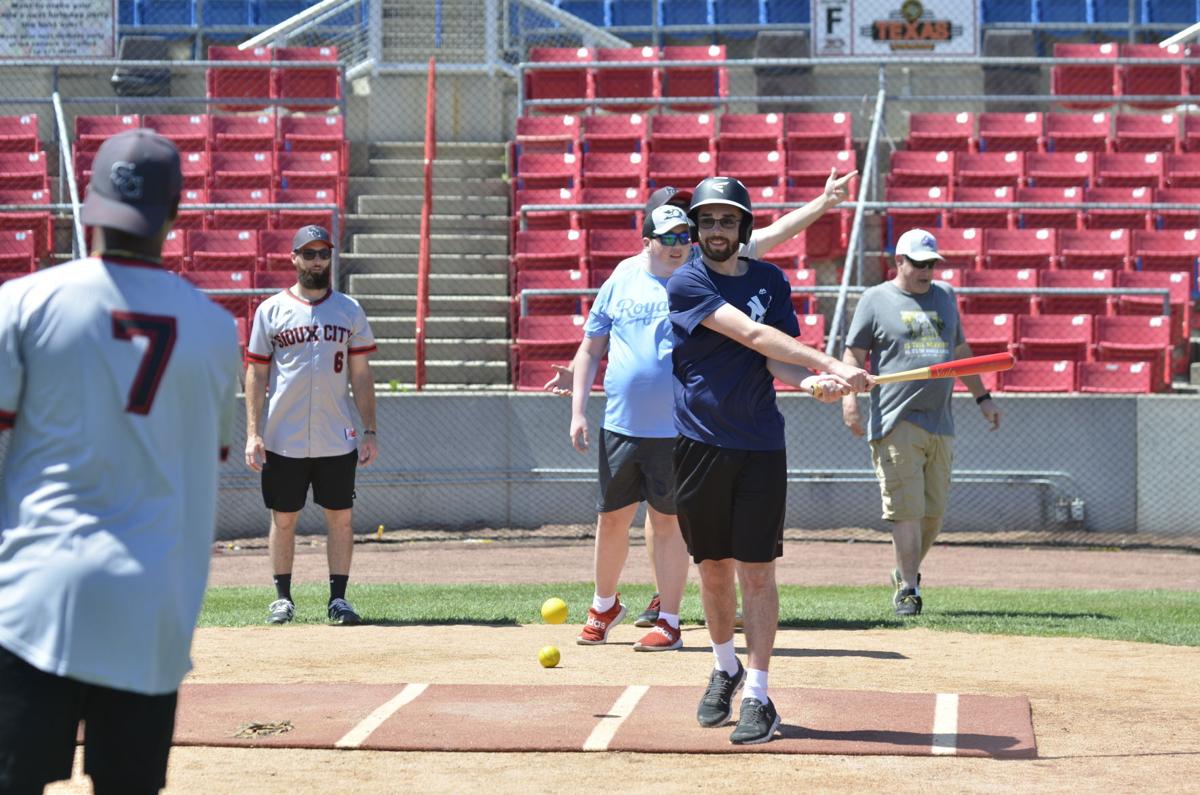 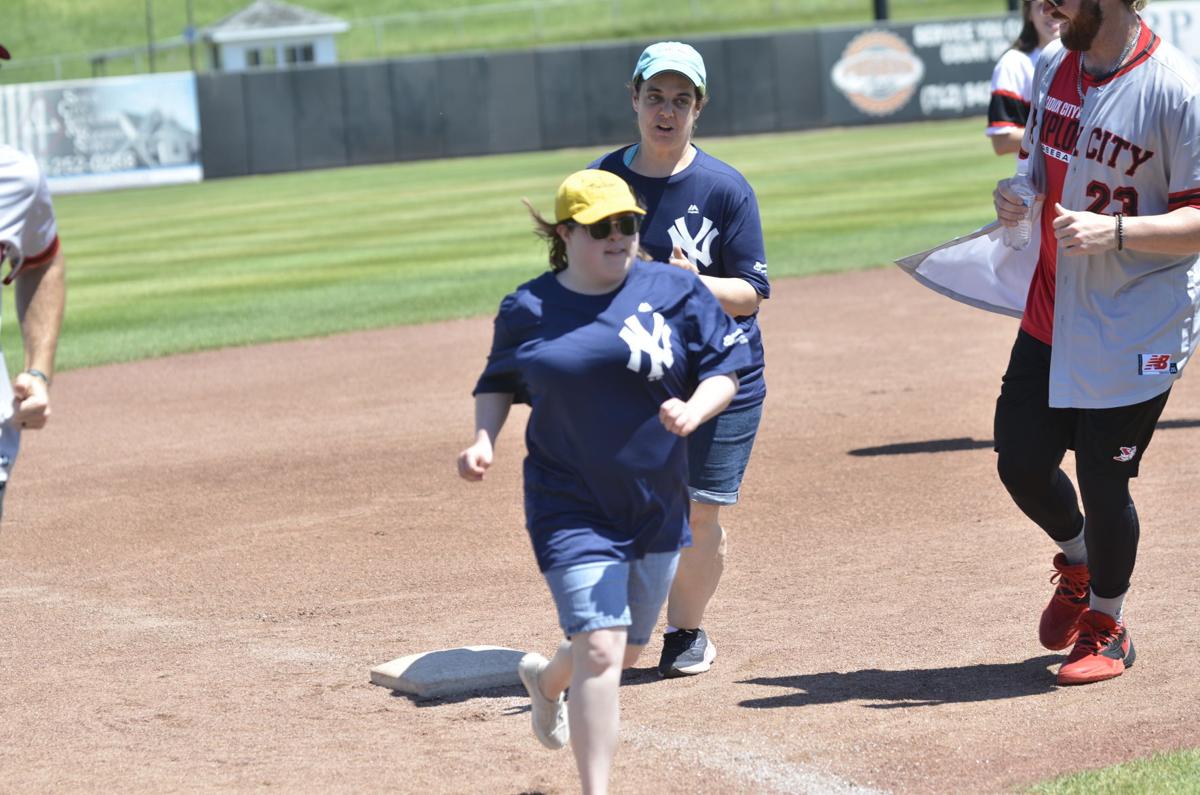 A Yankees player rounds third and heads for home on Saturday at Miracle League Day at Mercy Field.

It was Miracle League Day, an annual event where children and adults with disabilities get the opportunity to play baseball with the X’s players and coaching staff. It’s a day that brings smiles to the faces of nearly everyone involved, with Explorers manager Steve Montgomery calling it his “favorite day of the year.”

"Those kids and the smiles they have on their face, they think they are playing at Yankee Stadium," Montgomery said. "It's just awesome. You can't get enough of it."

The Miracle League of Sioux City is a nonprofit organization that gives people with disabilities opportunities to play baseball, with eight week seasons held in both the spring and fall.

The league has over 100 players, according to Executive Director Haley Meacham, and plays at the league's privately owned facility at Riverside Park, which also features mini golf, a splash pad, walking path, and baseball diamonds.

Once a year, the Miracle League brings its players to Mercy Field, where they get the chance to play with the X’s on a professional diamond.

The league was founded by Kevin Negaard in 2013, and the annual game at Mercy Field has been held each of the past six years, excluding 2020, due to COVID-19.

Shannon Gibson’s son Jess plays for the KC Royals Miracle League team. The Gibson family comes over from Wayne, Neb., every Sunday in the spring for Jess to play at Riverfront Park, but the game at Mercy Field is always the biggest day of the year.

“I can tell you that he didn’t sleep much last night, because he was so excited,” Gibson said. “My husband and I run half marathons, and that is a big thing for us. This is his half marathon. This is something he looks forward to, and he trains for it.”

For Gibson, the Miracle League is a blessing in many ways. The Riverside Park facility built to be accessible for people with disabilities, and with Jess in a wheelchair, she is grateful for the opportunities it provides him to partake in athletics.

“It’s neat to have something so accessible, so that he can be a part of that baseball team,” Gibson said. “He’s 21 now too, so he is aging out of a lot of activities, and Miracle League doesn’t age them out. They can play this forever.”

Meacham worked as a Miracle League buddy when she played softball at Morningside College, and was later hired by Negaard to the league's Executive Director. For her, the smiles of both the athletes and the parents are the job’s biggest reward.

“That is what we strive to do,” Meacham said. “We want the parents to come here and watch their players, and let them relax and enjoy their players playing the game that they’ve always wanted to play, and maybe weren't able to years ago. I just love that we have opportunities like this for individuals with disabilities, so that they can play as well.”

Sioux City Explorers pitcher Zach Hedges has been a part of Miracle League Days at some of the other stops in his baseball career, and says that the event is always special for everyone involved.

“It’s exciting and fun,” Hedges said. “We love it. They all have a smile on their face, and we just want it to be a fun day for them. It’s hard to not have a good day here.”

“This is a very fun thing for the players and all of us. We’re trying to just give any excitement that we can. We’re here for them today, which is the best part.”

For Montgomery, the event seems to serve as an annual reminder of why he loves the game of baseball.

“It’s great, because there is just a love of the game,” Montgomery said. “It doesn’t matter if you are four years old or twenty, when there is a love of the game. I’ve given almost my whole life to the game, and just seeing the passion that these kids have and the fun they have with it, it’s just a fun way for us to give back to the community.”

X's bats heat up in big win over Lincoln

Sioux City – After a six game road trip, the Sioux City Explorers were happy to be back home, as they won their first game of the series again…

ANKENY-- The Spirit Lake girls tennis team suffered a pair of losses on Saturday at the girls state team tournament in Ankeny. In the state se…

Back to back homers power X's to series win

SIOUX CITY - The Explorers won the second game of their series with Lincoln on Saturday, thanks to another big night from the bats. Some big s…

The Sheldon softball team crushed its competition on Saturday at its home tournament, winning all three of its games by a combined score of 17-0.

Interstate Amateur: Chalk one up for the old guys

DAKOTA DUNES – Forget about the Senior Division, Sam Prue stared down players of all ages and prevailed in the 87th Interstate Amateur at Two …

SIOUX CITY – On a windy Sunday afternoon, the Sioux City Explorers picked up their second three game sweep of the season after a long battle a…

Jess Gibson of Wayne, Neb., gets a fist bump from Explorers' player Nate Samson, as Shannon Gibson looks on.

A Yankees player rounds third and heads for home on Saturday at Miracle League Day at Mercy Field.