Subscribe
Read Today's E-Edition
Share This
A winning team: Deaf football star Demarico Young likes having Dawn Habhab on his side
0 Comments
Share this
Presented By

TNF: Scores and updates from Patriots vs. Bills 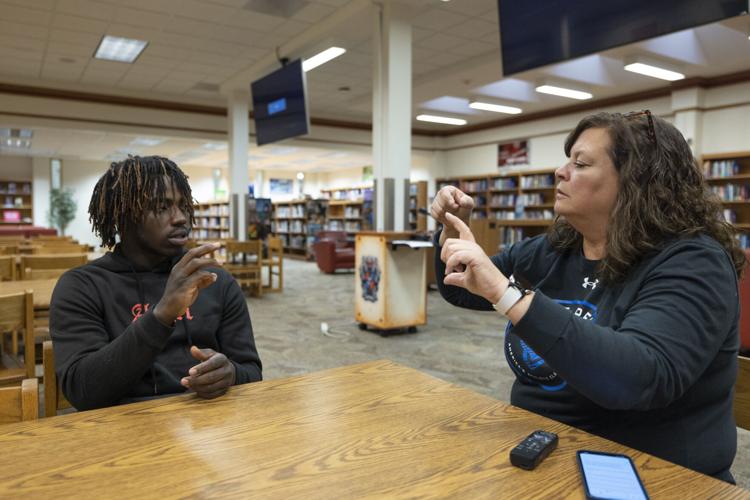 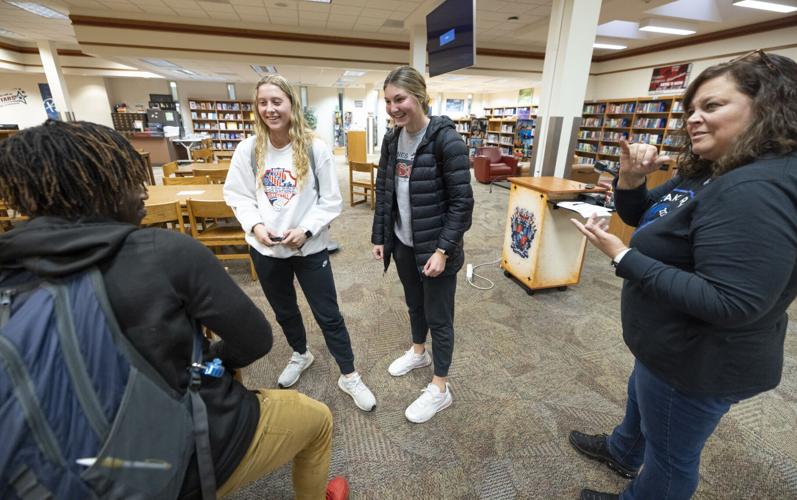 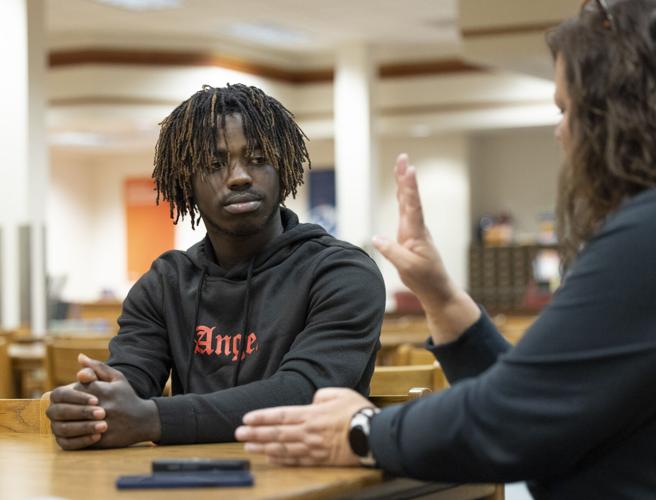 Demarico Young, a junior at Sioux City North High School, talks about his experience in school with interpreter Dawn Habhab. 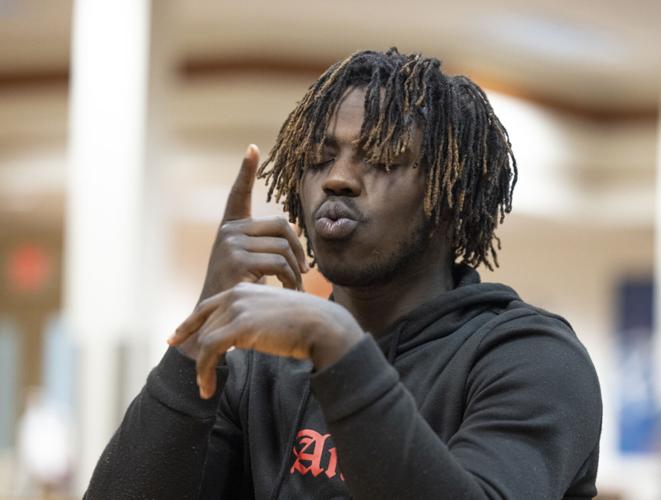 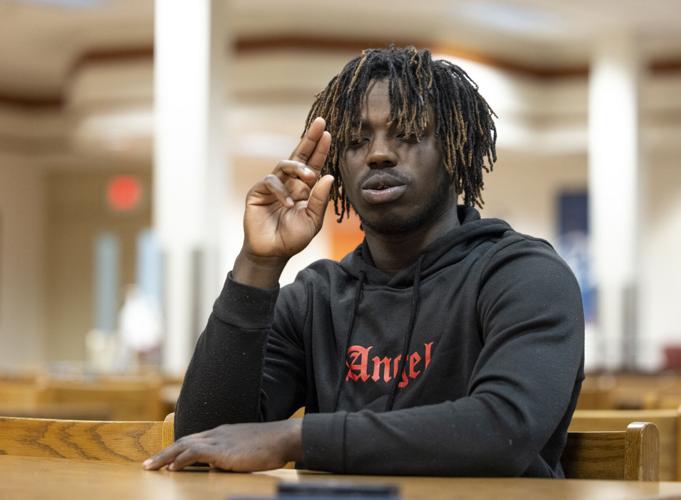 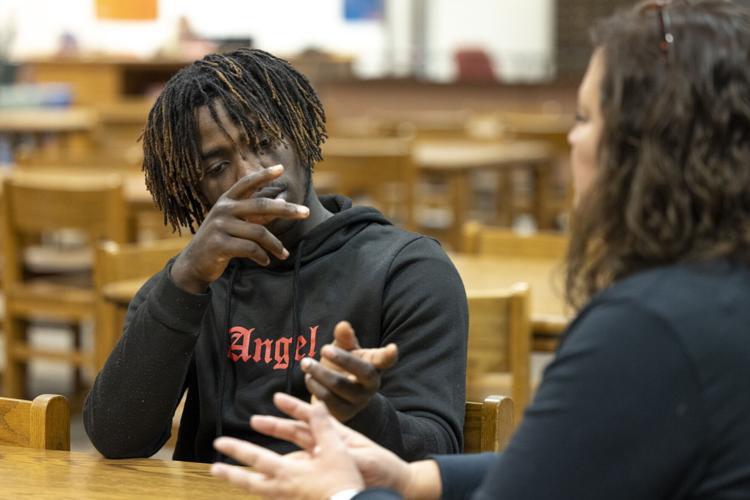 Demarico Young, a junior at Sioux City North High School, talks about his experience in school with the help of Dawn Habhab, right, who's with him throughout the school day. 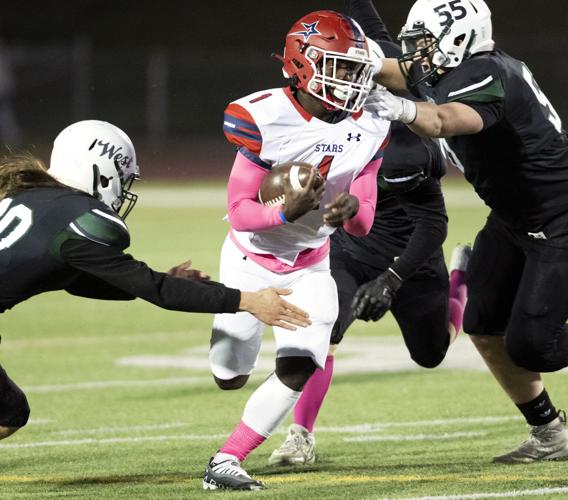 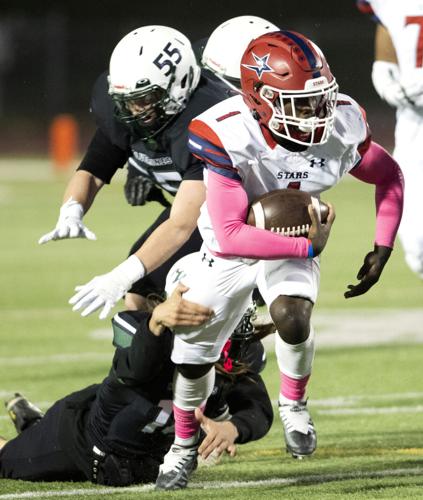 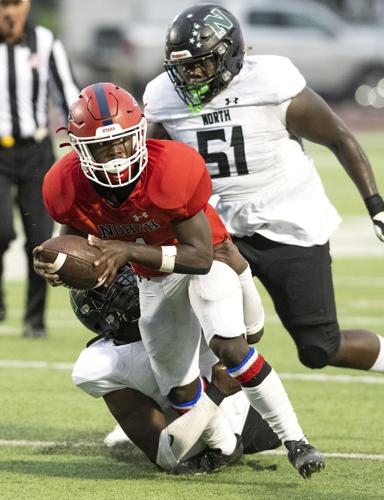 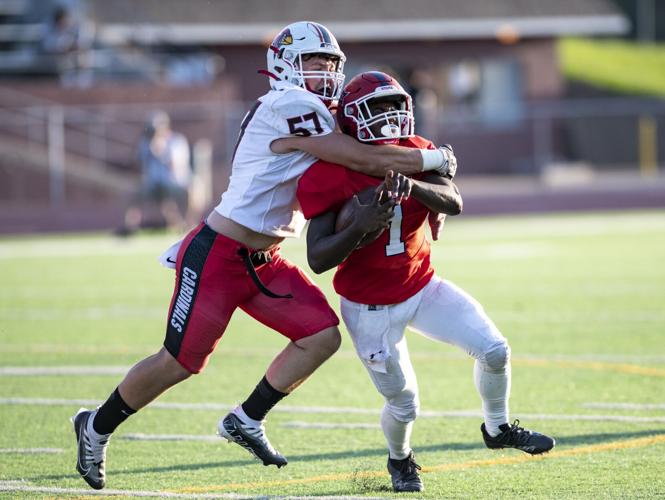 Dawn Habhab has the best seat at most North High School sporting events.

She’s been in the huddle at football games, at the starting line at track meets and, soon, on the mat at wrestling matches.

As interpreter for 17-year-old Demarico Young, who’s deaf, she’s just about everywhere he is, conveying messages from coaches, referees and, yes, fans.

“I have the best career on the planet,” Habhab says. With Young for two years, she accompanies him to classes, practices, games and dates. But she doesn’t interfere in his work or his life.

“Kids will see me in the hallway and they’re like, ‘Where’s Demarico?’ and I have to tell them, I’m not his babysitter.”

“She tries to tell me to be independent with my friends and enjoy myself, if I go out,” Young says. “She wants me to discover things on my own.”

Usually, their partnership ends when the school bell rings. But if there’s a game or another after-school activity, Habhab’s in play.

An away football game, for example, meant the two were together for most of a day.

“We had eight hours just in travel time, plus all day at school and, then, the game,” Habhab says. “We didn’t get back until 2:30 in the morning.”

The partnership, however, has paid off. Thanks to Habhab’s interpretation skills, Young broke the school record this year for most touchdowns in a season. He scored 18, breaking the previous high – 17 -- that was set in 1988 by Raul Sanchez, now a psychologist in Sioux City.

In the spring, he was part of North’s Distance Medley team that placed sixth in the Iowa Girls and Boys State Track Meet 4A division.

And, yes, Habhab was there, too.

“She was in the lane ahead of me,” Young explains. “She makes sure that the ref knows I’m deaf and that she’s close to the gun. I set up on the blocks and then I’ll look at Dawn and just wait.”

At the Drake Relays, Habhab was on the track, behind the runner in Lane Five. Young was in Lane Four “and he could just look right at me.”

Meeting other deaf athletes in Iowa is a treat, but rare. At a football game, an opposing athlete signed, “Good game.” “He was hearing but his brother and sister were deaf,” Young says.

Thanks to Young’s presence, students at North “are motivated to learn sign language,” Habhab says. “Some of them want an ASL class.”

This season, football teammates asked how to sign “brother.” They wanted to be able to call him that.

“I’m completely deaf – there’s nothing at all in my left ear. But I can hear vibrations and, if it’s really loud, some deep talking. If somebody yells something like, ‘Demarico,’ I might be able to pick up the ‘D.’ And, that’s pretty cool, too.”

While attending deaf school in his home state, Louisiana, Young was a cheerleader. “And we’d go by a drum beat…we could feel it, so we could stay on beat with our cheers.”

Cheering, though, is just one of many sports that have filled his 17 years. He also swam competitively and was involved in weightlifting. Add in basketball, wrestling, bowling, darts, golf and tennis and it’s easy to see he’s an athlete for all seasons.

Before he moved to the Midwest, Young went to a deaf school and that was comforting. He didn’t need an interpreter. He could speak freely with students and faculty.

His mother, however, wanted to get him out of Louisiana and away from family members who were involved in gangs and “made bad decisions.” They first came to South Sioux City, where he was paired with Habhab.

“Everything was new to him,” Habhab says. “The hearing world was just an oddity.”

Young excelled in athletics in South Sioux City but there was a disconnect (“I had support there, but there were some struggles”), which prompted him to look at other schools. He was courted by other Sioux City schools, but chose North because it could help him get closer to his goal – a college scholarship. “My current GPA is pretty good, but it’s not where I want it to be,” Young says. Currently, it hovers between a 3.5 and 4.0.

A girlfriend, Habhab says, is not in the picture. Not yet.

“I’d like to get a major in business and own a construction and welding company,” Young says. “There’s still time for a girlfriend and a family.”

A period when he and his family were homeless convinced him he won’t consider himself a success until he’s able to buy his mother a home.

Now, though, there’s the matter of getting through school and convincing Habhab she needs to go with him to college.

Already, she says, it’s fascinating to be in class and discover new ways that teachers instruct.

While Young says their relationship is more like that of parent and child, it’s easy to see how relaxed he is in her presence.

“Parents get really nervous and paranoid around me,” he admits. “I’m very direct. I’ll ask questions. I’m not afraid, so I just find a way.”

Habhab is his link to a world he didn’t know; Young is her window onto a period she thought was in her past.

“I’m not his friend,” she says. “But because of the hours that we’re together, I tend to know a lot more about him than a normal interpreter would.”

She also is a great asset to the school, says Chris Koch, assistant principal and activities director. “We are fortunate to have her. She has been a great addition to North High.”

And, Habhab’s sports knowledge has increased markedly. And if he’s game to try something new, she is, too.

Meet the Iowan and Broadway actor who's "Music Man" character is now memorialized next to the #ButterCow at the @IowaStateFair.

After graduating from Northwestern College, Vander Broek moved to Chicago. Then she went to Los Angeles. Then back to Chicago. And finally to New York, where her role in "Linda Vista" gave Vander Broek her first Broadway credit and a Tony nomination.

Study: Caffeine can improve the performance of sprint runners

Study: Caffeine can improve the performance of sprint runners

How the World Cup ball may change soccer forever

How the World Cup ball may change soccer forever

Demarico Young, a junior at Sioux City North High School, talks about his experience in school with interpreter Dawn Habhab.

Demarico Young, a junior at Sioux City North High School, talks about his experience in school with the help of Dawn Habhab, right, who's with him throughout the school day.