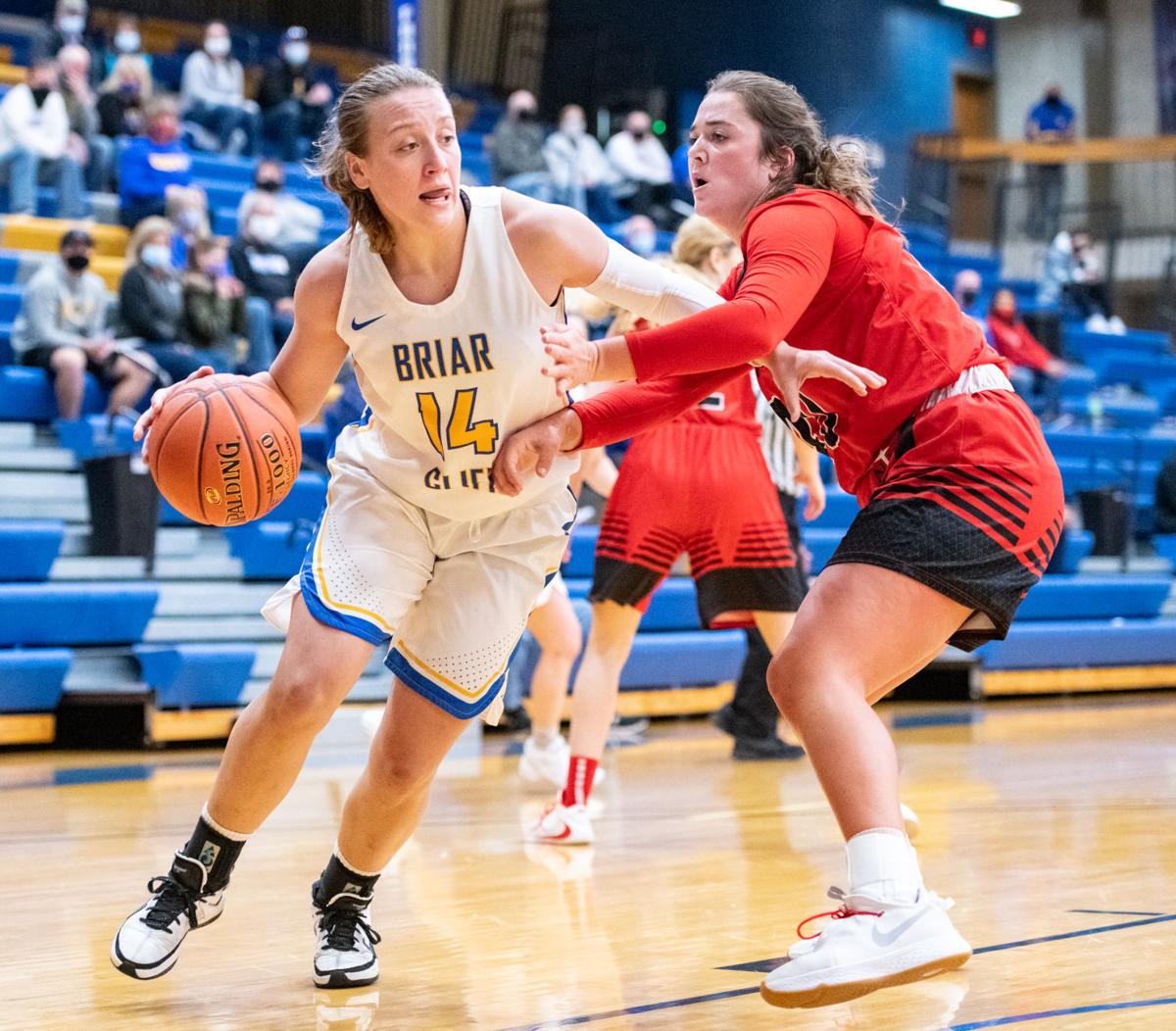 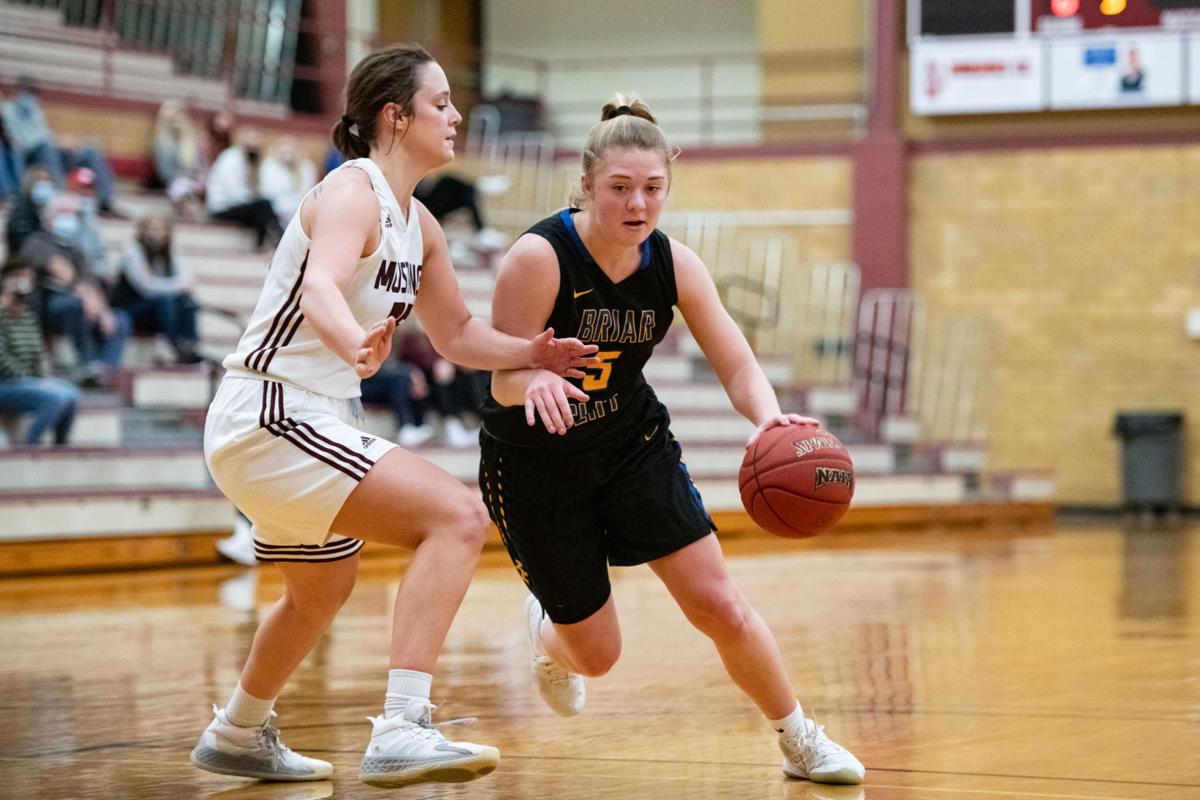 Briar Cliff's Konnor Sudmann dribbles toward the basket as Morningside's Sophia Peppers defends her during Morningside vs Briar Cliff basketball action on Jan. 13 at the Rosen-Verdoorn Sports Center in Sioux City.

SIOUX CITY — The Briar Cliff University women’s basketball team is eager to make an adjustment that is being implemented nationwide.

The 3-point line has been moved back to the men’s basketball line, which is 22 feet, 1 3/4 inches. That rule was approved during the off season, and many schools, including Briar Cliff, had to re-paint their basketball courts so that there was one 3-point line.

Briar Cliff worked on redoing its basketball court over the last couple weeks, and the paint was dry enough for the Chargers to practice on it on Monday.

The players — including Konnor Sudmann — admitted that shooting from the old men’s line felt a little odd, but at practice on Monday, seeing that one arched line made it feel official.

And, it may help the Chargers’ offense.

Chargers coach Brita Hand said that she’d like to see her team shoot better from the 3-point area.

“Getting in here and working from the line is all we can do,” Sudmann said. “I think it’ll impact both offense and defense. Offensively, it’ll help us spread the floor a little bit more. Maybe if our shots aren’t falling from the new line, maybe we’ll get the ball inside a little bit more.”

Kennedy Benne had the highest percentage at 38 percent, as she made 30 of 79.

She said that there will be more space to work with and thus, there will be wider gaps. That might allow her to make some touches in the paint.

“I think you just have to stay aggressive and looking for those openings,” Deitchler said. “Defensively, obviously, you switch that around, and there will be a lot more gaps. You can feel the gaps and how much easier it is for their person to defend and head for the lane. We need to get that help right away.”

Sudmann and Slaughter are among the starting five who are all coming back. The starting five lineup in the Chargers’ last game at Morningside in the GPAC Tournament — Sudmann, Slaughter, Kennedy Benne, Madelyn Deitchler and Josie Condon — all return for the 2021-22 season.

The Chargers produced their most successful season since the 2015-16 in Hand’s first season as Chargers’ head coach.

BCU went 17-10 overall, and it won 14 games in the GPAC, including a buzzer-beating win in the middle of the season over Morningside. The Chargers won thanks to a last-second, second-chance spot from Slaughter.

“Any time you see some success and excitement around the program, you want to build on that,” Hand said. “There have to be a lot of little things for us that have to go right to have the success we had last year. We talk about a lot of things have to go right through March.”

The Chargers return their Top 7 scorers. Deitchler led with 381 points — 14.1 points a game — on the season, while Sudmann — 14.6 ppg — was right behind her teammate by two points.

“I think we’re picking up and moving forward to where we were last year,” Sudmann said. “We’re expected to know stuff right away, with a lot of us who aren’t new. Seeing the teams ahead of us that finished ahead of us all went to the national tournament gives us that glimmer of hope that we can do that, too.”

Sudmann was on the GPAC’s first-team all-conference, while Deitchler made the second-team. Both ladies were Top 10 scorers in the GPAC.

“It’s definitely exciting for us to be having so many scorers returning,” Hand said. “We have some newer kids who we’re looking to be contributors.

The Chargers open up the season next Friday with a 5:30 p.m. game against Dakota State.

Briar Cliff's Konnor Sudmann dribbles toward the basket as Morningside's Sophia Peppers defends her during Morningside vs Briar Cliff basketball action on Jan. 13 at the Rosen-Verdoorn Sports Center in Sioux City.