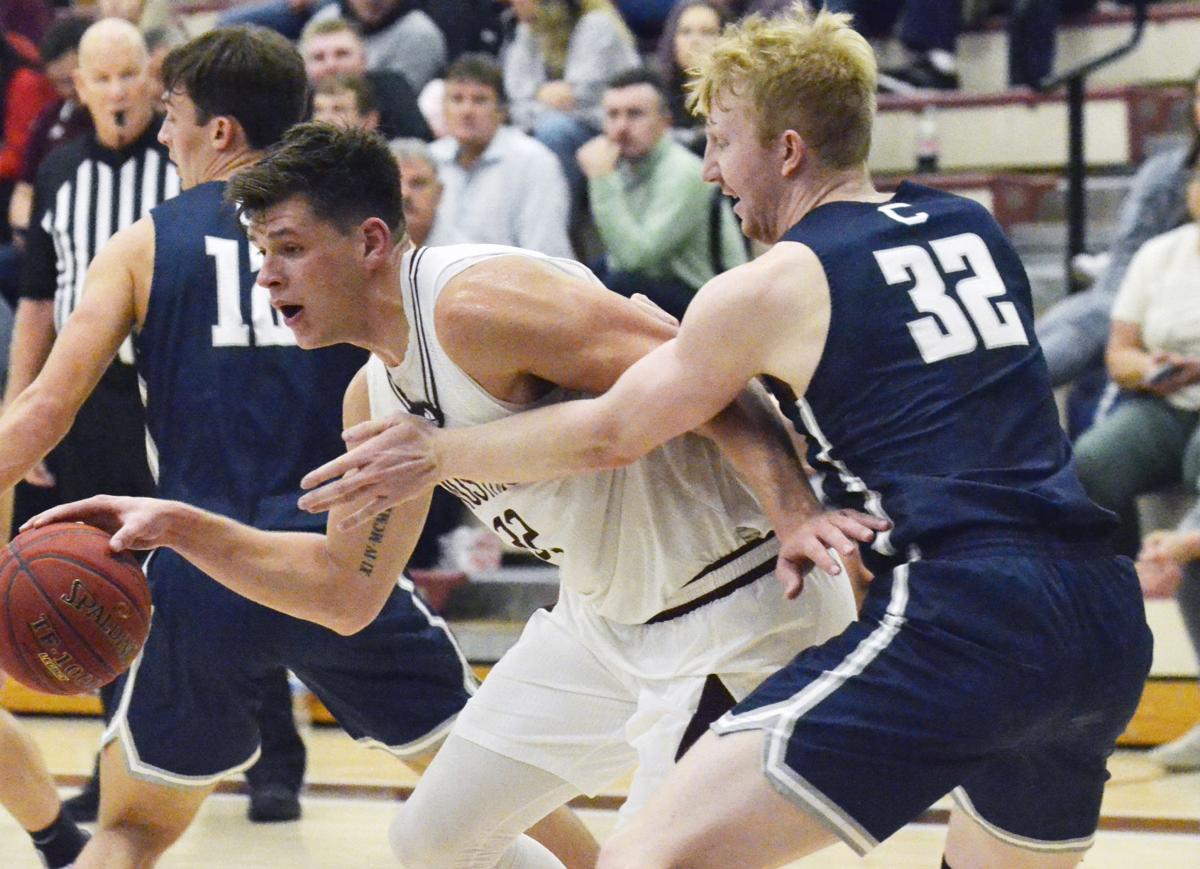 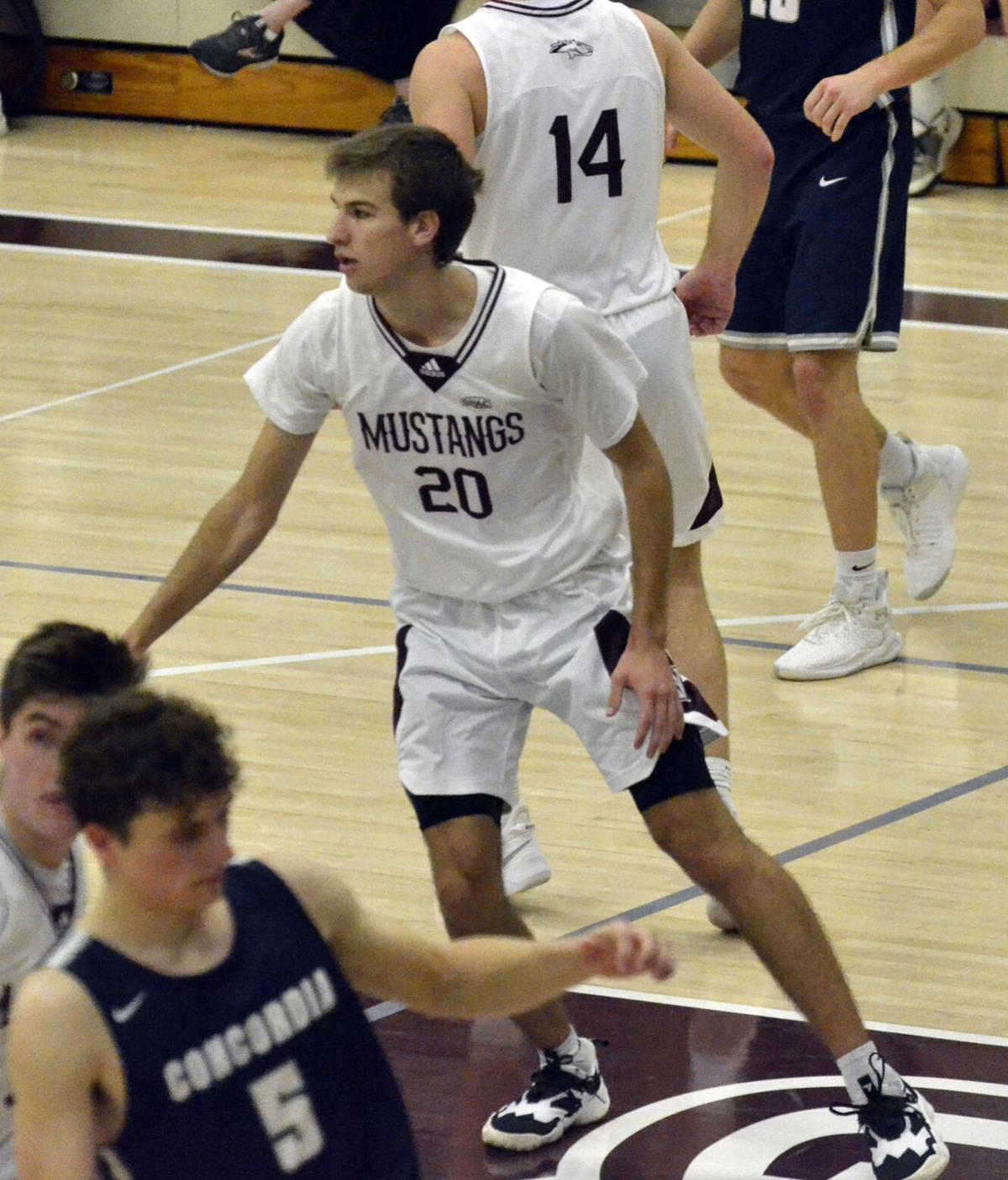 SIOUX CITY — Joey Skoff walked up to the free-throw line four times in the last 90 seconds like it was second nature.

As it turned out, it wasn’t the first time the Morningside University men’s basketball sophomore found himself in a late-game situation.

Skoff hit all four of those free throws — and Trey Brown hit a late-game bucket in the paint — that helped Morningside beat Concordia 79-77 Wednesday in Allee Gymnasium.

“We shoot 1-and-1s every day in practice, so I’m used to it,” Skoff said. “If you practice them, they’ll come to you in a game and you don’t have to think about it. Just put it in. I’d say that’s the biggest game I’ve ever been in, yeah.

“I see we have a few guys struggling and I saw we were down, I had to get in there and do what I could for the team.”

Last year, Skoff had five straight plays called on him during a game against Briar Cliff, and that proved to be a big stretch for the Mustangs.

Skoff said that he enjoyed Wednesday’s experience better, knowing that his plays came late in the game.

“This one is a lot better,” Skoff said.

When Skoff was playing at the high school level at Bellevue East, he made three free throws late in a game against Gretna that wound up being the difference.

Not only does Skoff remember it well, but so does Mustangs sophomore Ely Doble. Doble was playing for Gretna, Nebraska, that night.

Doble ended up fouling Skoff while Skoff was shooting a 3, and that sent Skoff to the line where he eventually converted on all three free throws.

Miller was in the building recruiting Skoff, and he saw Skoff make those three late free throws.

“I watched Joey knock those three down, and I remember thinking, ‘For a high school kid to do that is pretty impressive.’ The guy has always been able to make plays,” Miller said. “It reaffirmed that’s the type of guys we need.”

Miller said that Skoff struggled getting into a rhythm early, but the first-year Mustangs head coach relied on the kid he saw hit clutch free throws in the past.

Skoff’s biggest strength is driving to the basket, and that’s how he got to the free-throw line so of

ten late in the game.

He first visited the line with 1 minute, 49 seconds left in the game, as the Mustangs were down 74-71.

Skoff made both free throws, bringing the Mustangs to within one point.

Carter Kent made a 3-pointer to bring the Bulldogs back up four points with 97 seconds lft.

On Morningside’s next possession, Skoff attacked the paint and even though there was some contact, he made the basket.

The Mustangs made a stop and again, Skoff drove down and Klay Uher fouled the Mustangs sophomore.

Skoff made the first free throw in a double-bonus situation.

Then, the Bulldogs called timeout.

Skoff came out of the timeout, and swished the second one. That tied the game at 77-77.

“That’s a huge deal,” Miller said. “If you look at the box score, we didn’t make a whole lot of free throws (10-for-16) prior to that. That’s just a testament to (Skoff’s) preparation. He’s always been cool under pressure.”

Concordia made a big comeback, as the Bulldogs were down by as many as 12 earlier in the half, which allowed Skoff to be Morningside’s player of the game.

Skoff isn’t the No. 1 option for the Mustangs, but Brown is certainly at the top of the list.

He wanted the ball in the final possession of the game.

“Pottebaum threw the ball to me, and I put the ball into the basket,” said Brown, who led with 20 points. “It’s not about me, it’s about this team. They trusted me to get the ball, and I had to put it in.

“I don’t get that shot without (Skoff’s) four free throws.”

Brown set a down screen, and that allowed him to post up on the right block with about seven seconds left on the clock.

Will Pottebaum fed Brown around the short-corner area on the right hand side of the court. Brown wasn’t bothered by getting the ball out that far.

Uher was on Brown at the time, and Brown knew he had the advantage.

He took two dribbles, spun into Concordia traffic, and took about a six-foot shot over Gage Smith.

Oh, and Brown shot a fadeaway to avoid any further traffic.

The ball hit the front of the rim, and curled through the nylon to give Morningside a 79-77 lead with 2.8 seconds left.

Brown wasn’t on the floor when Concordia had the ball last, following a couple timeouts.

Smith got an open look from about 32 feet out, and the ball hit the glass, but it didn’t go through the basket.