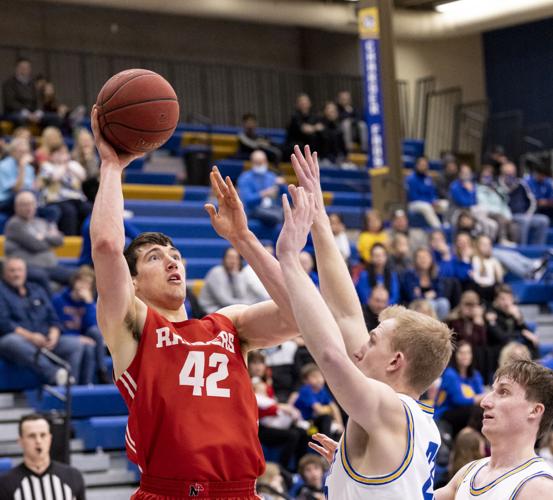 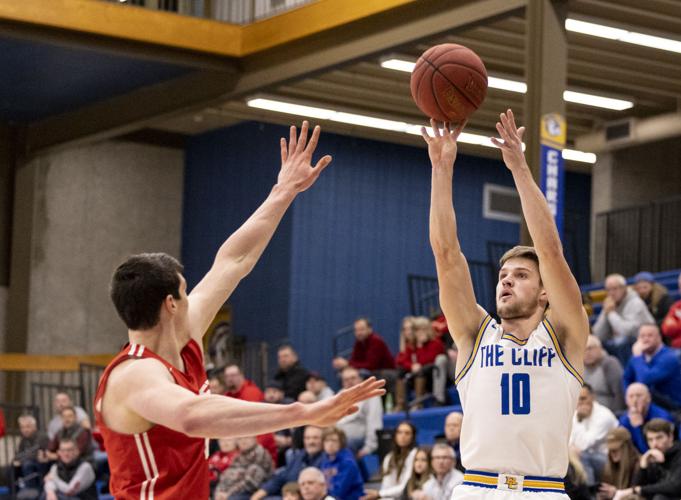 ORANGE CITY, Iowa — For Alex Van Kalsbeek, there is no such thing as a sophomore slump.

On Saturday night at Bultman Center, the 6-foot-6 inch Northwestern College sophomore had the game of his life in a 92-77 Red Raiders basketball victory over GPAC rival Concordia.

Van Kalsbeek scored a career-high 35 points for the Raiders on 14-of-19 shooting, with seven free throws.

Van Kalsbeek, a MOC-Floyd Valley grad who was named the GPAC Freshman of the Year and honorable mention All-American a season ago after leading the conference in shooting percentage, said that a second-year regression was never something that he thought possible.

“If you saw him work in the weight room all offseason and work in the gym all season, you wouldn’t be thinking there is going to be a sophomore slump,” Northwestern head coach Kris Korver said. “He puts in the work. That’s the fun thing, he’s a great teammate, he’s really humble, he’s always thanking his teammates and thanking his coaches. That humility is pretty awesome.”

Alex is just the latest in a line of Van Kalsbeeks that have called Northwestern home. His older brothers, Daniel and Justin, also played for the Raiders under Korver, with Justin winning the GPAC freshman of the year award in 2013, and Justin graduating in 2017.

For the “little” Van Kalsbeek brother, there was never any doubt that Northwestern was where he wanted to be.

“Before last year, I wanted to come here because I had a connection already with my brothers coming here,” Van Kalsbeek said. “I knew that I could easily get along with the coaches, and my teammates, we have a special group. The connection is strong, and we have fun.”

On Saturday, that connection could be seen from the opening tip-off. At halftime, Van Kalsbeek had 16 points on 8-of-13 shooting, and then added 19 more points in the second half to boost the Red Raiders to the win.

At one point in the fourth quarter, Van Kalsbeek put down a booming dunk that led to cheers of appreciation from the Northwestern crowd. His 35 points gives him a team-high 505 on the season, and he also leads the squad with 199 rebounds.

“Our guys just did a great job getting him the ball in places where he could be successful,” Korver said. “Every team in our league tries to guard him differently. Tonight, Alex just did a great job recognizing what they were doing, and then playing like an All-American.”

Northwestern’s offense got off to a hot start in Saturday’s game, as the Red Raiders shot 53 percent from the field in the first half, to go into the break with a 46-41 lead.

The Raiders were even better in the second half, with a 71.4 percent shooting mark, while the Bulldogs could manage only 38.7 percent.

For the game, Northwestern shot 59.6 percent, while Concordia shot 41.4 from the field.

Along with Van Kalsbeek, the Raiders got big games from Trent Hilbrands, who had 19 points, Matt Onken, who had 16, and Grant DeMeulenaere, with 12.

Concordia’s leading scorer was Carter Kent, who put up 19 points, while Noah Schutte and Gage Smith were close behind with 17 and 16 points apiece.

The Red Raiders also won the rebounding battle against the Bulldogs, 34-30.

For Van Kalsbeek, a big game like Saturday can feel pretty easy. You don’t have to think too much when you are on top of the world.

“It’s just a flow,” Van Kalsbeek said. “I’m just having fun. It’s fun to be out there with my teammates, I know they want to give me the ball, and I want to give them the ball too. I just have fun out there.”

The win gives the Raiders a 9-4 record in GPAC play, a half game back of Concordia in the conference standings. This week, the Raiders will travel to Sioux City for a Wednesday night game against arch-rival Morningside.

“It’s one game,” Korver said. “The bottom line is that this league is really difficult, you can get beat by anybody in this league. Concordia is one of the better teams in the league, and I think they’re going to be there at the end of the year. We’re grateful we got it, we’re going to celebrate it tonight, and then tomorrow we’re going to get back to work.”

Get 5 months of a Courier digital subscription for just $5 at https://go.wcfcourier.com/nov5

Northwestern's Rotert leaning on upperclassmen in first season as coach

Walding, one of the first two SB-L wrestlers to wrestle at the girls state tournament, started the day with a win by fall in 1 minute, 59 seconds, over Abby Dorn of Clarion-Goldfield-Dows, and then followed it with a 30 second pin over Mount Vernon's Claire Gaffney.

Last month, Natalie Nielsen surpassed 1,000 career points in a win over Harley-Melvin-Sanborn, a night where she also collected 10 rebounds for her sixth double-double of the season. Next year, she'll head to Brookings to play for SDSU.

On Thursday night at Elk Point-Jefferson High School, the visiting Akron-Westfield High School girls basketball team earned a solid road victory, as a quartet of Westerners led the way in a 55-46 win over the Huskies.

The Morningside Mustangs went on an 8-0 run in the middle of the third quarter that helped them beat Northwestern 81-63 on Wednesday night inside the Allee Gymnasium.

On Friday night at Tyson Events Center, Sioux City forward Owen McLaughlin put up the latest in a run of outstanding performances on the ice, scoring three goals and adding an assist for the Muskies in a 7-4 win over Sioux Falls (11-21).

Tom Brady will become analyst for Fox Sports upon retirement

Tom Brady will become analyst for Fox Sports upon retirement