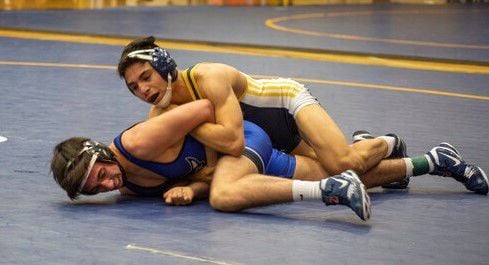 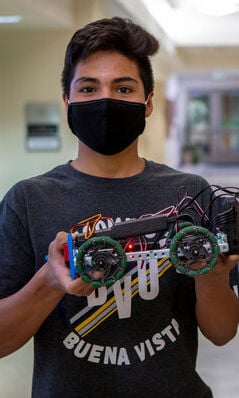 Axel Hernandez shows off a “sumo-bot” he helped create for a Robotics Club competition at BVU.

TIM GALLAGHER Special to the Journal

Hernandez is at BVU to read, to wrestle, to tinker in Robotics Club, and to serve others, assembling hygiene care kits for the elderly in and around Storm Lake, for example.

He’s at BVU to earn a degree in physics, the next step in becoming an electrical engineer, a goal since his prep days at Dumas High School in Dumas, Tex., where the son of Gabriela Sanchez excelled in the classroom and on the mat, a state champion who fashioned a 3.97 GPA as a senior.

“My mom is a single mom,” Hernandez said. “My older brother wanted to go to college, but he went to work in a cheese factory instead, same place my mom works. They supported our family. They, and my grandparents, encouraged me to attend college and get into a career where I could support myself. That’s why I am here.”

His “here” on another day is inside BVU’s Siebens Forum, where the Vice President of Student MOVE (Mobilizing Outreach & Volunteer Efforts) spreads awareness about blindness, deafness, and aging.

Later, that “here” is the Fritcher Fitness Center inside Siebens Fieldhouse, where Hernandez pushes himself on free weights, adding muscle to support technical instruction he receives from Mark Rial and Sean White, BVU’s wrestling coaches.

“I’ve gotten stronger, and I’ve improved from a technical standpoint,” Hernandez said. “Plus, I like being part of the team.”

Axel Hernandez began wrestling in fifth grade, the year he returned from a four-year stay across the U.S. southern border in Mexico, where his mother was born and raised. Going from Mexico to Texas at that stage represented a setback as Hernandez transitioned from Spanish classroom instruction to classroom instruction in English.

“School was difficult for me,” he said. “Spanish was used in our home, and I knew both languages. I just didn’t know as much as the other kids.”

He began wrestling in fifth grade, gave up the sport as a sixth-grader, and rejoined the wrestling squad in eighth grade. By his junior year at Dumas High, Hernandez was a force, claiming third place in the Texas University Interscholastic League state tourney. As a senior, he won 46 matches while claiming the Texas UIL title.

When a recruiter directed Hernandez toward BVU and Rial and White, Hernandez reached out. He considered attending a community college near Dumas, but wanted to continue wrestling as he enjoys the sport and what it returns to him in the way of setting and meeting goals. And while BVU, a member of the NCAA Division III classification, doesn’t provide athletic scholarships, the University offered a robust academic and financial aid scholarship package that made it affordable should Hernandez become a Beaver.

Despite his mother’s initial misgivings involving a 700-mile trek to Storm Lake, Hernandez drove north to this lakeside campus, where he’s found his home as a BVU student-athlete and a leader in civic engagement.

“Coming from a small town in Texas, I didn’t realize how many opportunities there were for me out in this world,” he said. “I’ve met people from all over at BVU and it’s helped me gain a perspective.”

He mentions junior Nikki Schuppan, a soccer player, as a positive influence. Schuppan, a secondary math education major and one of 35 tutors who work with their peers in BVU’s new Center for Academic Excellence, helped Hernandez understand the intricacies of Calculus I and Calculus II.

“I had Pre-Calculus in high school and thought I could get by on my own in Calculus my first semester here,” he said. “I learned quickly that you must realize the resources made available to you. I’m glad I did. The one-on-one approach with Nikki really helped me break things down.”

Hernandez, the first in his family to attend college, currently examines internship opportunities at power companies in his native state, working to mine personal connections while adding to his knowledge base on a breadth of topics, from robotics to coding to King Arthur.

He earned Academic All-American Rivers Conference honors as a wrestler during the Fall Semester, a time in which he took a pair of classes, computer science and discrete structures, from BVU Professor of Computer Science Dr. Jason Shepherd, a 1999 BVU graduate who, like Hernandez, wrestled for the Beavers.

“Axel is everything you’d want in a student-athlete,” Rial said. “The way he works in the wrestling room, in the classroom, and across campus is exactly what we seek in our BVU wrestling program and the student-body in general. Axel is growing while making others around him better.”

Compliments like that sink in as a Texan scans the Iowa sky on a return ride home, frustrated by the outcome—not the effort—involved in a one-point loss at the buzzer in Waverly. Hernandez, who enjoys the ride and the hard work, vows he’ll keep working on the mat to reward his coaches, his older brother, and his mother for their belief in him.

He’ll do the same in class, growing one step closer to a career as an electrical engineer. With that thought in mind, his head dips and returns to “The Romance of Arthur.”

Translation: “Keep going with your studies. We’re proud of you.”

SOUTH SIOUX CITY — Will Bolt hoped to be someplace else on Wednesday.

SIOUX CITY – It’s time to tip the mortar board to John Reynders, who will retire June 30, 2022, as president at Morningside College, which off…

In a typical year, the College World Series would boast opening ceremonies, fireworks, autograph sessions and open practices. But this is not a typical year.

AMES, Iowa — Iowa State football doesn’t have many unknowns heading into the 2021 season.

Mathematically, Will Bolt knew Nebraska had a chance to win a Big Ten championship before leaving Bloomington, Indiana, this weekend.

Dozens of former Michigan football players and other students who say they were sexually assaulted by Dr. Robert Anderson will hold a news conference outside Michigan Stadium on Wednesday morning to demand action from the school's leadership.

When you build a house on a crooked foundation, the renovations ar e destined to be more difficult. And not always sensible, especially if the architect is worried more about the design than the residents. So it is, again, with this latest fix that’s planned for the College Football Playoff, an expansion that’s long overdue — and surprisingly functional, if we're being honest — but certainly ...

Husker seniors near 'end of our road,' but there's more baseball to be played

There will be closure this time.

SOUTH SIOUX CITY — Will Bolt is coming to the Siouxland.

At one point during his college football days, Jon Vaughn was told by the team doctor that he needed his sperm for research purposes.

Axel Hernandez shows off a “sumo-bot” he helped create for a Robotics Club competition at BVU.