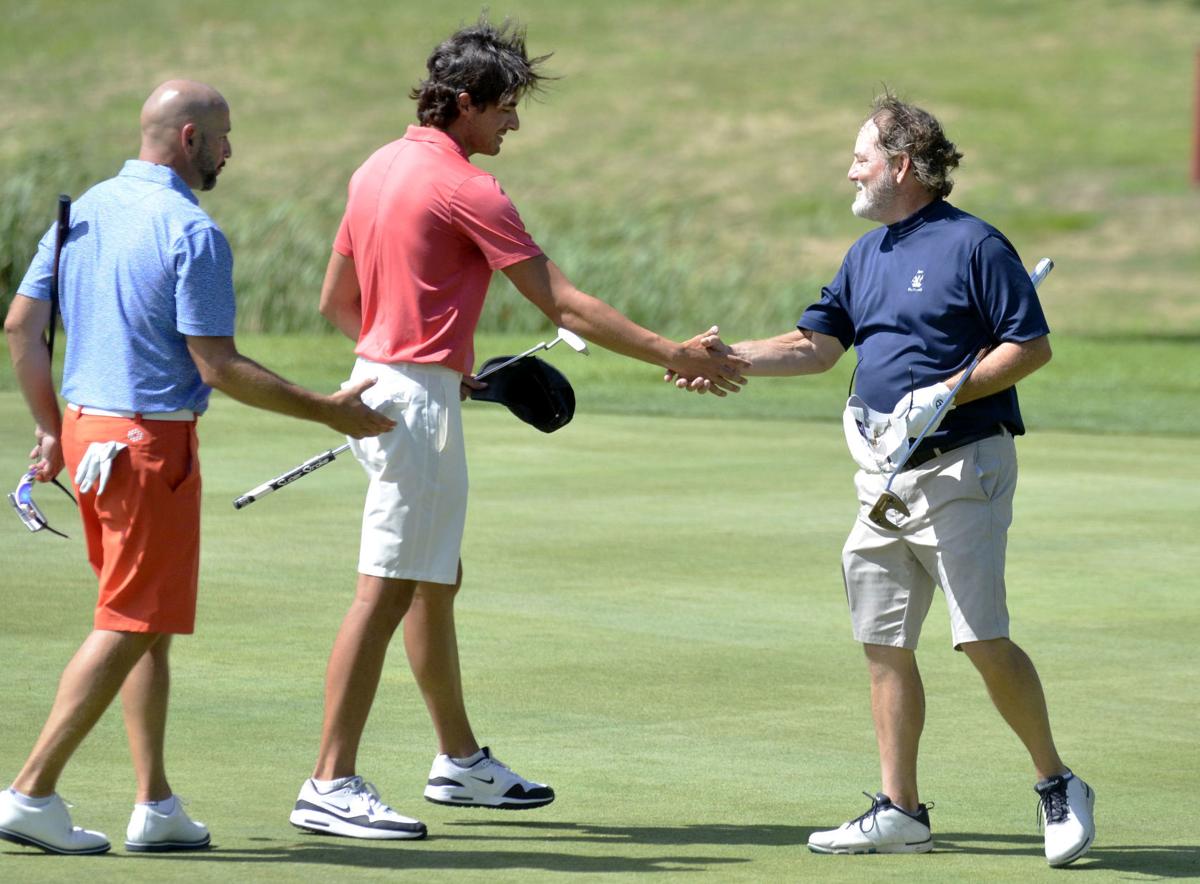 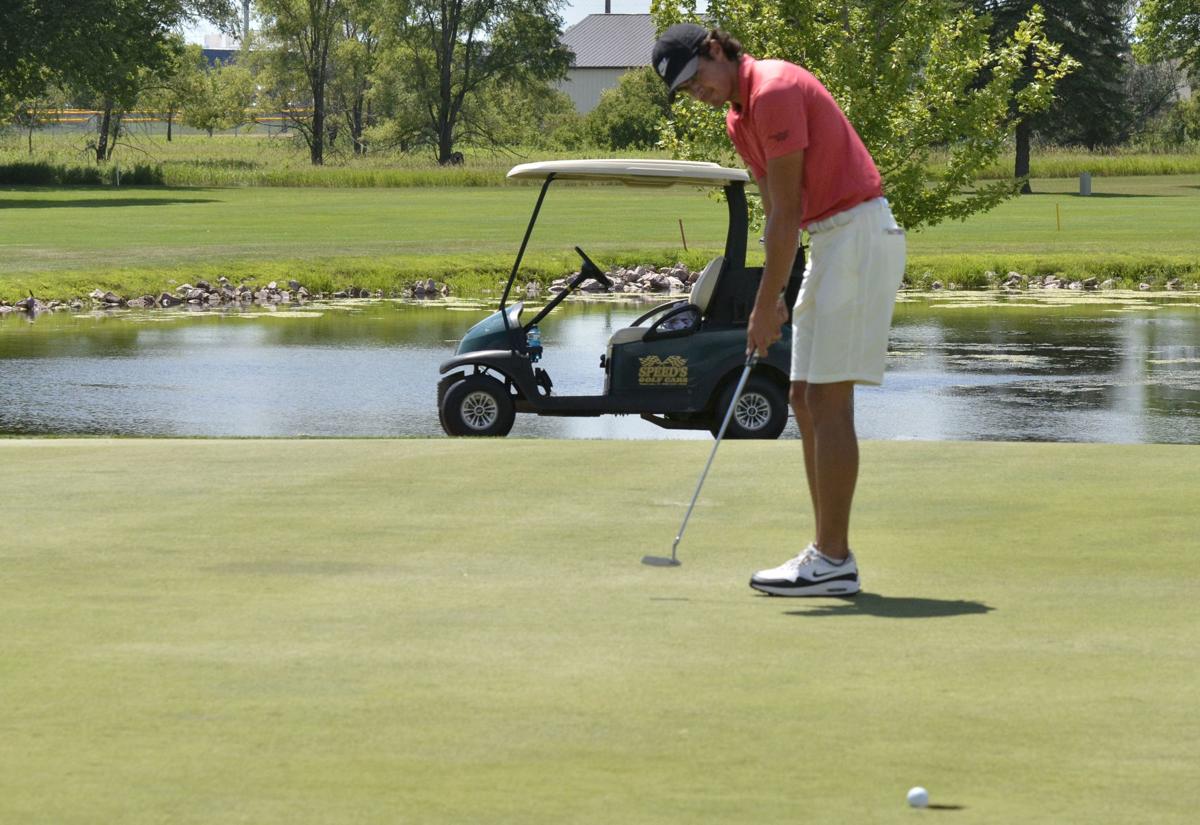 Corey Matthey makes a birdie putt during the final nine holes of the River-Cade Amateur on Sunday at Green Valley Golf Course. Matthey won the River-Cade title, the second one of his career.

Todd Sapp watches his putt during one of the final nine holes of the River-Cade Amateur Open on Sunday at Green Valley Golf Course.

SIOUX CITY -- The novelty of competing for a victory with his coach didn’t faze Corey Matthey on Sunday.

The Morningside College senior cruised to a nine-shot win in the River-Cade Amateur at Green Valley Golf Club.

In a unique final grouping, Matthey was paired with Morningside golf coach Todd Sapp. Matthey had a three-shot lead heading into Sunday’s final round and increased that to four before firing a scorching 32 over the last nine holes.

The 59-year-old Sapp, who seemed to re-discover his game this weekend, had a chance to cut into the lead midway through the final nine.

Matthey, though, curled in a 15-foot birdie after Sapp had stuffed his approach to about four feet on No. 4. He then rolled in a 30-foot bomb for another birdie on the par-3 fifth.

Another birdie followed on the par-5 sixth, where Sapp went into the water on his second shot and made double bogey.

After his only blemish, a three-putt bogey on the par-3 seventh, Matthey sealed his fifth Sioux City ‘major’ triumph with a 12-foot birdie putt on No. 9.

“I feel like I’m right there in most of these majors and obviously I want to win as much as I can,” Matthey said. “I felt my game has been trending on the upward direction since the Tri-State (in May). I had a little bit of a lead going into today. I didn’t really know what coach would shoot and I just wanted to keep playing my own game.”

“The first 18 today was a little sloppy, I had a couple water balls on 2 and 10, but other than that it was good enough,” Matthey said. “It was good to have a lead because I know coach is a grinder and he can get it rolling. The final nine I just wanted to play clean. I had only one blemish on the card, a double on 2 today. I had one bad swing but other than that I played 44 good holes.”

Sapp, a three-time River-Cade winner, finished a distant second but left knowing he can still compete with much younger opponents.

“Corey is a worthy champion, he is tough to go catch,” Sapp said. “It’s been a long time for me and I’ve got some more work to do, but things are looking better.

“Coaching him for four years, I fully expected Corey to do whatever he was doing out there because he’s done that for Morningside. I’m proud of him, he’s a great kid.”

Matthey said there was no added pressure playing with Sapp.

“It was a little harder because coach and I are so close, we’ve traveled together and gone to nationals,” Matthey said. “But at the end of the day I’m a competitor, I want to win just as much as I know he does. It was all light-hearted and probably a blessing because I felt even more comfortable than I normally do when I play.”

Matthey, who increased his lead in the Sioux City Journal Siouxland Player of the Year points race, will defend his title at the 107th Men’s City on August 8-9 at Green Valley.

IOWA CITY, Iowa -- Accusations of racial inequities within the football program he leads and candid conversations with former players have pro…

The NAIA Council of Presidents voted Tuesday to postpone the championships for women's volleyball, cross country, men's soccer and women's soccer to spring of 2021.

Luka Garza pretty much knew this was what he was going to do all along.

SIOUX CITY – In this ever-changing world in which we’re now trying to cope with, a couple of changes will be taking place on the local golf scene.

AMES, Iowa -- College football schedules have been in flux since the Big 10 was the first conference to announce a conference-only schedule am…

Nebraska presses forward with plans of having fans at football games

LINCOLN, Neb. — Nebraska continues to move forward with plans in hopes of hosting fans at sporting events this fall.

Corey Matthey makes a birdie putt during the final nine holes of the River-Cade Amateur on Sunday at Green Valley Golf Course. Matthey won the River-Cade title, the second one of his career.

Todd Sapp watches his putt during one of the final nine holes of the River-Cade Amateur Open on Sunday at Green Valley Golf Course.