Movie critic Bruce Miller says “A Quiet Place Part II” begs to be seen in a theater where sound effects resonate. Director John Krasinski plays the same sound games he did in the first installment but edits this one with a sharper eye toward tension. As a result, the sequel zips by, making t…

SIOUX CENTER, Iowa — What do an Olympic volleyball player, an NBA champion, and a former NFL quarterback all have in common? They’re all going to be at Dordt University on Friday.

Starting at 8:30 a.m., Dordt will host the GameChanger Christian Sports Summit, an event that is meant to help athletes and coaches learn how to live more Christ-focused lives within athletics.

At the Christian college located in Sioux Center, faith and athletics go hand in hand, and according to the event pamphlet, the clinic is a “Christian sports summit to equip and inspire current and future athletic directors, coaches, and teachers in faith leadership.”

Each of the speakers will touch on different subjects regarding faith in athletics. Metcalf will discuss the topic of “Christian athletics in a competitive world”, while Huard will talk about the subject of “Accountability.”

“The speakers are going to talk about using their platform of sports to promote Christian behavior,” event organizer Craig Stiemsma said. “In our world of 2021, we think that it’s important to be able to use your platform and talk about your faith. A lot of the speakers have had lots of different successes while being Christian. The main impetus is, how do we do sports from a Christian perspective?”

To Stiemsma, approaching sports from a Christian perspective could be something as simple as enjoying an amazing play, even if it is made by the opposing team, or feeling comfortable about speaking on your faith in an athletics setting.

“It’s trying to practice your faith on and off the field, and in how you behave,” Stiemsma said. “To simplify it, not just praying or acting kindly, but to show your faith.”

According to Dordt head track and field coach Nate Wolf, there seems to be an idea that at Christian colleges, the athletes don’t want to compete as hard as at other schools. He is out to disprove that theory, but he also recognizes that things are different for athletes at a Christian school vs. a secular school.

“I think that is a fallacy,” Wolf said. “We compete just as hard, and the other side is also understanding that it needs to be a little bit different. Identifying success as only what the winning outcome is, did I get first or second?”

“That’s not the most important thing. (It’s) the way that we go about how we compete, the effort we put forward in the work that we have.”

Wolf will deliver the kick-off devotions at Friday's event, which will feature time for networking and refreshments, and will have breakout sessions with different speakers giving lectures around campus.  The clinic is set to end at 4:30 p.m.

“Part of Dordt’s mission is to try to be transformational within the world,” Wolf said. “We feel like, from an athletics standpoint, that is an area within the world that has been overlooked within Christian culture at times. The Defender way has been born out of that, and that is our Dordt athletic department mission statement.”

Registration for the clinic costs $150 for professional attendees, while the student cost is $60. 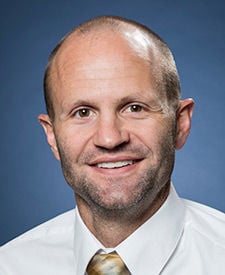