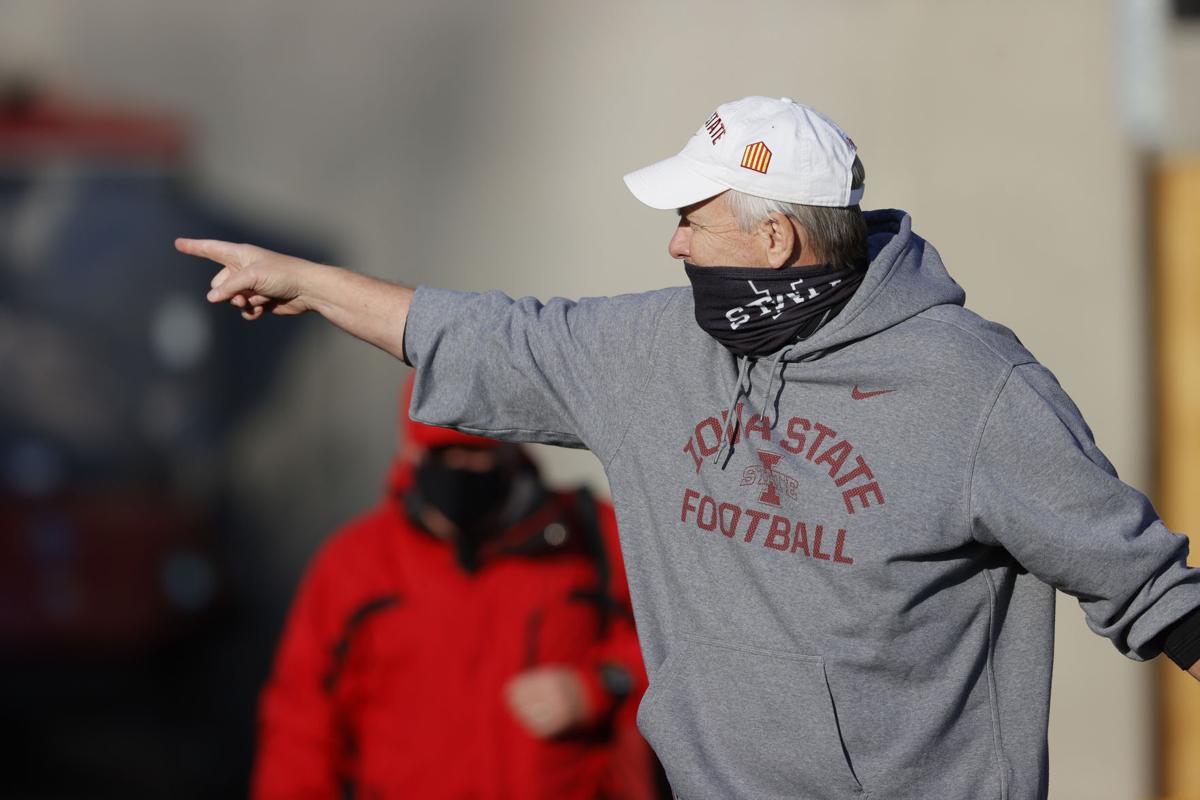 Iowa State defensive coordinator Jon Heacock points to someone in the stands before an NCAA college football game against West Virginia, Saturday, Dec. 5, 2020, in Ames, Iowa. 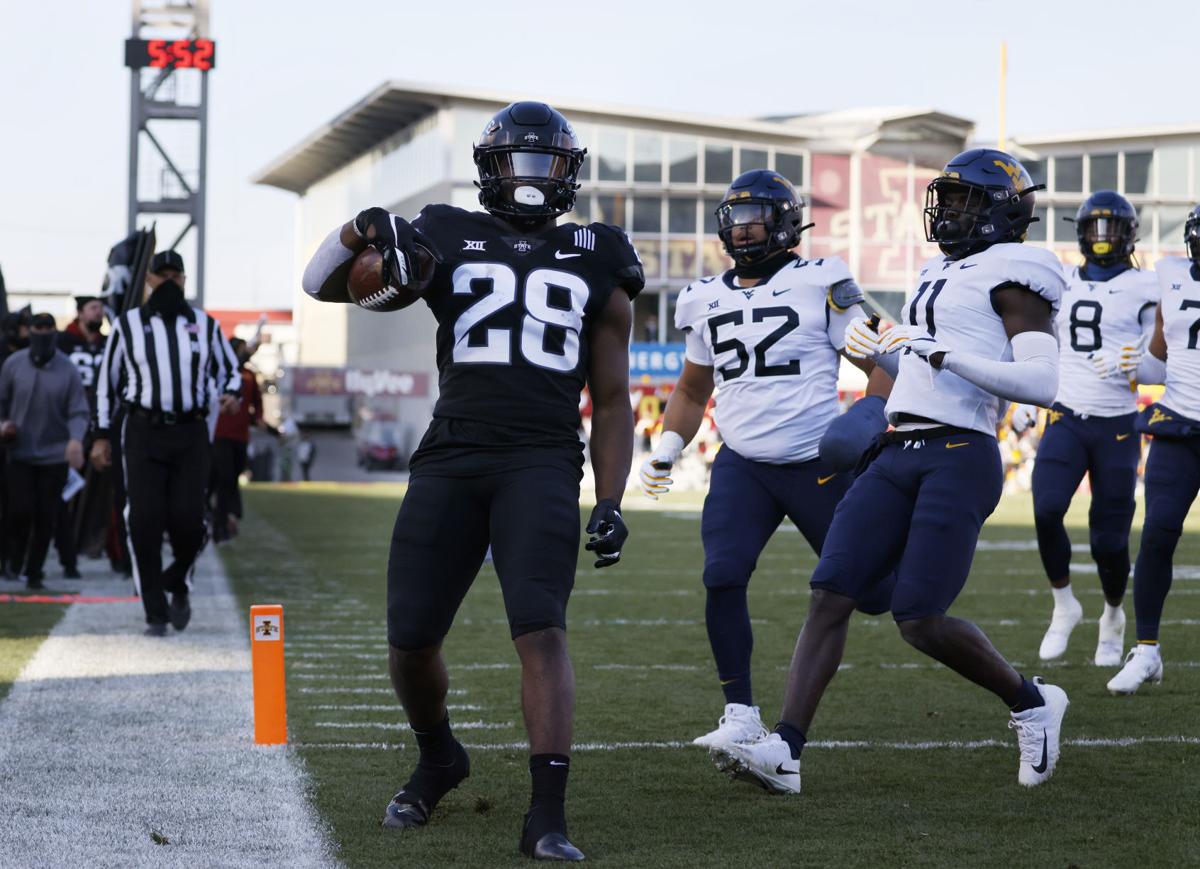 Iowa State running back Breece Hall, left, runs in a touchdown as West Virginia defensive lineman Jalen Thornton, center, and cornerback Nicktroy Fortune, right, are late to the play during the first half of an NCAA college football game, Saturday, Dec. 5, 2020, in Ames, Iowa.

BEN VISSER For the Journal

AMES — After a loss to Texas In 2017, Iowa State defensive coordinator Jon Heacock sat down with his fellow defensive position coaches.

Heacock’s traditional 4-3 defense that he’s run his entire career wasn’t working in the Big 12. He threw out everything he knew, including his playbook, and he and his defensive staff developed a whole new defense that had three defensive linemen, three linebackers and three deep safeties.

That change turned around Iowa State’s defense from one of the worst in the Big 12 to one of the best.

Fast forward a couple years and after a loss to Notre Dame in the Camping World Bowl, coach Matt Champbell sat down with his entire staff in January.

The Cyclones would win seven or eight games but that seemed to be all they could muster. While that's historically very successful at a place like Iowa State, Campbell wanted more. He knew he could get more out of himself, his staff and his players.

He and his staff threw out everything they knew and did and went back to the drawing board.

The changes they made, albeit small and not readily noticeable to the public — the changes aren’t as obvious as taking out a defensive lineman and putting in a third safety — have been impactful.

Because of the changes, Iowa State was able to go from good to great and Cyclones finished first in the Big 12, going 8-1 in conference.

“I think it started in January and I think we all, starting with coach Campbell, put aside the concepts of what we did before where this was how we had always done it,” defensive coordinator Jon Heacock said. “And he, with his leadership, said we have to change. We have to do things differently. I give him all the credit. I think he’s been absolutely incredible as a leader in a tough time.

“I think it was the ability to say, ‘This isn’t working.’ Just as we did on defense a few years ago. The idea of, ‘Yeah, but this is how we’ve always done it.’ That didn’t count. We cleaned the slate and started over. He’s the guy that started the whole thing.”

They changed everything from how they practiced, to how they structured team meetings to how they took suggestions from players.

“A lot of it has been the willingness to listen and understand the input he players might have,” safety Greg Eisworth said. “It’s hard because our coaching staff is great and they’ve had a great deal of success and they’ve been doing this for a really long time.

“I’m sure it was hard for them to change philosophies or take to heart what the players are saying. Even for us players, we had to understand where they were coming from. The humility to have those conversations from coach to player and player to coach was huge.”

Campbell has reiterated time and time again throughout the season that the changes that were made happened because people, including Campbell, put their ego aside so they could all have one clear vision.

“It was important so we could all move forward, together, in the same direction,” Eisworth said. “There was never anything bad. It was just, ‘How do we go from good to great?’ We were trying to nitpick and find those little areas where we can do that. With coach Campbell having a lot of those conversations with other coaches and the players — it was all of us getting on the same page and seeing where we can improve at as a team. I think that’s helped us tremendously down this stretch.”

Right after they decided to make the changes in January, COVID-19 shut everything down.

Campbell and his staff were about to enter the unknown with a completely new direction of the program. They could’ve easily gone back to the familiar.

“We made a lot of changes in what we were going to do and then all of those changes had to carry into March 13 and we carried through with them,” Heacock said. Change isn’t the issue. Trust is the issue. We changed defenses a couple of years ago. The change wasn’t the issue, it was the trust factor. Do we all believe in it? Yes.

“We came back in January and we had to change. Great. There’s a trust factor there. Good. We’re going to go with what Coach says and we’re going to trust he’s going to lead us in the right direction. And he trusts that we’re going to follow through with what he believes in. That’s the real thing that has to happen when there’s change, and that’s trust. I think trust within a staff that has continuity is priceless.”

While the things they changed were relatively small, taking the season as a whole, the changes proved to be effective as Iowa State is having its best season ever.

“I think sometimes we get stuck in a rut in football, especially,” Campbell said. “You're kind of doing the same thing over and over again and you're almost fearful to make changes — hard changes, because you see some success in what you've done. And yet, I think in some ways, at least myself, our staff and the leadership of our players, you're always trying to find a better way to do it.

“Just in terms of even how we practice, how we train, how some of the meetings are scheduled — all the little things that serve our players so they can be their best, and they can have the absolute best experience that they possibly can have. That's my mission. That's been my mission from day one.”

Northwestern's Rotert leaning on upperclassmen in first season as coach

The Morningside Mustangs went on an 8-0 run in the middle of the third quarter that helped them beat Northwestern 81-63 on Wednesday night inside the Allee Gymnasium.

LINCOLN, Neb. — The names change, but the pattern stays the same.

The Red Raiders return to Sioux City to face Morningside, who isn’t afraid to shoot the ball from anywhere on the floor.

'He puts in the work:' Van Kalsbeek has career day for Northwestern against Bulldogs

ORANGE CITY, Iowa — For Alex Van Kalsbeek, there is no such thing as a sophomore slump.

In a newspaper interview, John Stockton claimed without evidence that more than 100 professional athletes have died after receiving the COVID-19 vaccine.

Rylee Gray — the Elkhorn South grad who was part of Nebraska's top-ranked 2021 recruiting class — is medically retiring from the Husker volleyball team after one season.

Iowa State defensive coordinator Jon Heacock points to someone in the stands before an NCAA college football game against West Virginia, Saturday, Dec. 5, 2020, in Ames, Iowa.

Iowa State running back Breece Hall, left, runs in a touchdown as West Virginia defensive lineman Jalen Thornton, center, and cornerback Nicktroy Fortune, right, are late to the play during the first half of an NCAA college football game, Saturday, Dec. 5, 2020, in Ames, Iowa.